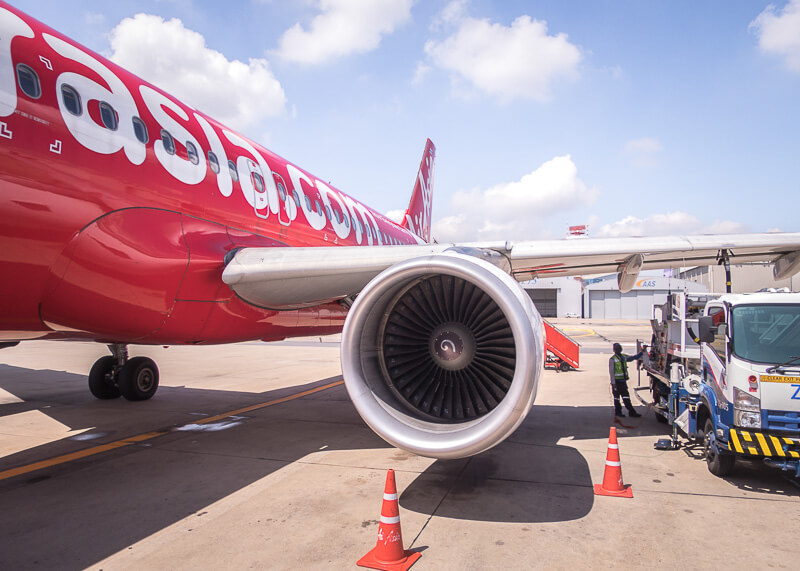 After booking flights to go to Penang after our Cambodia trip, we decided at the last minute to continue our journey to Mandalay! If you want to know what made us change our mind, read the previous post about how we met an Aussie couple who convinced us to go.

A little bit of a backstory on Mandalay

We booked this flight to Mandalay while we were still in Canada but by the second month of our travels, we decided against going to Myanmar. During our time in Chiang Mai, we rearranged our whole trip to remove the month that we were initially supposed to spend in Myanmar. And yet, four days before leaving Cambodia, we flipped a coin, and that coin told us to go.

So, after spending a sleepless night in DMK airport, we got on our flight to Mandalay in Bangkok and was stunned that it was a full flight. There were Thai people, British, Aussies, European and of course, the locals on our plane. Before this trip, I realized that I have never even met a Burmese person, despite living in a multicultural city like Toronto and having done quite a decent amount of travelling in Asia.

Once we arrived at the airport, we did the most important thing – buy a SIM card

To avoid the hassle of worrying about transportation, we arranged for an airport transfer with the hotel

The ride to the hotel was long; a whole 40 minutes of a nauseating ride thanks to the driver’s frequent starts and stops. The drive from the airport to the hotel was very bumpy, which was weird because the roads seemed well maintained. It felt like the car had a flat tire. At one point, we were worried about hitting another car because of those starts and stops. Not fun at all. At least the drivers wear a seatbelt and don’t talk on the phone. Which brings me to my next point – I was shocked at the well-paved roads and the numerous cars in Mandalay.

Given what I hear from the news, I was expecting a very… rural image of Mandalay 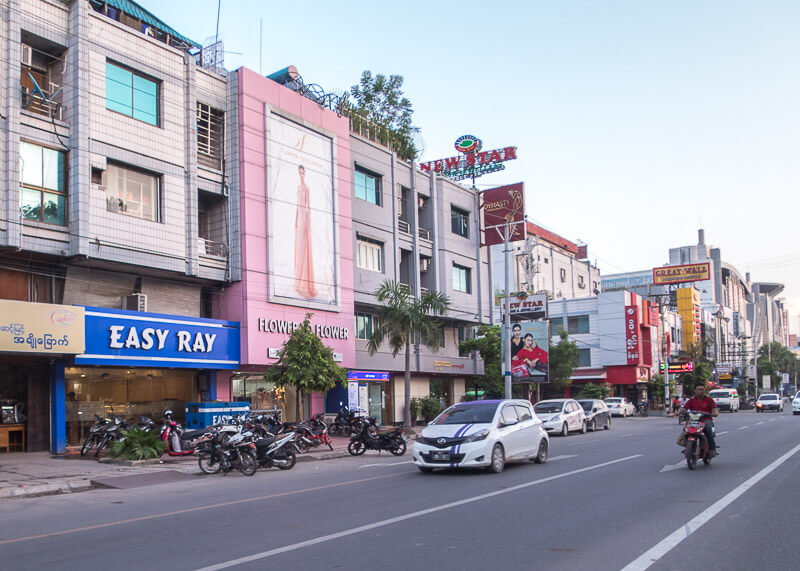 Mandalay was not what I imagined it to be…

But the drive proved otherwise. Unlike most countries in Southeast Asia where motorbikes outnumber cars, it’s the opposite situation in Mandalay. Cars dominated the road, followed by motorcycles and the occasional horse carriage. We even passed by a cow walking alone on the highway at one point. We went through quite a few roundabouts and were impressed that the roads were better maintained and cleaner than Siem Reap.

Once we arrived at the hotel, it was time to find food

We discovered very quickly that despite seeing well paved and clean roads, walking was cumbersome. Construction was EVERYWHERE; inconvenient to walk, but signs of a growing city. While walking towards a restaurant, the road was the only option for walking since people were in ditches digging in sidewalks. Actually no, it wasn’t just the construction that forced us to walk on the road, but an insane amount of bikes and cars parked on the sidewalk. That was super stressful since there were SO MANY cars and crazy motorbikes just inches away from you as they drive through the streets. They don’t stop for you at all.

As we made our way to the restaurant, every person stared at me each time I passed by them

I’ve seen that look before. The staredowns were similar to when I visited a small rural area in Vietnam. I was the first tall, white (literal translation here) and plump girl they’ve ever met with braces (or rail tracks, as they would call it). Except for this time, I didn’t have braces

After spending 20 minutes walking to the restaurant, I was so overwhelmed with dodging traffic that I no longer wanted to walk back to the hotel

The refusal to walk was a big thing for me because I love walking. Instead, we arranged to have a tuk-tuk pick us up. I had enough with being squeezed between a parked car and a speeding car. Cars, motorbikes, and tuk-tuks don’t slow down either, so it’s common to see locals running for their lives when crossing the street.

The drivers are aggressive in Mandalay 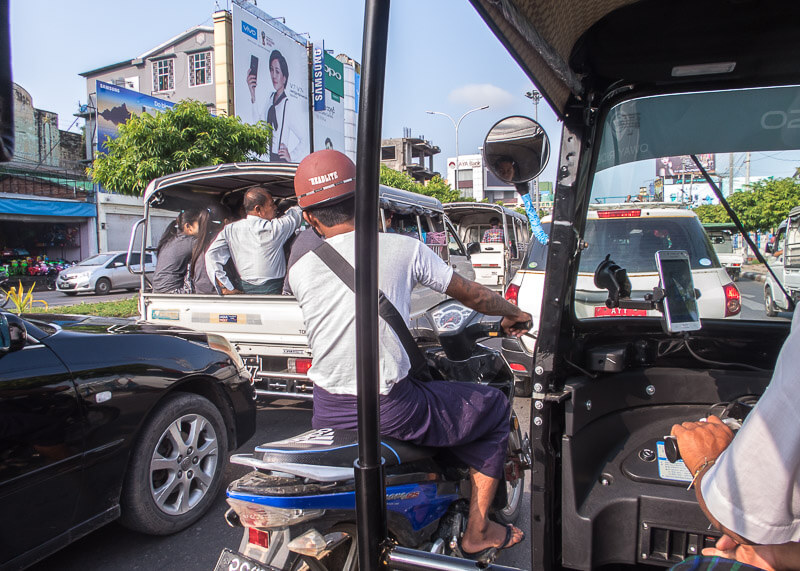 I’ve been to China, Bali, Thailand, and Vietnam where drivers are nuts. The Mandalay drivers would give them a run for their money. At one point, a bike almost ran into us because they did not see us coming. It was our right of way.

There’s a lot of noise pollution in Mandalay

Everyone is honking every few seconds. Lots of bikes were continually swerving in and out of lanes and would honk to announce their presence. 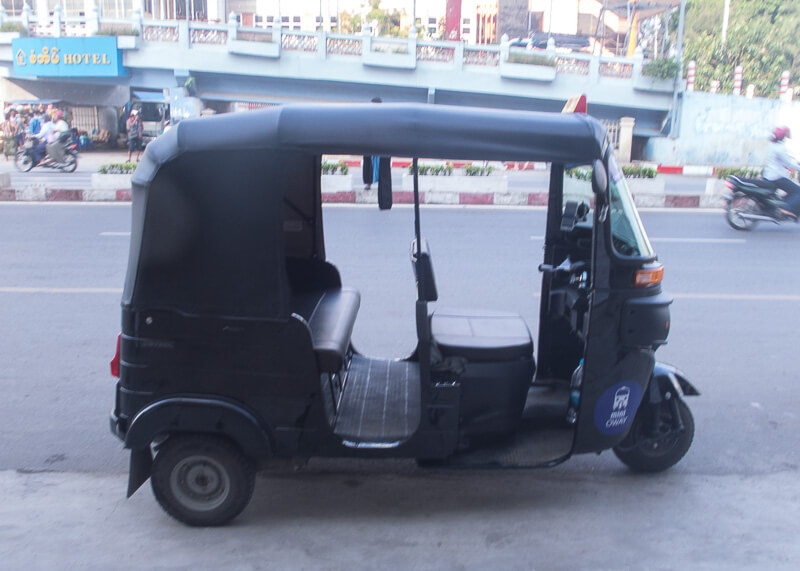 The tuk tuk that took us everywhere in Mandalay

Our Mandalay hotel was one of the best budget hotels 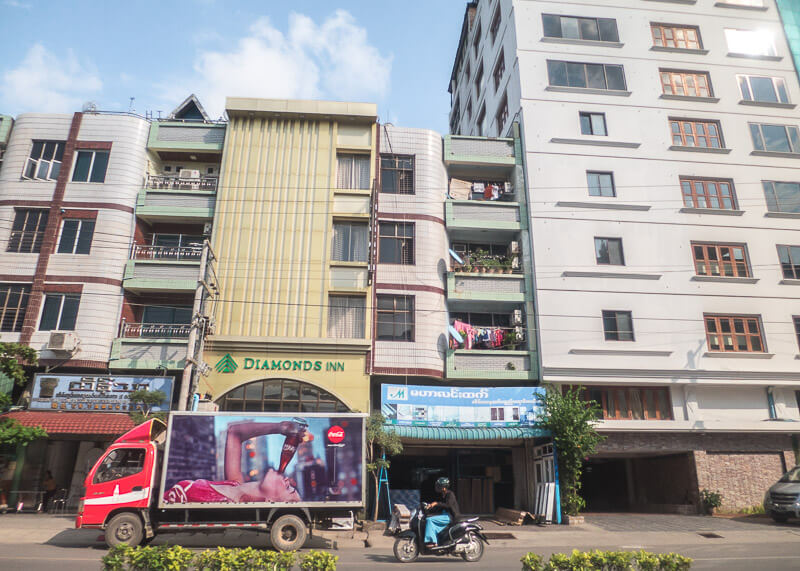 Diamonds Inn, one of the best budget hotels we stayed at during our year of travelling. Of course, a large Coke truck is blocking the entranceway (NO this photo is not sponsored by Coke!)

Their hospitality was one of the most genuine I’ve ever experienced, and our hotel room was pretty good for the price. The room was bright and immaculate. There were no bugs, and there was hot water for a warm shower. They also served a very delicious breakfast and came by every night to offer fruit.

We spent our first day in Mingun, which is a small town that is reachable only by boat

Mingun is one of many incredible day trips that you can do from Mandalay. It was a full house on our boat! 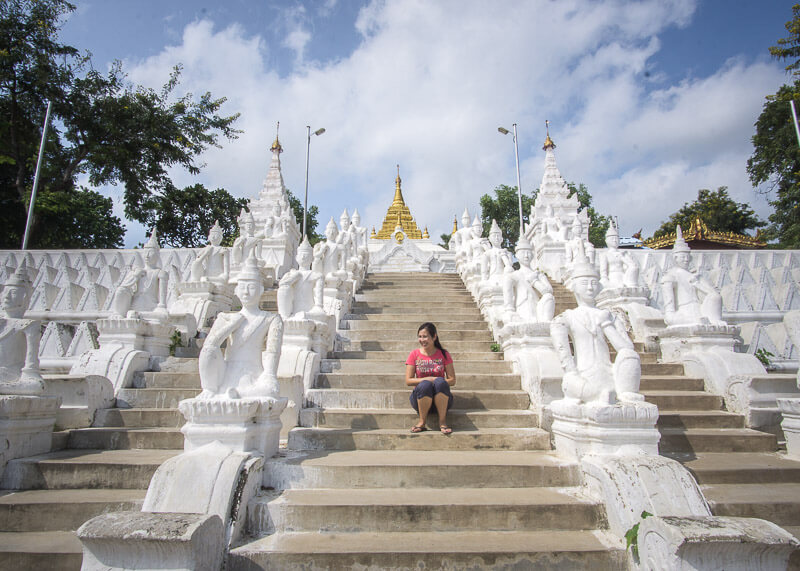 Mingun was oh so hot but oh so beautiful 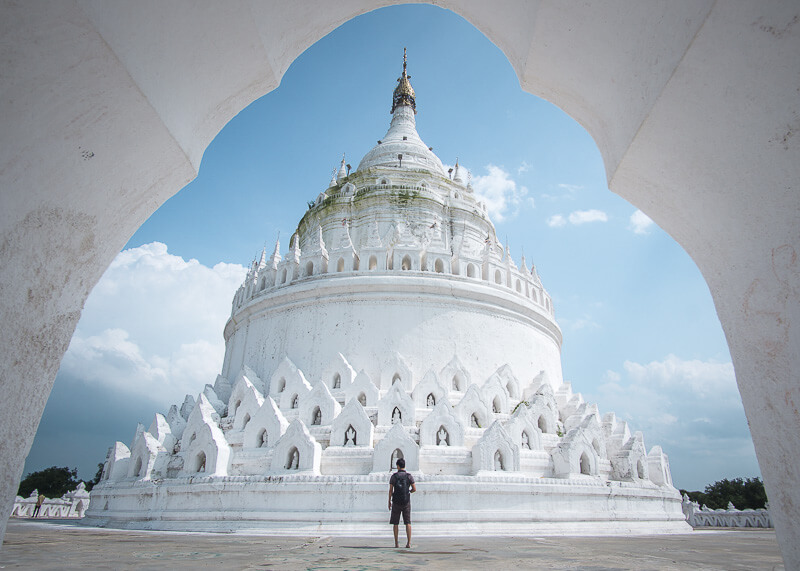 We spent 10+ hours sightseeing Mandalay the next day 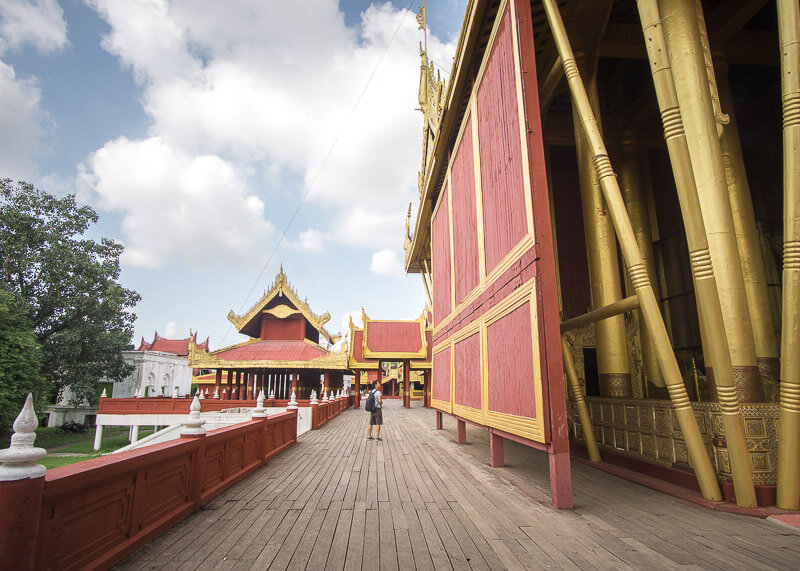 Started the day at Mandalay Palace 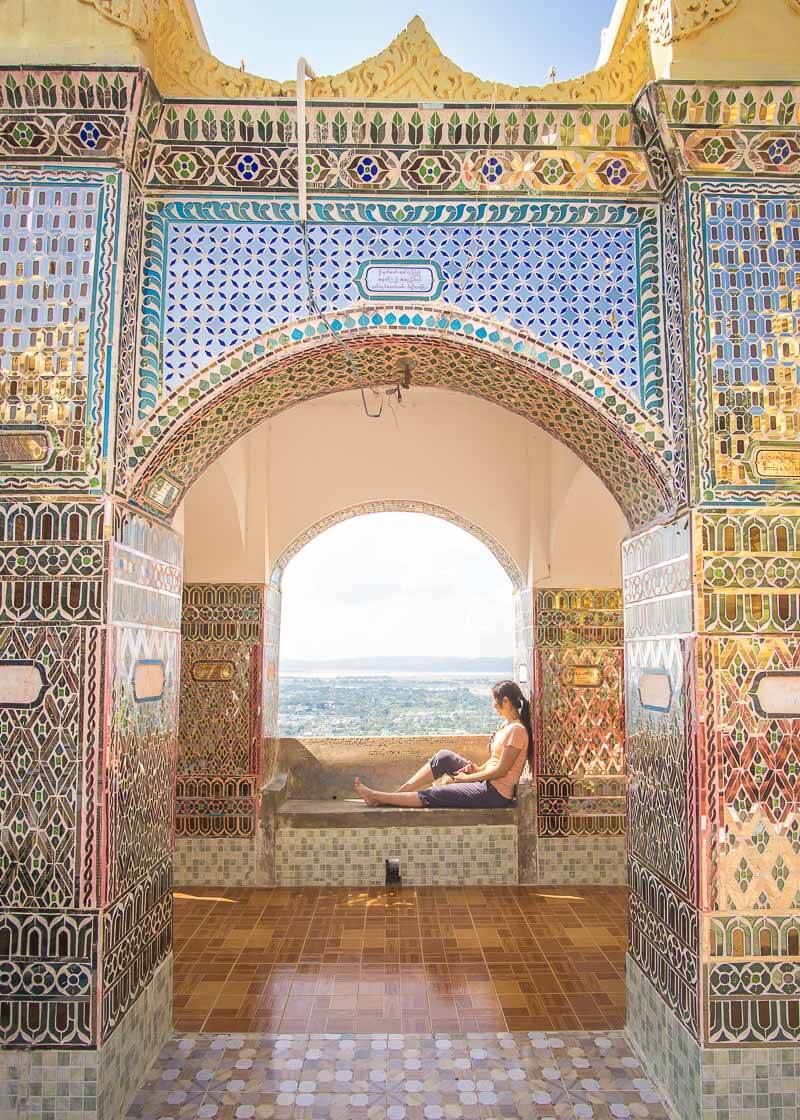 Made the long and hot climb up to Mandalay Hill 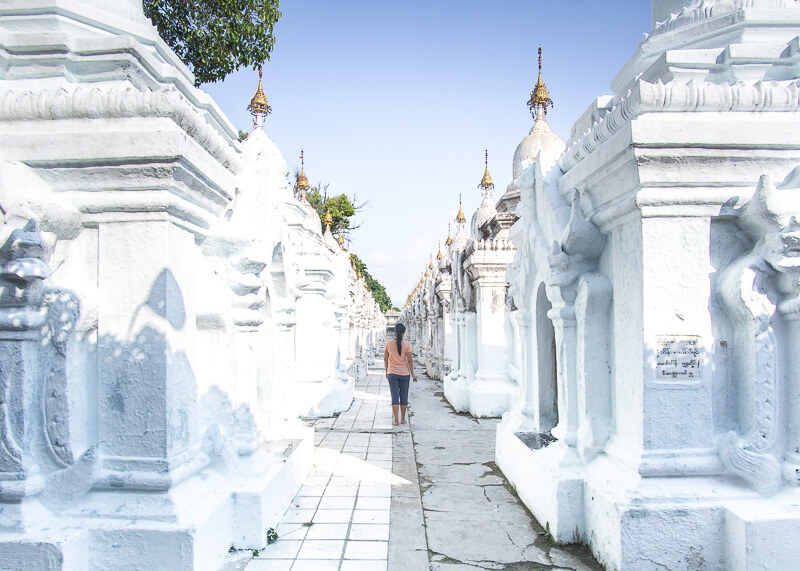 Walking through the world’s largest book at Kuthodaw Pagoda

That was very tiring indeed. We spent the rest of the day visiting nearby pagodas but started to time out. We headed to the hotel for a quick 10-minute break (this was our lunch) and off we went to U-Bein bridge. 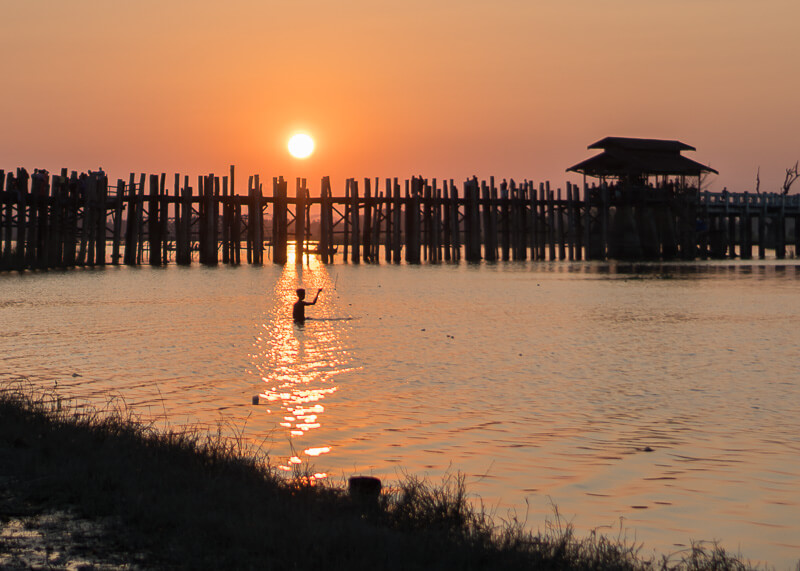 I had no idea what was so unique about U-Bein bridge. I didn’t think much of it until we spent an evening watching the sunset at the largest teak bridge in the world. Now I understand why it’s a must-see when in Mandalay 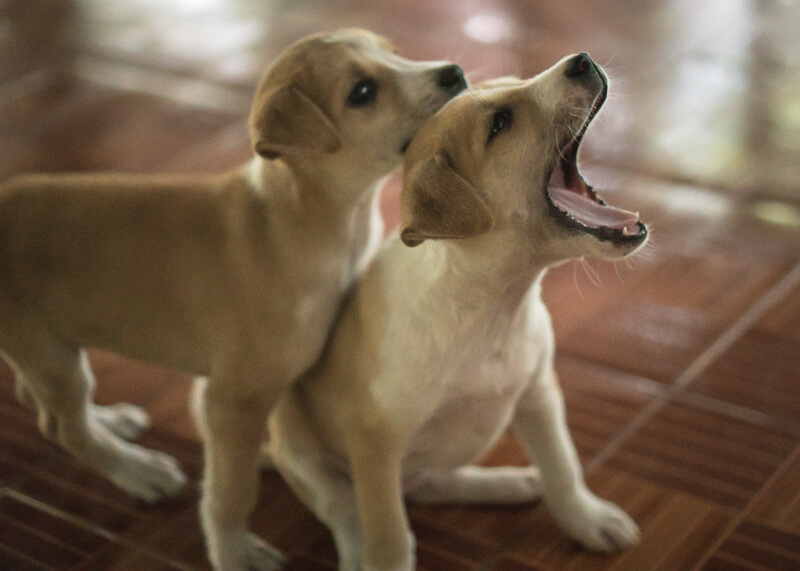 Adorable puppies are in almost every temple in Mandalay. They are also the reason why you need to watch where you step!

So the one thing about Mandalay is that you usually have to walk barefoot in temples. But, there can sometimes be crap on the floor. Monkey poo, dead earwigs, centipedes and dog poo.

Despite me warning Gary to watch where he was going, he got too distracted on his phone and stepped on dog poo with his BARE FEET. I died of laughter (what a great “I told you so” moment) while he hastily looked for the nearest washroom.

The food was a bit of a disappointment in Mandalay

So we ended up eating KFC while in Mandalay. I know, I know, we are terrible, but at least it was somewhat “local,” in that they served a unique curry rice dish. I didn’t enjoy the food which surprised me given how I LOVE khao soi. If you haven’t heard of khao soi before, it’s a Northern Thai noodle soup with Burmese influences. Ah well, maybe I didn’t order the right thing.

After a few days in Mandalay, it was time to see Bagan

The place we’ve all been waiting for and the main reason why I wanted to visit this country. 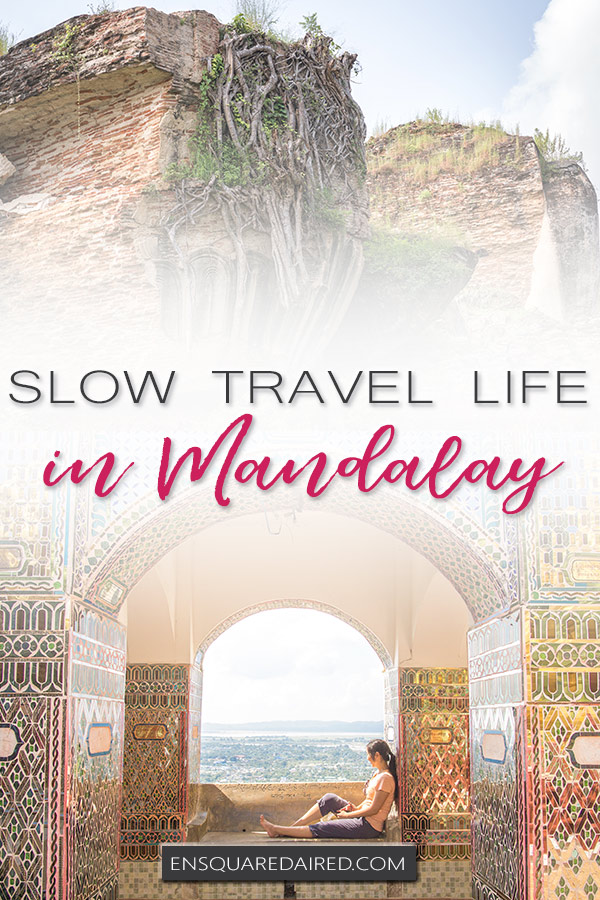 Previous Post: « 5 things I Learned During My Siem Reap Trip
Next Post: Is Grammarly Worth It? Read This 2019 Grammarly Review First »