You are here: Home / Destinations / 5 things I Learned During My Siem Reap Trip 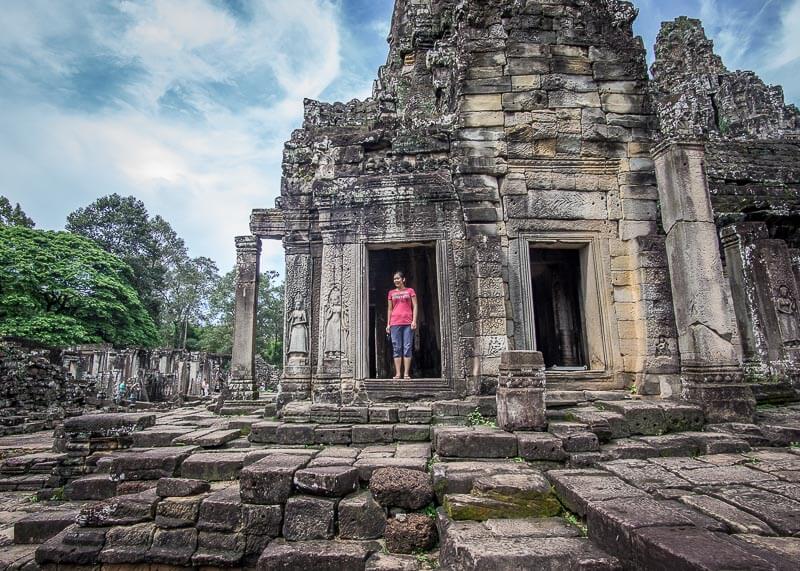 I’m sharing the things I learned about Cambodia based on my observations while I was in the country during the year where I lived a nomadic life. Seeing day-to-day life in Siem Reap and talking to different people was an incredible way to understand Cambodia in ways I would not have been exposed to just by reading stuff on the internet. Because we were in Siem Reap for a long time, we wanted to explore the city and see more than just Angkor Wat.

One of the reasons how we got to know some of the locals was because we kept going to the same restaurant every day. They were always so happy to see us – their faces would light up each time they saw us coming in, and every day, they would hopefully say “see you tomorrow!” The girls would cling to my arm with endearment the way two girlfriends sometimes do when walking.

It boggled my mind why they liked us so much. It could also be because we tipped a lot while in Cambodia but hey, it doesn’t matter either way. 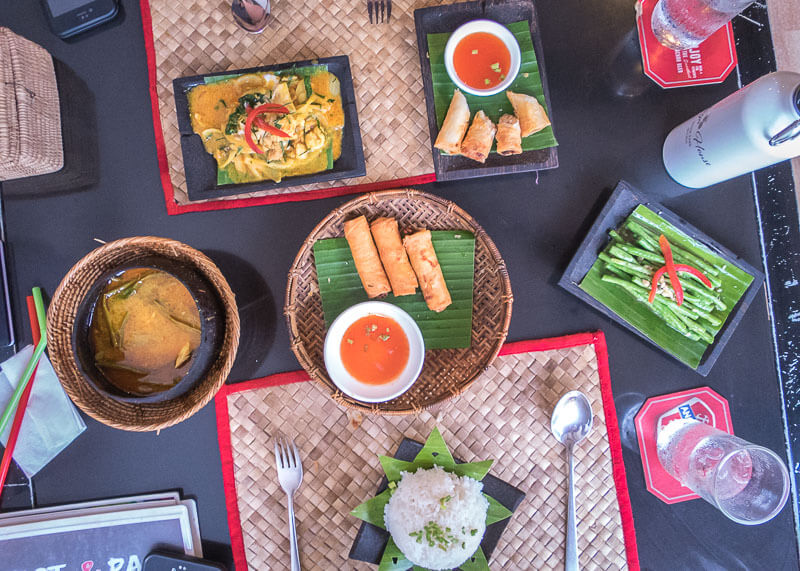 Our discoveries while in Cambodia went something like this:

We’d go to a restaurant and have a conversation with the waiter. They’ll mention something I did not know about in passing. Once we came back to our hotel, we would research and read about topics we would never have known about had we not been in Cambodia.

I’m going to share some observations that stuck out with me while I was in Siem Reap during my year of travels.

Psst: You should first read my Siem Reap post about my trip here.

#1: Most of the Cambodian population is very young

Something like 50% of the population is under the age of 25. That’s mostly attributed to the Khmer Rouge, a tragic time in the country’s history. If you are unfamiliar with Khmer Rouge, here is an article that will help you learn more about it. Have a box of tissue handy.

#2: There are a lot of social enterprises and NGOs in Cambodia, particularly so in Siem Reap

I always knew that there were quite a bit of NGOs in Cambodia but seeing them with my own eyes was a completely different experience. Almost every expat in Siem Reap was finding a way to give back to the community. 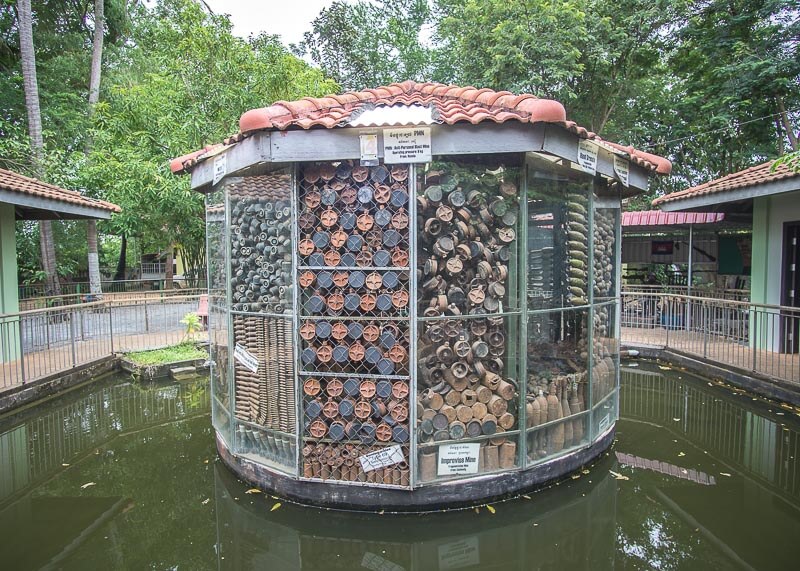 We made the trek to visit the Landmine Museum, which is worth visiting to learn more about the landmine issue in Cambodia 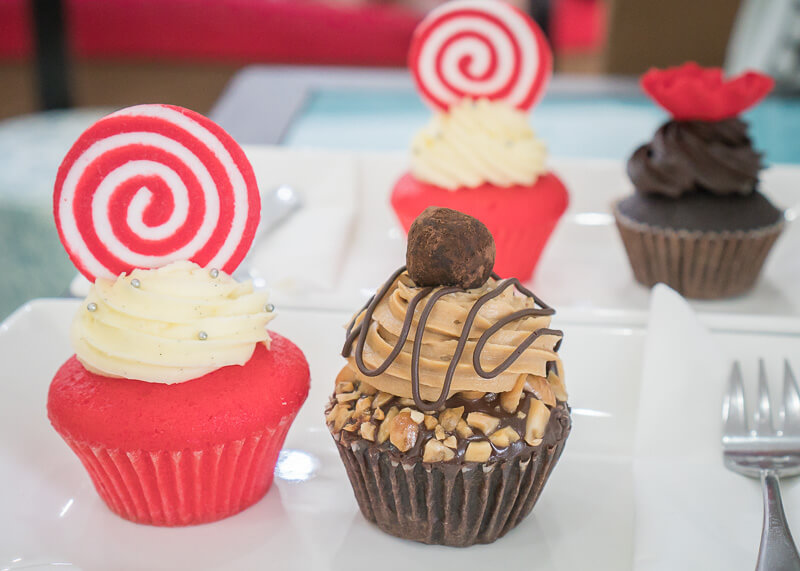 Yummy cupcakes made at the training center at Bloom Cafe, where they employ women and teach them transferable skills 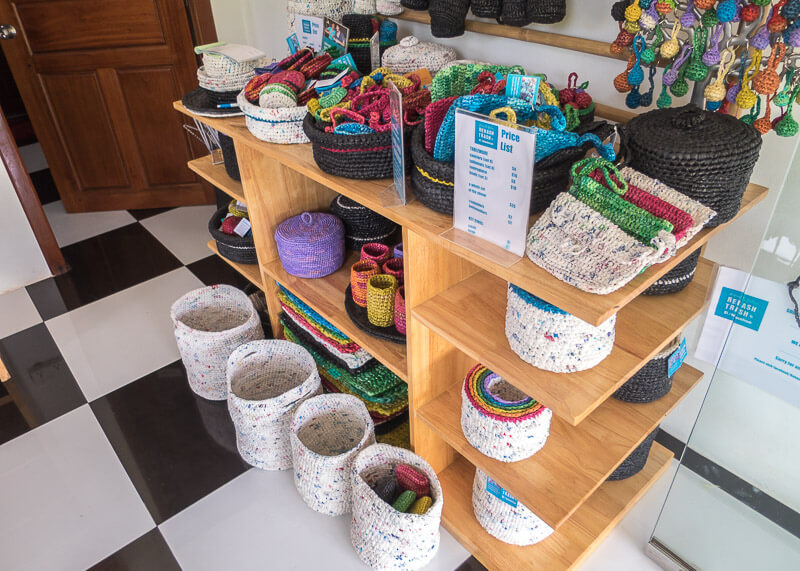 Rehash Trash, where they create reusable products out of plastic bags. This NGO works with women who have had some of the most unimaginably tragic lives. For most, they would be on the streets if it weren’t for Rehash Trash 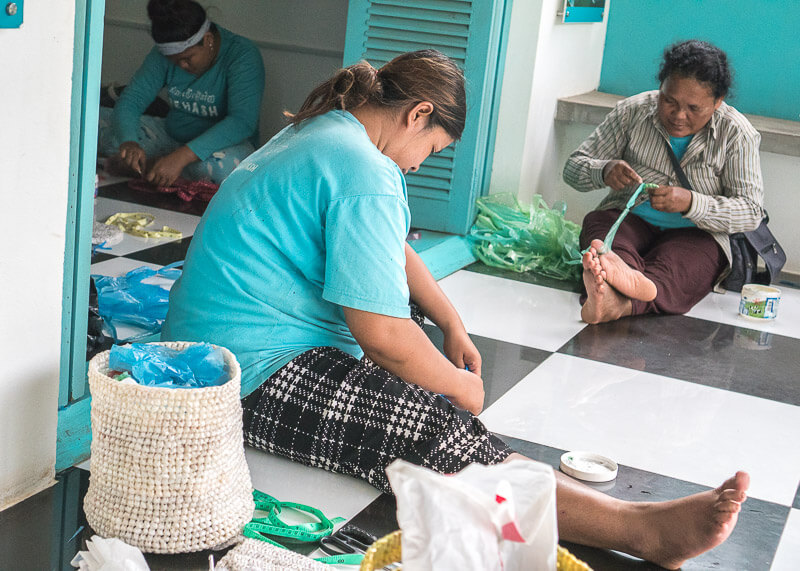 We visited the primary site of Rehash Trash, where we got to meet some of the women with the most incredible stories. Even our tuk-tuk driver was curious and took a tour around the facilities. He never heard of Rehash Trash before our trip. In fact, many Cambodians that we talk to aren’t aware of most of the NGOs in the city. That’s because they are too busy working and trying to survive… 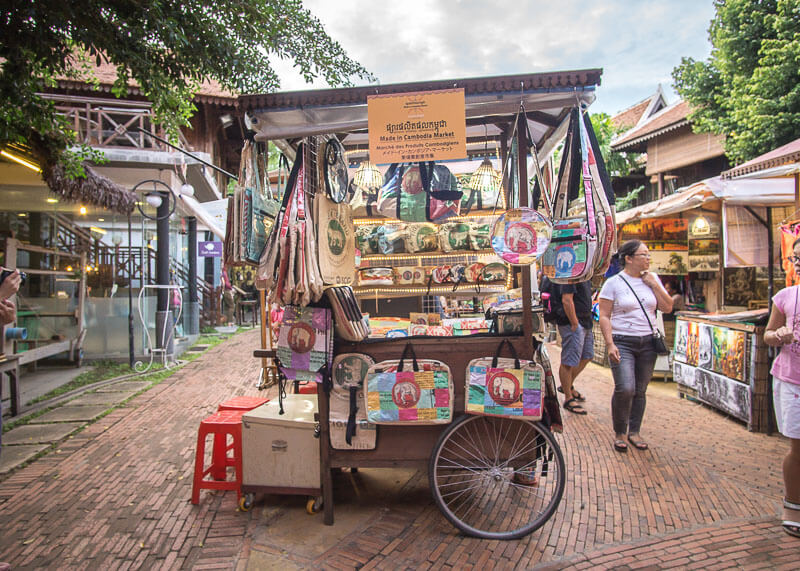 Stalls at the Made in Cambodia market

Of course, there’s always another side to the story when it comes to these NGOs operating in Cambodia. There is lack of structure and misuse of funds in these NGOs while the orphanage scam is one thing travellers should be aware of when volunteering in Cambodia.

#3: Cambodia has a close relationship with… Japan?

Another interesting thing we learned while in Siem Reap was that the Japanese have a close relationship with Cambodia. We only discovered this when we met a Japanese couple who opened a small dessert shop in Siem Reap. Many Japanese companies are investing in Cambodia, which has led to more Japanese restaurants, schools, and other businesses to support the Japanese community. In fact, some hotels (like the one we stayed at in Siem Reap) have Japanese tourists as their primary market. 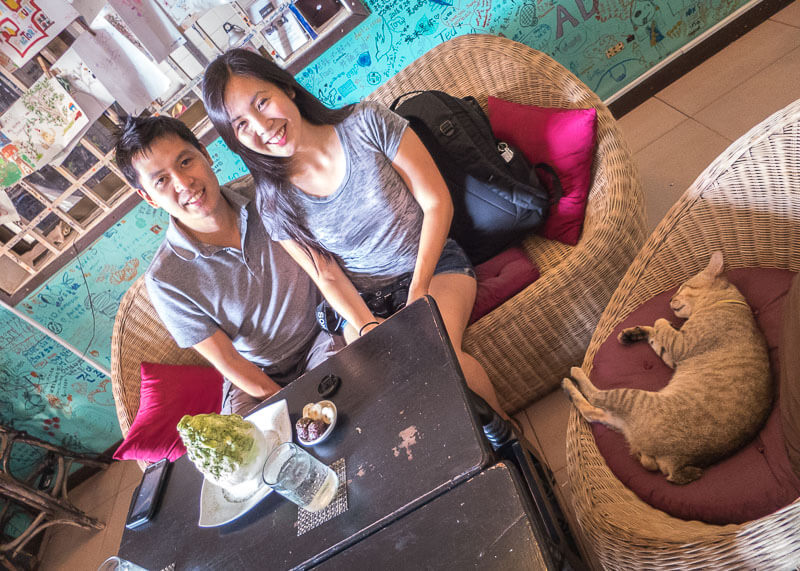 Us at the number 1 rated Japanese dessert shop in Siem Reap. I asked the owner if he could take a photo with his cute cat and this was how he included his cute kitty… 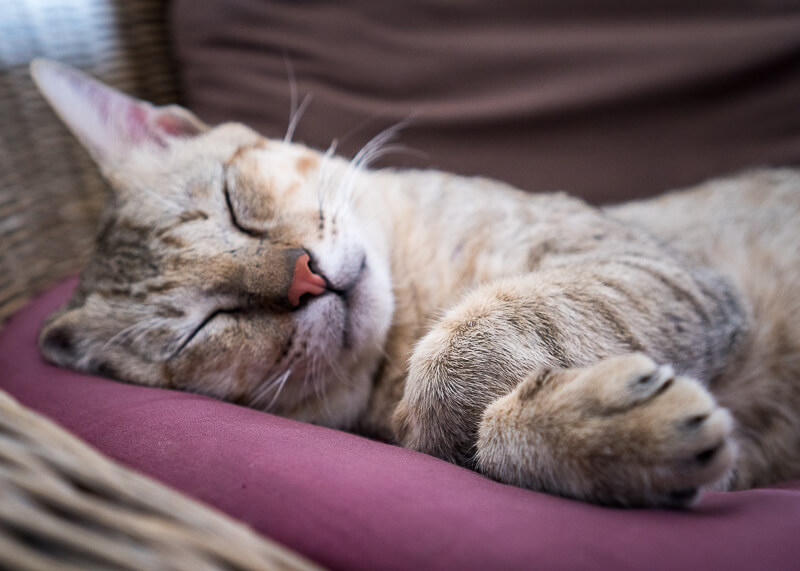 This cat could sleep through anything!

#4: Not all Asians age well

The whole “Asians look young” doesn’t always apply, especially in Cambodia. I don’t mean to point this out in a disrespectful way, but rather the fact that most people looked a decade older than their age because of the hardships they went through in their lives. I can’t tell you how many times I met someone who looked way older than me, only to learn that we were only a few years apart in age.

Life is so different for the people in Cambodia compared to the life I know in North America. We met one waitress who told us a bit about her life. The only time she’s ever been to Thailand was to take her mom for medical treatment. She ended up losing her job because her boss wouldn’t let her, so she had to quit. That was one of the most stressful times in her life because she had no job and had no idea what would happen when she came back to Cambodia. Luckily, she was able to find a job but we could tell it was a hard decision for her to make. She literally had to choose between her job and her mom’s health.

It was a very emotional conversation. And I had no idea what to say when she asked “Have you been to Thailand? What was it like for you?” As an Asian who was born in North America, my experience in Asia is vastly different than those who were born in less developed countries.

Talking to these people gives a very different perspective on life

For example, when I ask how their day off was like, they said they did nothing. All they did was sleep because they work so much.

Sometimes, I don’t know how to respond

I find myself not knowing what to say when someone shares how they’re still struggling.

Do we simply listen to them? Do we offer them money? That’s the Asian thinking in me because I feel like that’s what Asians do when we meet someone less fortunate than us.

What do we do? What do we say? It’s so crazy when you meet people who make on average $3 USD a day. 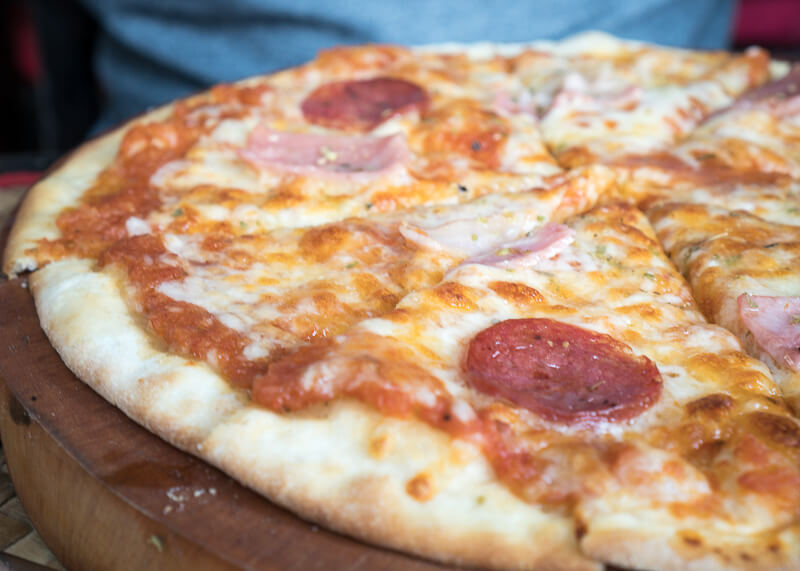 This humongous pizza costs $3 USD – good deal for us foreigner’s right? And yet, it is often a person’s daily wage here in Siem Reap

Not only are they barely making enough to survive, but they are likely sending money back to their family.

Without a doubt, this trip to Cambodia reinforced my global perspective on the world and life in general.

What other observations did you make during your time in Cambodia? Share your thoughts in the comments below. 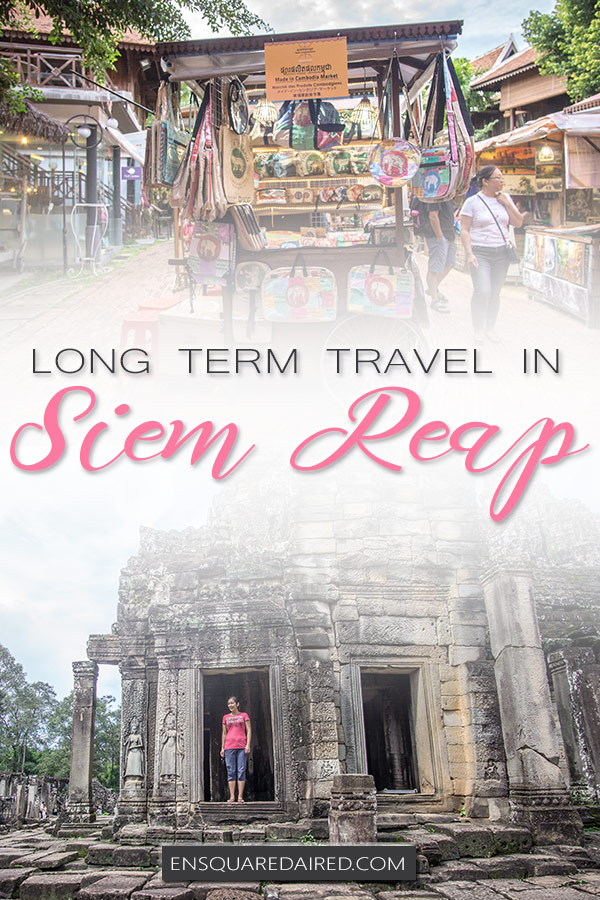 Previous Post: « The Most Heartbreaking Month Of My Nomad Travel
Next Post: Mandalay Travel Blog | Year Of Travel Diary »