You are here: Home / Destinations / Long Term Travel | Here Is What Living In Chiang Mai Thailand Is Like 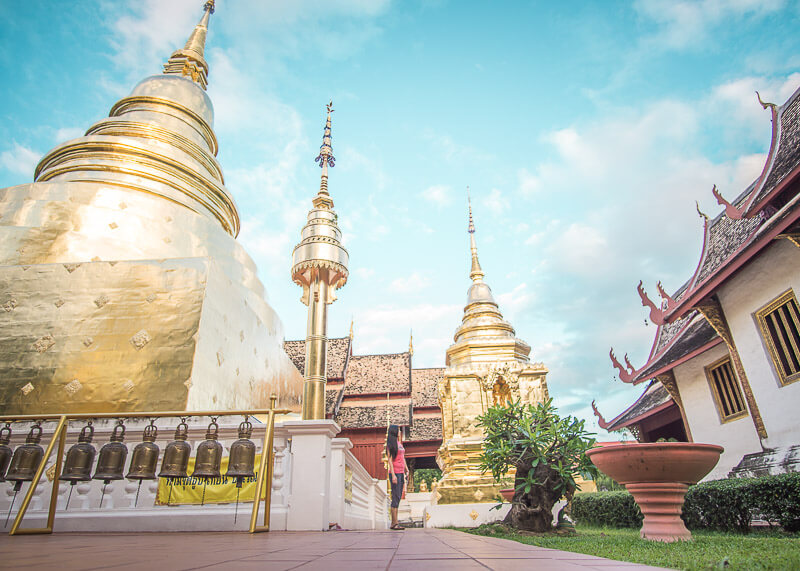 After over a month of travelling in Thailand and visiting smaller cities like Ayutthaya and Sukhothai, we were ready for a break. And for that reason, we planned to rest up in Chiang Mai for three weeks before continuing our year of travelling outside of Thailand.

Spoiler alert: We loved Chiang Mai so much that we ended up spending almost four months there during our year of travelling! This blog post is about the first time we visited Chiang Mai, where our plans were to spend only three weeks in the city.

Chiang Mai has a population of over 170,000 people and is Thailand’s fifth-largest city. Indeed, this place has a small town feel, but with so much more thanks to the temples, scenery, and history. I mean, this city was founded in 1296 CE, so you can imagine there’s quite a bit of history!

Because we treated Chiang Mai as our home away from home, we booked three nights in Smith Residence and planned to look for a cheap apartment for the remaining three weeks in Chiang Mai.

As I wanted to be in the Ninman area, we spent quite a bit of time visiting different apartments. We saw way too many places, to the point where they all started to look the same. While we did quite a bit of research in finding the right place, we realized how important it is to see the unit physically. Pictures are so deceiving – it doesn’t reflect the condition of the room, the noise level, or potential mould growing behind the walls. Gross, I know. 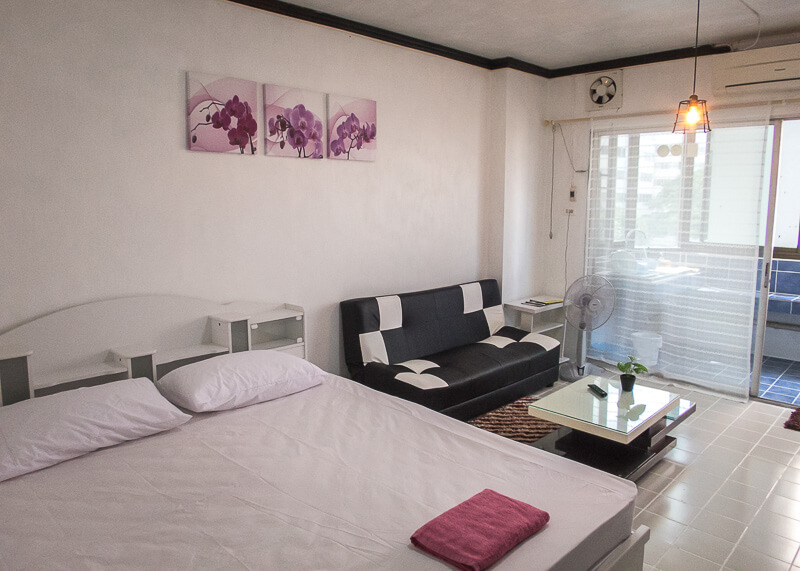 Hunting for a place to live in Ninman area. This condo was one of many that we saw during those few days

In the end, we decided to stay put at Smith Residence. It wasn’t the greatest, but it wasn’t the worst either. And for the price we were paying, we really couldn’t complain. 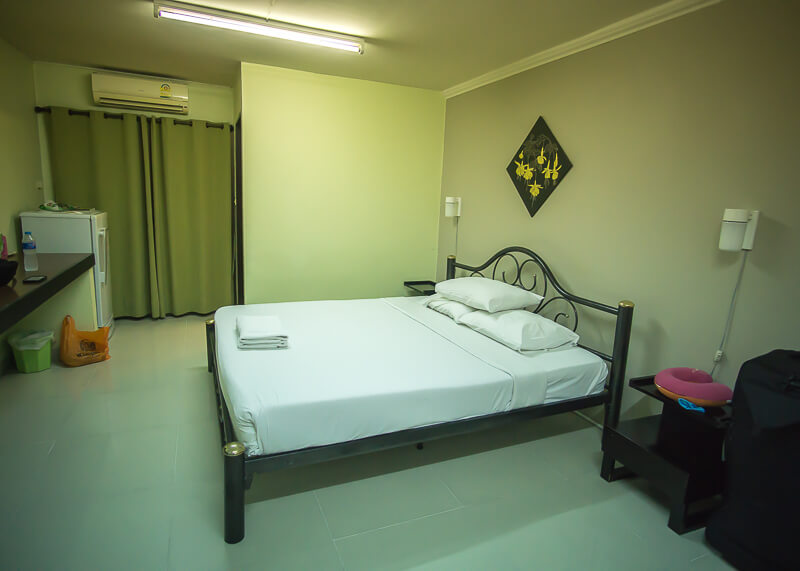 Smith Residence, a no-frills place that is under $25 CAD a night

Our days living in Chiang Mai Thailand were pretty simple 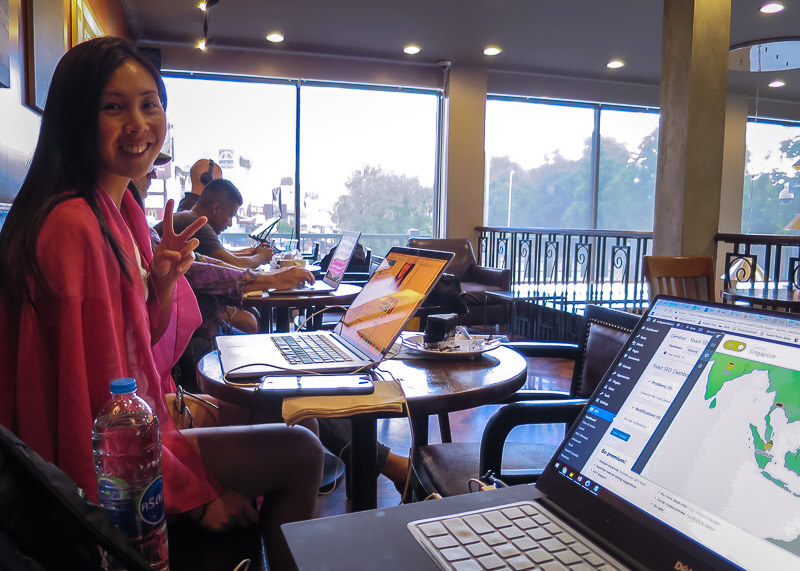 We used this opportunity to relax and catch up on things that needed our attention in Chiang Mai. Because we didn’t have a kitchen or a desk in our hotel room, we spent our days working at Starbucks before having dinner at Cooking Love. Our walks to the Starbucks near Tha Phae Gate were always scenic thanks to the many beautiful temples we’d pass by along the way. Every street we turned on was a new discovery. 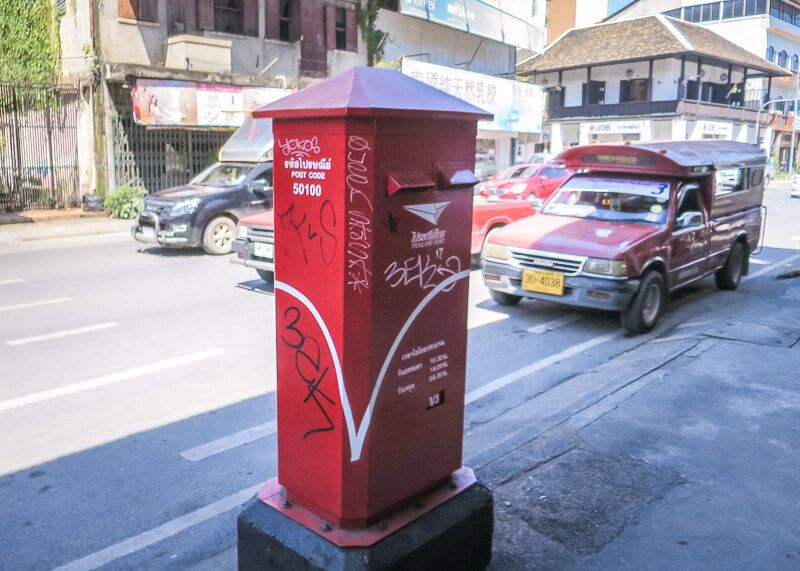 I took photos of everything and noted all the things that changed and the things that stayed the same since our last visit. Like the day I saw a mailbox and spent a good minute examining it. I didn’t realize locals were watching me until I heard them laugh at me when I was sticking my hand in the mailbox (don’t ask why I did that I’m just curious) 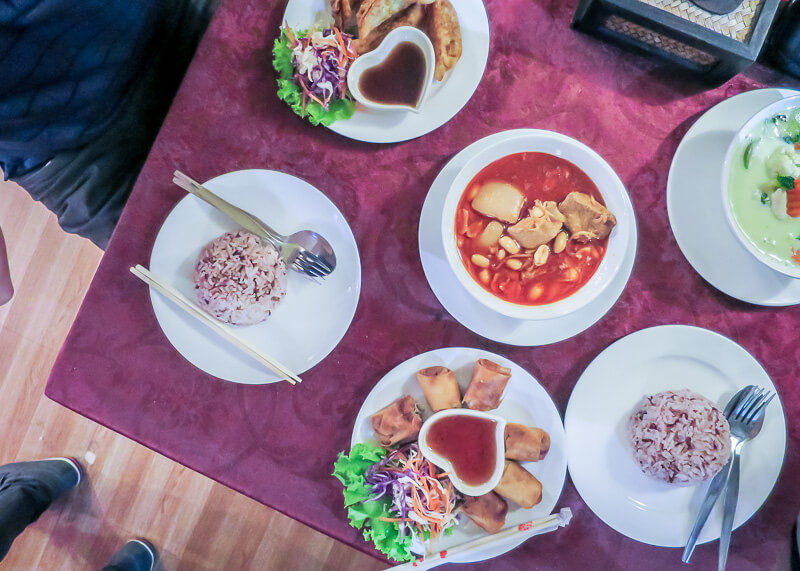 We ate at Cooking Love almost every day!

We spent so much time at Starbucks that the staff all knew my name. Whenever I walked in, they’d excitedly say “Sa bay di mai Nancy kaa?”, which means “How are you, Nancy?” 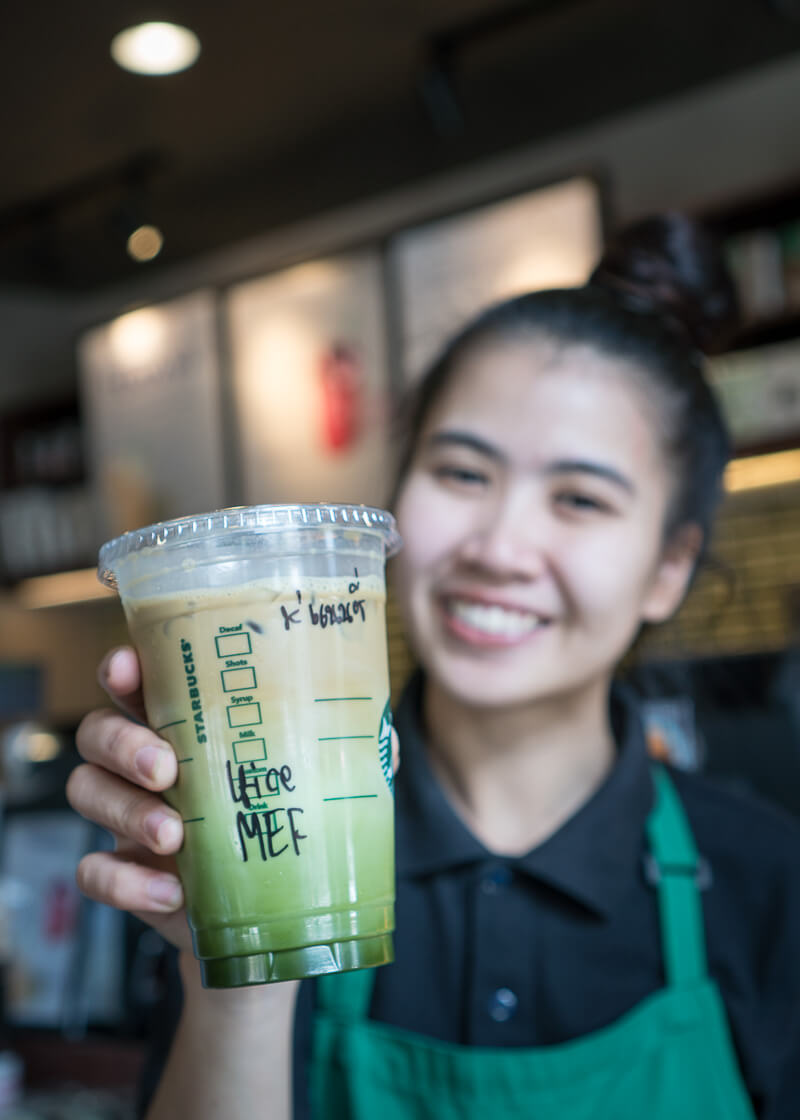 Lay is the sweetest, she knows that I only like a little bit of ice in my drink. They even wrote my name in Thai on my drinks!

Some of them are really funny. When I asked one guy what his name is, he said BOSS. I asked him how to spell it (I wasn’t sure if he was joking or not) and he showed me his name tag, which indeed said BOSS. 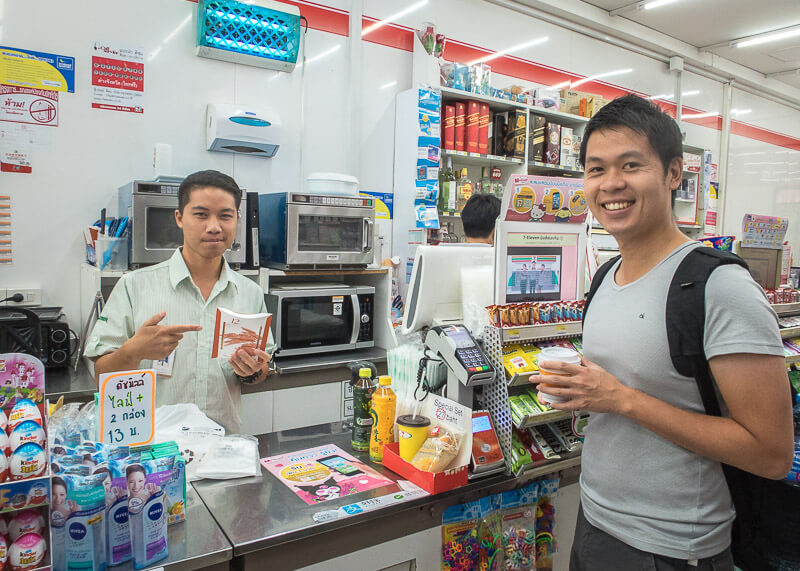 Gary would buy the same coffee and sandwich every day from the 7-eleven. Gary clearly needed a haircut at this point in our trip 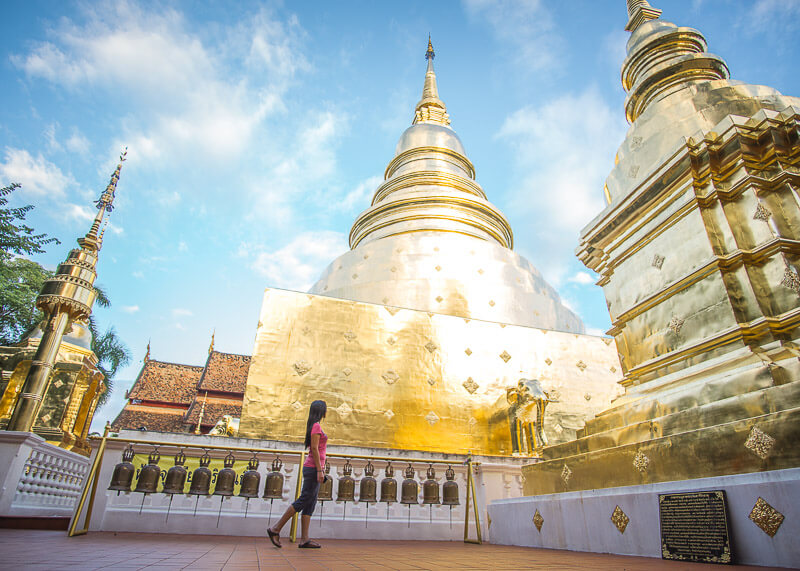 Back at Wat Pra Singh, one of my favourite temples in the city

My first visit to Chiang Mai was about fitting as many temple visits as possible and eating Chiang Mai’s street food. And to be honest, I felt like Chiang Mai was a bit boring to spend a week in the first time around. 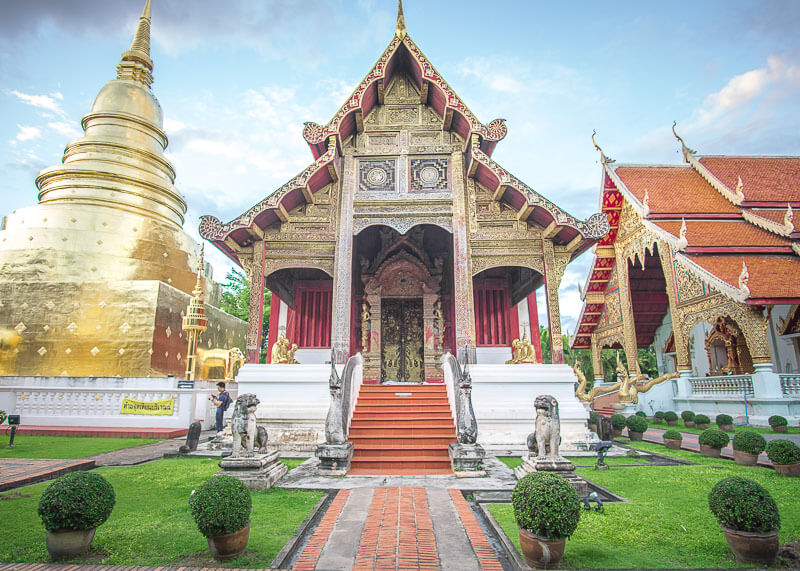 Oh Wat Pra Singh, you are so beautiful

But now that we are back as long-term travellers, there’s so much I appreciate about Chiang Mai. The city is so easy to live in and makes it very comfortable for foreigners to integrate into the day-to-day life. 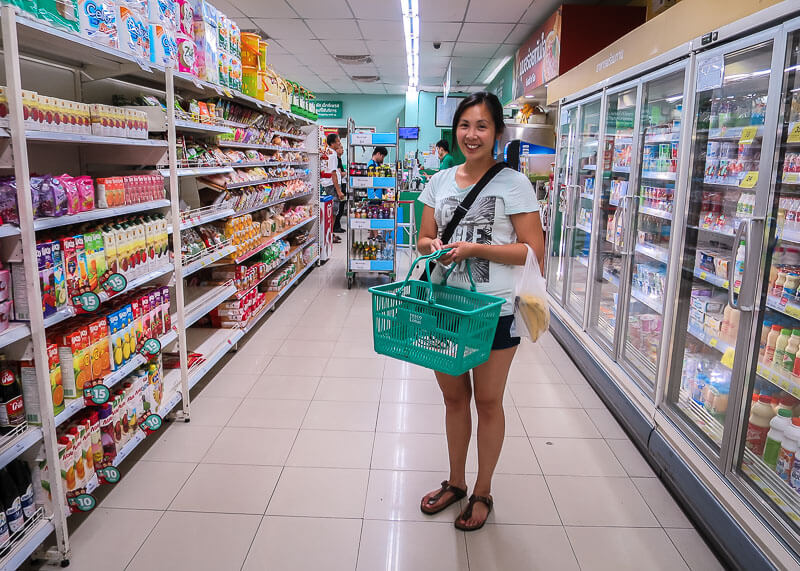 Grocery shopping for the first time in months since our travels! I really really missed running this simple errand. Can you tell I am a happy camper?

I must admit, I had many happy memories here the first time I was in Chiang Mai. For example, Chiang Mai was the place where I found myself again and started to think long and hard about how I want to shape my life. 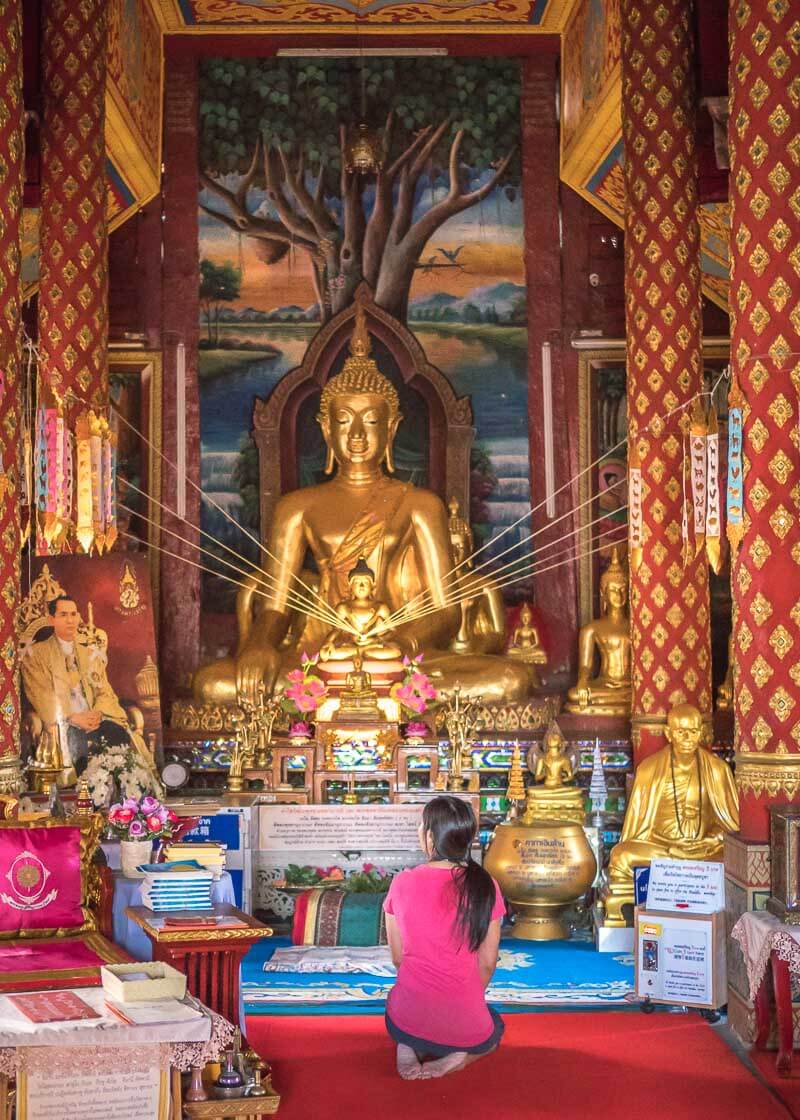 I feel very spiritual when I am in this city. Totally lost in the moment, without any clue that I have a creeper taking photos of me 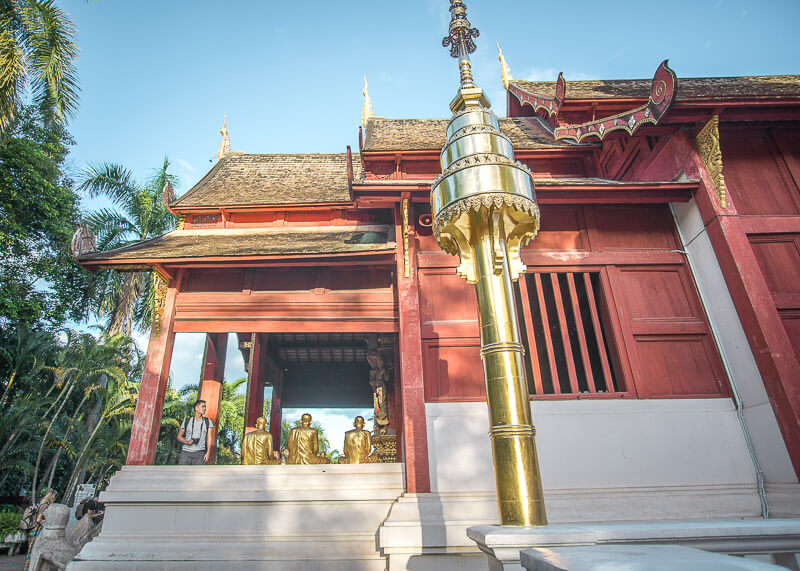 We stumbled upon a fantastic night market by accident just outside of Maya mall. The music was terrific, and the vibe was lively.

The market felt like a traditional night market, but with a modern twist. Almost all the vendors looked like young entrepreneurs who were serving delicious meals 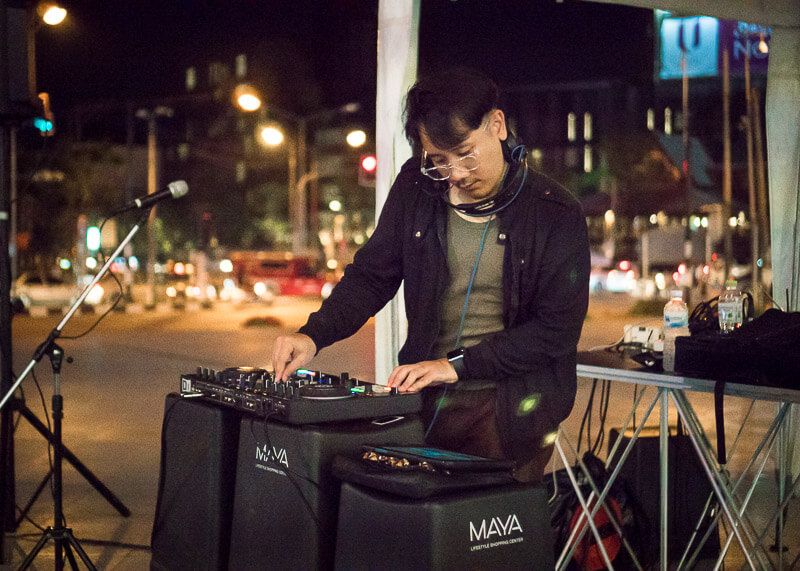 This market was by far the hippest night market I’ve been to so far in Chiang Mai. That’s the cool thing about living in Chiang Mai – we had the time to go and explore events around the city.

And Chiang Mai fed me well

I LOVE Thai food in Toronto and LOVE Khao soi. But Chiang Mai made that love for Khao soi deepen in ways I didn’t know possible.

Funny enough, it was Khao Soi Islam that brought us back to Chiang Mai. We loved that restaurant so much that we vowed to always visit Chiang Mai so that we can eat at this restaurant. 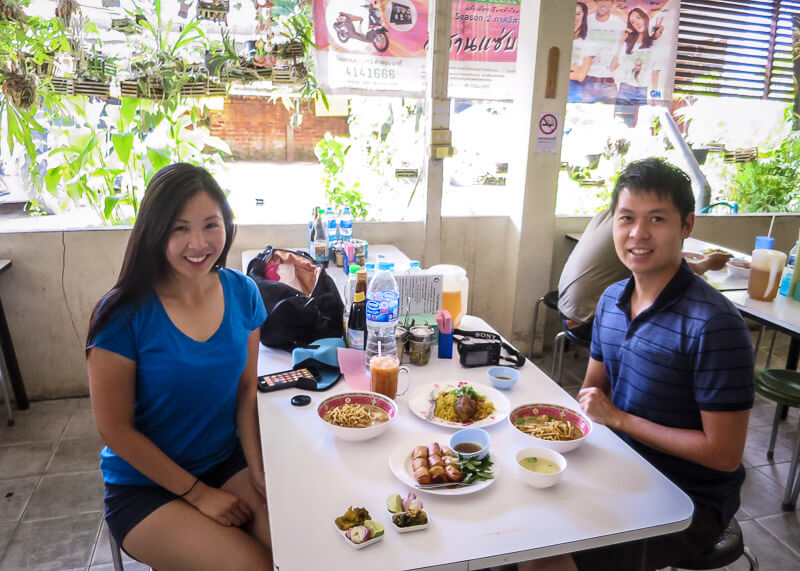 At Khao Soi Islam, one of our favourite places to eat khao soi! Our craving for this noodle dish was what brought us back to Chiang Mai (side note: we have since found better places for khao soi, but this place is still pretty good) 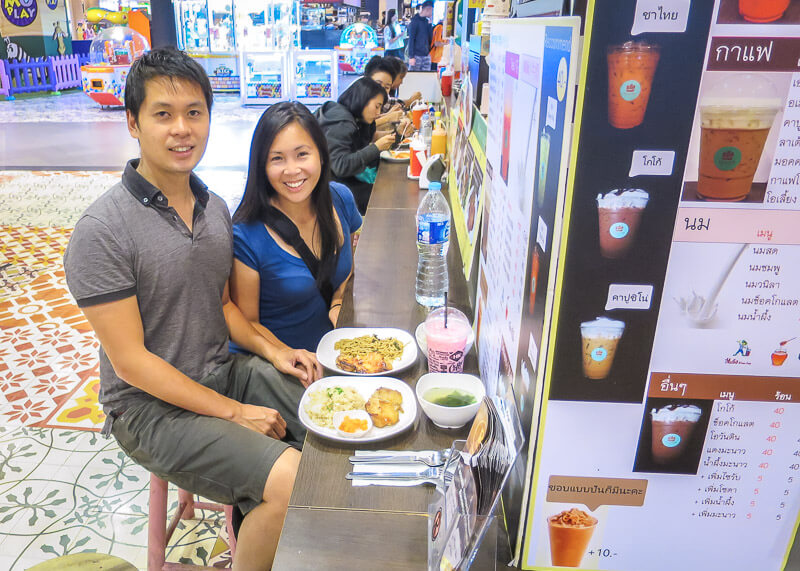 Roasted chicken with garlic rice, another favourite place we go to eat

Living in North America means it’s not easy to just jump on a plane to fly to Asia. Possible, but not practical, especially considering how flights are at a minimum 15 hours direct, not including layovers or stopovers.

Swapping three months of Taiwan to live in Chiang Mai instead

We initially planned to spend three weeks in Chiang Mai during our year of travelling. But as you may recall during our second-month highlights, we met an incredible entrepreneur who unknowingly convinced us to stay in Chiang Mai. So we’ve decided to come back for another three months!

Our initial plan (decided before we left for the trip) was as follows:

But when we decided to cut out Myanmar and come back to Chiang Mai, we changed our itinerary:

We’ve also decided not to go Myanmar as originally planned. This decision means a lot of itinerary tweaking and losing the money we spent on non-refundable flights and hotels. Boo.

Note to readers: We decided not to go to Myanmar during this time. But as you may remember during my monthly highlights in month four, we changed our minds at the last minute and eventually did go to Myanmar.

I know people must be imagining me on a beach, sipping margaritas all the time but the reality is far from that

Every task/errand takes 10x longer than usual. For example, we spent a reasonable amount of time hunting for apartments for our next stay. Then, we would go home and research everything we needed to know about the deposit, including what it’s like to pay for electricity and water. I was also very nervous about signing a contract in a foreign country, so that was another thing to learn. 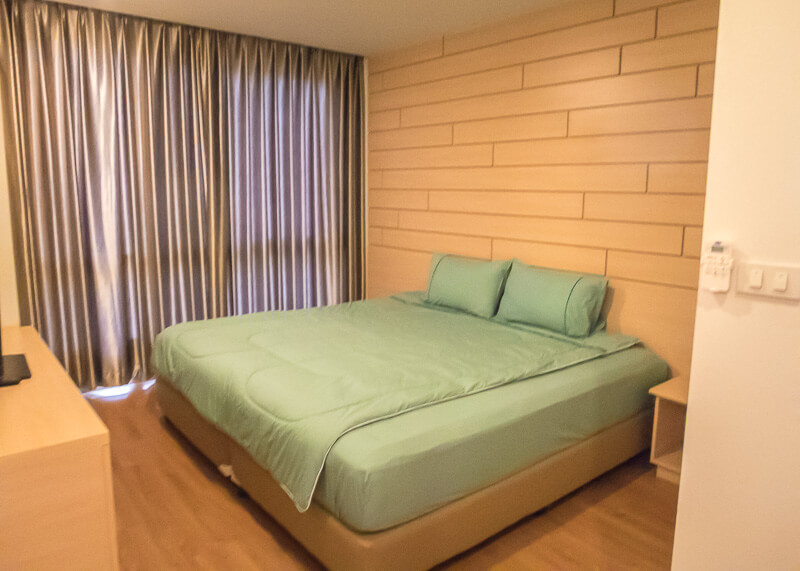 We almost signed a contract for this apartment in Ninman. We changed our mind at the last minute and went with another place

I also had serious issues with my debit card and time is spent calling them to rectify the issue. That took (A LOT OF) time too. I’m also in the race to complete a course for my PD credits, so some of my time is spent STUDYING. BOO. 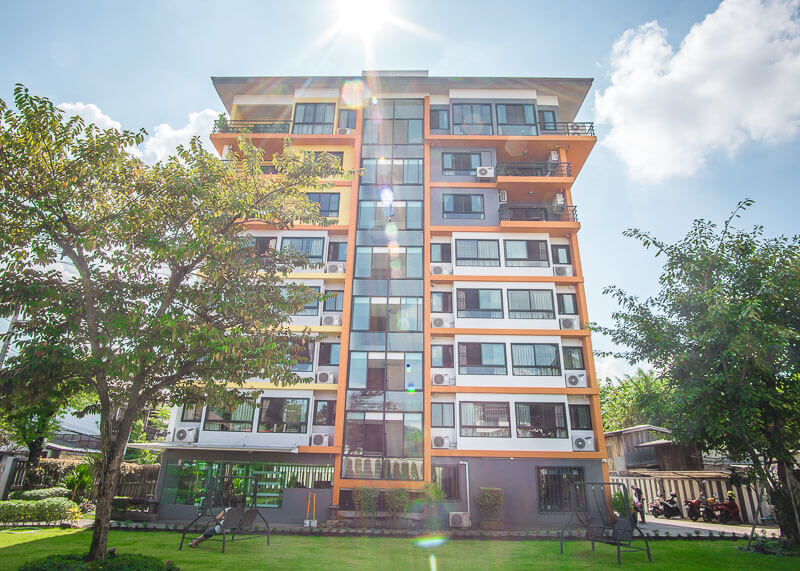 Our home away from home!

After days of searching for a place to live for November, we finally found our home! We were so happy, although the timing is a bit bad because it’s happening during high season in Chiang Mai and it’s in a building where you have to book a year in advance!

Read Next: A Visit To Bangkok Before Heading To Cambodia 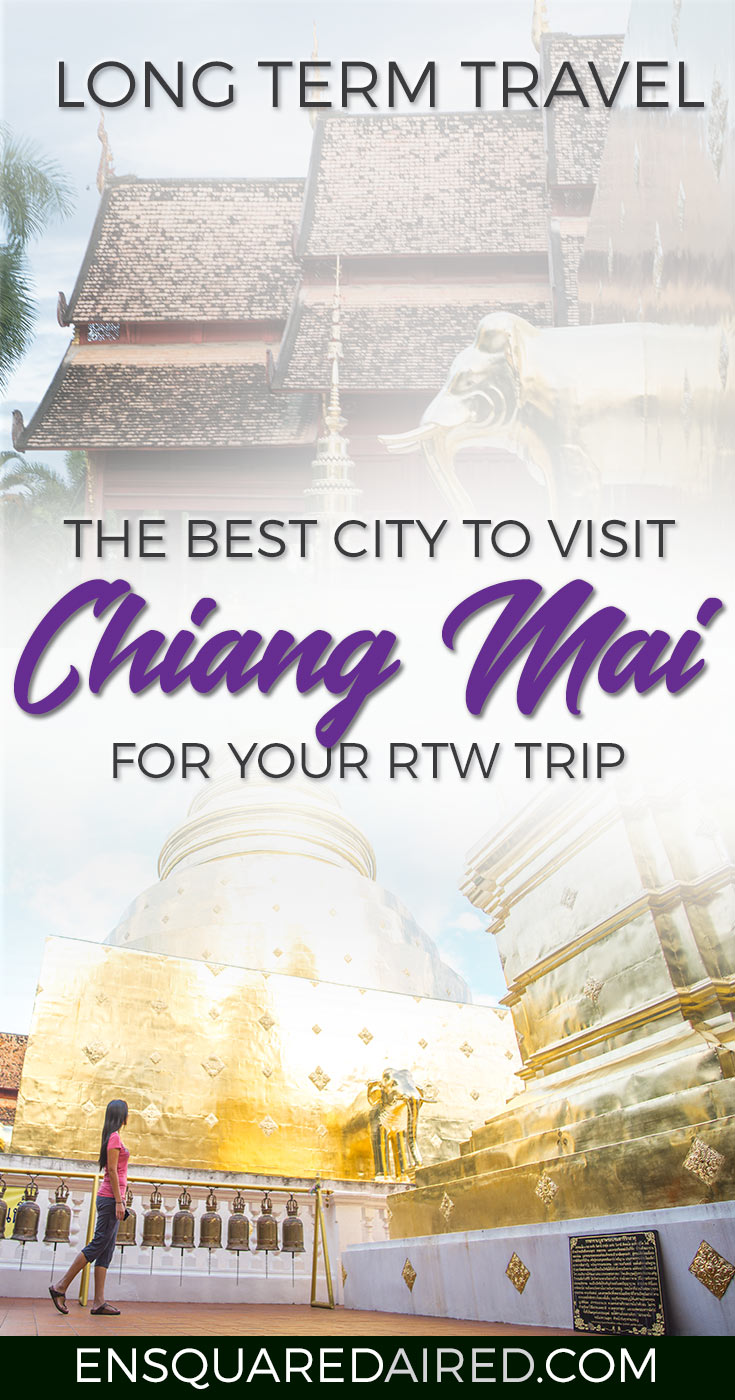 Previous Post: « The Truth About Sukhothai Thailand
Next Post: Month Nine Of The Nomadic Life In New Zealand And Japan »