You are here: Home / Destinations / The Truth About Sukhothai Thailand 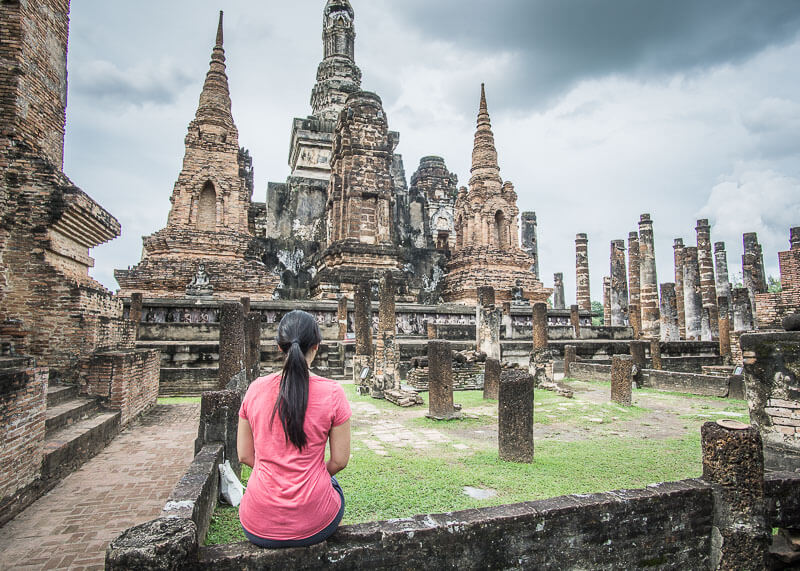 Sukhothai Thailand… I finally made it to this UNESCO park!

I’ve had a wanderlust for Sukhothai since the days of when I travelled around Asia for six weeks. I met some awesome girls during that trip who continued their journey by visiting all of Thailand. While I was back in Canada getting settled in Toronto, they were off and about visiting hard to reach places in Thailand like Sukhothai! Every day, I’d log onto Facebook to follow their journeys. One girl happened to be a photographer and she posted gorgeous photos of the Sukhothai temples. 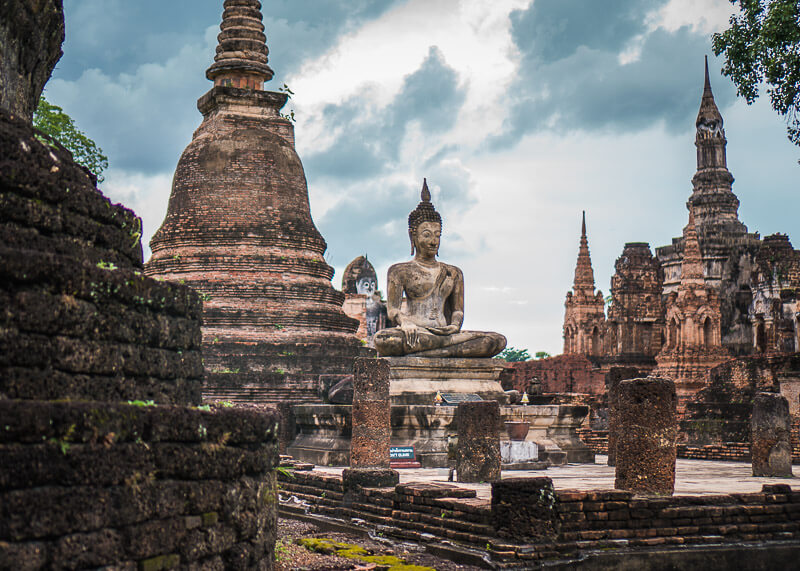 How can you not develop wanderlust for Sukhothai?

Her photos ignited a wanderlust in me, and I was determined that I will someday come back to visit the rest of this beautiful country.

It was my third visit to Thailand during my second month of full time travelling where I finally had the chance to visit this beautiful UNESCO heritage park!

The honest truth about Sukhothai is that it is Thailand’s hidden gem and it should be on your bucket list! Sukhothai is one of the most beautiful cities in Thailand, and yet something like less than 5,000 visitors make it to Sukhothai in any given year.

Wat Si Chuang is what brought me to Sukhothai Thailand 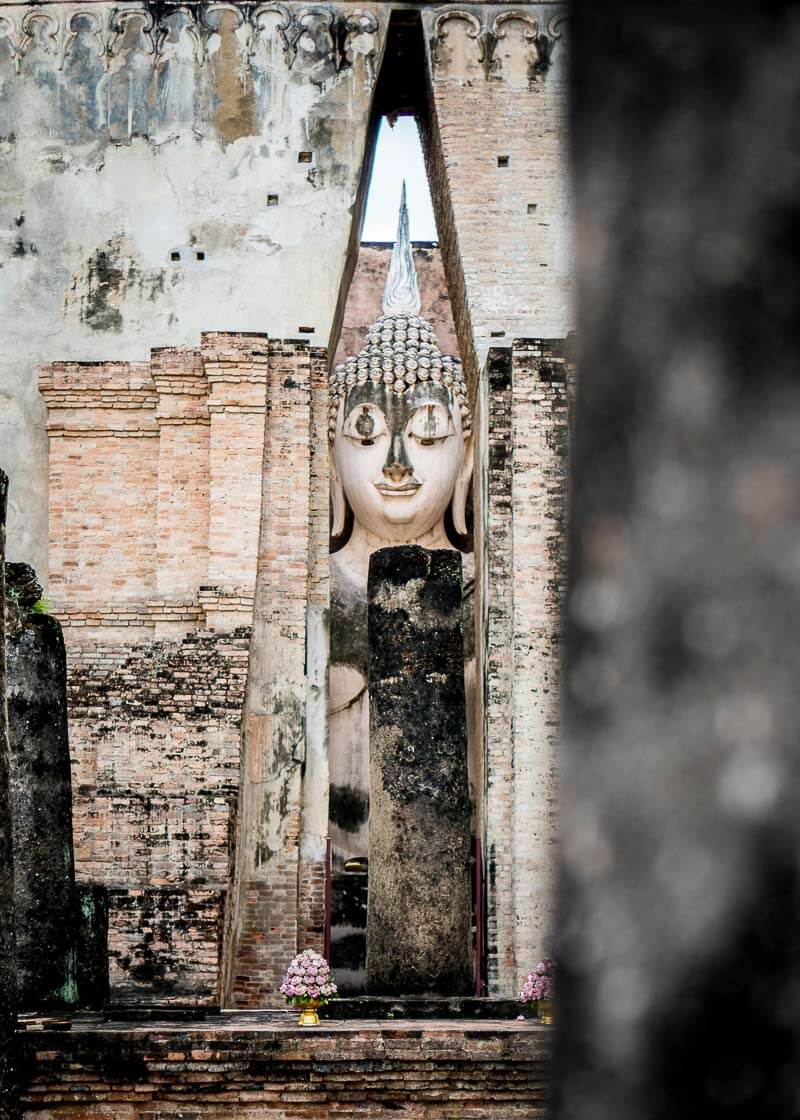 This temple is as breathtaking as it is beautiful. The chamber is tiny, and every sound is magnified. Every so often, a bird would fly in and flap its wings, making it sound so dramatic. 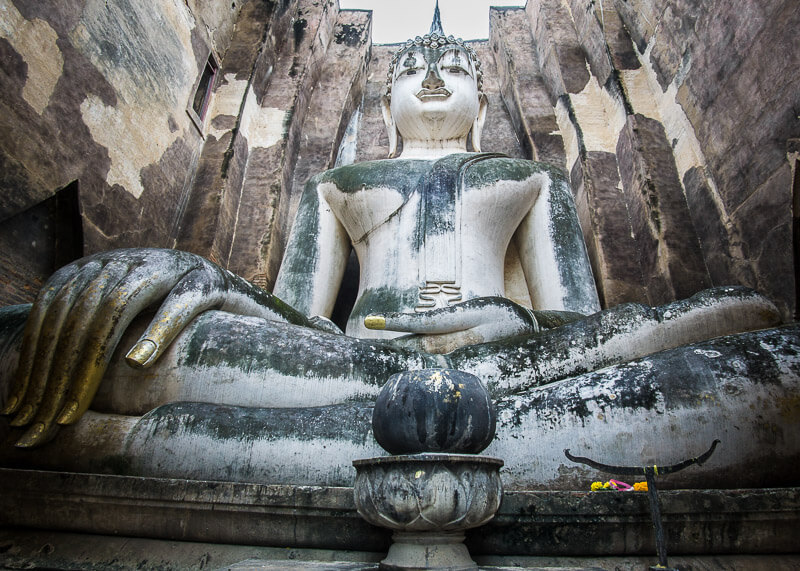 The Buddha inside of the chamber. I could not be more grateful for this experience 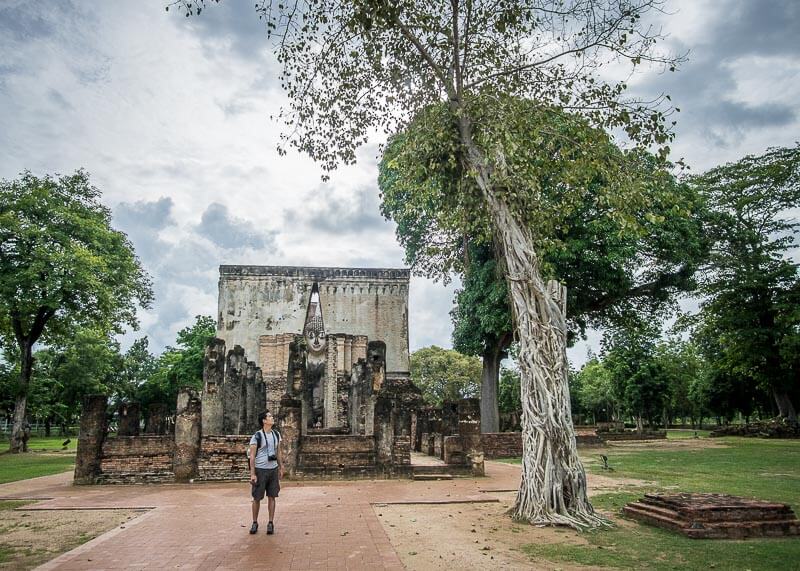 Standing outside of Wat Si Chuan. I wonder how old is that tree? 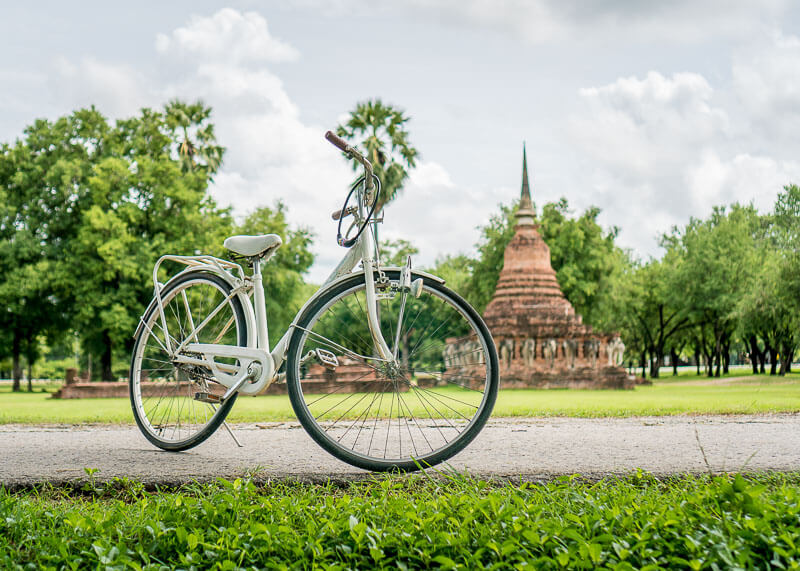 My ride in Sukhothai

Sukhothai is best explored by bike. Traffic isn’t crazy, so you don’t have to worry about fighting with cars for some road space. Once inside the park, you’ll find that the roads and paths are well paved and clean.

Having Sukhothai Historical Park all to ourselves 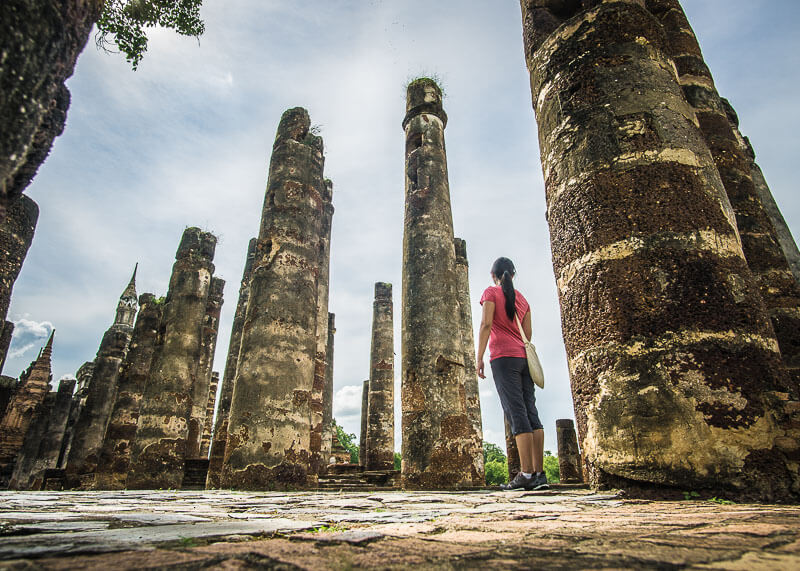 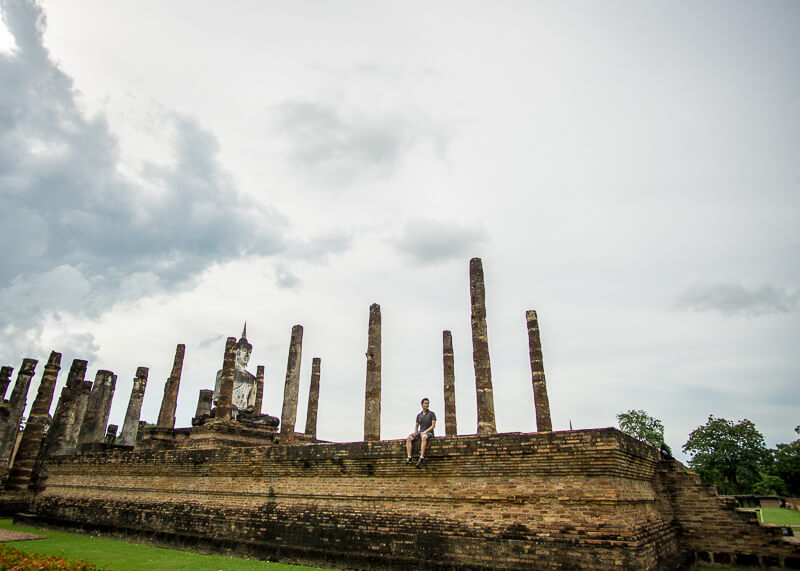 See? No one is around us!

While the park is not as large as Ayutthaya, it’s still quite a distance to get around the different temples. Because this UNESCO heritage park receives very few visitors, we had the park to ourselves during most of our visits. We also never worried about touts trying to sell us tours, massages or overpriced food because it is not a touristy city at all. 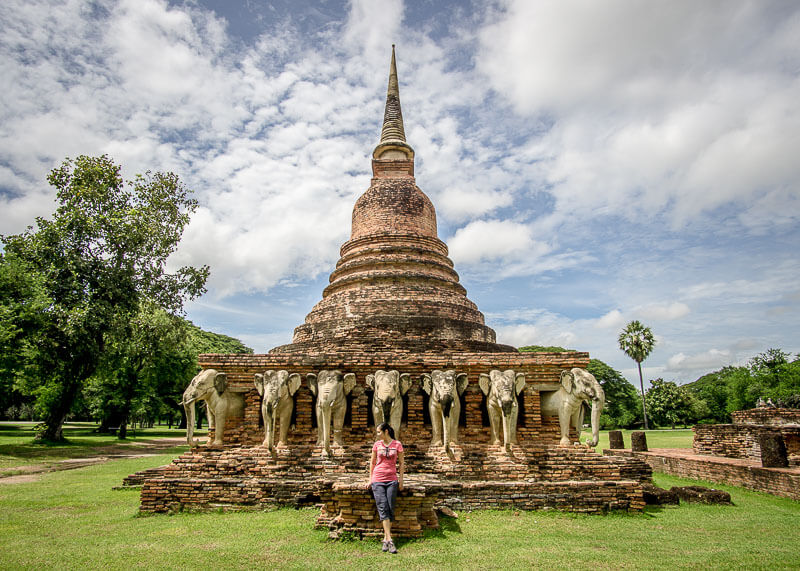 So much greenery in Sukhothai

Sukhothai Thailand is hot year round 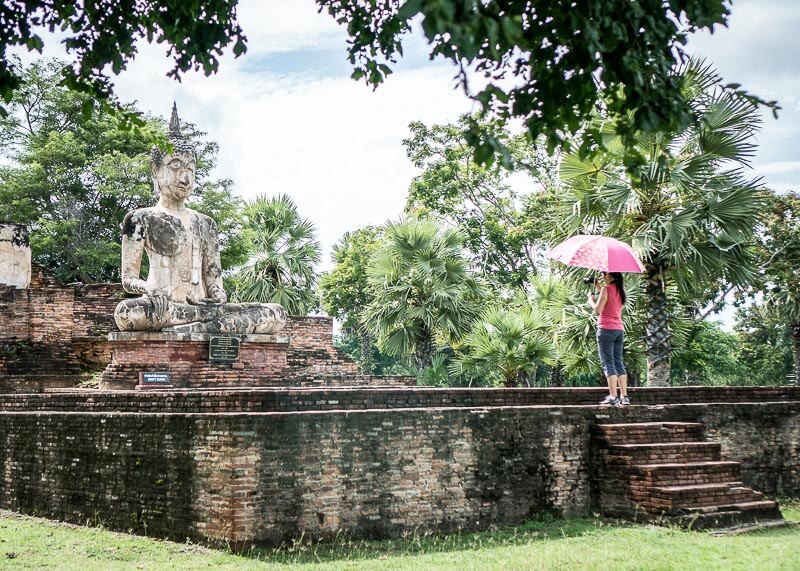 Yup, I walked around with an umbrella in Sukhothai because it was that hot

Like Ayutthaya, Sukhothai is hot throughout the day. We took our time and took lots of breaks in the shade and would only walk out when the sun was hiding behind the clouds.

There was one day where it rained like a madman in Sukhothai. Thank goodness for slow travel though – we decided to stay in at our hotel that day instead.

What is the best time to visit Sukhothai Thailand?

Hard to say because it’s hot all year round. We went in September during the rainy season and managed to plan things day by day. We’d try to go sightseeing when the rain would stop and come back before the next downpour. Exploring the temples weren’t so bad even with the crazy rainfall.

September is when rain happens the most in Sukhothai. It rained pretty much every day when we were here. The rain was so loud that I could barely hear my music when sitting in the hotel room. But the rain comes in bursts – it will rain hard for a few hours and then suddenly stop.

The dog situation in Sukhothai Thailand 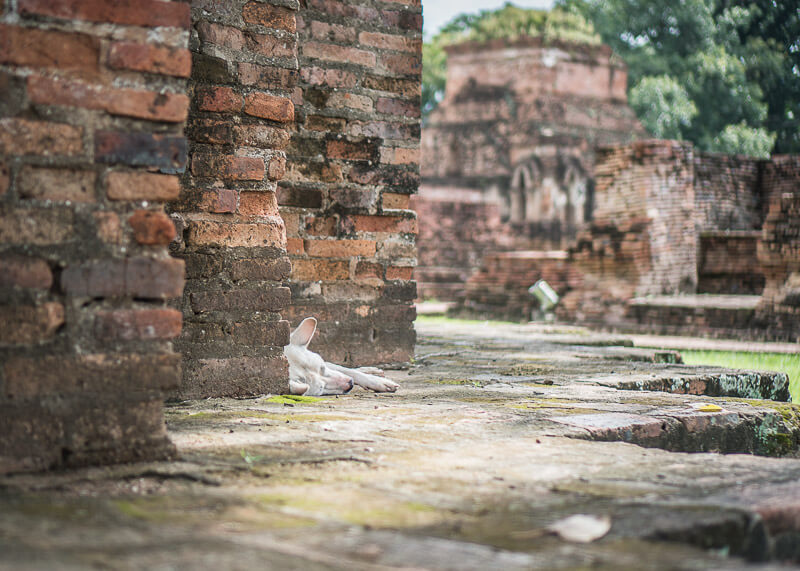 Dogs blend in with the temples

Remember how scared we were about dogs? Well, it wasn’t so bad in Sukhothai. Most dogs usually left us alone, although one dog walked up to us, got very curious and licked G’s leg. They must know we aren’t from around here.

You’ll see a few dogs every 50 meters or so. Most of them just look at you and go back to napping. None of the dogs barked at us or chased us, unlike those damn dogs in Ayutthaya or Chiang Mai (You can read more about my Asia dog encounters here).

The local market in Sukhothai Thailand 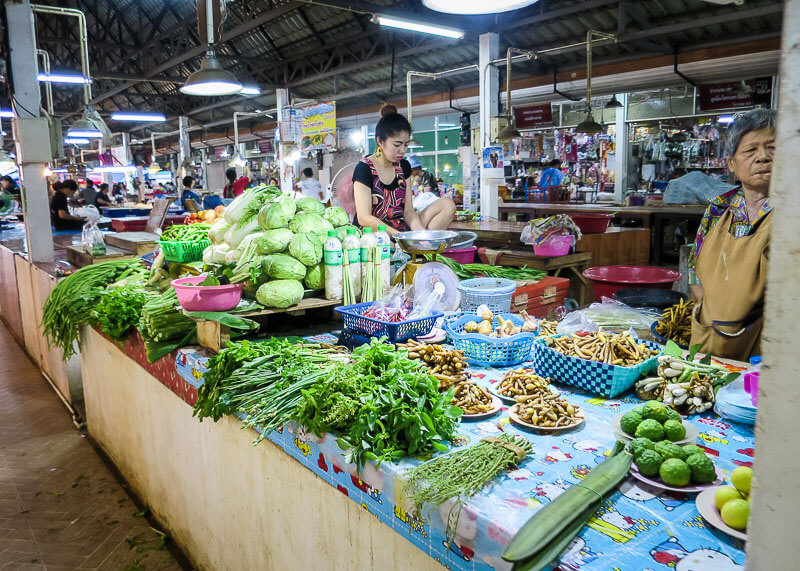 The local market in Sukhothai

The market in Sukhothai reminded me of the days when my aunt used to take me to the market to buy food in Vietnam. The only downside is that the meat smells a bit rotten and I did see some rotten looking meat in this market.

Met a friend in Sukhothai Thailand!

It was in Sukhothai where we met a friendly Australian during dinner one night. We’ve kept in touch and met up with him for lunch in Australia during our seventh month of travelling!

Honestly, guys, if you are hit with wanderlust by my travels, you should hear this man’s stories. He’s sailed for years and travelled for over two years at a time! Incredible!

English is hard to get around in Sukhothai Thailand

Of all the cities we visited in Thailand, we found that English was hard to get by in Sukhothai. For example, the hotel manager couldn’t speak English, and most restaurants didn’t speak much English.

But we still managed to try some yummy dishes. You definitely need to try Sukhothai noodles while in the city – it’s the only place in Thailand where you can eat this type of noodle soup. 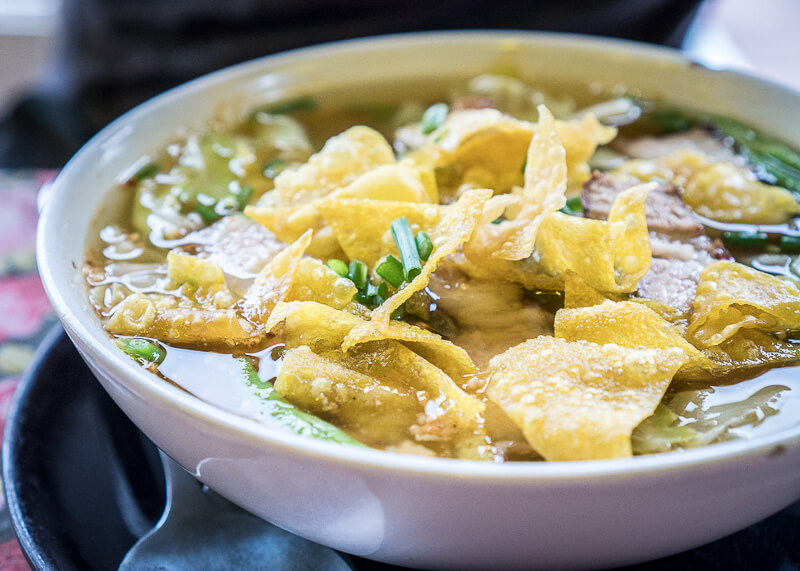 We made sure to eat Sukhothai noodles. You can’t find this dish anywhere else in Thailand 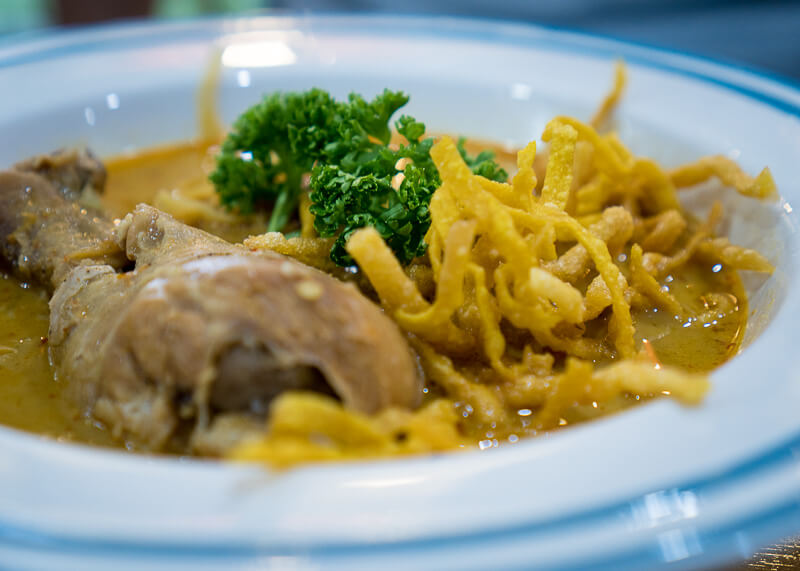 And of course, khao soi 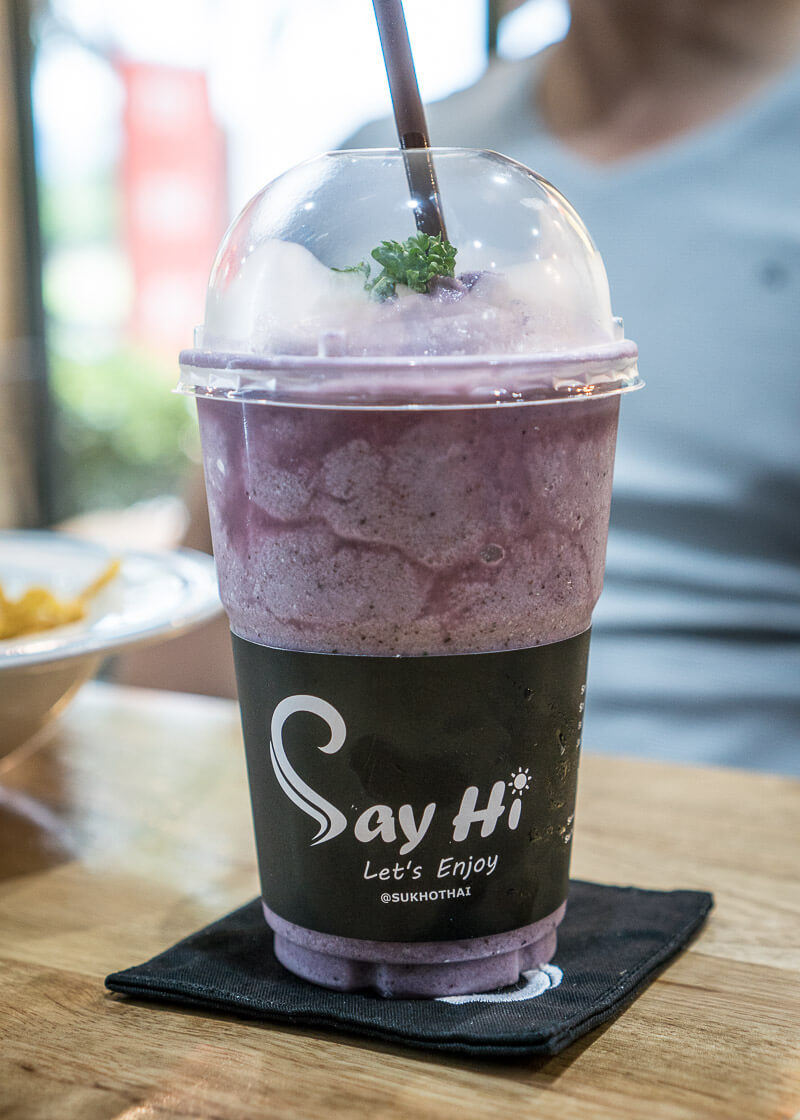 This blueberry smoothie was pretty good! 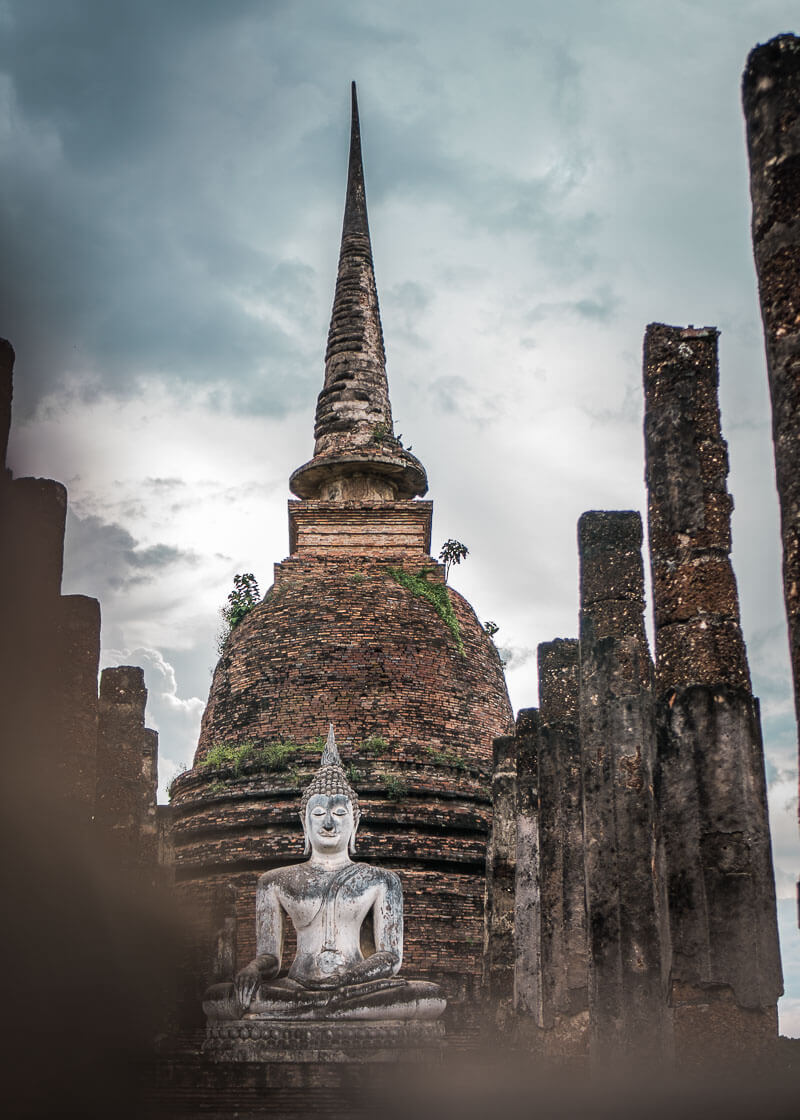 Definitely one of my favourite cities in Thailand

Read Next: Chiang Mai, Our Next Destination! 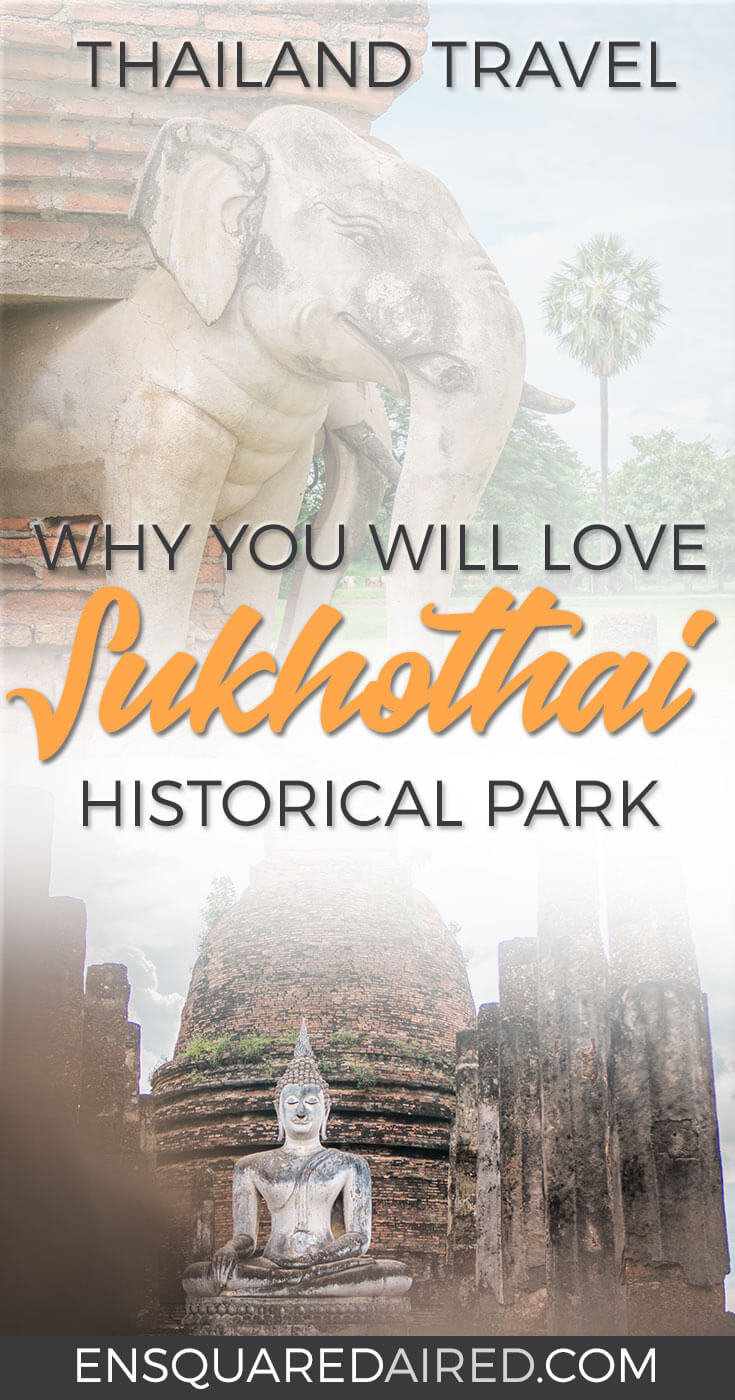 Previous Post: « Why This Sukhothai Hotel Is The Best Choice For Budget Travel
Next Post: Long Term Travel | Here Is What Living In Chiang Mai Thailand Is Like »