You are here: Home / Travel / Why This Is The Best Route from Ayutthaya To Sukhothai 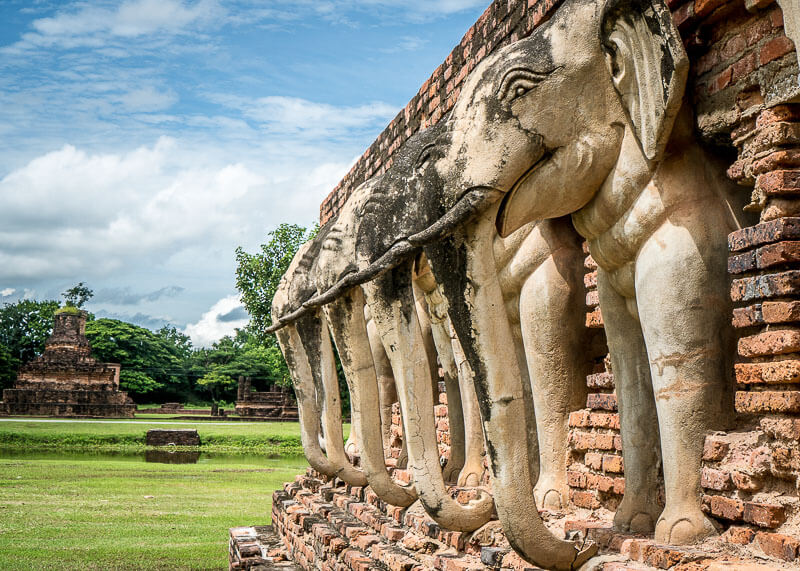 Ayutthaya to Sukhothai… our next stop!

After spending four days in Ayutthaya, it was finally time for us to head to Sukhothai.

Indeed, this journey left me a bit anxious when I was planning our year of travelling because Sukhothai is not an easy place to reach. To get to Sukhothai, we would have to take a train, Tuk Tuk then bus before arriving at our hotel. But honestly, the journey is so worth it because Sukhothai is a magical place to visit.

Options on how to get to the city

You can either take the train/bus or bus to arrive in Sukhothai from Ayutthaya. The train/bus combination is a bit complicated, which I will elaborate below.

Bus from Ayutthaya to Sukhothai

Train from Ayutthaya to Phitsanulok, then bus to Sukhothai

Pros of taking the train

Cons of taking the train and bus

We choose to train to Phitsanulok and then bus to Sukhothai. Trains in Thailand are an excellent and safe way to get around the country.

How we booked our tickets from Ayutthaya to Sukhothai

We bought our tickets from Ayutthaya to Phitsanulok at the Bangkok train station. Make sure you know precisely what ticket you want to buy before arriving at the train station. It was a bit of a struggle to communicate what we wanted with the attendant.

What happened on the day of the train ride from Ayutthaya to Sukhothai?

Our guesthouse arranged a ride for us to the train station with a trustworthy Tuk Tuk driver. Since we already had our tickets, we didn’t need to buy tickets at the station. We arrived 40 minutes before departure, which was ample time to grab snacks and use the toilets. 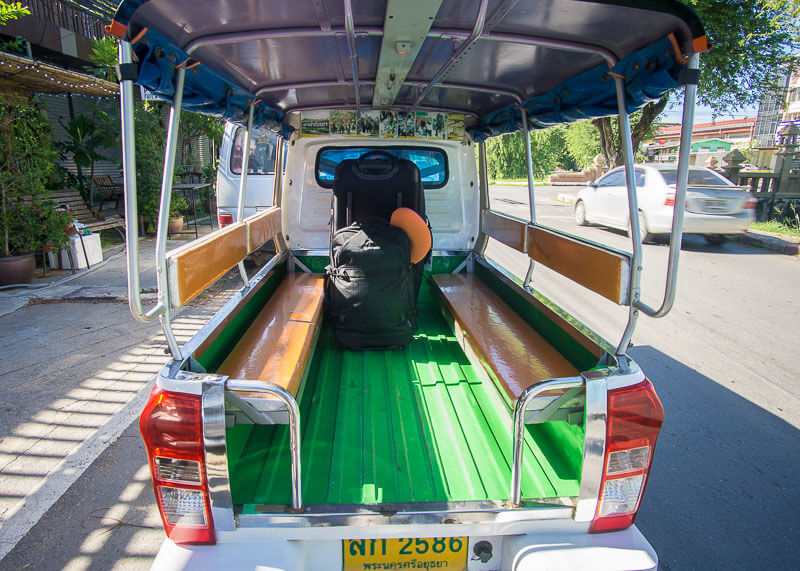 We took a Tuk Tuk with our massive suitcase, and it turned out ok 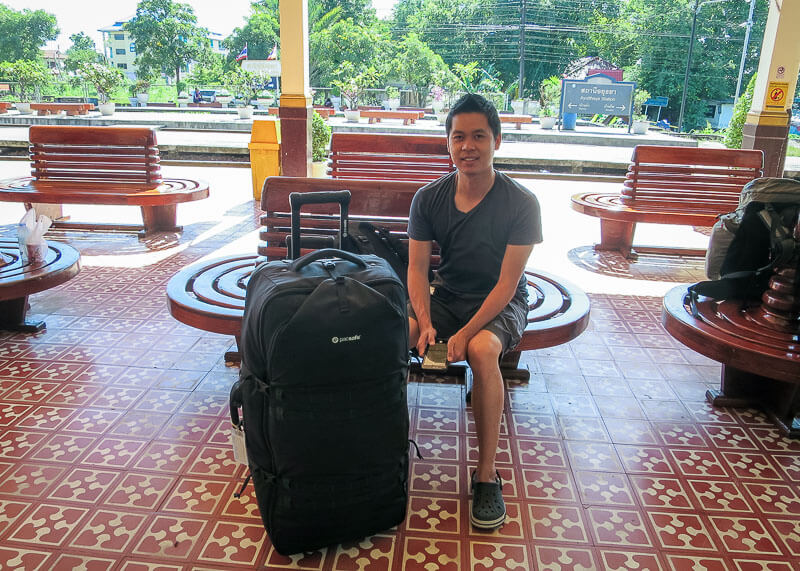 Waiting for our train at the Ayutthaya train station 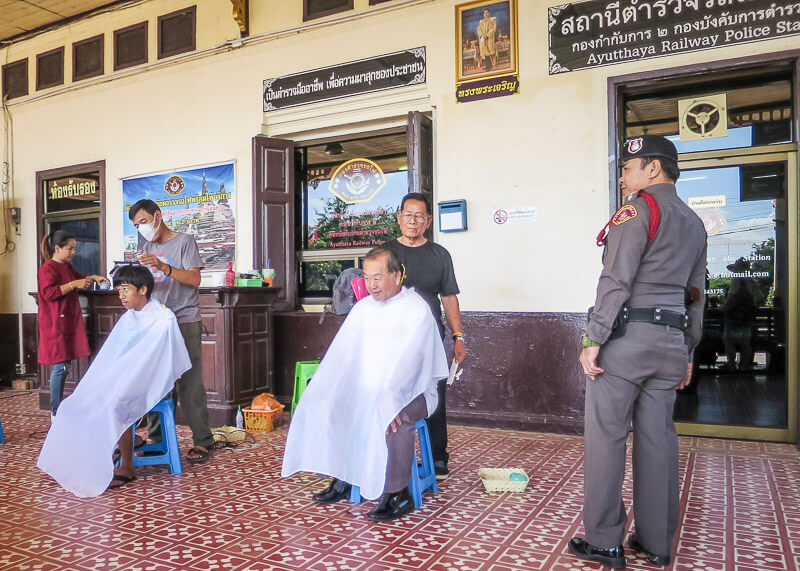 You can get a haircut at the train station

The train ride was nice and scenic, nothing too crazy. The ride took about 3.5 hours. 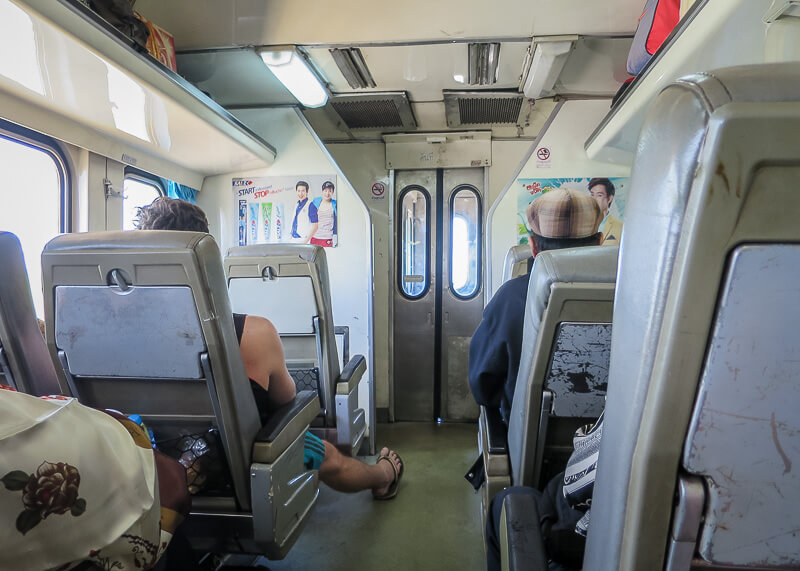 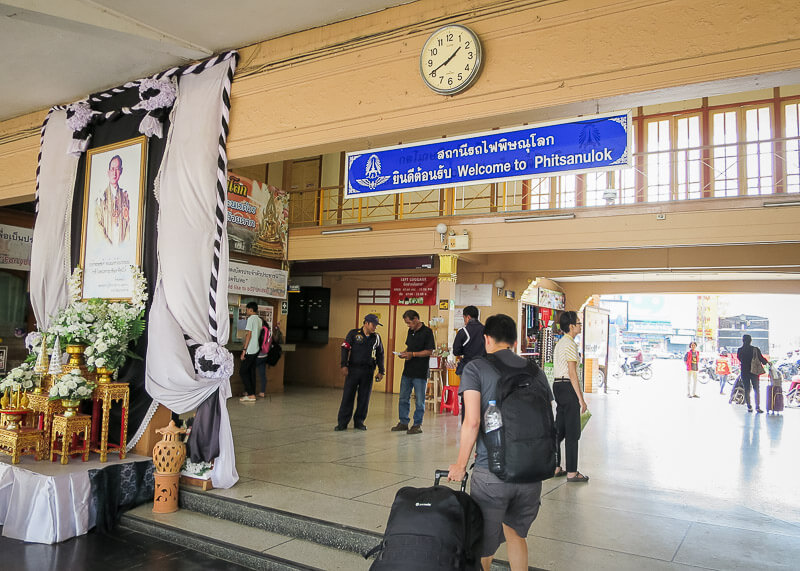 Arrived at the Phitsanulok train station! Time to figure out how to get to the bus station

Once we arrived at the Phitsanulok train station, we needed to figure out a way to get to the bus station. Tuk Tuk was our best option. Let’s hope we don’t get scammed.

So we walked out of the bus station in search of a Tuk Tuk driver, and there was a lineup of them waiting for us! They were watching us like hawks while sitting in their Tuk Tuks, calling at us to go with them. We found a guy who was willing to take us to the bus station for 60 baht. 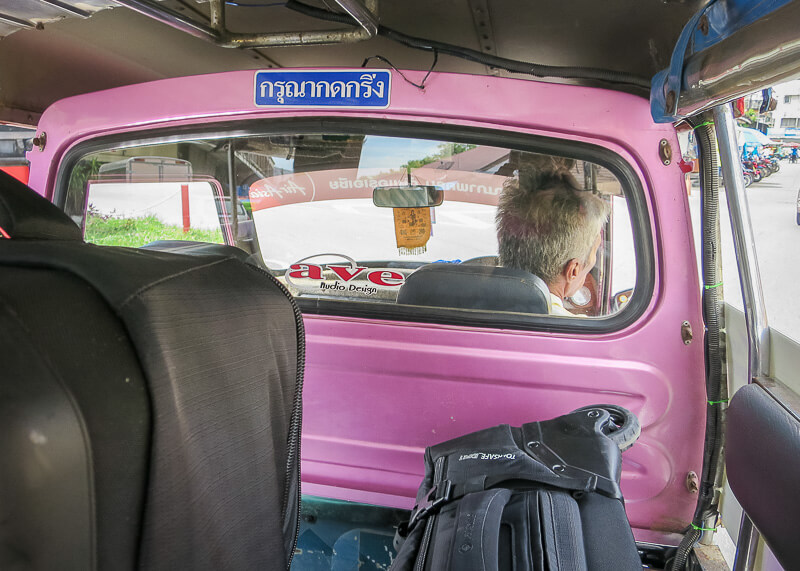 Our ride to the bus station 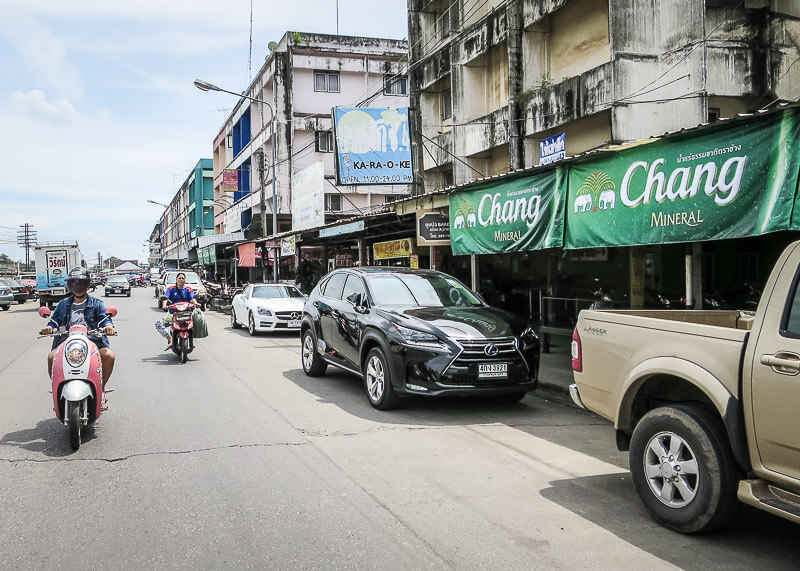 A glimpse of Phitsanulok from the Tuk Tuk ride 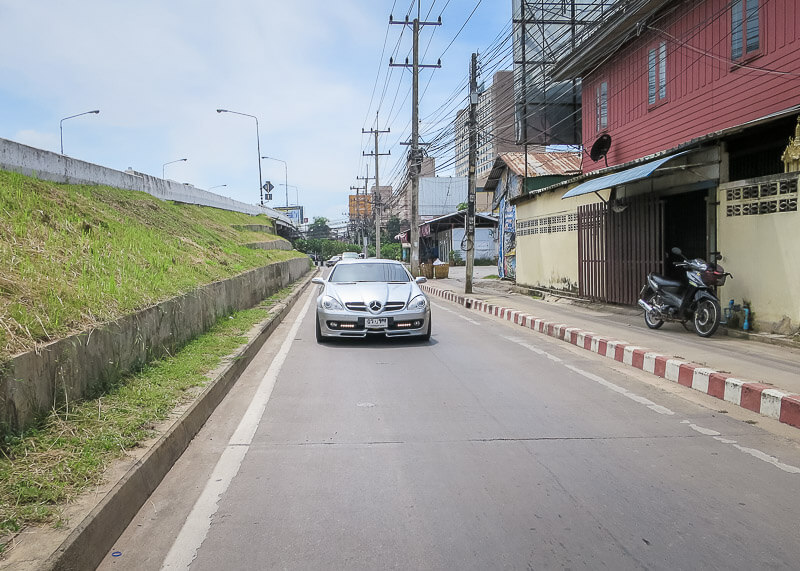 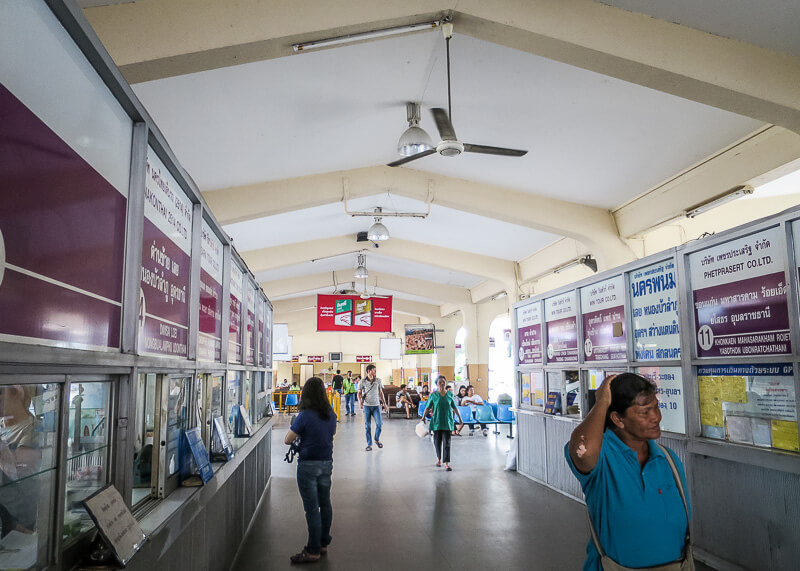 Finally at the bus station in Phitsanulok! Now… time to figure out how to buy our tickets to Sukhothai

Once we arrived at the bus station, a man walked towards our Tuk Tuk and started talking to us. I have no idea who this man is – he had a baseball cap and was wearing a short-sleeved shirt, exposing arms full of tattoos.

Who IS Mr. baseball cap man?

The Tuk Tuk driver literally pointed him to us.

Mr. baseball cap man started following us and walked us to the counter while we bought our tickets. He stood right next to us and waited for us to buy our ticket. Not invading our space at all. He kept trying to help us until the attendant said something to him in Thai and he left us alone.

There are two bus stations in Phitsanulok and this weird interaction made me start to doubt if we were at the right bus station. 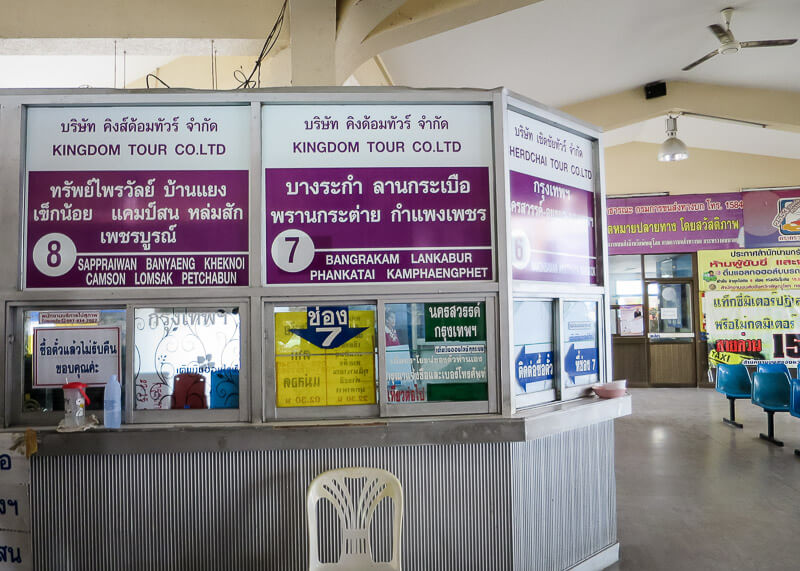 We have to buy our tickets… somewhere

After we bought our tickets, we found a place to sit and I people watch 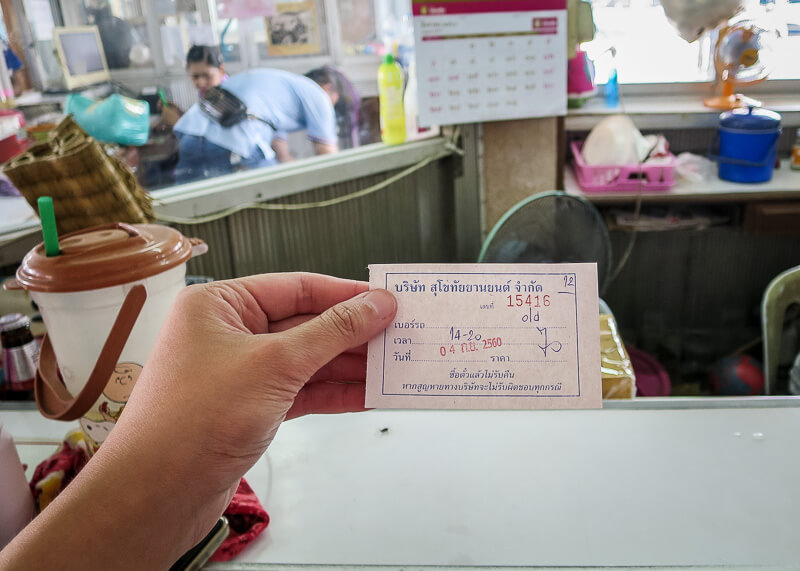 As I watched more people fill up the bus station, I noticed that Mr. baseball cap is talking to every person that came to the station. People handed over their tickets to him before he moved on to the next customer.

As I watched him interact with each customer, I realized that Mr. baseball cap is an employee at the bus station! He was not trying to scam us at all! He wanted to help us and was trying to make sure we bought the right tickets!

These were the moments where I am reminded of the importance of workers wearing uniforms. This guy had no tag, nothing. 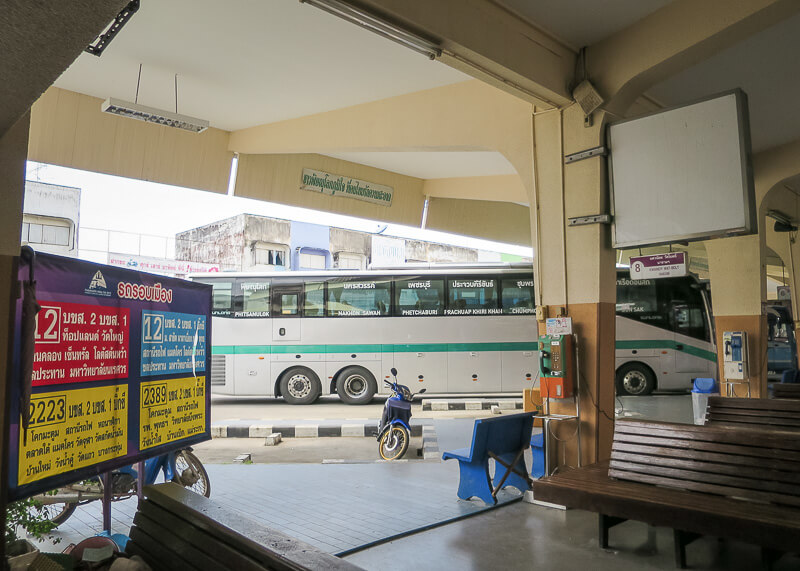 Everything is in Thai at the Phitsanulok bus station

There were no foreigners at the station, just Gary and me. The only reason why we’d stand out was thanks to our suitcase

After a bit of a wait, our bus to Sukhothai arrived and we got on our bus 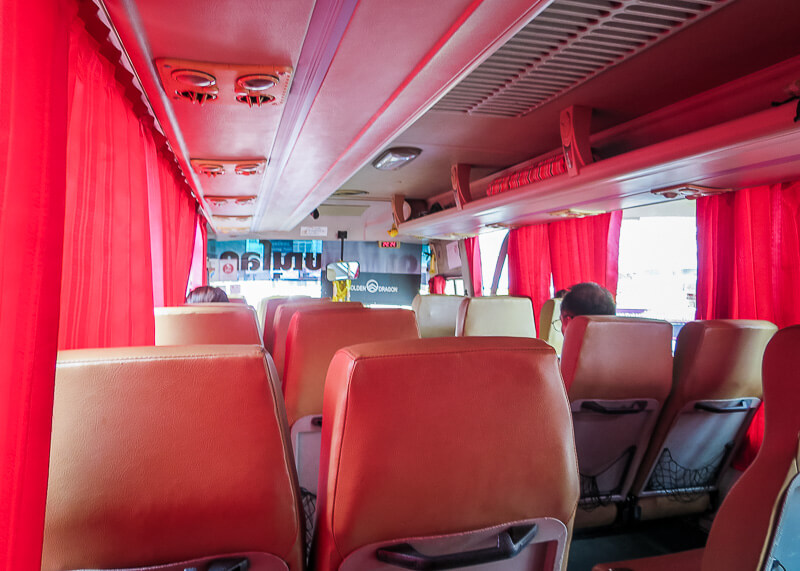 The bus ride was pretty comfortable, and our luggage was within eyesight. 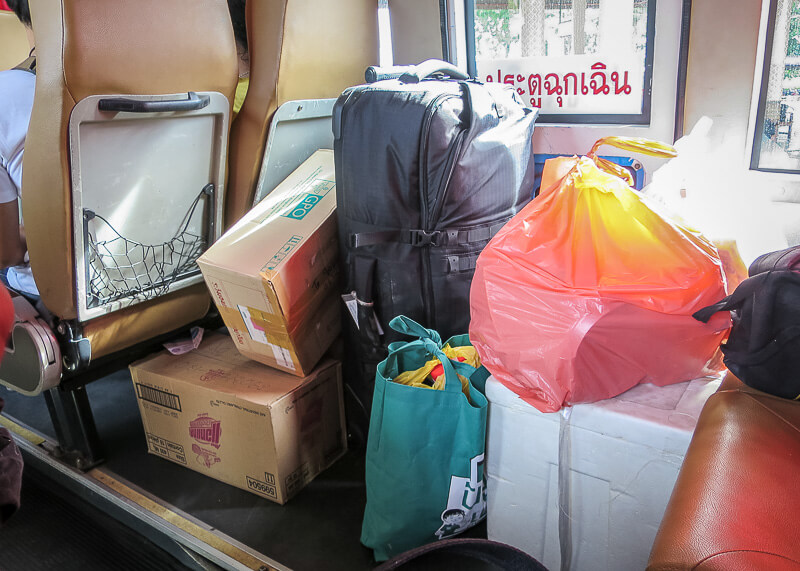 Our suitcases were right behind our seats

After an hour-long ride, the bus stopped and dropped people off at a station that is thirty minutes away from our hotel

At this point, we were confused as heck because we mapped out that the bus station is only a ten-minute walk to the hotel. What the heck?

And to top that off, the bus driver could not speak a word of English, so we had no idea what to do. 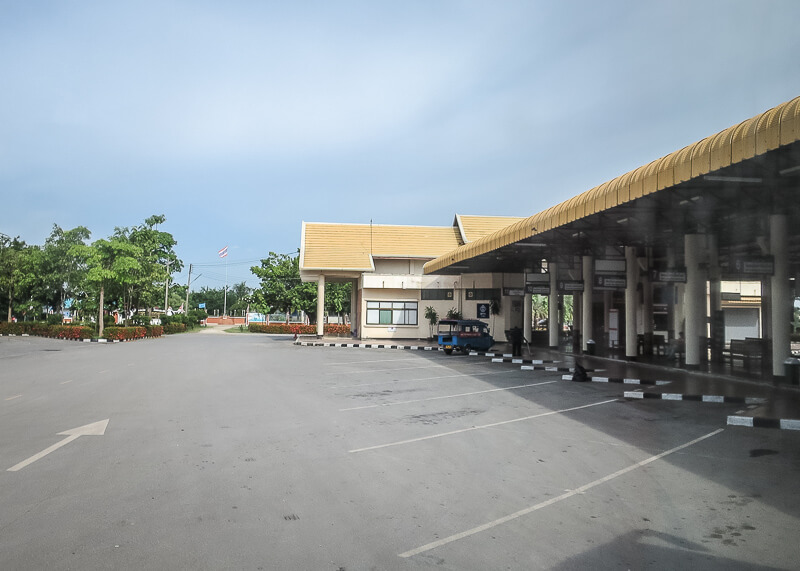 Uhhh…. Do we get off this bus station?

We watched half the passengers get off the bus, while the other half remains on the bus. Unsurprisingly, we have no idea what to do. We don’t know where else the bus is going, and so we debate… if we get off the bus now, we’ll have to find a taxi or Tuk Tuk to get to our hotel. It’s a thirty-minute car ride, and I have a huge aversion to taxis thanks to all my crappy experiences with taxis.

Through observation, we figured out that there are two bus stations. Again, we have no idea where the next bus station is (we didn’t even know a second one exists at this point!) and we still have no idea what to do.

Seeing that half of the passengers are still on the bus, we take a chance and decide to stay with them. At some point, a kind man realized we weren’t Thai, and spoke to us in English to stay and go to Mueang Kao.

Where the heck is Mueang Kao?

No idea… but we decide to trust him.

As the bus continues on its journey, it seemed to turn into a city bus 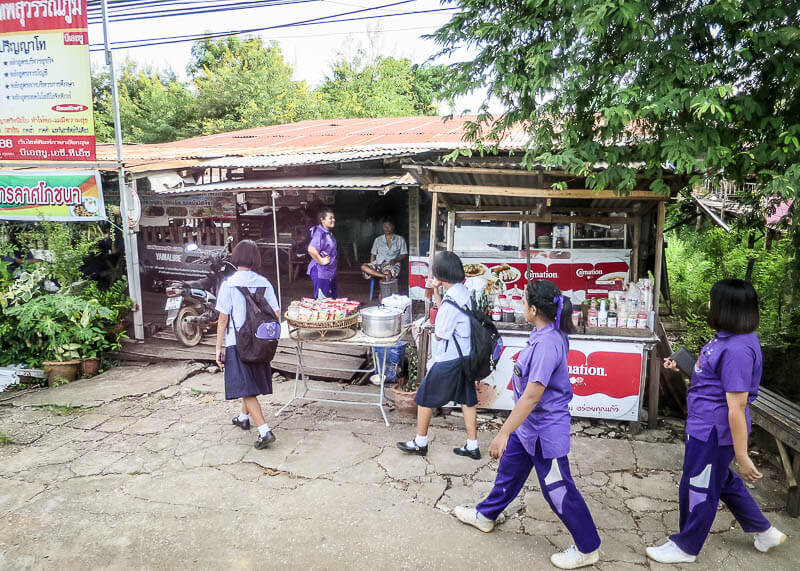 The students who grabbed snacks before getting on our bus

The bus would stop every few meters to pick up passengers, like a public bus. Students would come onto the bus and stand in the middle of the bus because there was no place to sit. 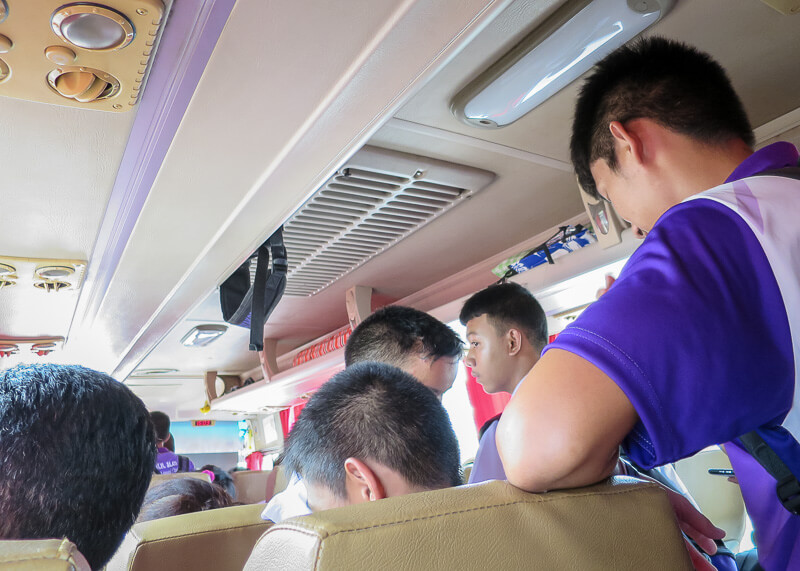 The students who stood in the middle of the bus 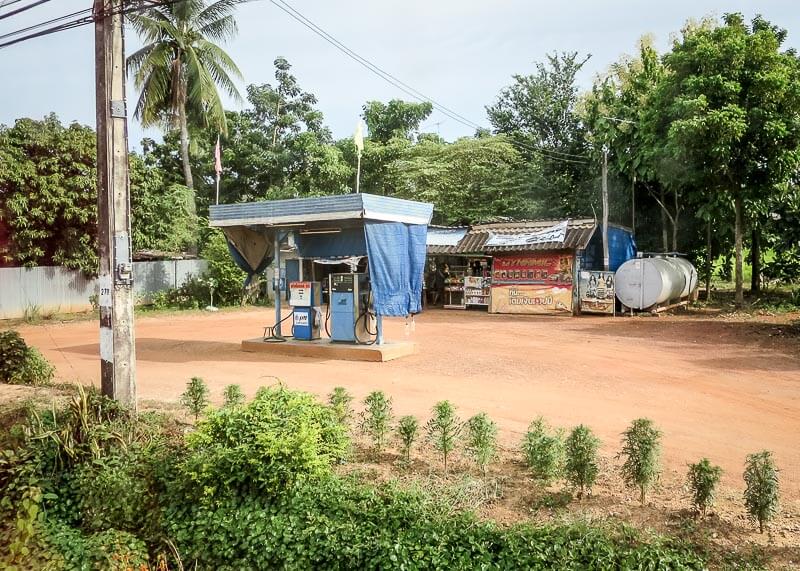 Passing by gas stations in Sukhothai 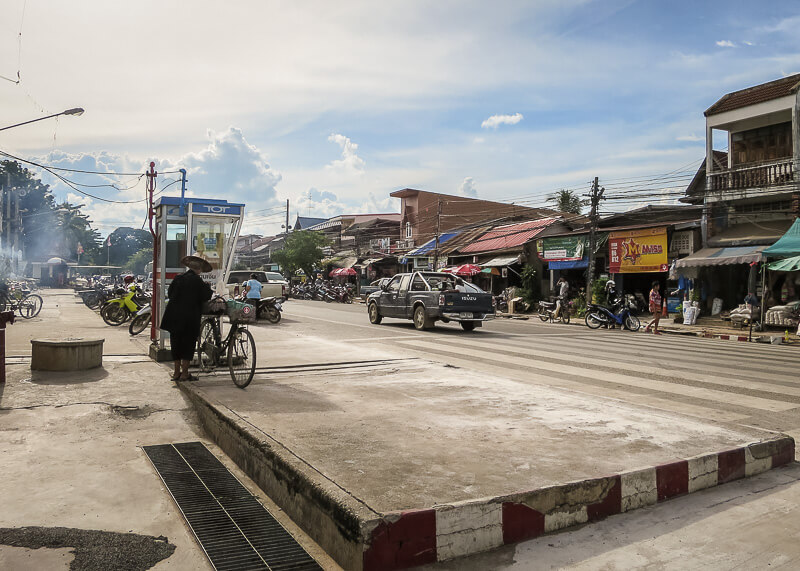 We have no idea where we are going…

After a very long ride, the bus pulled off to the side of the street, and the kind man tells us to get off with him. We get our stuff, get off the bus and pause to see where we got dropped off. To my surprise, we were right in front of a 7-Eleven! 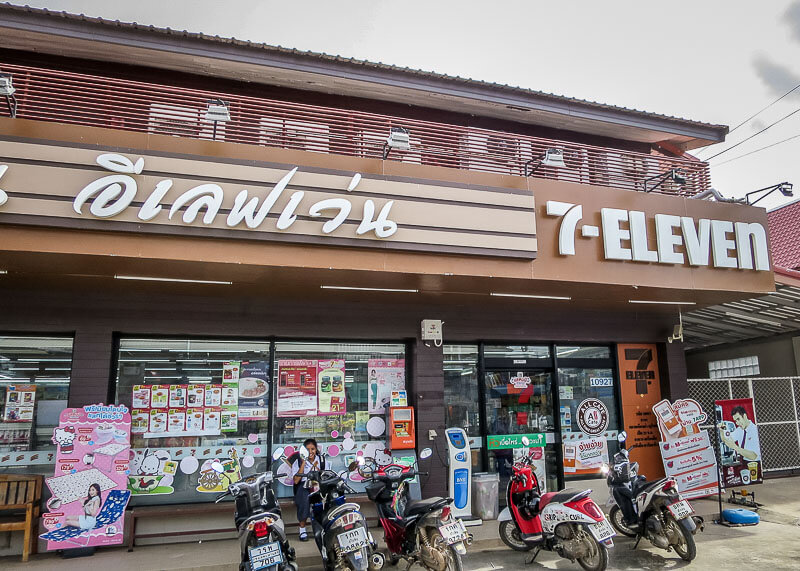 You have no idea how important it is for us to know where 7-Eleven is in Thailand. The first thing we try to figure out when visiting a new city in Thailand is the location of 7-Eleven.

We were so relieved that we listened to the kind man and thanked him as we got off. The man smiled at us, asked if we needed help finding a hotel, which we said no. He wished us a safe trip and made his way to his hotel.

At that moment, I started to think about how news barely highlights the good moments in Thailand. I can’t help but notice how all the things I read about Thailand are the terrible things. The scams, the deaths, the dangers and lack of safety. But what about the good things that happen? Like the people who genuinely care to help us?

Did I feel safe on the train from Ayutthaya to Phitsanulok?

I felt very safe on the train. I always compare my train rides to the ones in Vietnam and China, which are a bit scarier, in my opinion. Vietnam was okay because I was in a private bunker with three other girls that I met during my trip to Vietnam. China was a whole different story. I once took the train from Guiyang to Beijing and was so scared that I didn’t sleep throughout the entire ride. I never felt this scared in Thailand.

Did I feel safe on the bus ride from Phitsanulok to Sukhothai?

The bus ride felt safe – the driver drove responsibly and the bus was in good condition.

Can you charge your phone on the bus or the train?

No outlets on the bus or train, so make sure you have enough battery juice!

Is it easy to ask questions in English?

The train attendants have good English and can help you with fundamental questions about your trip. As preparation, make sure you know the train number, class and the departure time.

Is there food on the train?

While there is no food sold on the train, we got curry, rice and fried mackerel with our ticket

Where can you keep your luggage? 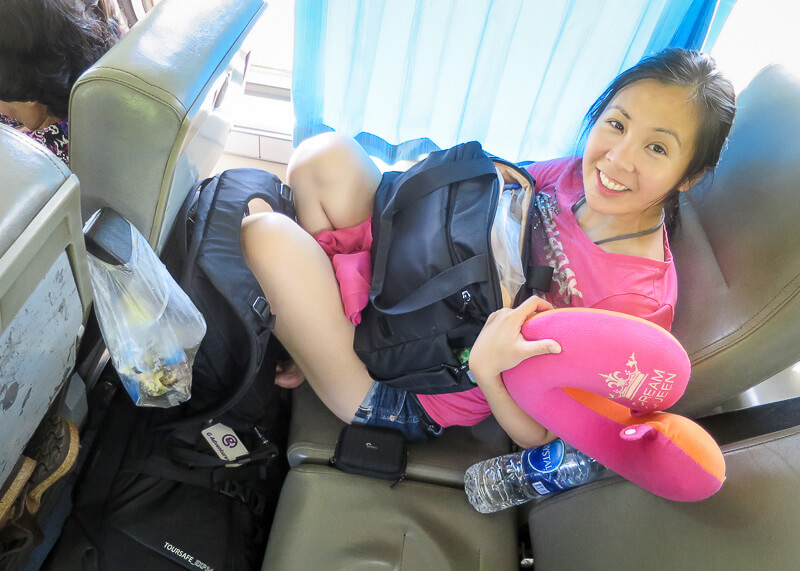 We kept our luggage in front of our seats

The train is very spacious. If you have a big suitcase, you’ll need to store it underneath your seat. You’ll have to carry your luggage on the train, but the steps are short and not too steep. There aren’t any ramps to roll your suitcase up so keep that in mind. 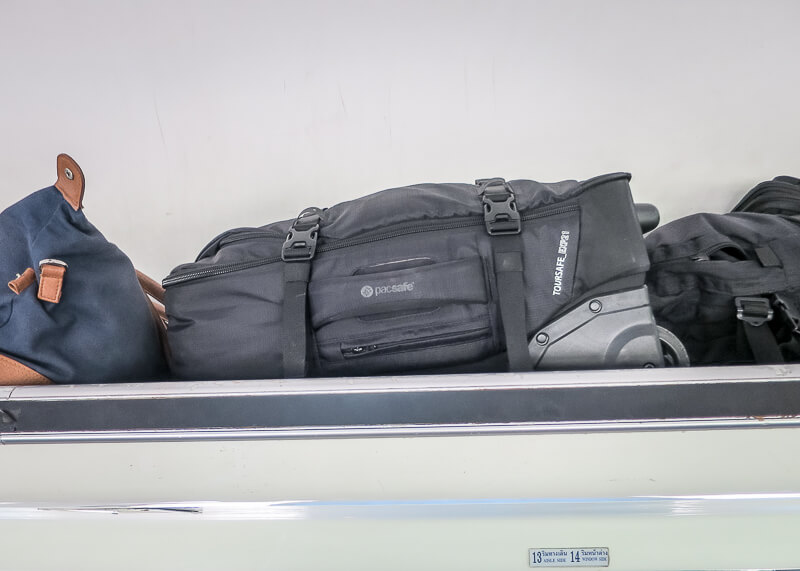 Our carry-on was safely stowed in the overhanging compartment

What were the facilities like on the train and bus during our trip from Ayutthaya to Sukhothai?

The train stations have squat toilets. There are no toilets on the bus so make sure to use the bathroom at the bus station before you get on the bus to Sukhothai. 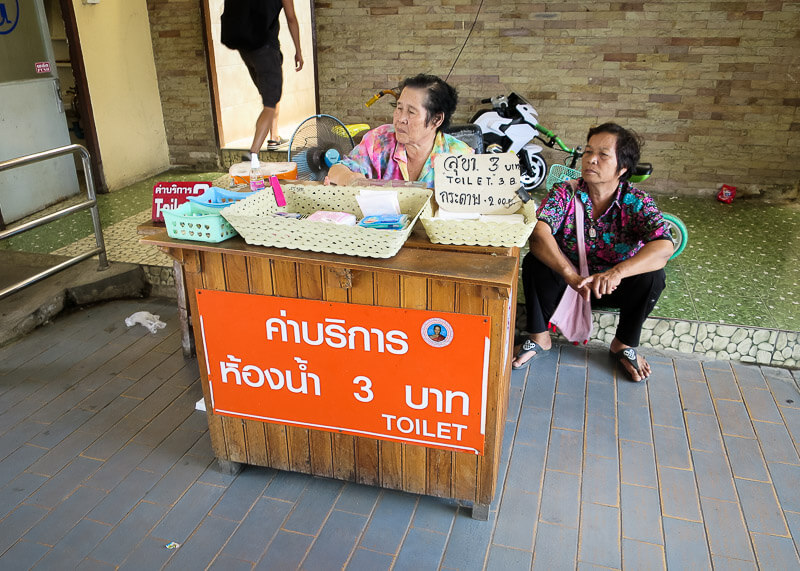 There is a fee to use the toilets, and they are relatively clean.

Any other tips for taking the train?

I visited Sukhothai when I decided to travel around the world for a year. Read this post about why I made this decision because you might find it relatable as well. 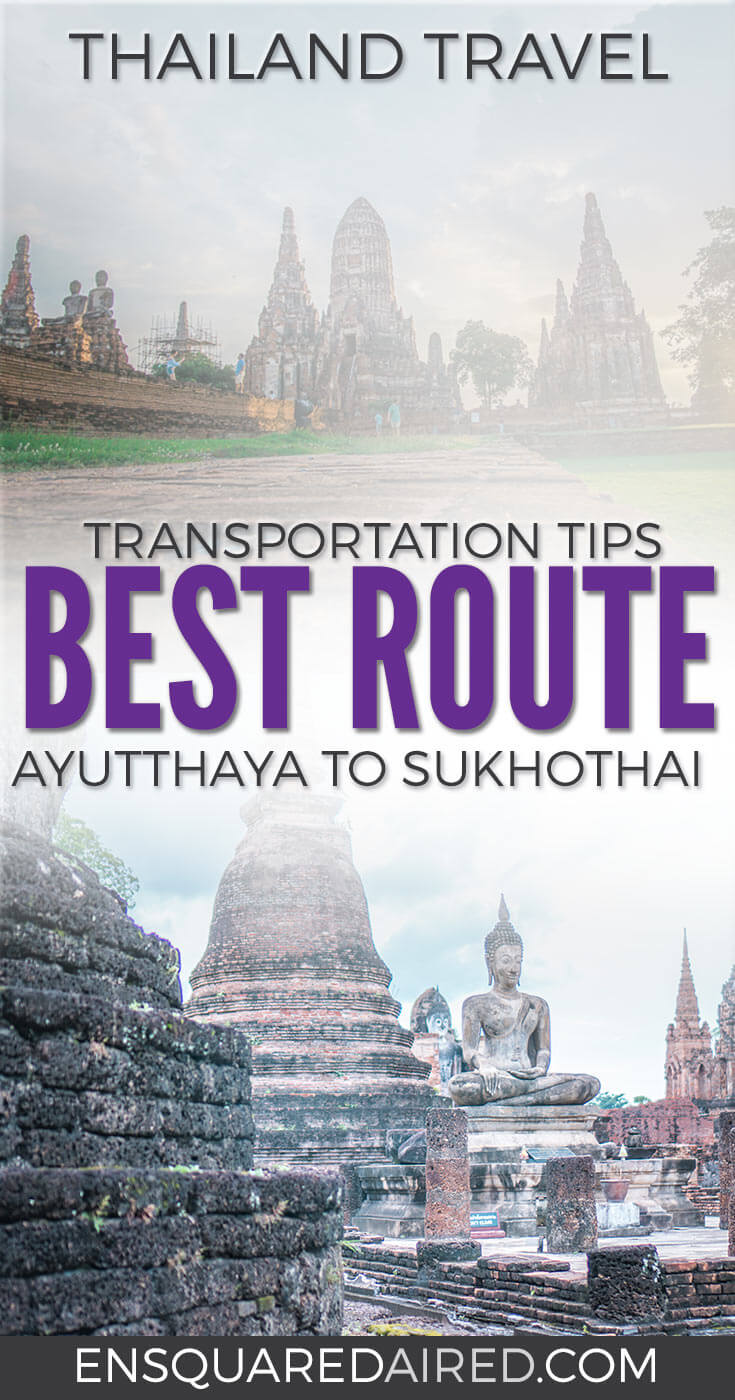