You are here: Home / Destinations / Bangkok Travel Blog Diaries From My Year Of Travel 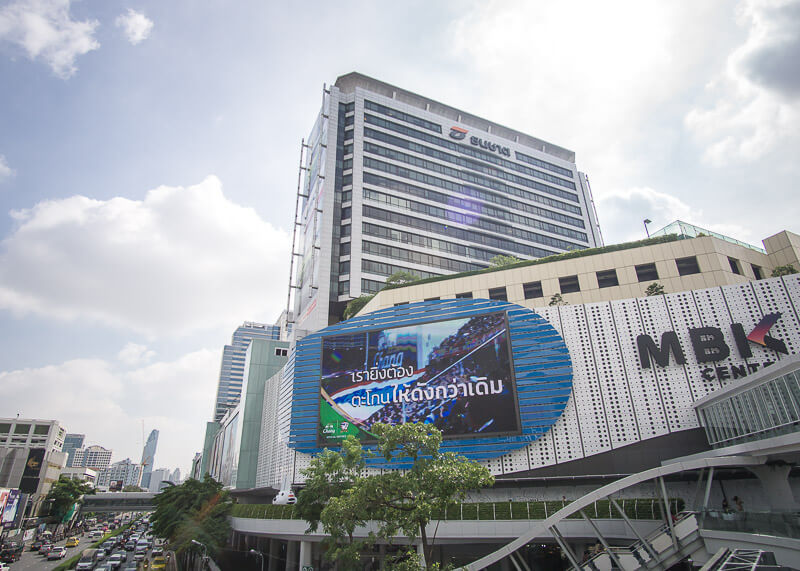 Despite spending three weeks in Chiang Mai, leaving our second “home” was difficult. Going back to Bangkok was more logistical than anything for the next part of our slow travel. It was cheaper for us to fly to Siem Reap from Bangkok, so we figured we might as well chill in the city. On top of that, I thought I would need some time in the “big city” so Bangkok was that break for us. We also used points to book hotels in Bangkok to help with our budget so it really made sense for us to be in Bangkok.

Heading to Bangkok via train

We arrived in Bangkok at 6 am after taking the overnight train from Chiang Mai. I, of course, could barely sleep, so I was already cranky and hungry upon arriving in Bangkok. There was also chaos in the women’s bathroom where at least 30 people were trying to freshen up/use the bathroom – men included because their bathroom was out of service. And of all bare legs to choose from, a big ass cockroach picked mine to crawl.

Add that to the fact that our hotel was a 15-minute walk in some obscure alley and you have one cranky Nancy. 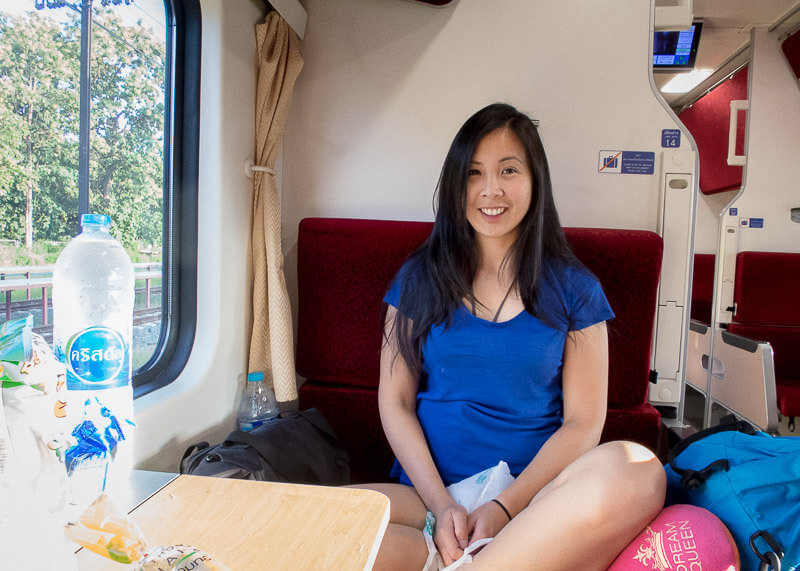 Once we got to the hotel and dropped off our stuff, I was less cranky as we wandered around Bangkok.

Because I’ve been to Bangkok four times now (three for Gary), we avoided the touristy things and didn’t plan much. We were mostly there to chill and wander around the city.

Of course, being in a big city has its perks 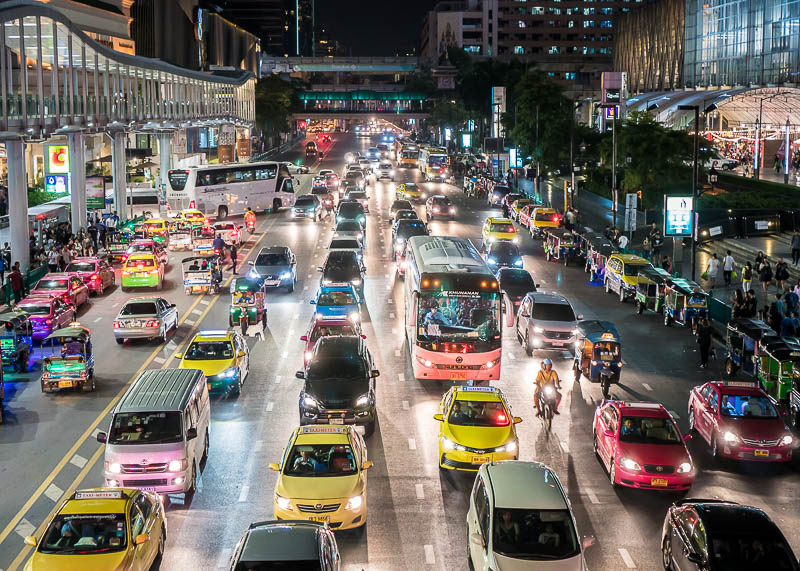 Typical traffic in Bangkok. Luckily, you can take the MRT almost everywhere

You don’t have to worry about planning for bathroom breaks since they are easy to find. Another thing I love about Bangkok is the MRT – it takes you almost anywhere you’d want to go in Bangkok. The infrastructure makes exploring Bangkok so liberating and convenient.

I thought I had done and seen everything in Bangkok 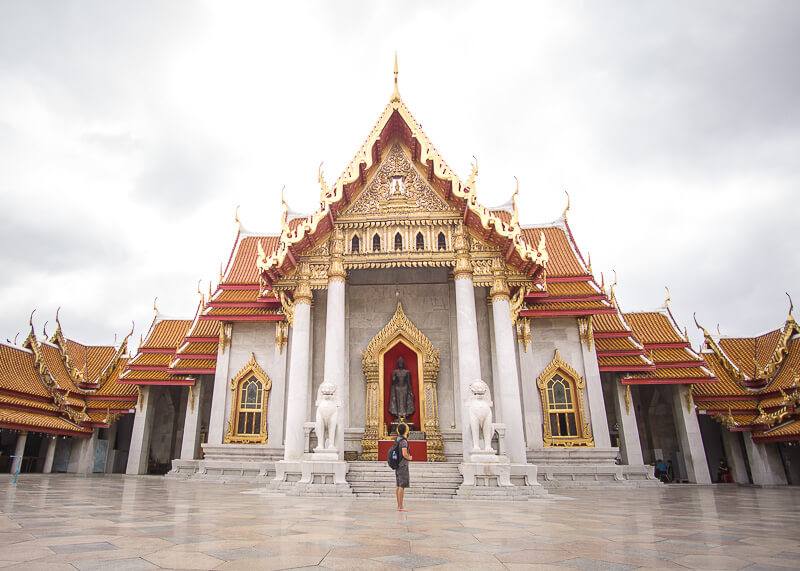 Wat Benchamabophit, where you will find tranquillity because there aren’t many tourists! Compare that to the Grand Palace, which looks like a nightclub some days with the hoards of tourists!

But nope, I was wrong. I saw a beautiful photo of Wat Benchamabophit (Marble temple) on Pinterest and realized that this temple is a place I’ve never visited before! So we set aside one day to go to Wat Benchamabophit. 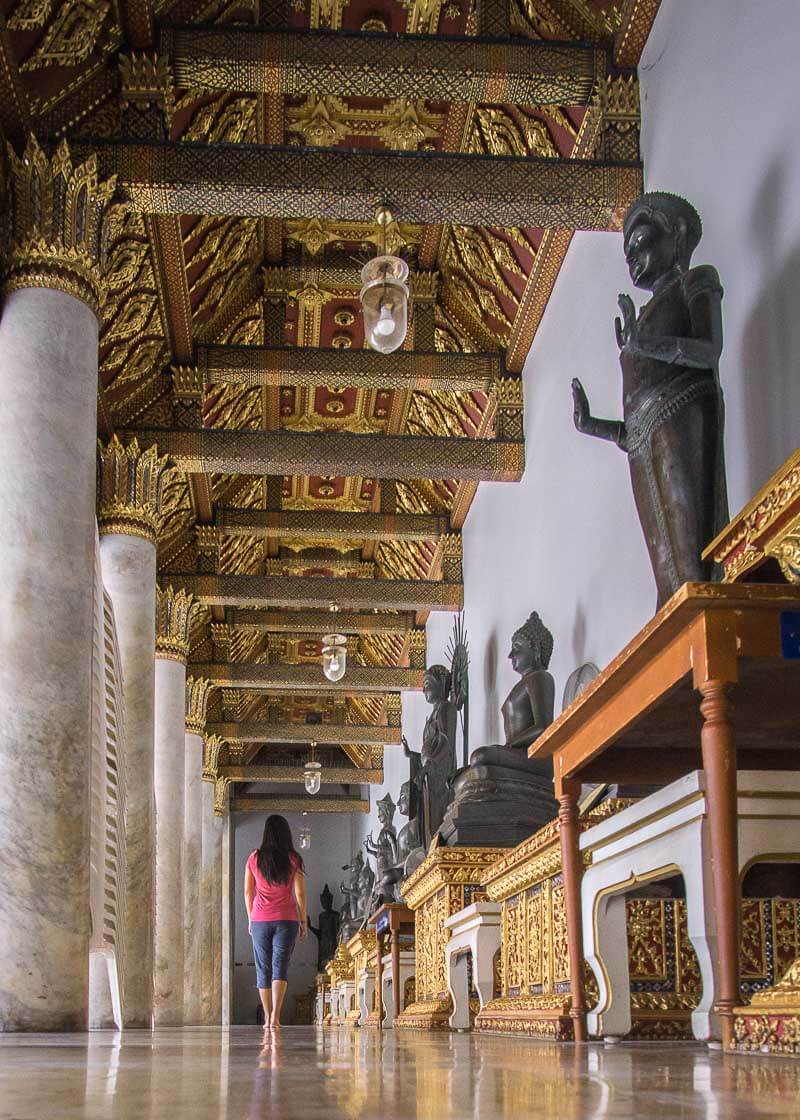 But how do we get to Marble temple?

Of course, of all the places that are accessible by MRT, this temple is NOT one of them. So we had to figure out a way to get to Marble temple. We thought about taking the taxi for a split second before deciding against it and walked. Yes, we spent a whole hour walking in the sweltering heat. It wasn’t a very scenic walk until we came across a huge lizard that crossed our path! 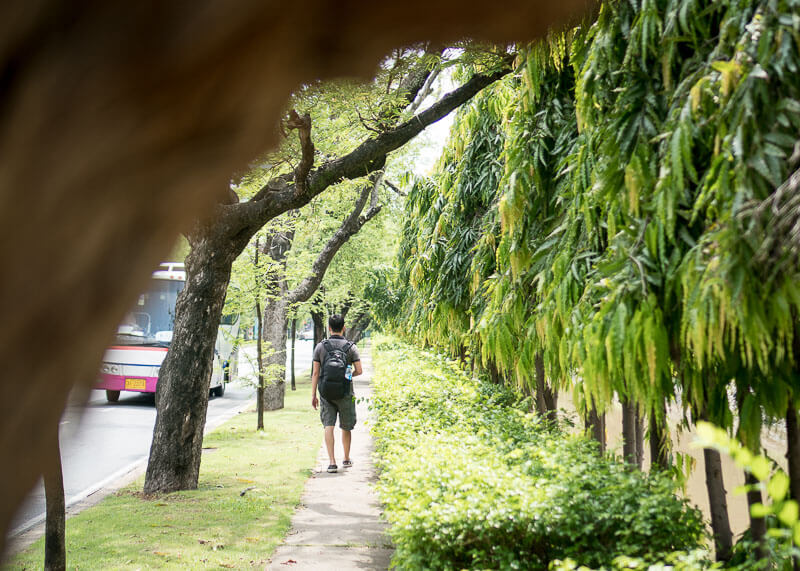 Photo was taken just moments after a HUGE ASS lizard crossed our path!

I later went home that day and realized that we came across an Asian monitor lizard. Of all places, you wouldn’t imagine finding lizards in the heart of the city, but yup, Bangkok has them. And Lumphini is THE place to go to spot a lizard. 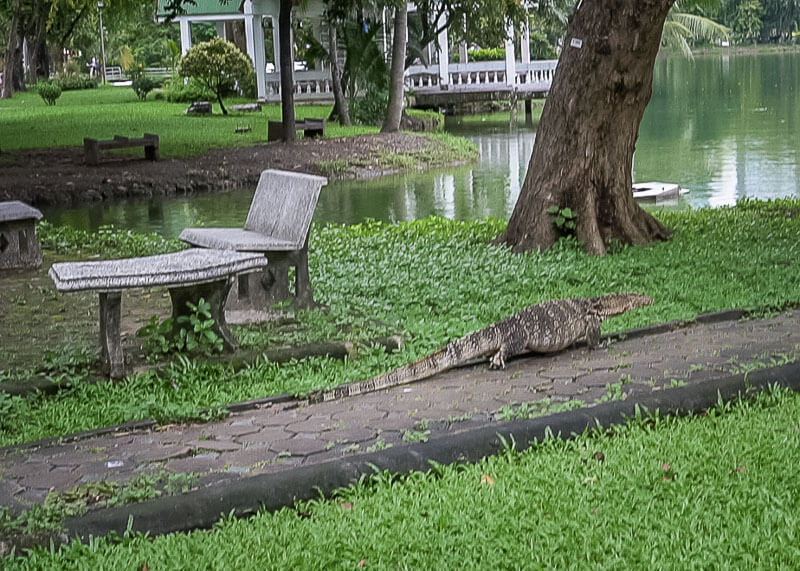 A huge Asian monitor lizard in Lumphini Park. We saw something a quarter of his size on our way to Wat Benchamabophit

Now we have one other unplanned adventure to add to our list.

The highlight of the trip has got to be Lumphini Park, where we were looking to spot huge monitor lizards. The first 30 minutes was quite dull – we saw cats, turtles and people working out, but no lizard.

But then we saw one, and we were amazed. 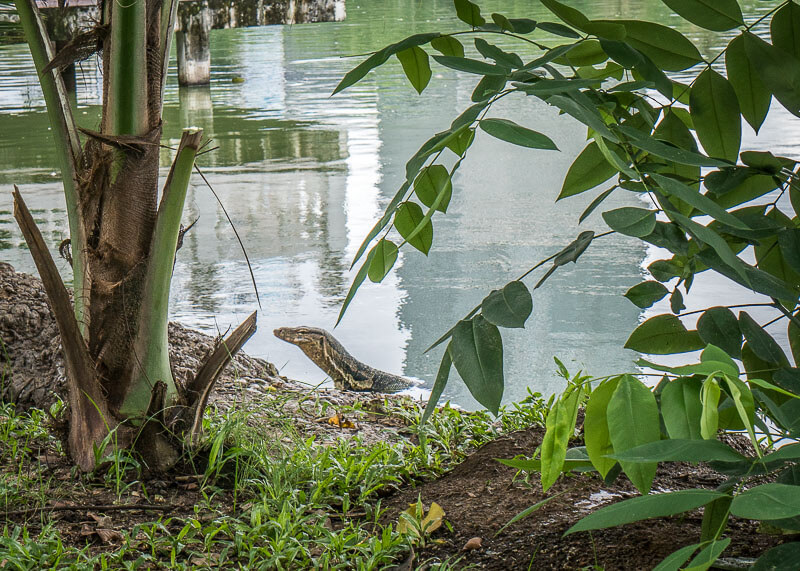 I also almost stepped on one. That was nuts. 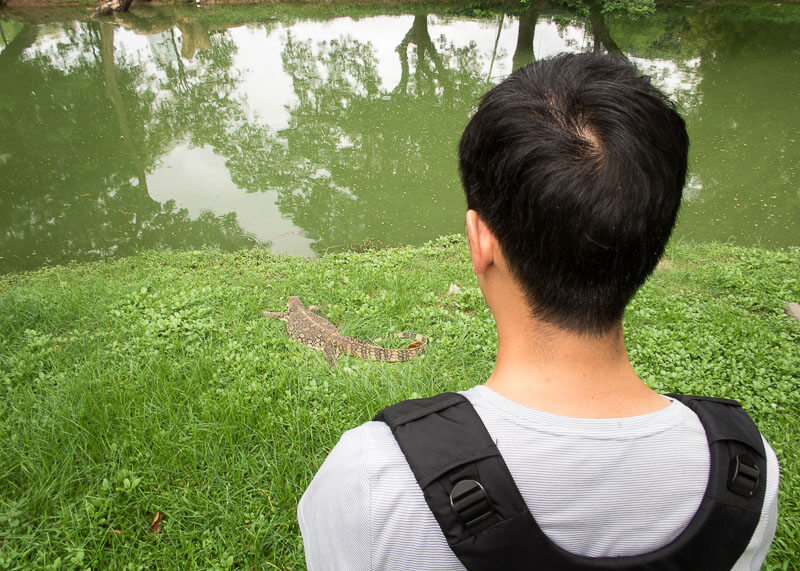 The napping lizard that almost got trampled by me. I missed the lizard because the grass in that area was super high. But I didn’t step on the lizard, which is why I am alive to tell this story!

We ate a lot in Bangkok 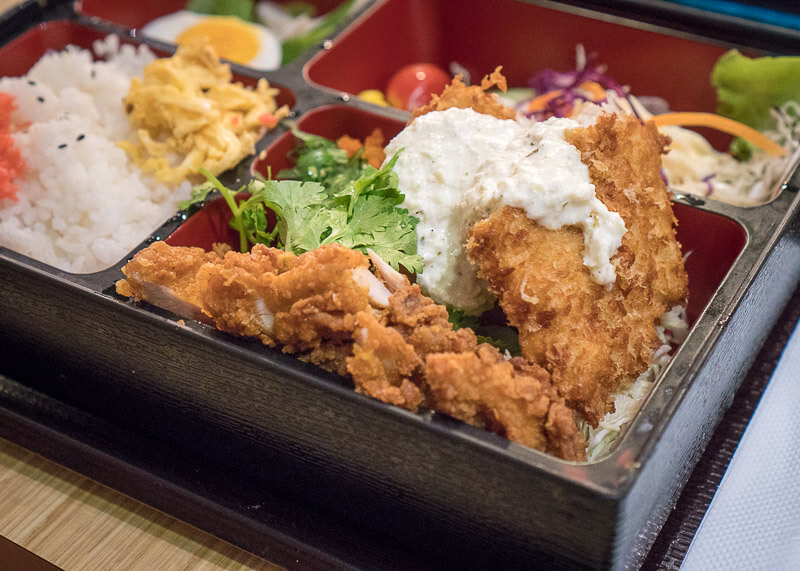 I vaguely remember food not being so good in Cambodia, so we used that as an excuse to pig out while in Bangkok. We were able to find cheap eats, although I was still dealing with weird symptoms from when I burned my stomach from too much hot sauce in Phuket. That and my question to continue to avoid MSG where possible.

The funny thing is that we don’t eat any Thai food when in Bangkok. What’s the point, when you can get a yummier and more delicious dish at half the price in Chiang Mai?

I couldn’t get customized orders in Bangkok 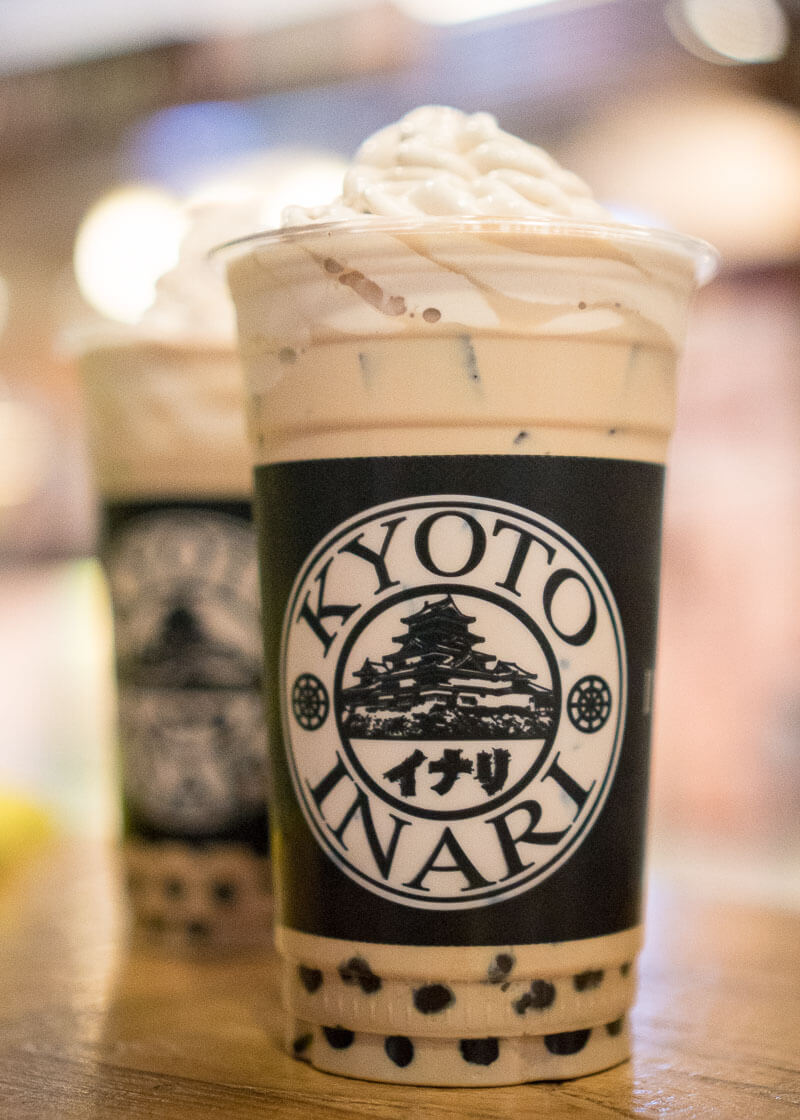 Yummy drink for only 40 baht! Comes with soft serve ice cream too! And yeah… I’m that weird Asian who doesn’t like tapioca bubbles in bubble tea

We went to a bubble tea shop and ordered their special drinks, which had ice-cream and bubbles. We asked for no bubbles, and they couldn’t accommodate the ask. They would not remove the bubbles from the drink they made in front of us. Boo!

We also ate a lot of Japanese food when in Bangkok, making me only more excited for our upcoming trip to Japan. 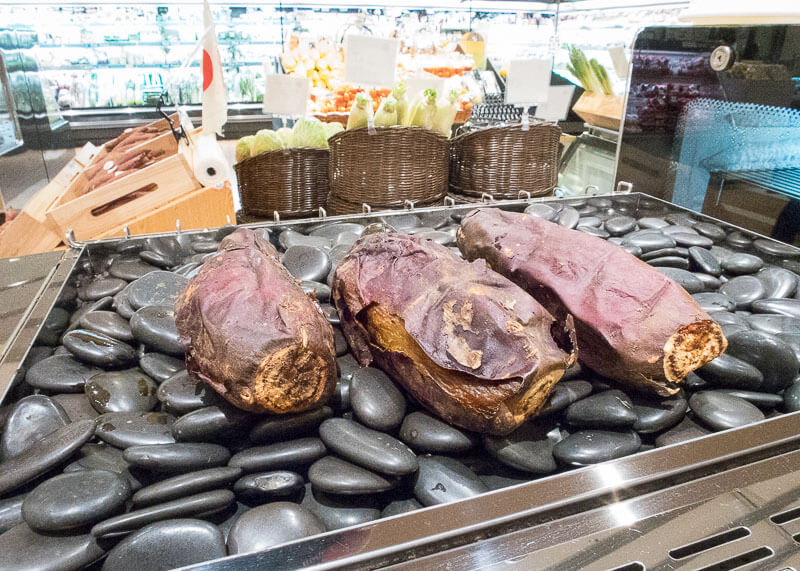 Was craving healthy simple food so much that I paid $6 CAD for half a sweet potato! They are from Japan and let me tell you, it was the most delicious and best potato I’ve ever had

While Bangkok was an enjoyable trip, we still missed Chiang Mai. People here are crankier, and Bangkok is a metropolis with its reasonable share of negatives of a big city. People aren’t as friendly, there is a more business feel to transactions, and the food is more expensive. Tuk-tuk drivers are also more aggressive… 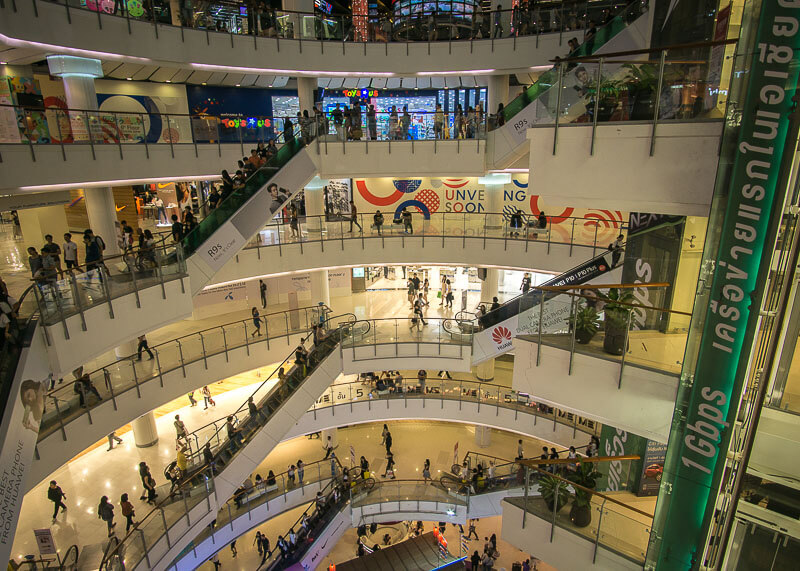 One of the many malls we stayed close to – they were all this huge!

Beggars can’t be choosers, and since we paid almost nothing for this hotel, we stayed in what felt like a crummy area. Pratunam area is known for its malls that are indoor versions of outdoor night markets. The area wasn’t bad, but still not as good as some other areas in Bangkok.

What we failed to realize is that we were only a short walk to a cluster of the best malls in Bangkok! 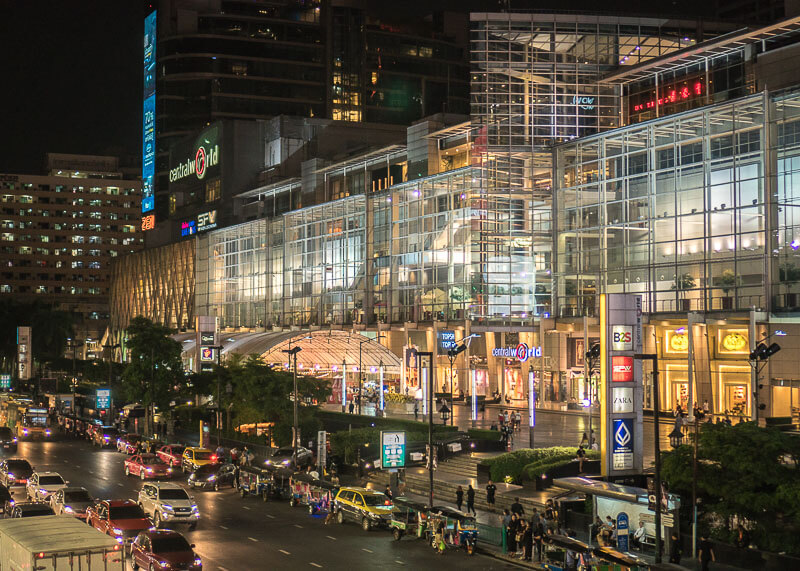 Cabs, lights, skyscrapers, and signs make for a colourful scenery

There is a lot of noise pollution thanks to tuk-tuks pumping EDM music to traffic officers using whistles to direct traffic. Buses are honking, and street vendors are yelling out their sale in hopes of nabbing customers. 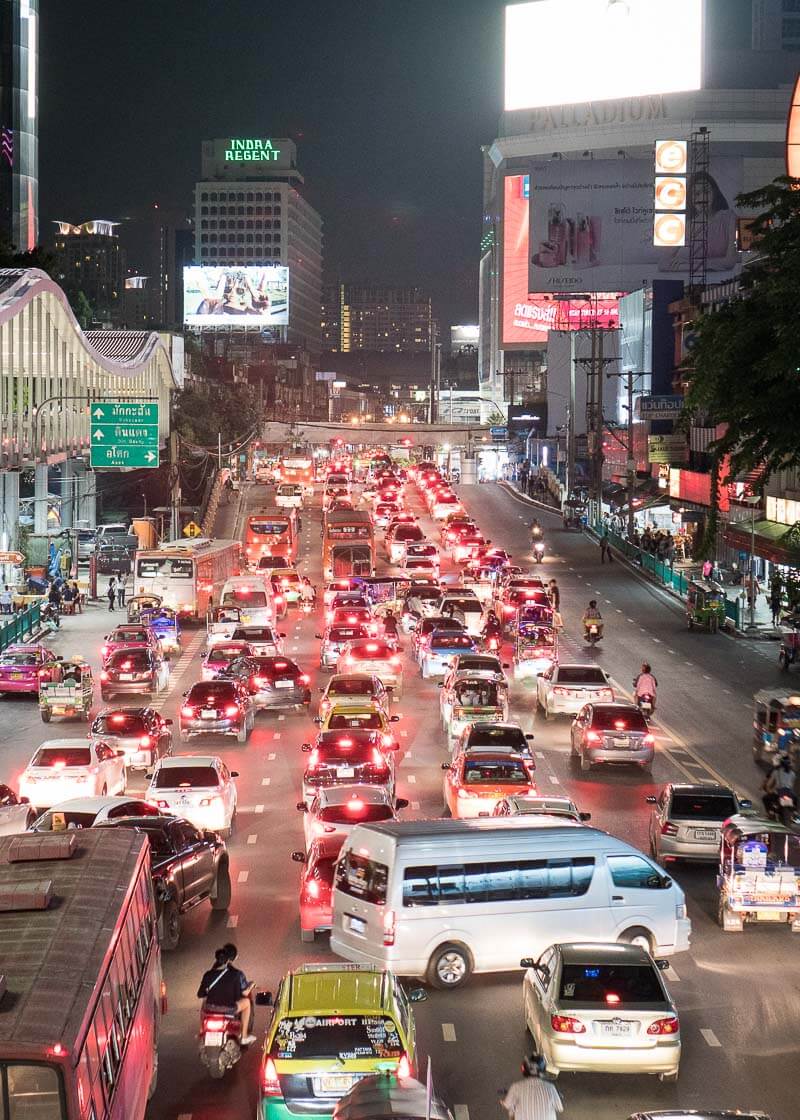 See? Chaotic. But so fun to watch

Traffic is also crazy in Bangkok, but you can stay safe by walking on the skywalks. I once saw a man on a motorbike get hit by a truck… luckily he was able to walk away!

The weather changed so quickly in Bangkok 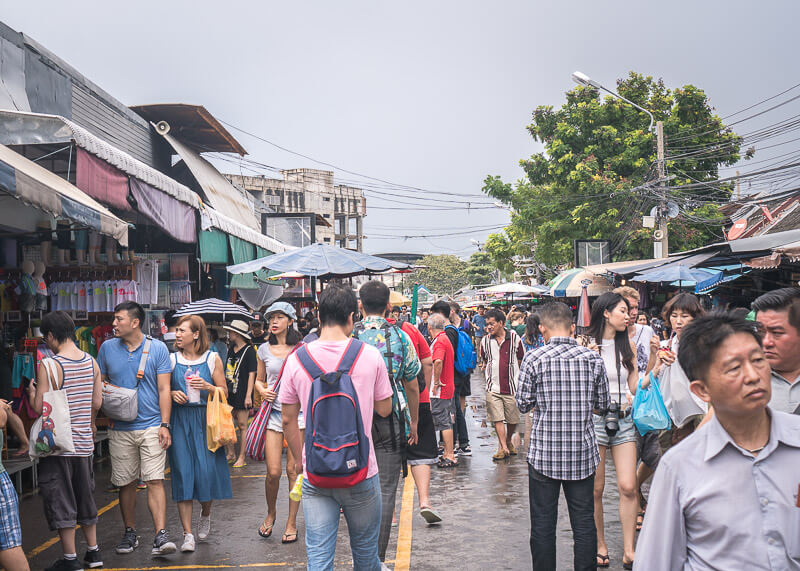 It can be sunny one second, and the next second the sky is grey and it starts pouring. Luckily, the rain usually does not last for more than a few hours. The intense heat dries up the dampness, and the city is alive again!

Vendors are quick to react to the rain. It’s interesting to see how they convert their stalls to avoid the rain and quickly set up once it stops.

It is so hot and sweaty in Bangkok though

Bumping into other people is so gross because you’ll feel nothing but a thick layer of sweat. Luckily, there are a lot of shops with air conditioning, so you can hide there to cool off.

The laundry situation in Bangkok

Our hotel had laundry services, but of course, it was expensive. Prices were something like 40 baht per shirt. In Chiang Mai, we paid 40 baht per kilo. We managed to find a local laundromat that had some weird pricing.

The laundromat quoted us 150 baht for 20 pieces of clothing. But then when we counted 37 articles of clothing, they offered to do the laundry for 200 baht. Very weird how one sock and a pair of jeans are charged the same rate.

Time to head to Cambodia 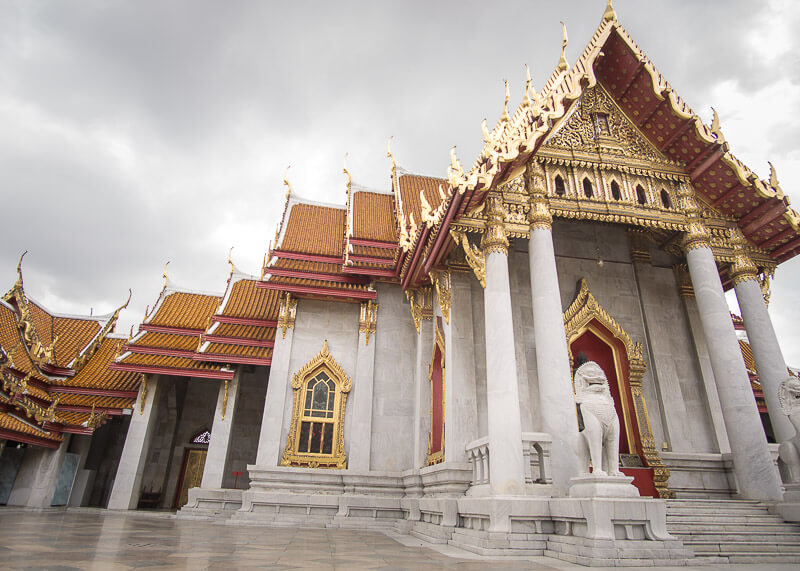 Bye Bangkok! I will miss you!

I really loved spending time in Bangkok in a way where I was just enjoying the city and not sprinting from one place to the next.

After a week in Bangkok, it was time to head to Siem Reap! 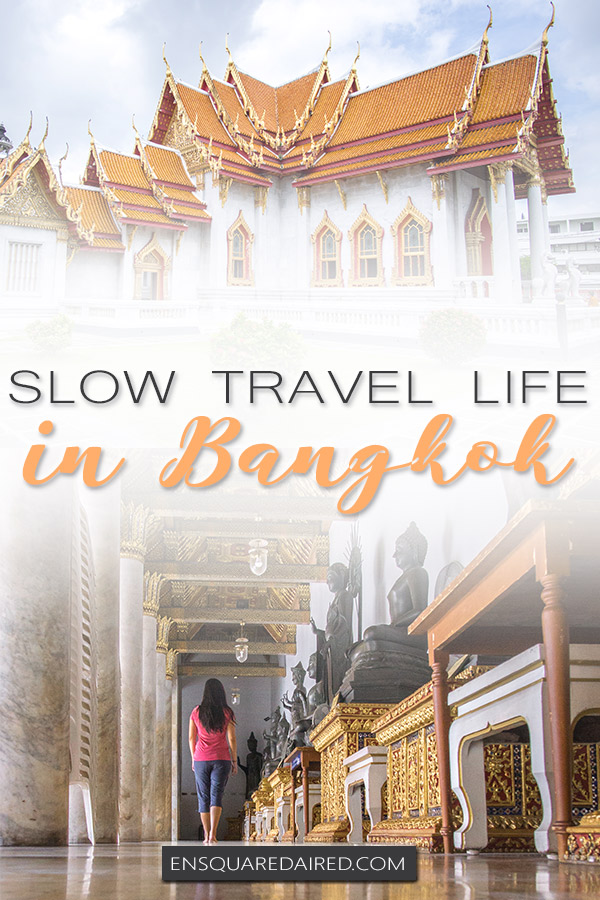