You are here: Home / Destinations / Chiang Mai Trip Blog Diaries From My Year Of Travel (Part 2) 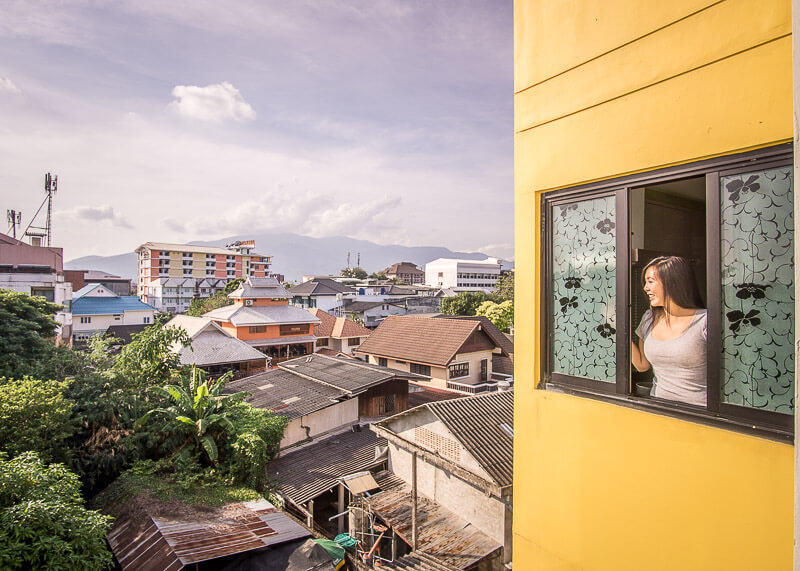 When we first planned our year-long trip, we never imagined coming back to Chiang Mai and living in this beautiful city for three months. It was a nerve-wracking decision to switch from being a nomad to finding a permanent base.

If you haven’t read part 1 yet, you should read it first here.

A place to call home 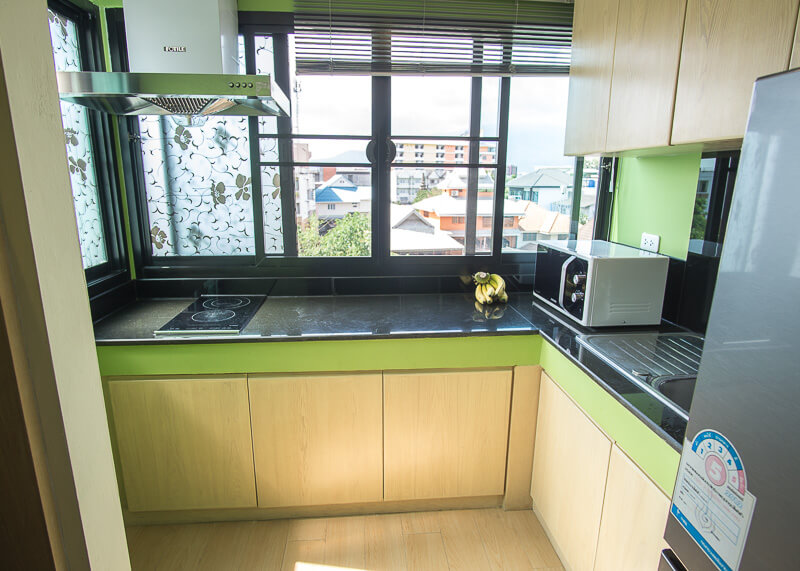 We have an apartment with a kitchen!

It’s great to have a place to call home. We could boil eggs, and we have a cutting board to cut up fruits. A reminder of the little things that we take for granted. This quiet time also gave us a chance to plan for our Vietnam trip at the end of the month.

Life in Chiang Mai is very different compared to Canada 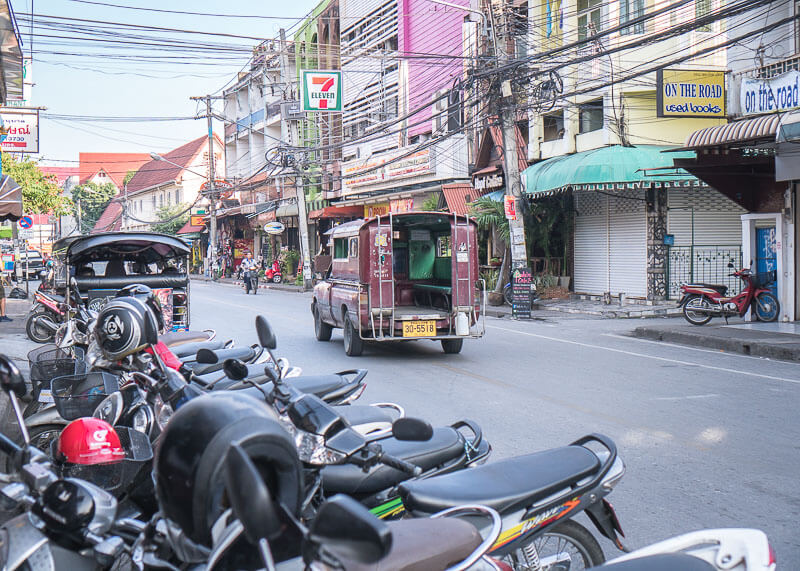 Songthaews were part of our daily life in Chiang Mai

Gary thought it would be nice to share with clips of us riding a songthaew or of us eating street food with my parents. They completely flipped out when they saw the videos and started lecturing me. They have a completely different perspective when it comes to living in Asia. To them, they’re thinking “Why the eff are you going back and trading all the comforts of life that I worked so hard to give to you?” In their mind, all they can think of is of me getting sick from the street food and ending up in the hospital. To some extent, they do have a point. 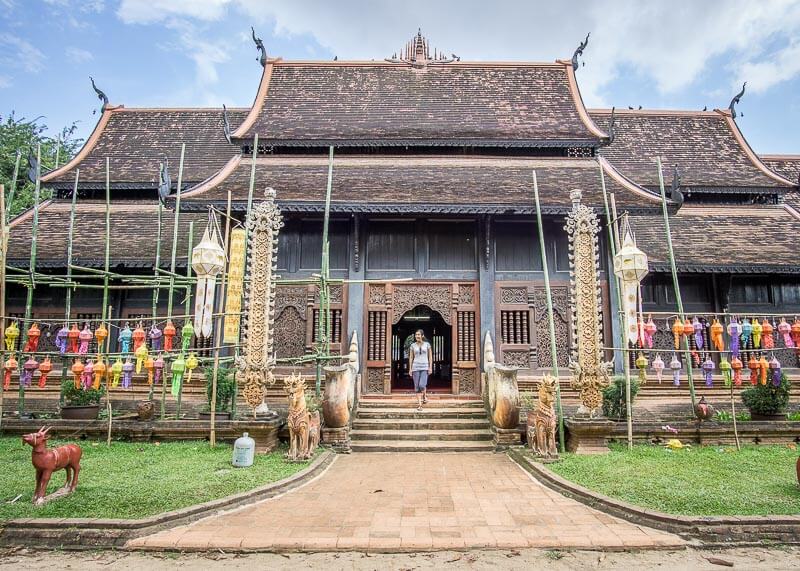 At Wat Lok Molee, one of my favourite temples

What I love most about Chiang Mai are the beautiful temples spread across the city. I always feel very much at peace and a sense of serenity at the temples.

The complexes are also so large that I become insignificant – no one notices me or pays attention to me. 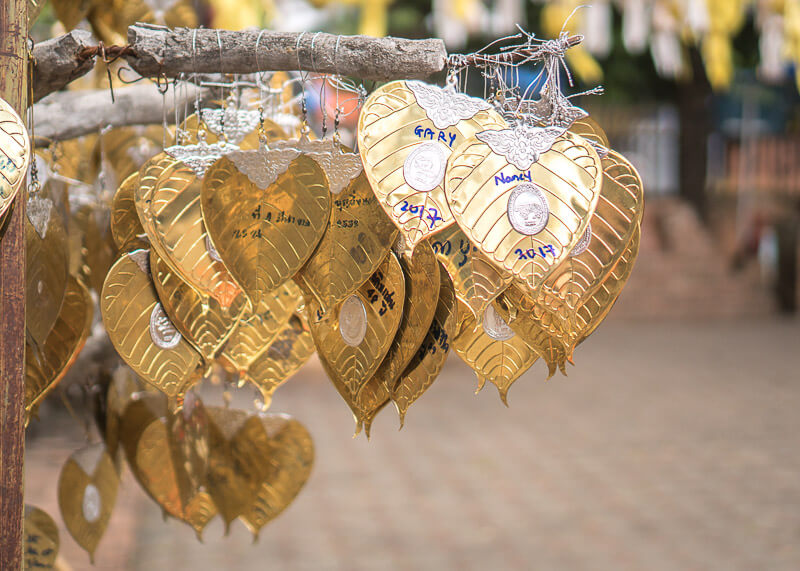 We bought two hearts at the temple. Hopefully, they will still be there when we come back one day

Be who you are, and you will attract like-minded people

We visited a famous khao soi place one day and sat next to strangers due to limited seating. It was a great conversation, and then we parted our ways.

Later that evening, we went to the North Gate night market to try Khao Kha Moo from the “Cowlady”. 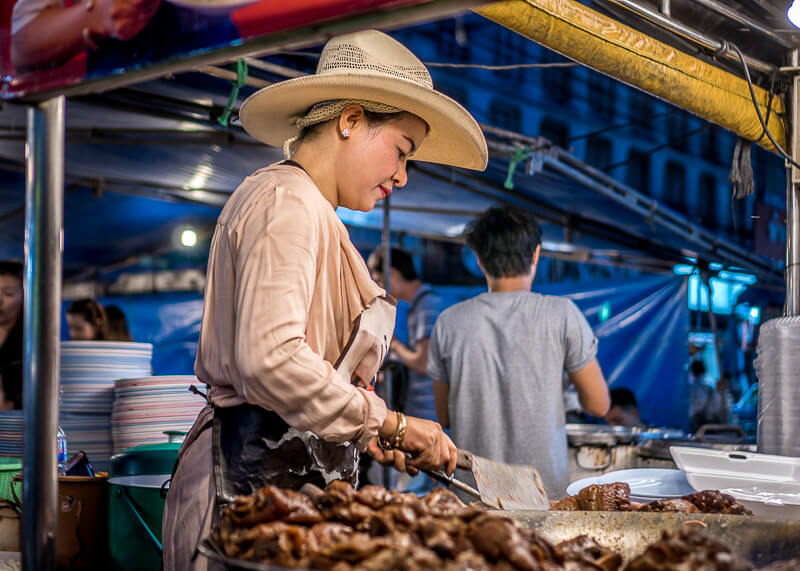 Heard of Cowlady from my friend who heard about it from Anthony Bourdin. So sad to hear that he’s gone

Low and behold, the guy we had lunch with was sitting right in front of us! Given that it was our second meeting, we were able to have a less superficial conversation, and he started talking about his decision to live in Asia. He had been working on this dream for five years, and he’s so happy to make the move to Chiang Mai. “Life is short,” he said. “I’m turning 30 soon, so I need to stop letting life get in the way of my dreams”.

Everyone I met, whether they are a lawyer from New York City or London, they all did the same thing – they quit their job to travel. Their reason? Life is too short. There’s something about being aware of death that pushes you to reprioritize what’s important in life. 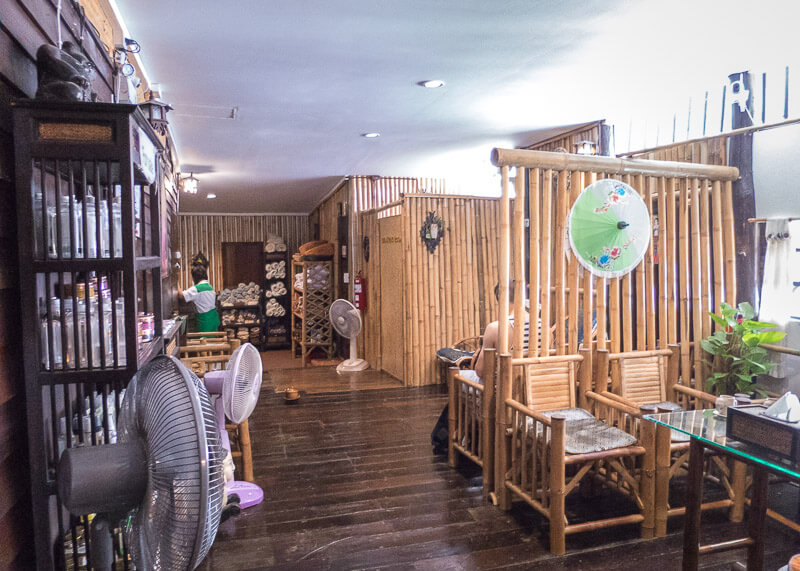 Weekly massages at the Green Bamboo

Thanks to all the horror stories I read on the internet, I was afraid to go for a massage in Thailand. But Gary insisted, so we went for something easy – a foot massage.

The experience was heavenly. It was so good that I couldn’t stop grinning like a goof afterward.

We went for weekly massages since they were so cheap (it worked out to be around $10 CAD per person for an hour). One time, I got a head, shoulder and neck massage that was so good that most of the tension was gone from my upper back. I have to admit, I was wincing throughout the massage, and there were some acrobatic moves at the end. But man, it was one of the best massages I’ve ever had. 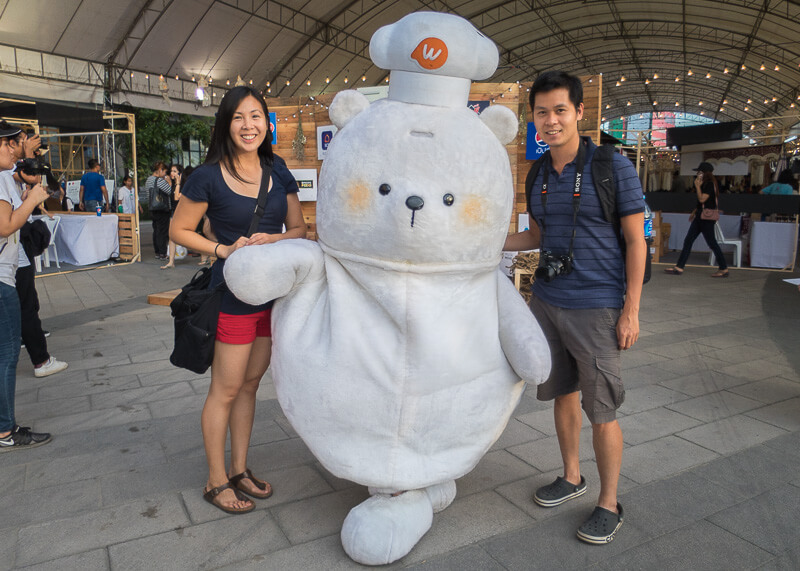 With the Wong Nai mascot where he tried to hold my hand!

We were at the Chiang Mai Festival Mall one day when we realized that a food festival was happening. 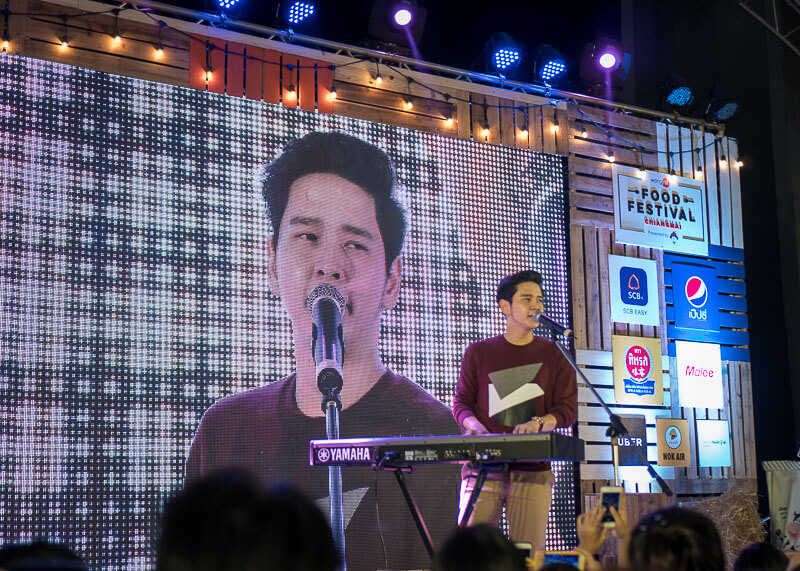 Some famous singer at the Chiang Mai food festival. The girls went crazy when he came onstage. He’s like the Wang Lee Hom of Chiang Mai. Let me know if you know his name!

It was so much fun, and there were so many delicious meals to try. It felt like we were the only foreigners at the food festival and since we look Thai, everyone spoke to us in Thai. 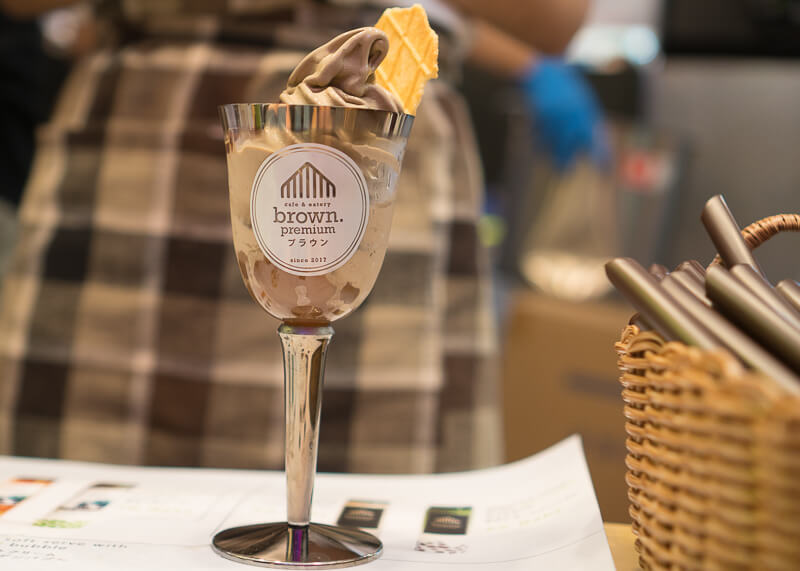 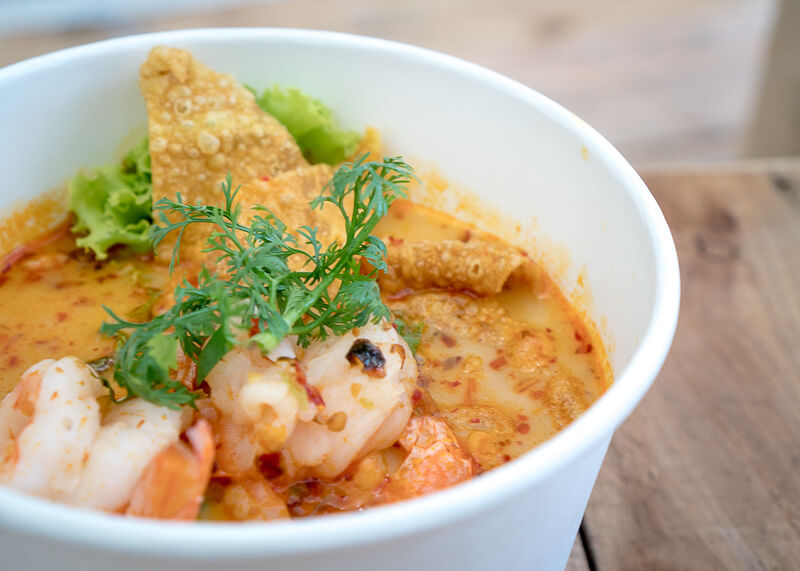 This tom yum soup was delicious! 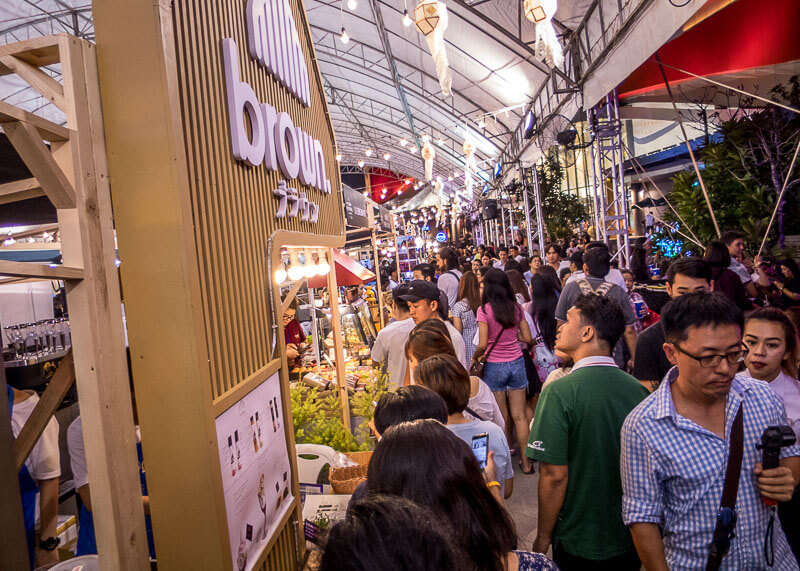 The food festival got really busy by the end of the night! Vendors were running out of food!

My favourite place to watch sunsets in Chiang Mai 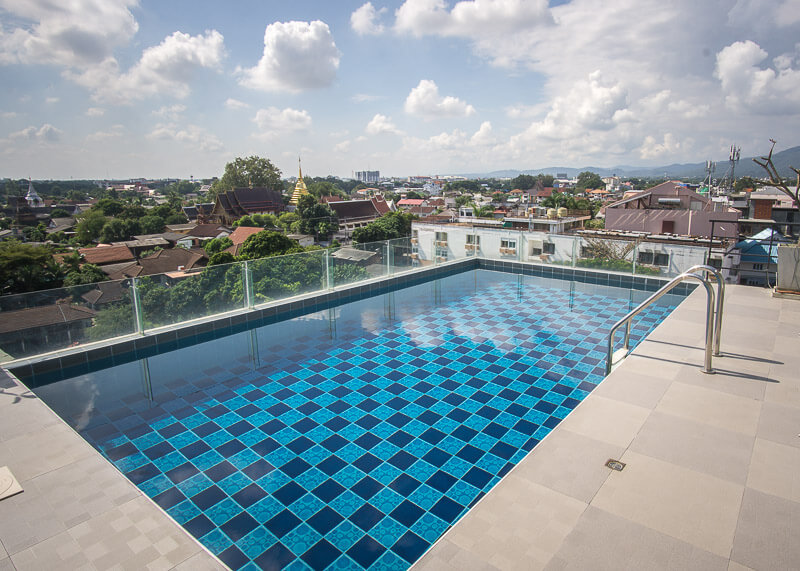 Our apartment came with a rooftop pool, so we found ourselves spending afternoons there during sunset. I will never forget the one time I caught the most beautiful sunset in Chiang Mai. There were so many colours in the sky – hues of baby blue, purple, green, pink, yellow and orange. It was magnificent and incredible to see the sun’s rays shooting through the clouds. From afar, some of the cloud formations even looked like a temple in the sky.

Passport photos are easy to get and cheap in Chiang Mai

Since our next trip is to Vietnam, we opted to take this time to apply for visas and get passport photos. We found a place and paid 100 baht ($4 CAD) for four photos. So cheap! Considering how we spent $12 in Canada for two passport photos.

A friend visits us for the first time 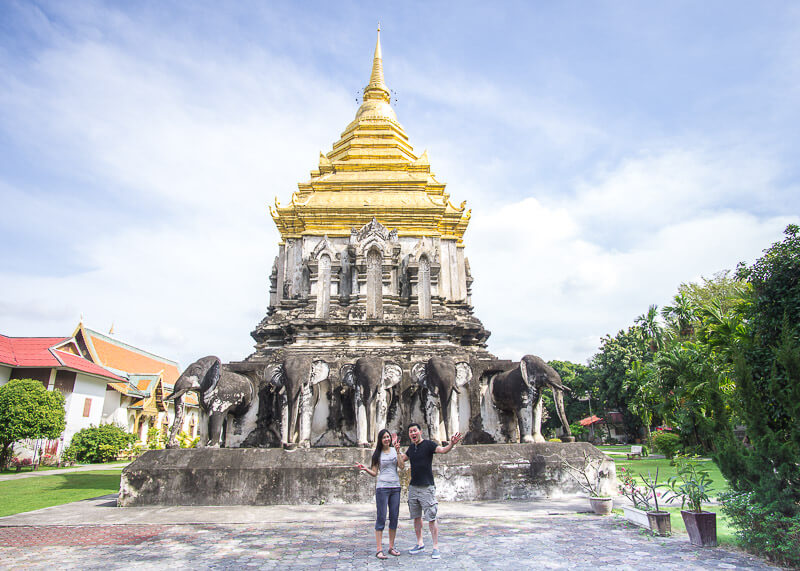 Always fun to show a friend around the city!

As luck would have it, my University friend was able to come to visit us while we were in Chiang Mai. It was nice to show him all the places that we love eating and visiting. Very cool to see Chiang Mai in the eyes of another visitor. We took him to our favourite khao soi place and ordered two bowls of Khao Sois EACH. 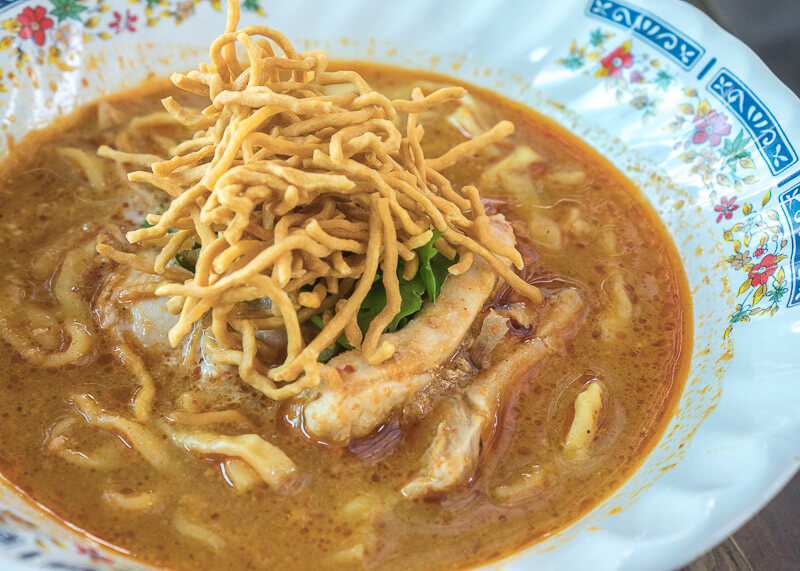 We later took him to Maya Mall where we showed him our favourite roasted chicken place which he also loved! We then walked around and hung out, which was very relaxing.

The great thing is that my friend also lived overseas and travelled for six months before coming back to Canada, so he gets this whole nomad life thing. In fact, quite a few of my friends have done long-term travel, so it’s not entirely foreign to me.

Time to head to Hanoi! 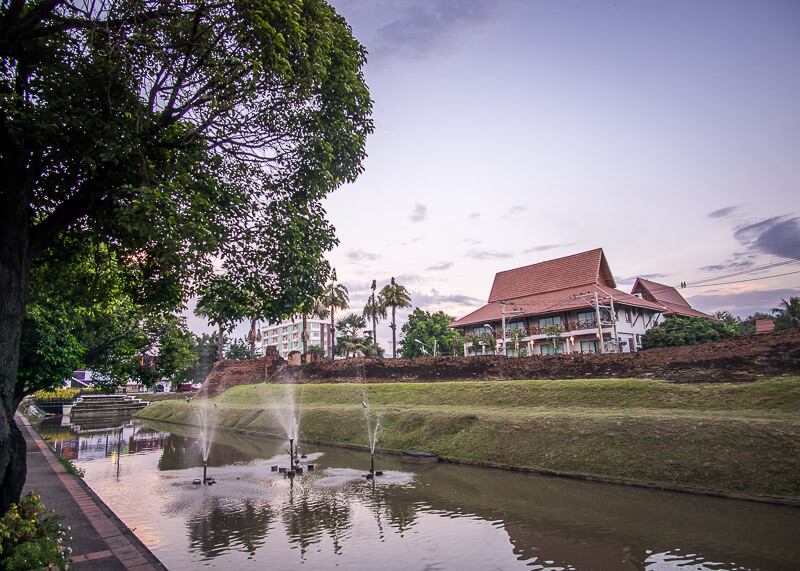 Not feeling sad about leaving Chiang Mai for the first time because I know we’ll be back in two weeks!

After spending a month in Chiang Mai, it was time to head back to the motherland.

Read Next: Visiting Hanoi During Our Year Of Travel 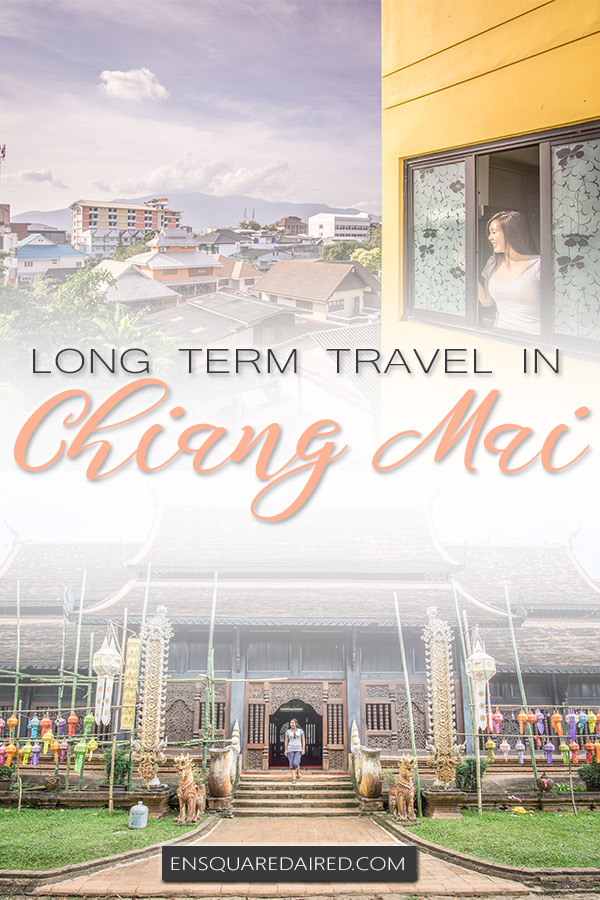