You are here: Home / Travel / A Glimpse Of The Expat Life In Chiang Mai 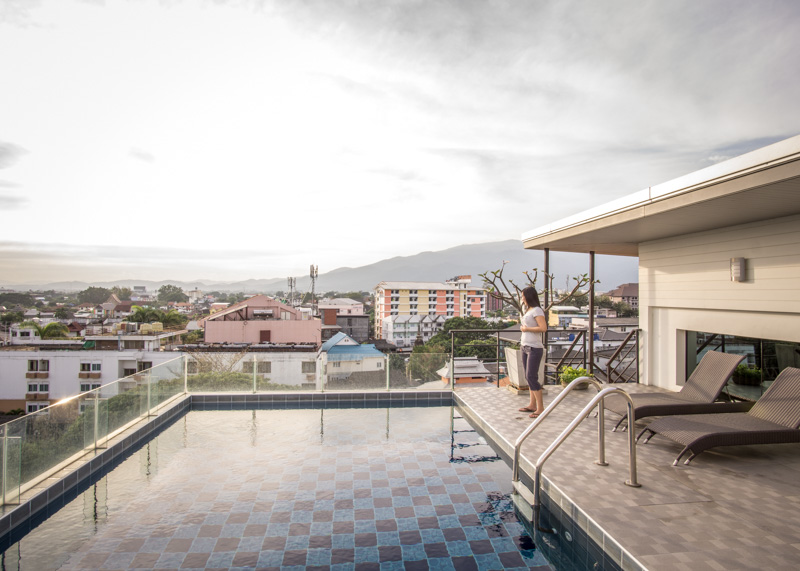 After spending two weeks in Vietnam, it was time to head back to Thailand where we stayed for the next two months. As you may recall during the second month our long-term travel, we were supposed to be in Taiwan by now. Of course, that all changed when a conversation with a Thai entrepreneur convinced us to come back to Chiang Mai.

As soon as we made the decision to live in Thailand for a few months, we were scrambling to find a place to live. As luck would have had it, Smith Suites, a place that gets booked up a year in advance by expats had some limited availability. We fell in love with the place as soon as we stepped in and changed our plans to match their availability. 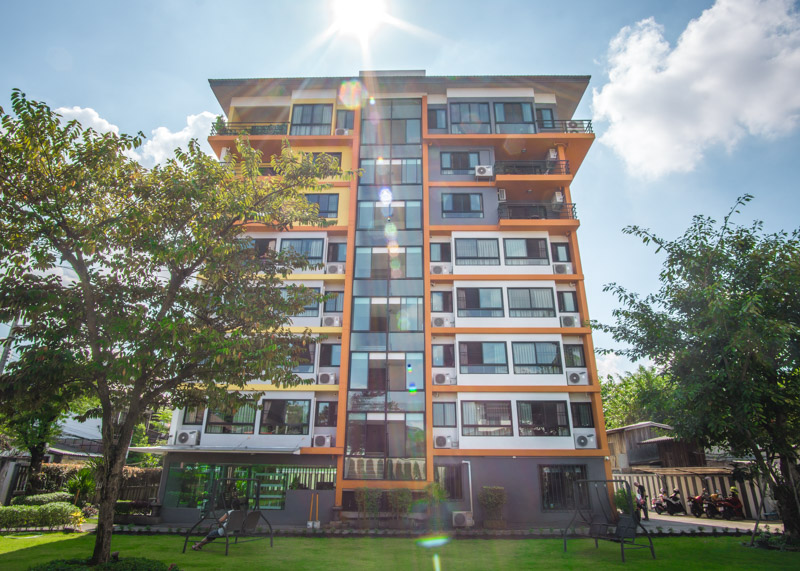 We’ve visited Chiang Mai many times by now. Once a few years ago during a month-long trip to Asia, and twice in the last few months. 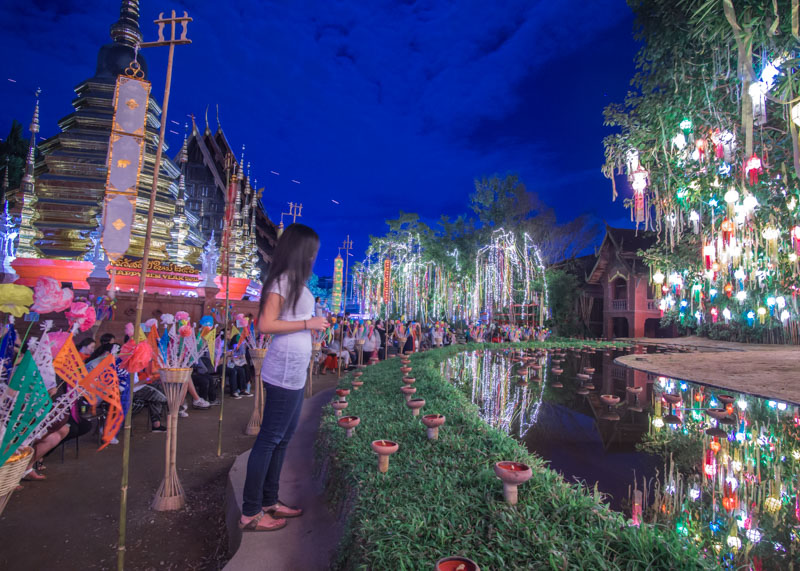 This time is different though. This time, we are really living in Chiang Mai and getting a glimpse of what expat life is like in this incredible city.

If you want to read more about what life is like in Chiang Mai, you can read about it in previous posts here:

As soon as we came back, my friend came to visit us with his girlfriend. It was a very nice reunion to be able to spend Christmas and with them, since we only see each other once every few years. In fact, the last time I saw him was when he hand modelled for one of my photos in this truLOCAL post. While we’ve been friends for many years, we’ve never met the significant others. This trip showed us very quickly how we all got along so well. I am happy to say Gary, and I found some of our eating buddies for life. 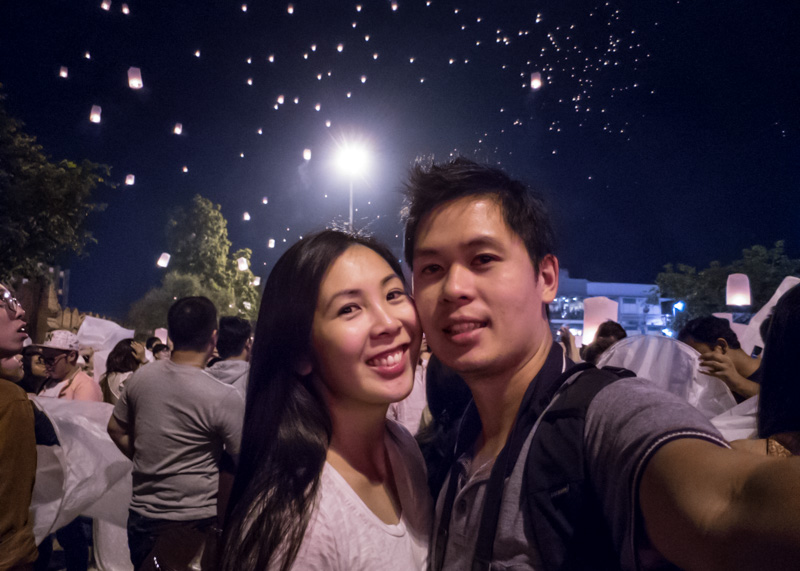 Remember that once in a lifetime experience I talked about where we got to release lanterns into the sky? Well, we found out that lantern release happens again on New Year’s Eve! You can only imagine my excitement to have the chance to do this the second time! Sadly, my friend couldn’t join us because their flight out of Thailand was at 11 pm on NYE. Only one hour before the lantern release! 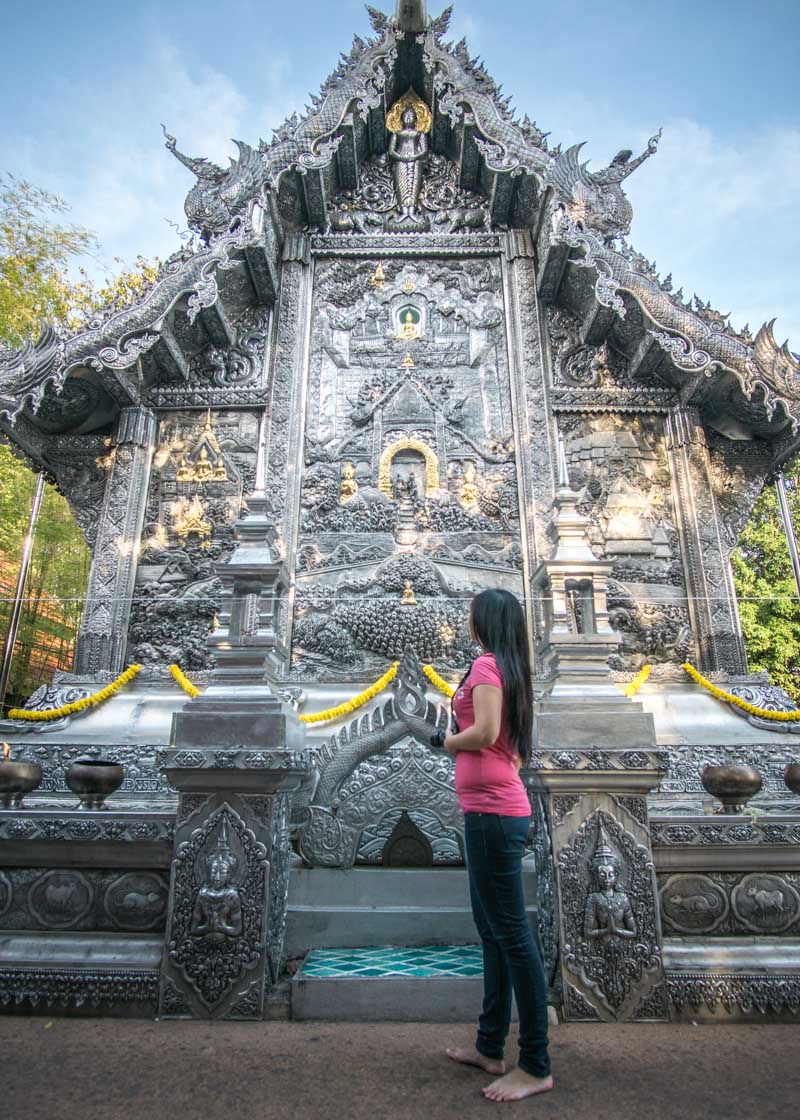 Like eating, temple hopping, planning the rest of our year of travelling. I really missed my friends after they left and missed familiarity. I missed being around Canadians. 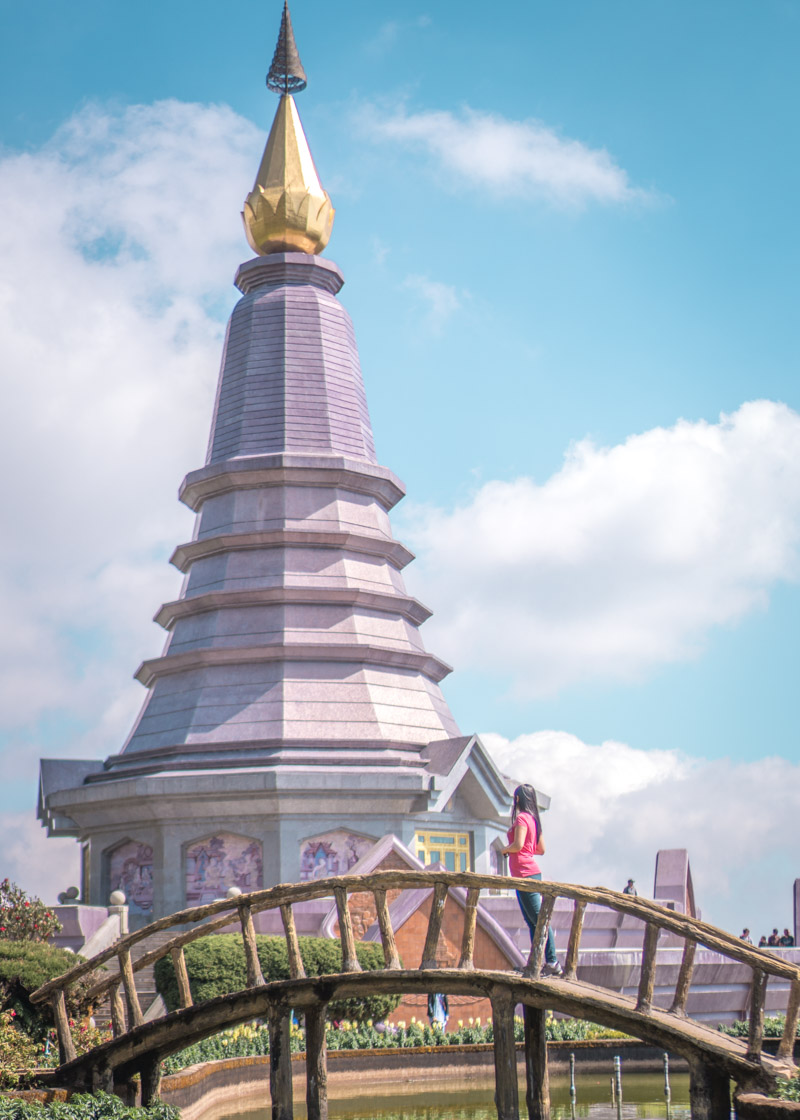 We took a day trip to visit Doi Inthanon temple 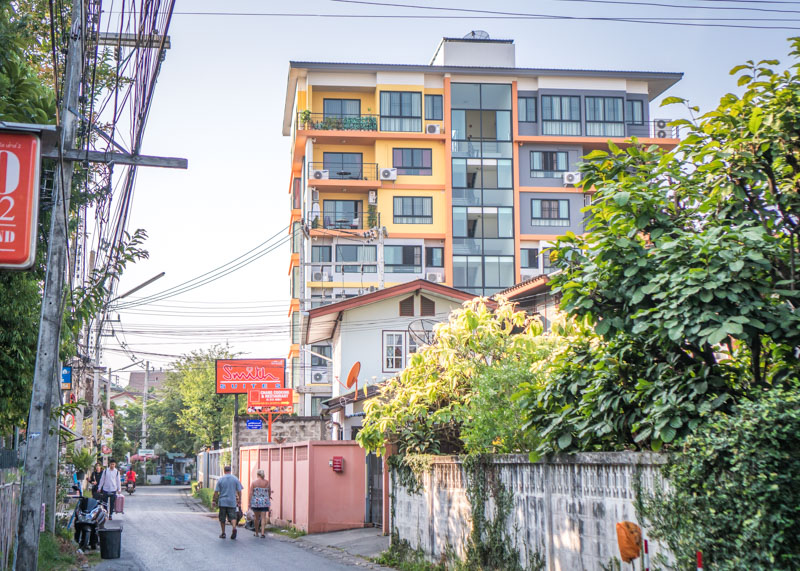 One of our neighbours walking towards our building

Our building was filled with expats, all in the baby boomer age. We watched them from our window as they clambered together every day during what the residents called “happy hour” to chat. I wanted to sit with them and say hi but didn’t because I can be ridiculously shy at times. 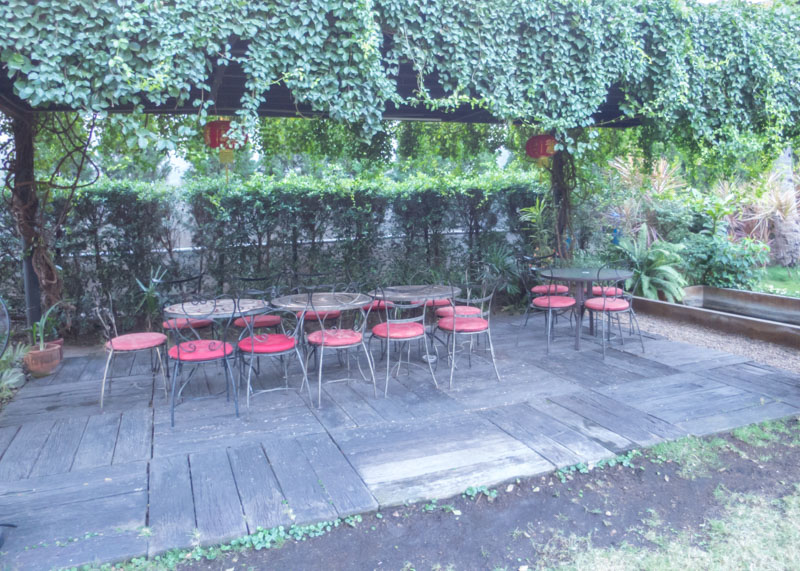 In fact, we tried to meet new people when our building held a Christmas Eve dinner

Let me tell you, no one really talked to us that night. The inside joke is that we looked like two Thai kids of the staff who crashed the party for the food. For context, few Asians under the age of 60 live in our building. You can imagine how much we stuck out at the party, despite the fact that we were in the land of Asians.

That all changed one fateful morning

We were heading out of our apartment and were right behind another man who lived in our building. As we walked through the doors, he turned around and asked if we lived in this building the previous year. We said no and introduced ourselves. He then told us that he is also Canadian (YAY!) and that our whole building is filled with Canadians! Music to my ears! He then invited us to their happy hour.

And that was the moment when things changed. We finally had friends in Chiang Mai! 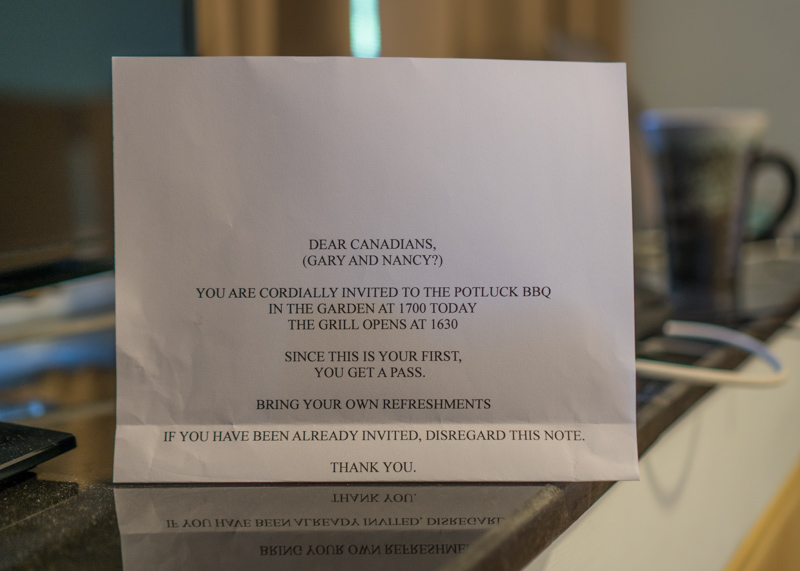 A formal invitation to the potluck BBQ – we are finally one of the cool kids!

Most days when we weren’t working on our secret project, we joined our neighbours, chatting away the evening. While it was hard to break into the group, we found a way to get to know them on a one-to-one basis. Because they were our parents’ age, they had a lot of stories to share, and we were very eager to learn. We learned about life, religion, meditation, and adventures during those deep conversations.

The kindness of Thai people is heartfelt

It’s disappointing whenever I hear or read lousy publicity about Thai people. Living here proved that media likes to distort the truth. There are bad people everywhere, as there are good people but it’s frustrating how media only focus on sensationalizing their headlines. There are quite a few interactions that touched my heart. 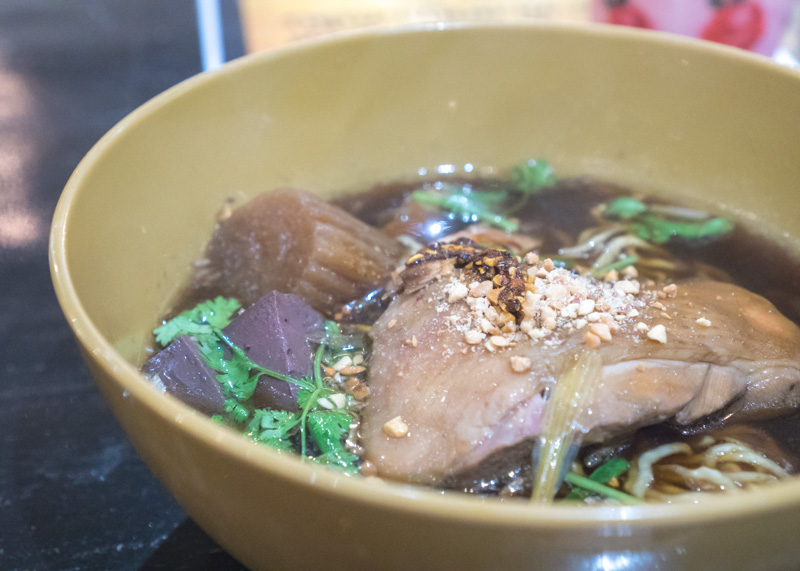 We were at the Chiang Mai food court and saw a couple sitting next to us eating a very delicious noodle soup dish. Intrigued, we leaned over and asked where they got it and they pointed the vendor to us.

After we finished the really delicious noodle soup dish, we then saw them eating some sort of dessert we didn’t recognize. As she rolled up the filling into a flatbread before biting into it like a burrito, we got curious and asked where this dessert is sold. Once she told us the location, she rolled one for us and offered her dessert to us!

The local laundromat ladies who let us play with their dogs 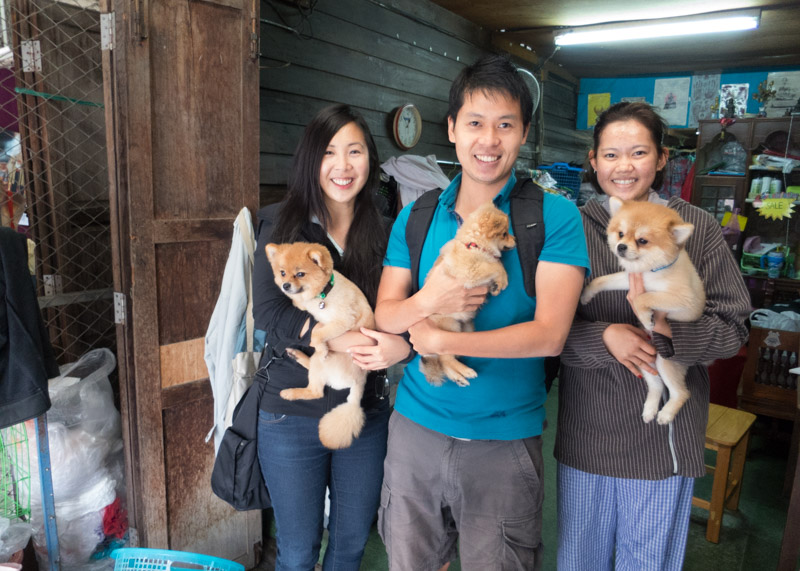 Since we didn’t have laundry in our unit, we found a local shop that would wash our clothes and fold our laundry. The ladies there are ever so nice, despite the language barrier. We often used Google translate and gestures to communicate, leaving both parties in a fit of giggles most days.

They also had three of the cutest dogs, which we always played with whenever we walked by them. Their dogs’ names were Soda, Tofu and Ton Yip (which means snacks in Thai). Soda was pregnant with puppies!

The people at Smith Suites 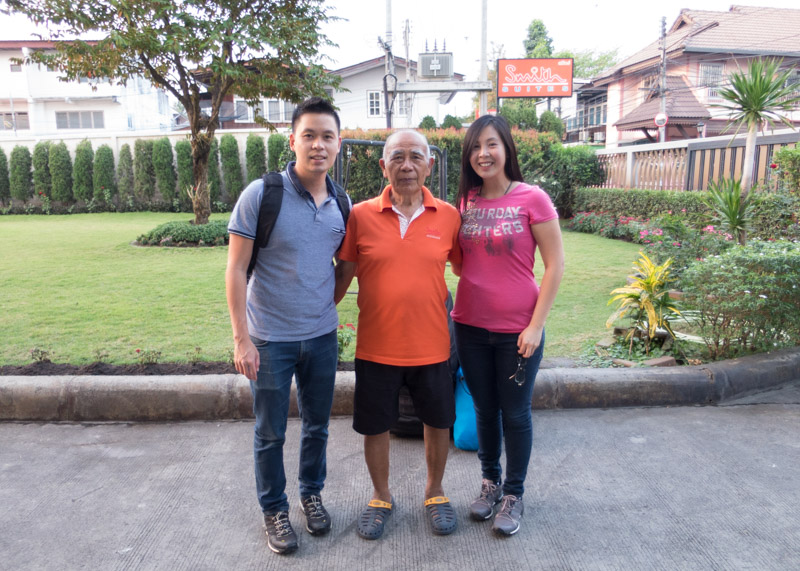 Mr. Ta Ve – he watched out for us and took care of us while we were in Chiang Mai

The owners of Smith Suites and the workers there were very kind to us. One of them treated us like he was our uncle. He taught me some Muay Thai moves once and was always looking out for us on a daily basis.

Our experience getting a haircut in Chiang Mai 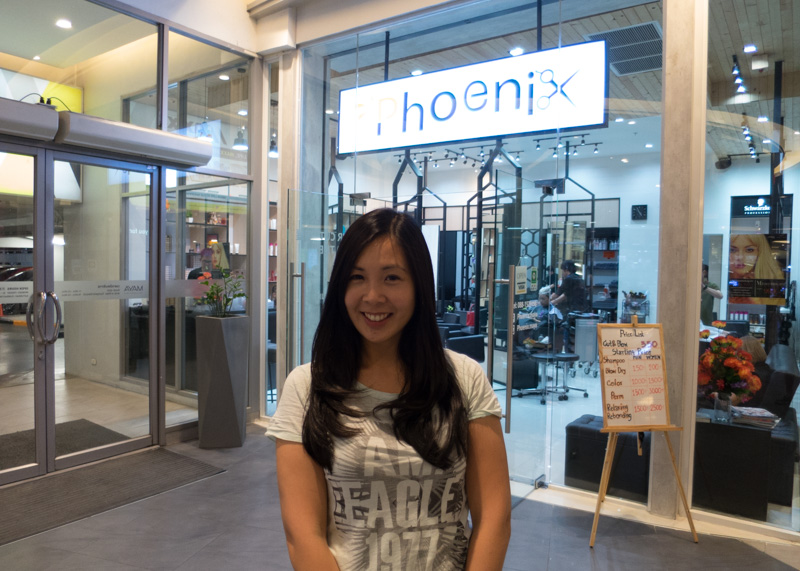 My haircut, thanks to my lovely hairstylist!

We both desperately needed haircuts and used our time in Chiang Mai to catch up on personal grooming. Getting my haircut in Chiang Mai was a very interesting experience. After looking for good recommendations on who to go to, I decided to go straight to the mall to get my haircut. I was a little bit worried but figured nothing could be as bad as the haircut I got when I was in China. For context, I was expecting to look like a Korean celebrity when I had my haircut in China, but instead, I ended up with a rat tail. I cried for days.

Anyways, my haircut in Chiang Mai was incredible. A bit too short but that’s ok. 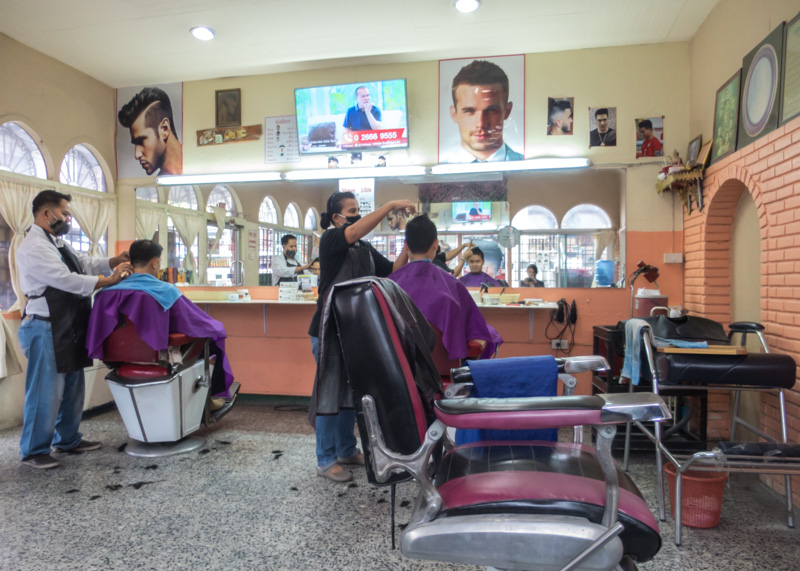 Gary took the risk and got his haircut at this salon

Gary also wandered into some shop with cheap prices and lots of locals. At first, I thought it was a disaster waiting to happen when I saw the hairstylist half listening to Gary explain his preference. The first lady who cut Gary’s hair a few months back gave him a semi-bowl cut so I was expecting the worst.

But nope, this woman gave him a good haircut, all while watching TV! 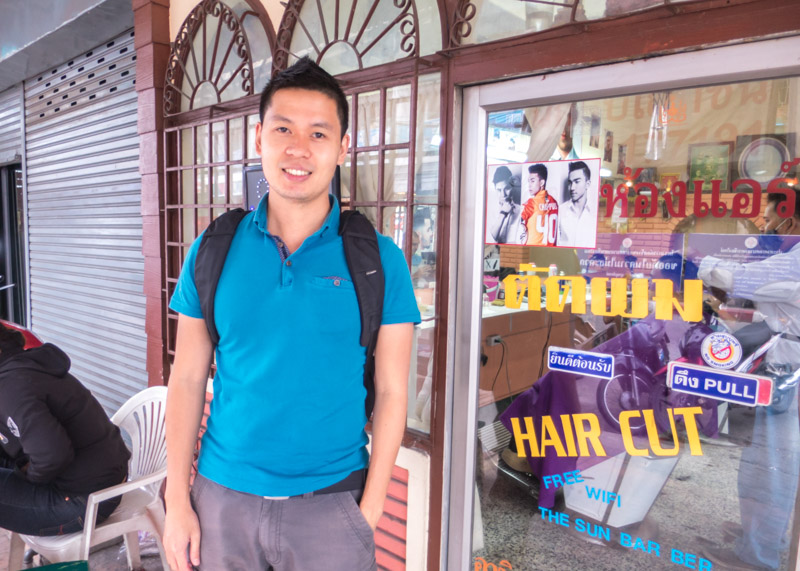 Gary’s haircut! What do you think?

Living in Thailand allowed me to see firsthand the acceptance of trans gendered people. They are everywhere and very well integrated into society. I’ve even seen transgendered high school students. One time, I was in the ladies’ bathroom when I heard a man’s voice. I turned around to try to find the guy in the bathroom, only to see a pretty lady. When I got my haircut, a lovely lady took me to the back to wash my hair. But I was startled when a masculine voice asked me to move down. I got over it pretty quickly and enjoyed a relaxing head massage. Seeing how they are so accepted and integrated into society made me like Thailand even more. Their acceptance of trans gendered people is a reminder that we are all human.

Eggs are not stored in fridges in Thailand 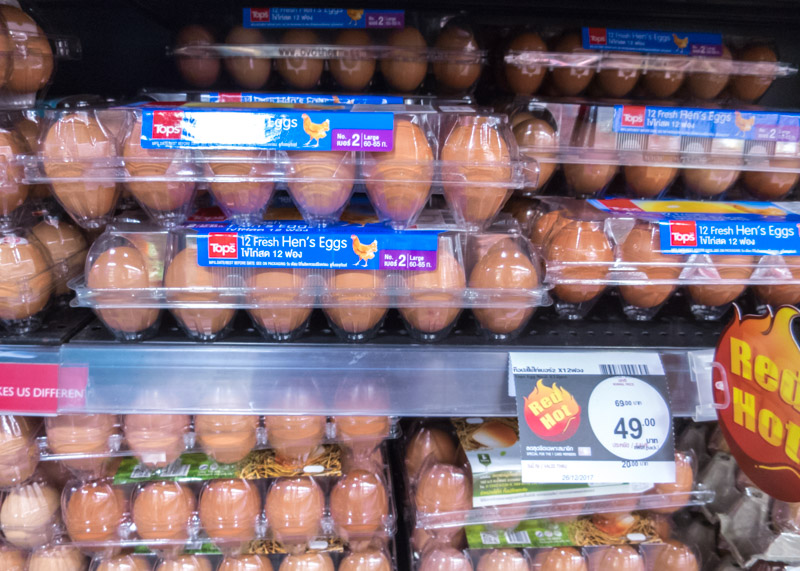 How eggs were stored in Thailand was a subtle reminder of how the rest of the world does things differently than North America. Like storing eggs at room temperature is much more common than I realized. Eggs also only have a shelf life of two weeks, likely because they are not stored in the fridge.

I had a weird incident while eating an egg. After biting into an egg, I realized the texture was off so I spat out the egg. I examined what I ate, only to realize that the egg I was eating had a tiny embryo…

One man was the spitting image of Gary’s relative 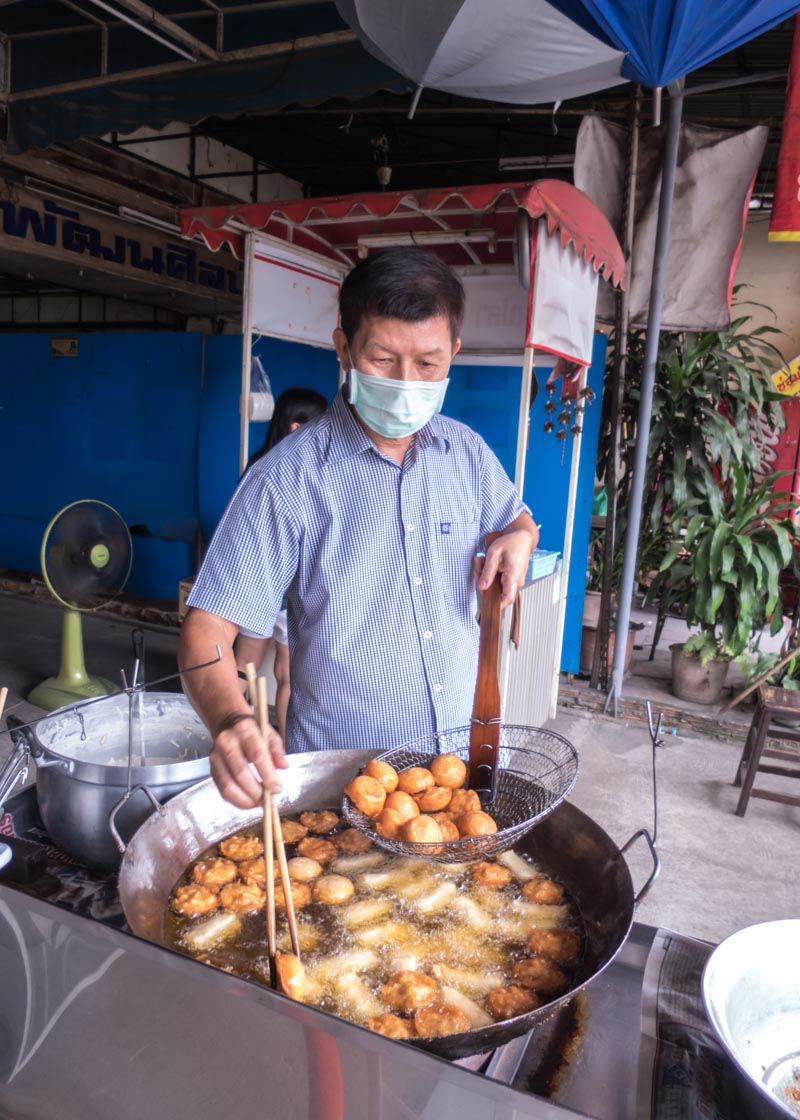 I couldn’t help but think about how different their lives were, mainly because of where they were born. Gary’s relative had the chance to build a very successful career in the US. Fate had different plans for this man.

It was a powerful reminder that a huge part of our success is attributed to the privilege we are born into thanks to the ovarian lottery. It’s a very humble reminder to be grateful for the cards that we are dealt with and be empathetic to those who didn’t have the opportunity.

Gary’s relative also wears a surgical mask to work, but in a very different and well-respected profession. Crazy…

Before we knew it, two months flew by, and we were saying goodbye to our dear friends 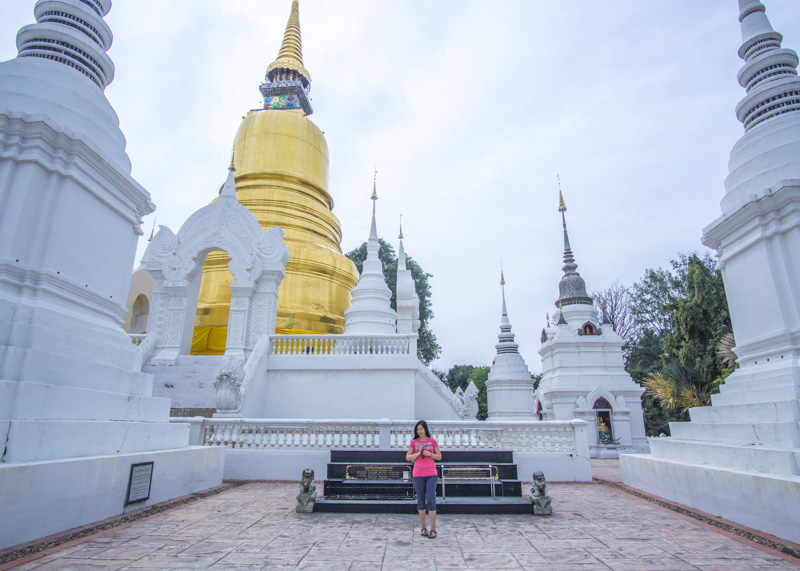 Chiang Mai, the place that will always be my home

I can’t tell you how sad I was to be leaving Chiang Mai because I really don’t know when I’ll see them again. They touched our hearts in ways I couldn’t express.

It was tough to say goodbye to the people who we saw almost every day, from the laundry lady to Mr. Ta Ve, to the woman who cooked our healthy meals.

The last Thai person who helped us was the Grab driver that dropped us to the airport. Once he stopped the car, he rushed to help us load and unload our luggage into the car. He bowed with respect and was surprised when we gave him a tip. That is Thai people for you. I already miss the hospitality of this fascinating country.

But we had big plans to explore Australia and New Zealand. After all, how often are we on this side of the world for this long? 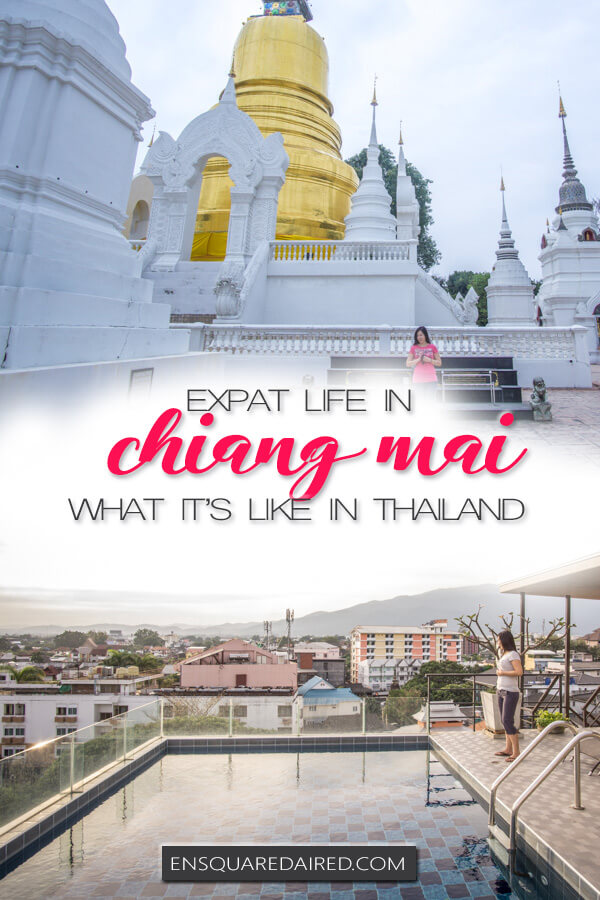 What You Can Expect At The Chiang Mai Train Station

What You Can Expect At The Chiang Mai Train Station