You are here: Home / Destinations / What You Can Expect At The Chiang Mai Train Station 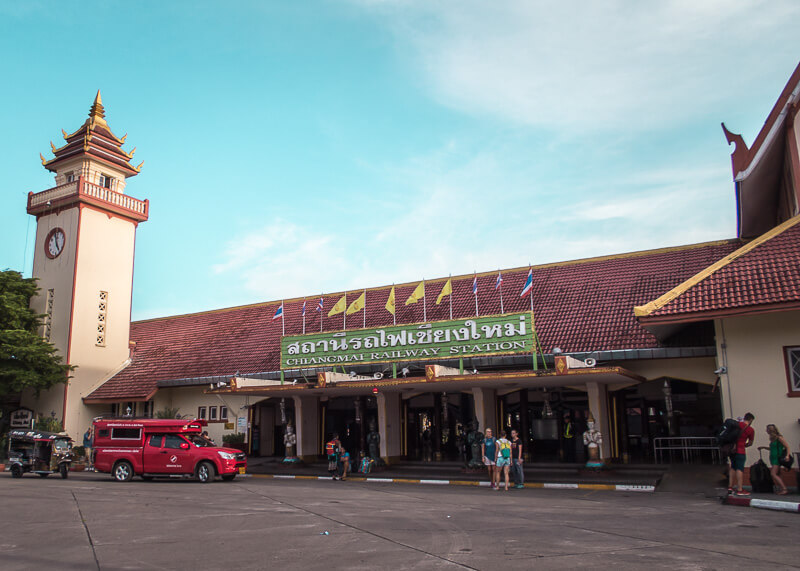 If you’re planning to do some train travel throughout Thailand and you’re feeling nervous about what to expect with Thailand train travel, then this guide is for you!

Trust me, I was super apprehensive when trying to plan out my Thailand travels, especially when I knew that Asia’s standards aren’t quite the same compared to Western countries. But let me tell ya, I was pretty impressed at the ease, safety and convenience of travelling through Thailand by train.
In this guide, I will share with you tips to consider when visiting the Chiang Mai train station, along with my personal experience so that you know what to expect when you pass through this train station.

Like everything else in Chiang Mai, this train station is pretty old and has been operating since 1922 by The State Railway of Thailand. Over one million passengers pass through the Chiang Mai train station on an annual basis. That’s nuts considering how the size of the train station.

Kim from our apartment arranged a songthaew ride to the station for 120 baht. It’s weird that a Tuk Tuk ride would cost about 150 baht, considering how the vehicles are much smaller and a cab ride would have been cheaper.

First thing’s first! Find some snacks to take on the train! The last time we were at the train station was late at night. It was dark, rainy, and all we remember were the dozens of cab drivers, all vying for our business. The train station looks much bigger and safer in the daytime. 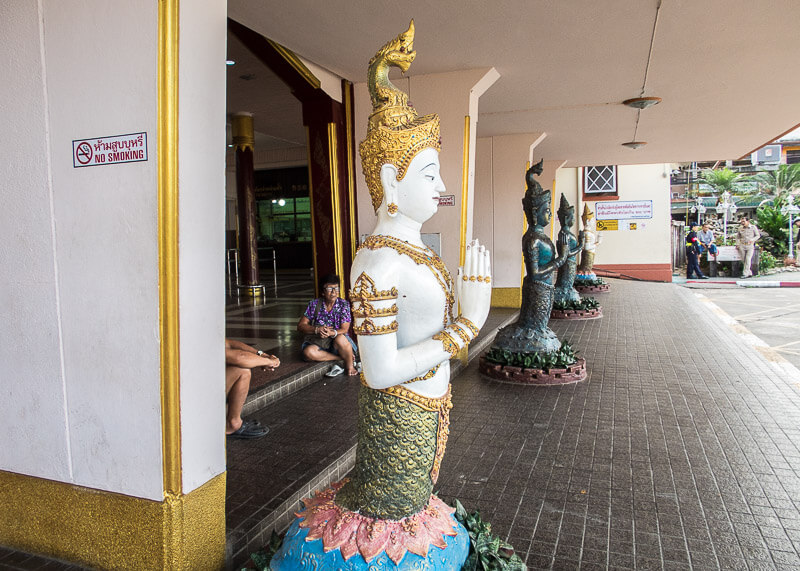 Buddha figures guarding the front of the train station 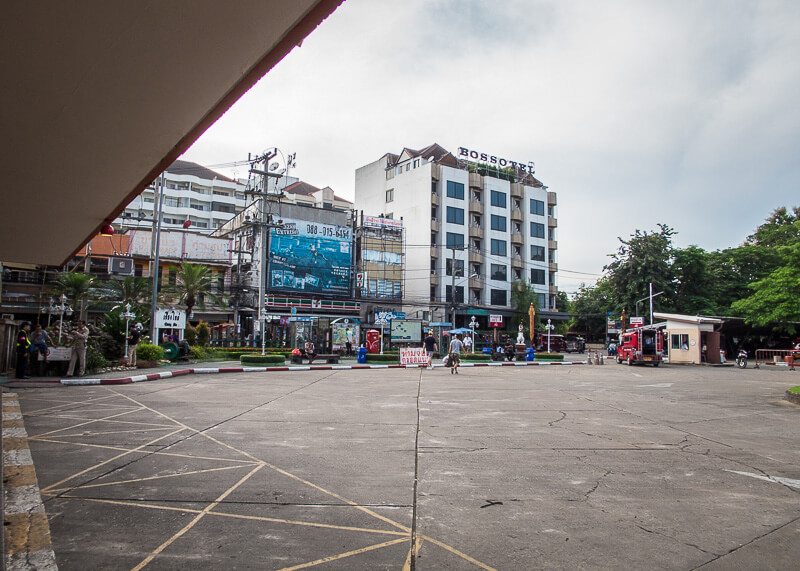 The empty parking lot that is filled with taxis if you arrive by train, especially at night. 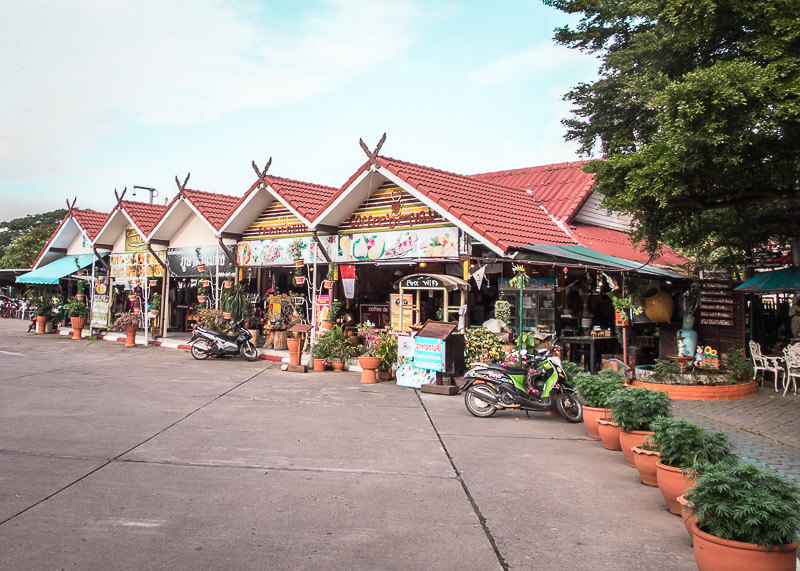 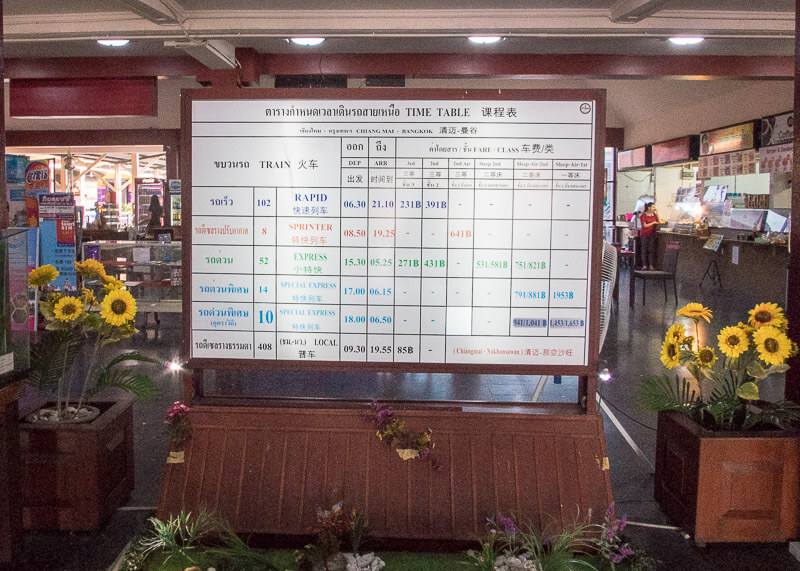 The train schedule on a whiteboard… haha 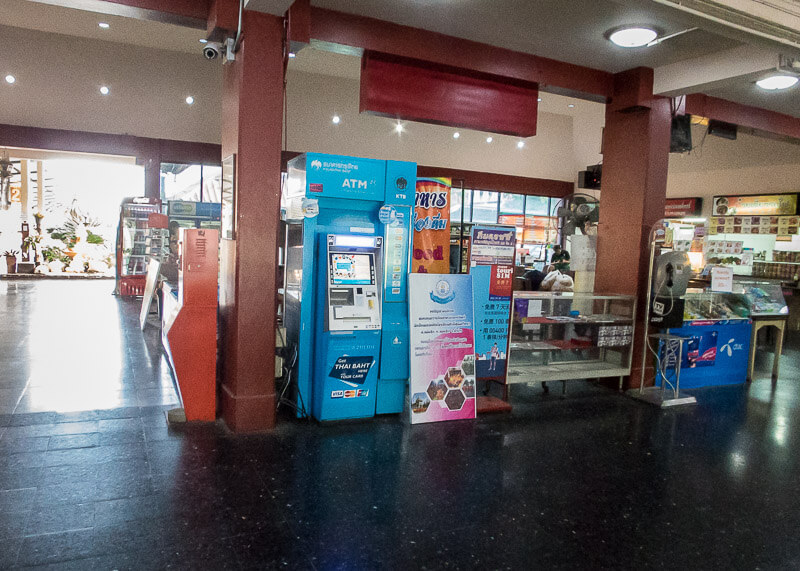 There is an ATM machine and a place where you can top up your SIM card. We usually topped ours in stores

While there are little stores just outside the train station, we don’t see anything appealing and decide to wander the area. Our wandering came to a complete stop when we found a 7-eleven! Time to stock up on some snacks! 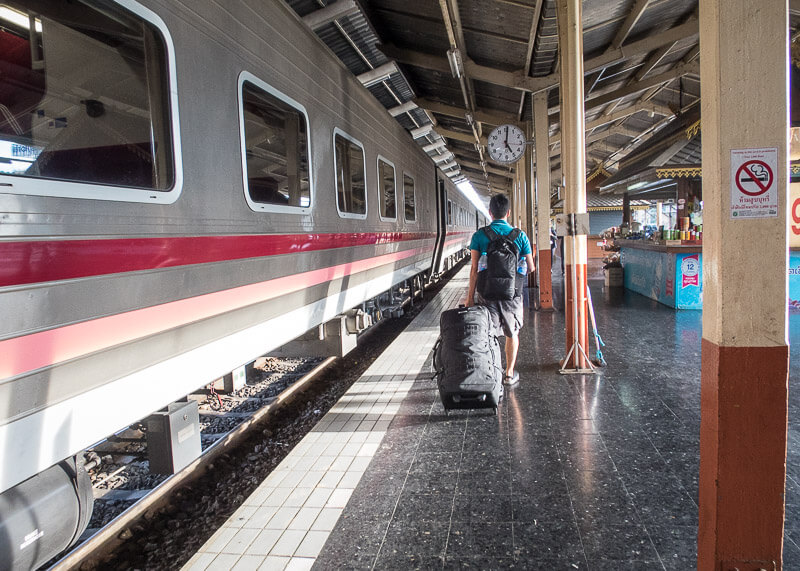 Heading to board our train! What train platforms look like at this train station 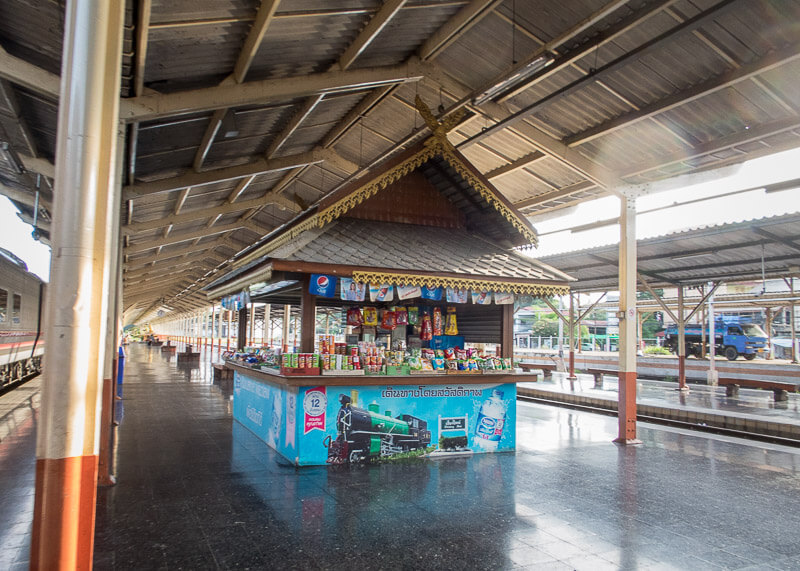 In case you forgot to stock up on snacks, there are stalls available right before you enter the train. I took a peek at the prices and they were quite reasonable if you needed to purchase something last minute 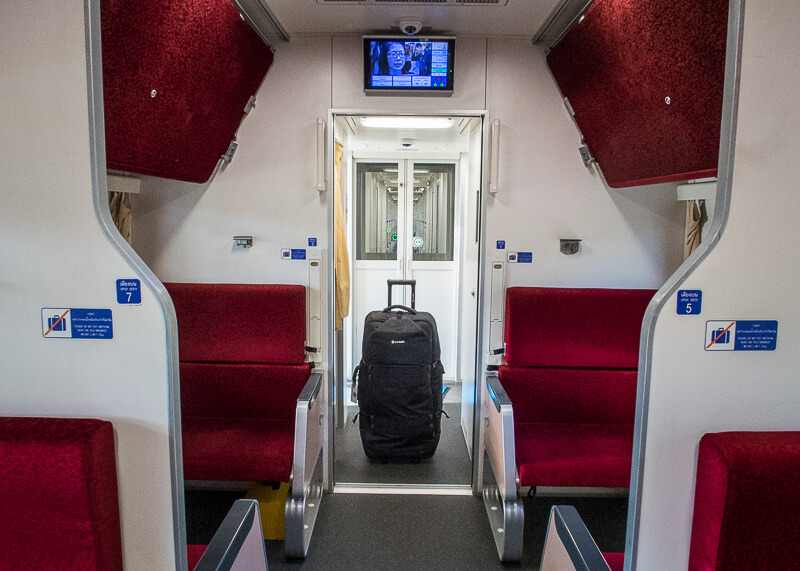 We are the first passengers on our train! 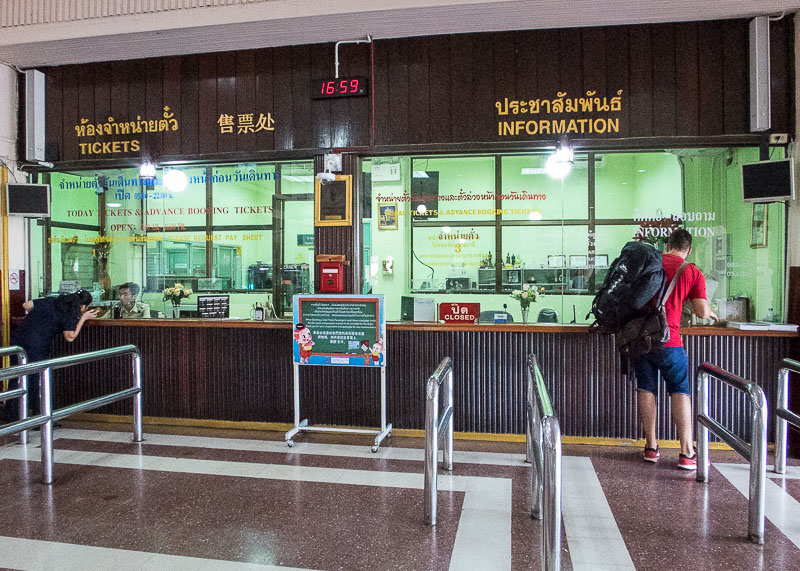 You can buy your tickets at the station

Can you store your belongings at the Chiang Mai train station?

There is a section where you can leave your luggage. I couldn’t find it though, nor did I feel the need to leave our luggage.

Can you find food at the Chiang Mai train station?

There are some food vendors just outside of the main train station, but there’s also a 7-eleven across the street, which is a great place to stash up on snacks.

Be prepared for a long wait in line though since everyone taking the train probably has the same idea as you. 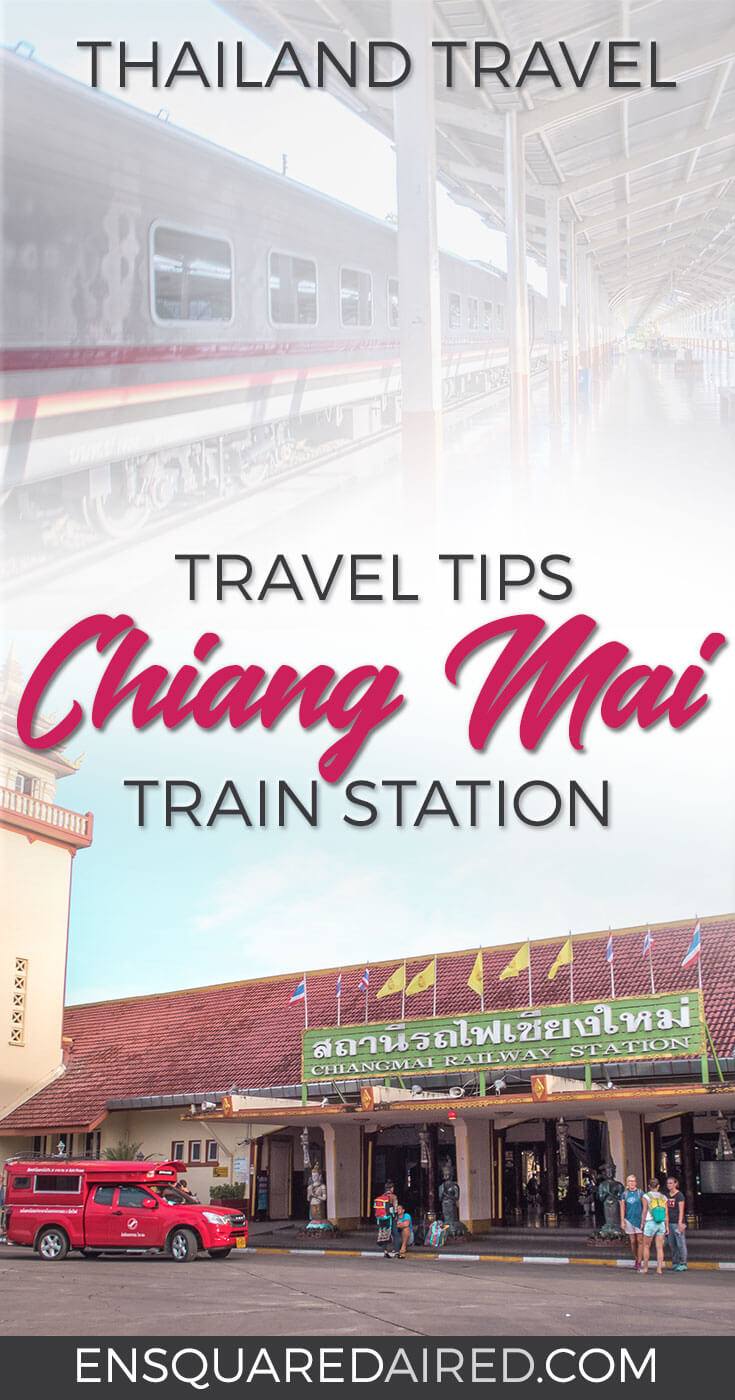 Previous Post: « Ninh Binh Travel Blog | One Of The Best Places To Visit In Vietnam
Next Post: Hanoi Trip Blog | Being Scammed For The First Time In Hanoi »