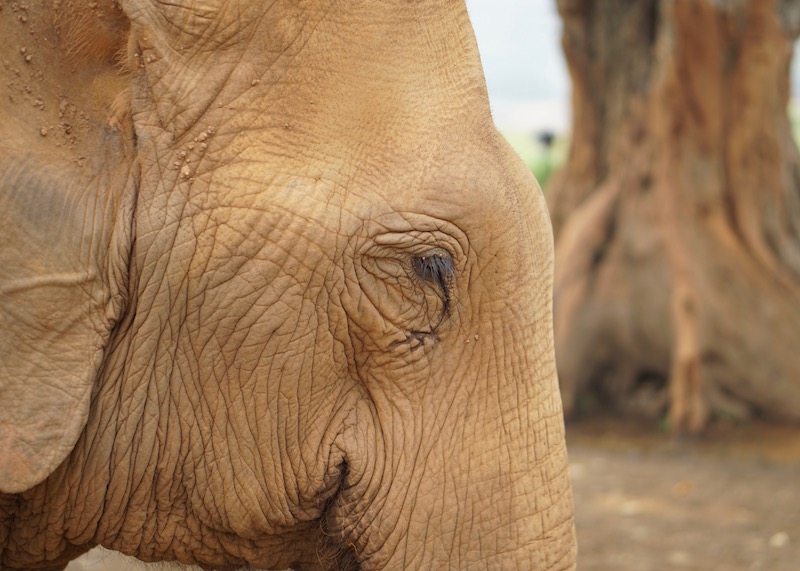 Elephants are top of mind when one thinks about travelling to Thailand. But do you think about ecotourism, and how you want to interact with elephants?

While it is entertaining to watch elephants paint, play soccer, or ride them, it comes at a considerable cost. Rather than reinforcing positive behavior, most elephant training involves bullhorns and other mistreatment. For example, some elephants become blind from having many spotlights shine in their eyes. Others get stabbed in the eyes and ears as punishment because that’s the most vulnerable part of the body. Elephant riding is the worst! An elephant’s back is not made to withstand all that weight on their back! Elephant riding often leaves elephants with permanent injuries to their bodies.

But it’s true. That’s why finding a place that allowed me to interact with elephants in Thailand without the suffering was a priority. I wanted to spend money on programs that enhance the animals’ lives, not make it worse.

Enter Elephant Nature Park, a natural home, and sanctuary for elephants. Yup, this park is pretty much a retirement home for elephants, where they can spend their remaining years feeling happy and loved. 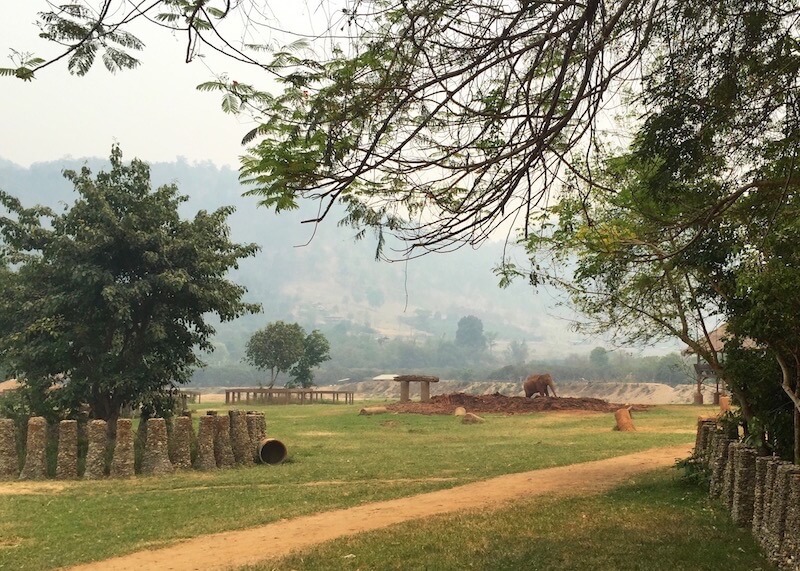 Elephant Nature Park. Do you see the elephant in the distance?

One day Itinerary at Elephant Nature Park in Chiang Mai (2,500 Baht per adult)

While volunteers can stay for a longer duration at the park, I opted for the one-day visit. You can make a reservation to visit the park here.

The itinerary for the day tour looks like this:

Here’s a short video montage of my one-day visit at Elephant Nature Park:

Related: 7 Amazing Bangkok Desserts To Try During Your Thailand Travels 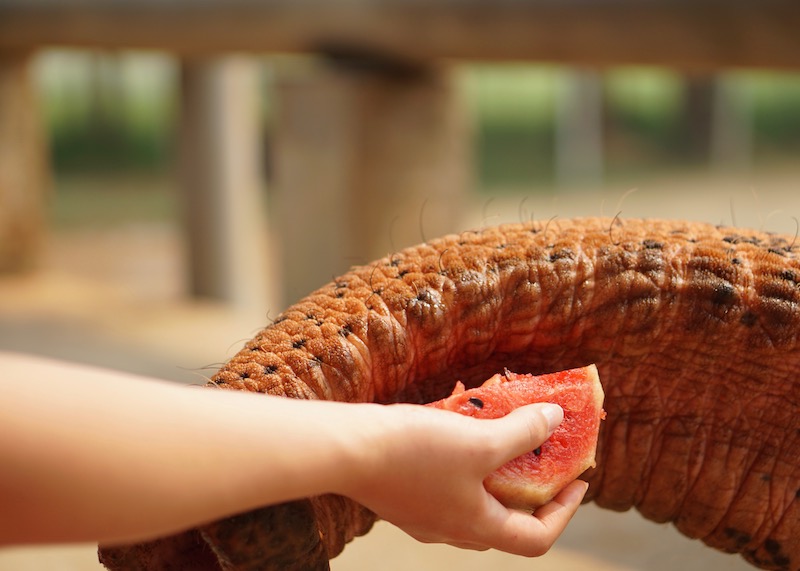 Time to feed the elephants!

At this point, it had only been ten minutes since we arrived at the park…but I’m already swooning inside. 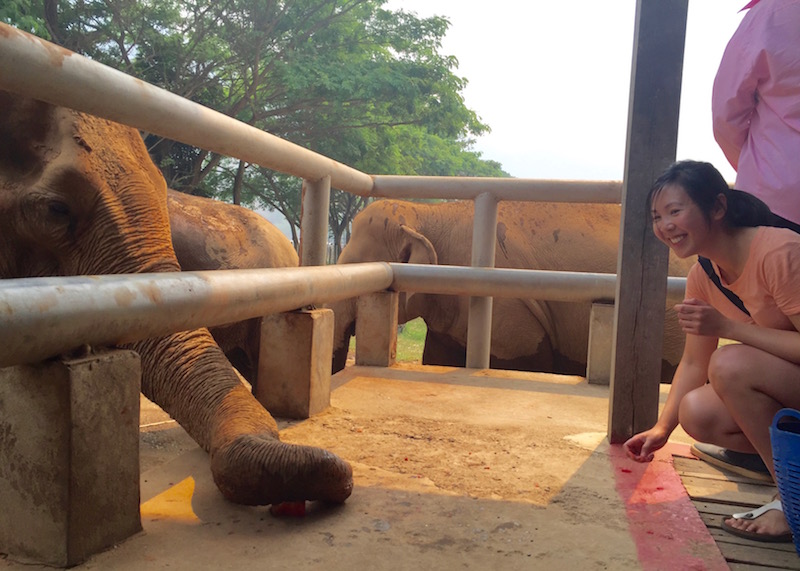 I’m so happy feeding the elephants

We then left the feeding platform to make our way to meet another friendly elephant. 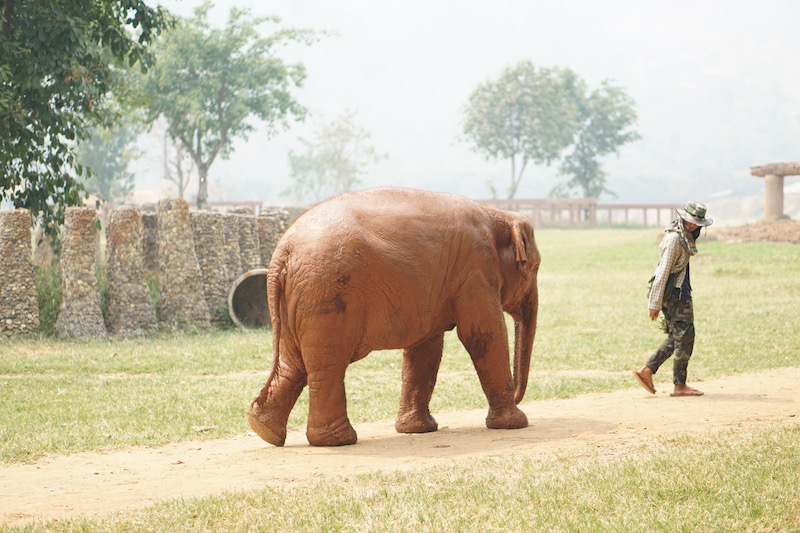 Watch out for crossing elephants 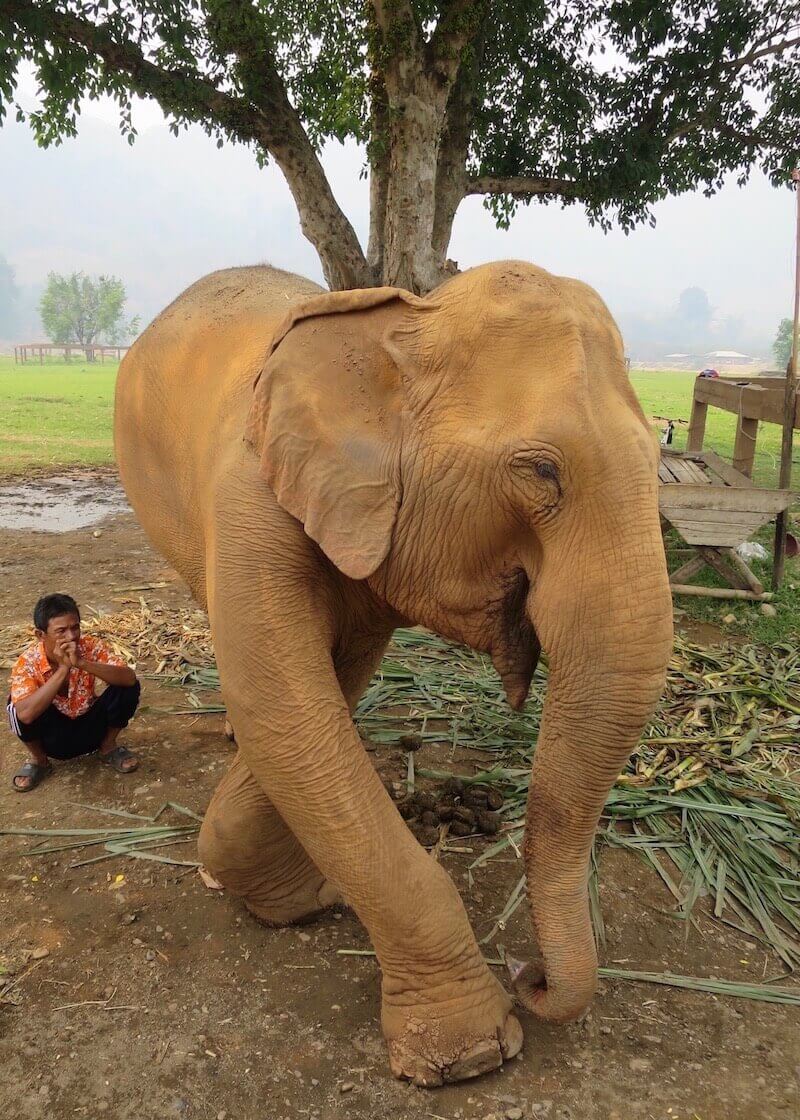 Scars from her past life. Notice how her front left leg is twisted?

We then made our way to meet another elephant. Her name is Ta Bou (spelling?), and she has a physical injury on her front left foot from a previous abuse.

At first, I was a bit scared of the size of the elephant, and because our guide gave us these warnings:

After a few minutes of interacting with this elephant, I felt a bit more at ease. These giant creatures move at a slow pace, and the key is to move slowly and not be in their blind spot.

Indeed, elephants are gentle giants. Sometimes, you won’t be aware that one is coming from behind until you suddenly feel their significant presence. 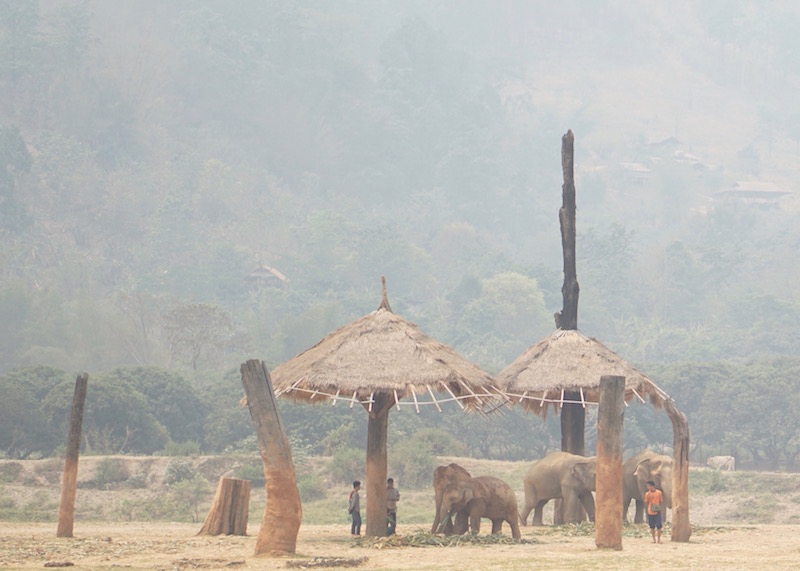 Walking towards the elephants at a distance. It was a far walk in the hot Chiang Mai sun!

We then walked over to another area where we had the chance to meet one of my favorite elephants, Jokia.

Jokia’s story before she came to Elephant Nature Park 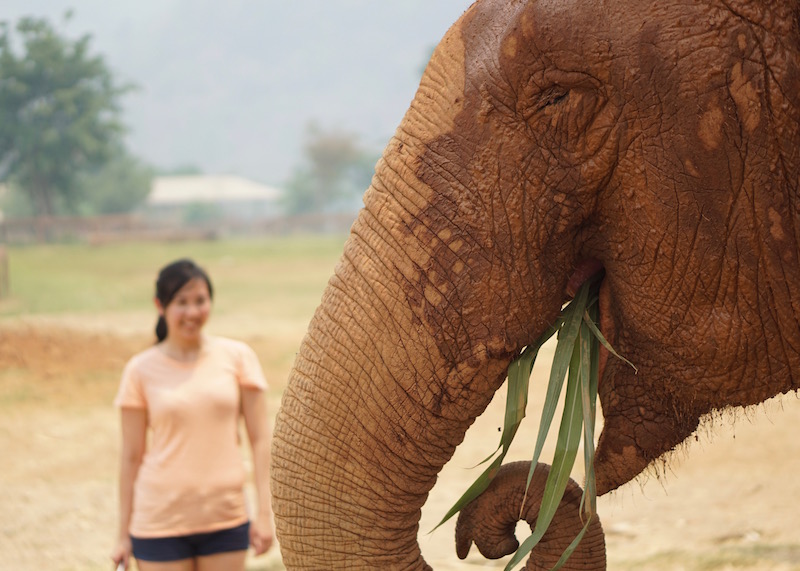 Jokia’s sense of smell is impeccable

Jokia was born in 1961 and grew up with a compassionate Karen family where she supported the family by working in the logging industry.

When the Thai government announced a logging ban in the 1980s, Jokia became unemployed and could not support her family. Unable to bear the expense of caring for such a large animal, the family had to sell her to a mahout (elephant trainer). This is where the mistreatment begins.

Under her mahout’s control, Jokia worked in illegal logging jobs while pregnant. One day, Jokia was pulling a log uphill on a steep mountain when she went into labor and gave birth to the calf. The calf was born inside the amniotic sac and rolled downhill on the mountain. Despite the situation, the mahout forced her to keep working and did not allow her to stop and care for her calf. Sadly, the calf was unable to free itself from the sac and passed away.

Losing her baby left Jokia traumatized and she refused to work or obey her mahout. As a result, the mahout stabbed her in the eye, and eventually the other eye, leaving her blind in both eyes.

A life of suffering was not in Jokia’s destiny; eventually, Elephant Nature Park was able to rescue her. Jokia then met Mae Perm, her best friend for almost two decades before Mae Perm passed away. 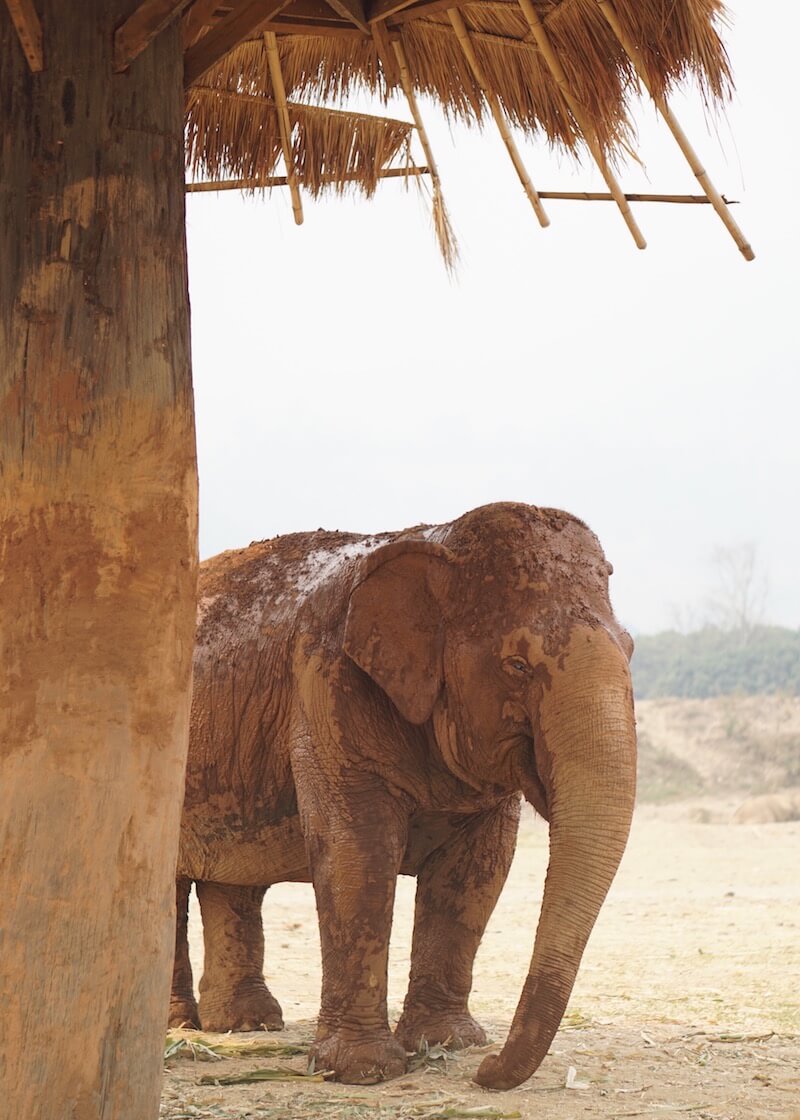 The relationship between these two is admirable, and both enjoyed each other’s company. Mae Perm took the caregiver role when she realized Jokia is blind and would guide her around the park. 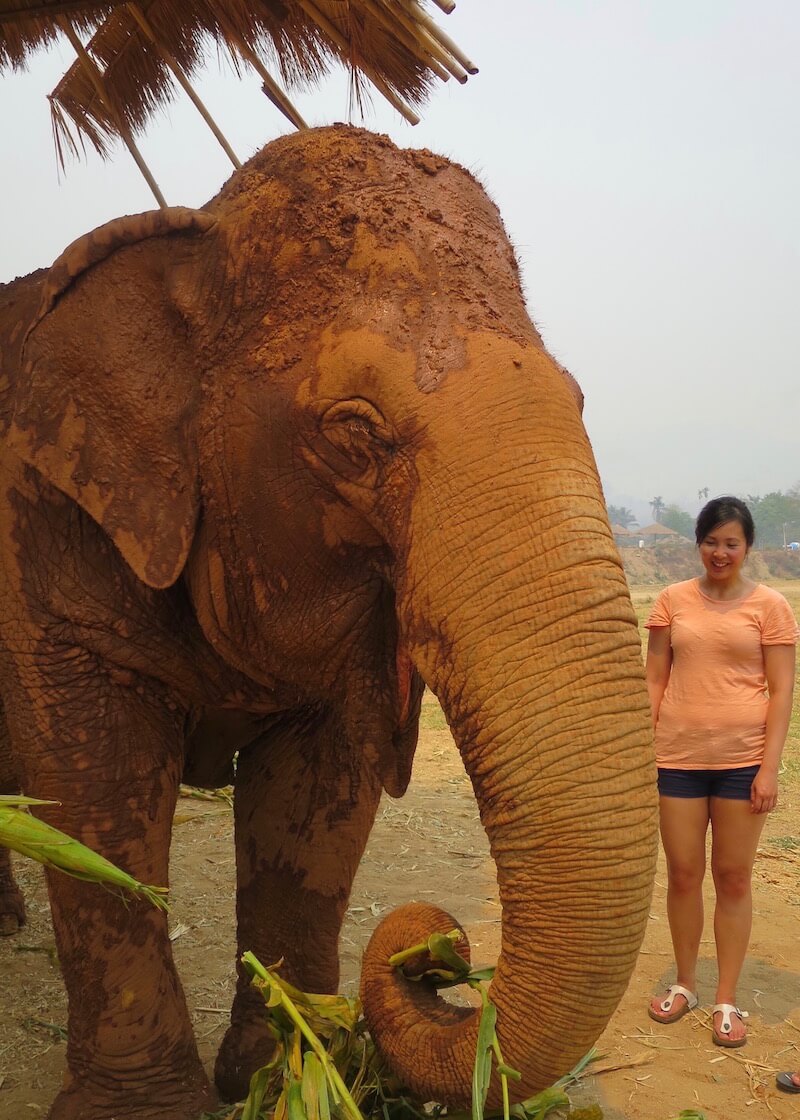 I think Jokia is smiling in this photo

Related: Chiang Mai Desserts To Try During Your Thailand Travels

Navann is one of the few baby elephants at Elephant Nature Park who does not have a traumatic history. As a result of that, he is curious about everything around him and does not let fear hold him back. Navaan’s inquisitiveness gets the best of him (just like children!), and he doesn’t always obey his mahout. Our guide warned us to get out of the way if baby elephants come towards us (which happened during our visit!) 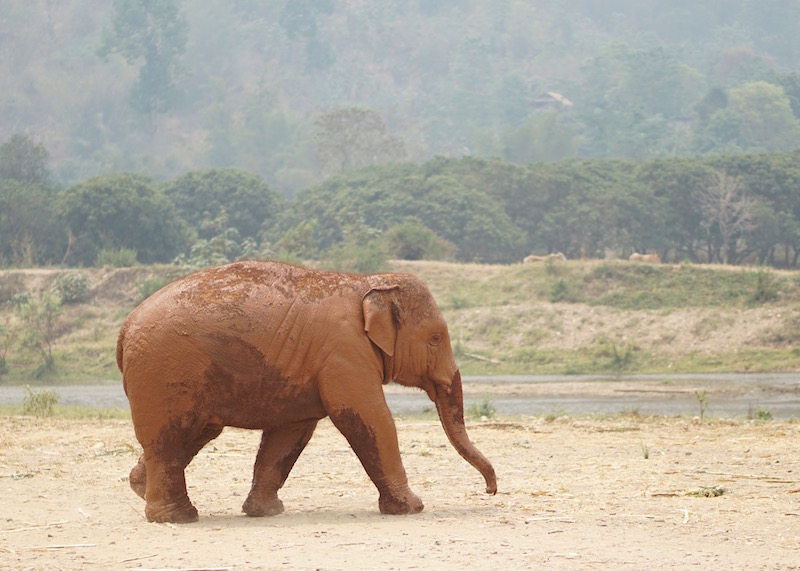 It’s cute to watch Navann; he reminds us that all babies have a playful spirit. Here is an adorable video of this troublemaker that will leave your heart melting inside.

Spoiler alert: You don’t need your bathing suits for this activity. Bathing the elephants means standing in a knee deep river and splashing water on them. To which they’ll end up rolling in piles of mud immediately after. 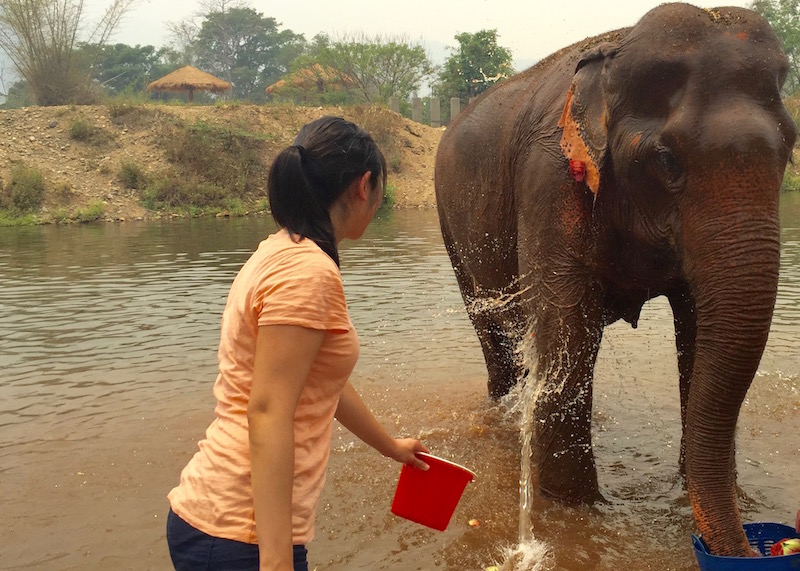 Splashing buckets of water on Jan Peng in knee-deep water

Here I am, “bathing” Jan Peng. Like all elephants at the park, Jan Peng had a sad story before she arrived at Elephant Nature Park. Jan Pen’s former life was in the logging industry, where she survived many falls on the steep hills. Her old mahout abused her, and she has stiff joints and a tail bitten off to show for it. She also has a hole in her ear from hook injuries. See the flower in her right ear? Her new mahout has since hidden that scar with flowers, and she is now the most stylish elephant at the park. 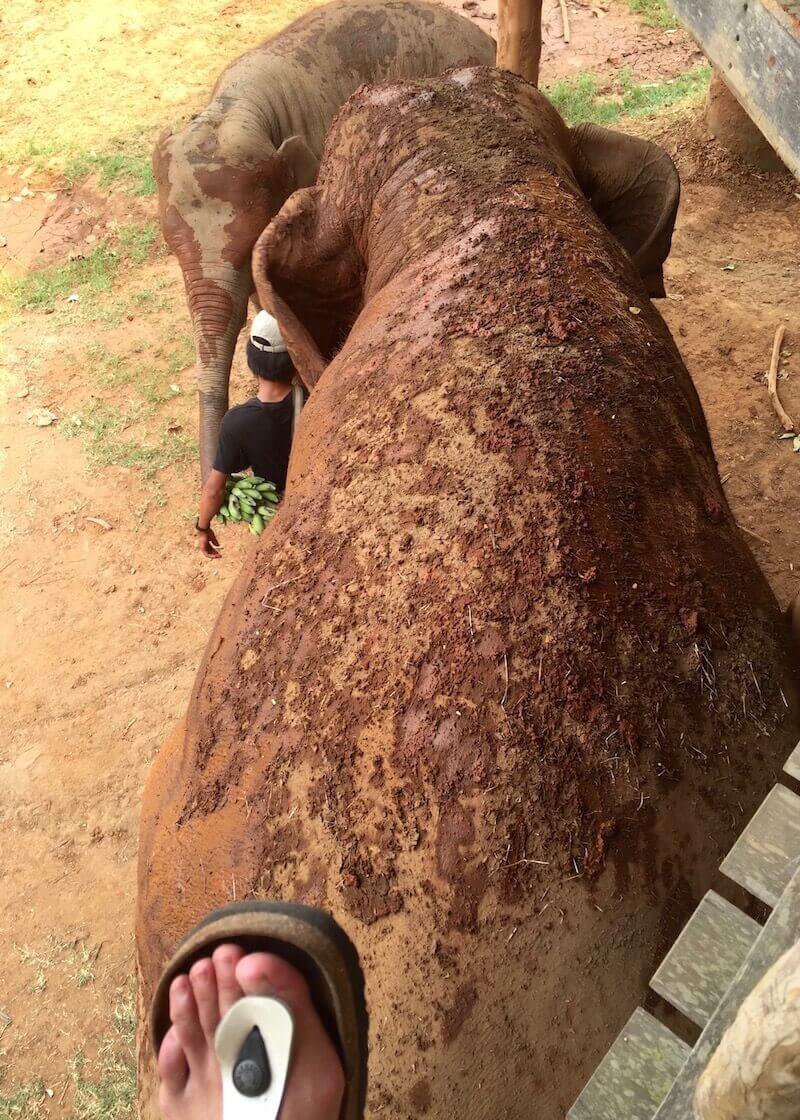 Hey, look! There’s an elephant under my foot!

There’s lots of downtimes to sit and watch the elephants. The afternoon is spent watching elephants and trading stories with other visitors. The downtime to sit and observe the elephant is nice because you start to see the elephants’ unique personalities. 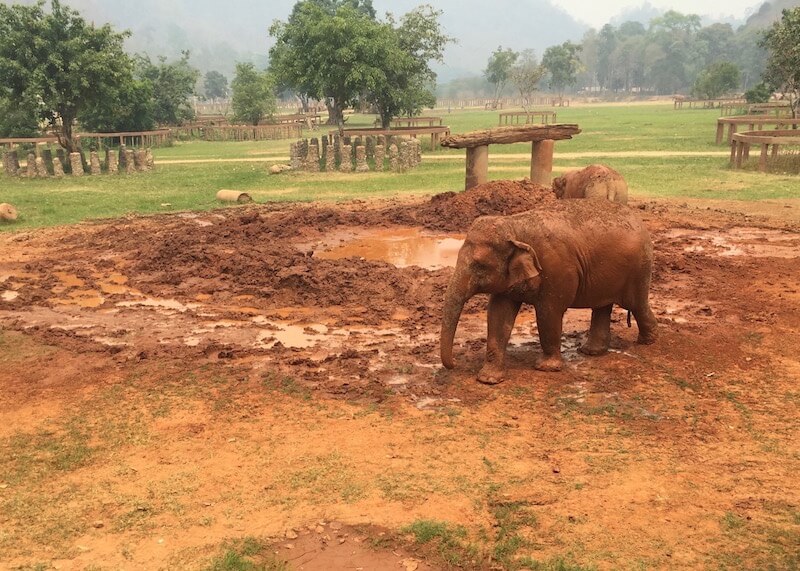 Mud bath! Minutes after we bathed her

Every so often, I’d see a stubborn elephant disobeying its mahout for a longer playtime. The mahout will beg the elephant to come and offer food as bribes to get the elephant to follow him. It’s a funny sight and a reminder that there’s only so much a mahout can do to persuade an elephant to obey. Like all creatures, they don’t always like to be told what to do. 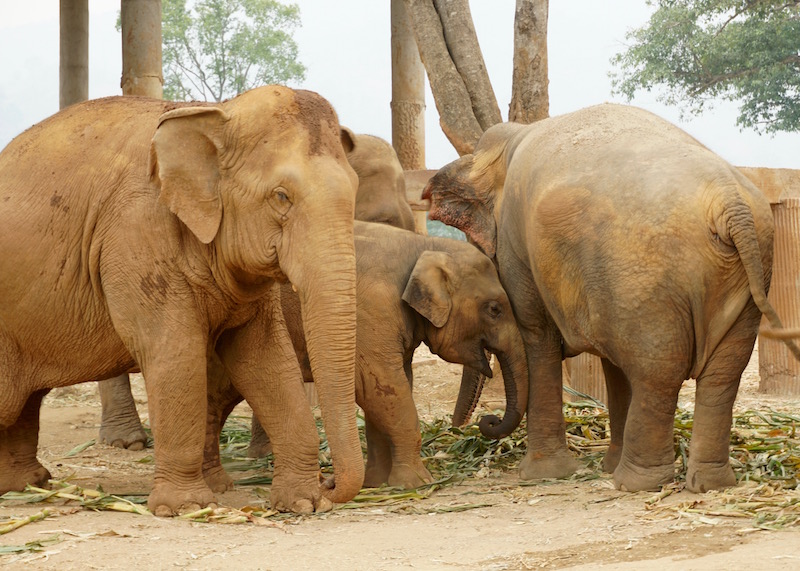 It takes a herd of elephants to raise a baby

Elephants are extremely social and have a strong sense of family and community. Female members will stay together and spend the rest of their lives with each other. As well, they often help each other raise their offspring. One baby elephant will have many other female elephants acting as a mother figure to them.

When you realize how social elephants are, you’ll see how cruel it is to isolate them. As a result, it is common to hear isolated elephants suffering from depression. 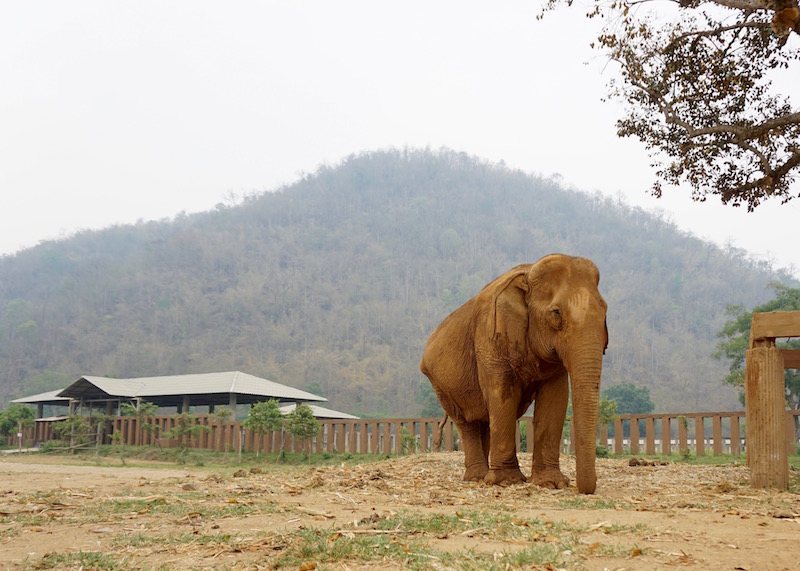 A shy elephant, watching the calf from afar. Elephants can be introverts too, you know!

I forget this elephant’s name, but she is the reserved one that prefers to be alone. While shy, she loves taking care of other elephants’ babies and is watching a baby from afar. At one point, the calf left his group to check up on the shy elephant, and we had to scramble to get out of his way.

What to bring for your visit to Elephant Nature Park 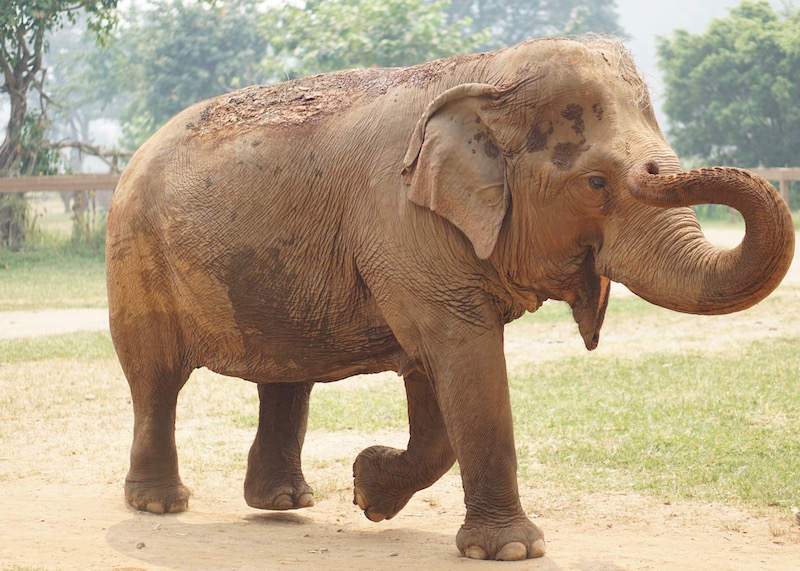 Elephants deserve to be happy!

Even though Elephant Nature Park was the most expensive activity when I visited Chiang Mai, it was worth every baht. The chance to interact with elephants in an ethical manner was so rewarding and magical. Of course, the people I met at this park were also amazing. Like me, these people did a ton of research to find a place that is socially responsible. They also had interesting life stories that they shared with the group. I suppose you can say I got a two-for-one special in that I got to hear personal stories of the elephants and interesting humans. And you know me, I live for stories. 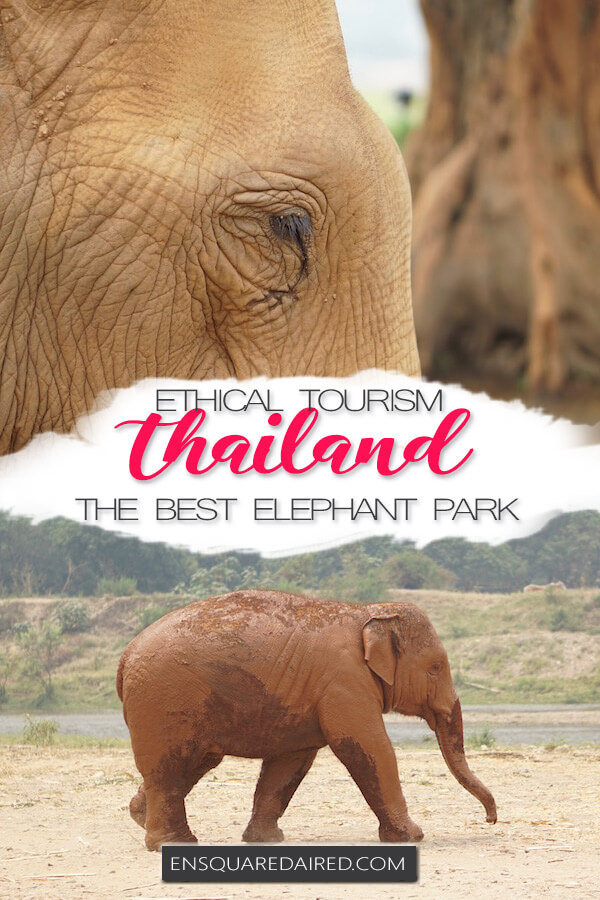