You are here: Home / Travel / Hanoi Trip Blog | Being Scammed For The First Time In Hanoi 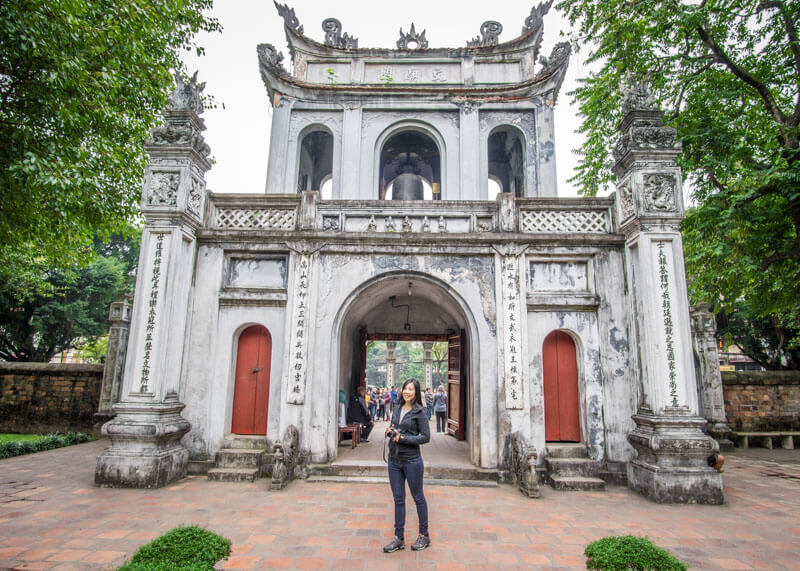 After spending an incredible time in Ninh Binh, it was time to come back to Hanoi for a week before heading back to Chiang Mai.

We had a lot of time to spend in Hanoi since we decided to scrap our original plans for visiting Sapa to see the rice fields. The timing wasn’t quite right to see the lush green fields as everything would have been brown. Plus, we already got our fair share of experience rice fields in Bali earlier in the year. Not a significant loss for us. We also ditched our plans of visiting Halong Bay, so we had loads of time in Hanoi to eat and check out museums. 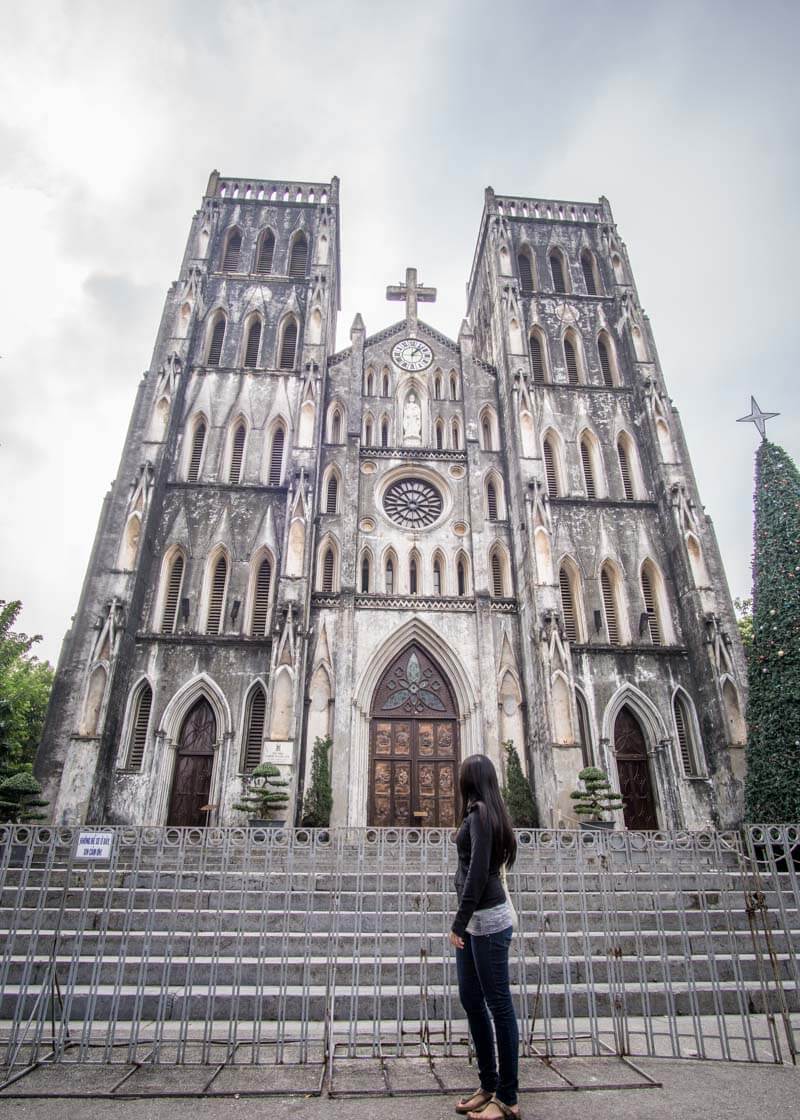 It is hard to get by with English in Vietnam, so I broke my rule and started talking to the locals in Vietnamese during our trip to Hanoi. While I speak fluent Vietnamese, I don’t speak in the mother tongue while in Vietnam to avoid getting scammed. But at some point in our travels, I started to open up more and talk in Vietnamese. Of course, I tried to be careful because talking to the wrong person could result in them trying to extort money from me.

Because I’ve done quite a bit of travelling and saw people get scammed left, right and center during past visits, I was prepared. Travelling to the motherland means lowering expectations and accepting that scams will happen. Of course, there are ways to be cautious. You know, eat in local places with listed prices. For me, it meant not speaking in Vietnamese. I have a Southern accent, and because I am a Viet Kieu, it feels worse when I get scammed.

But after a few days of having a great time in Hanoi and realizing how I was over paranoid, I had my guard down. 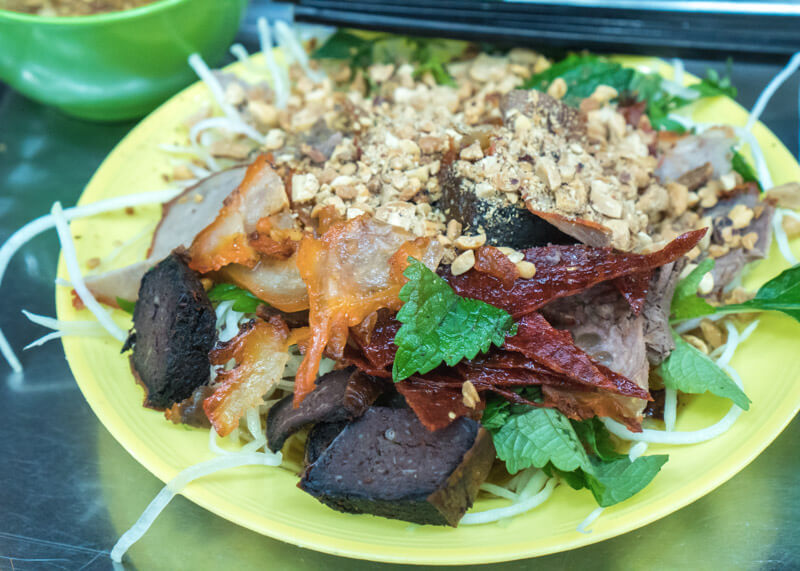 We tried a beef salad and dumplings based on the recommendations of many blog posts and vlogs. Apparently, this restaurant is the place to visit when in Hanoi (Spoiler alert: It’s not). Prices weren’t listed, so I ask a worker in Vietnamese (mistake #1!) the price. I don’t remember what he said but felt at the time that the prices were reasonable. So after talking to him, we decided to sit down and eat.

When I sat down and ordered, I confirmed the price again in Vietnamese, which the guy said was 85,000 dong ($4.75 CAD/ $3.60 USD). I noticed that when he said that, all the Vietnamese people around me stopped and stared at me. And then they stared at the guy. I wasn’t sure what was going on, but my gut told me I was paying more than the rest of the customers.

I later went home and found the prices of the meal on a Vietnamese website. The two dishes should have been 40,000 Dong. Wow. They blatantly ripped me off, in front of other customers.

I couldn’t help but feel crappy after that experience

In the end, I paid $2.50 CAD ($1.90 USD) extra compared to what locals paid, but I couldn’t shake the bad feeling I had in my heart. I am in the motherland, and yet instead of feeling welcomed, I get ripped off. They did it in front of other locals (who all said nothing by the way).

I eventually moved past that feeling and kept my guard up by not revealing that I am half Vietnamese. G looks more Vietnamese than me, so I had to make him “speak Vietnamese” so that they know he is not Vietnamese. 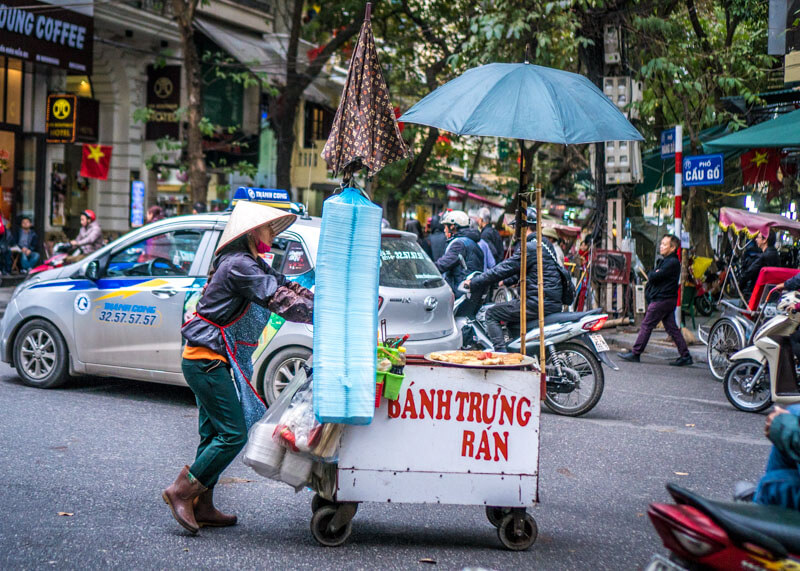 Being born overseas is like being the sibling that wins the lottery while the other sibling is struggling to make ends meet. One cannot help but feel bitter about why one has to suffer while the other is living a comfortable life

But not everyone is out there trying to scam you 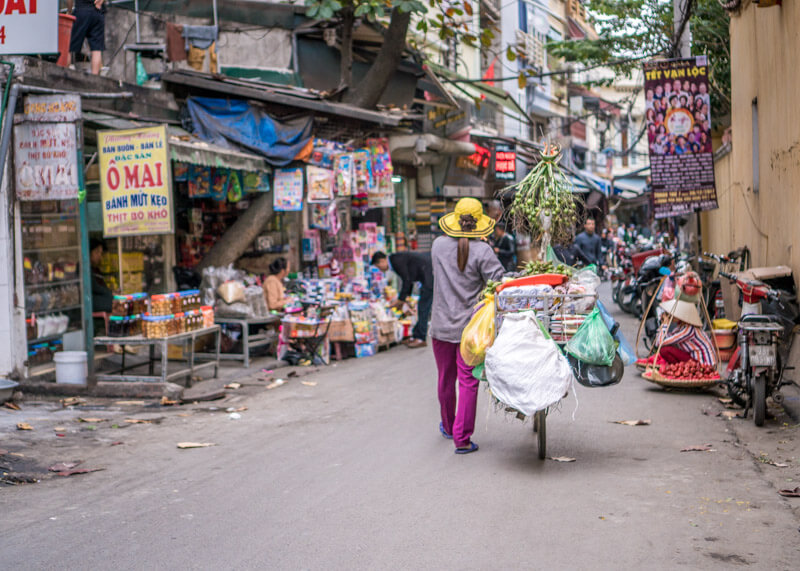 A woman is moving her inventory on a bike. Vietnamese women work very hard in Vietnam to provide for their family and yet… it’s often not enough

For example, I was searching high and low to buy a sleeping liner. I find that Vietnam has the best sleeping liners that are thin, cheap, and light enough for travel. So of course, when I was in Hanoi, I made sure to scout out vendors and prices for a sleeping liner.

After asking a few vendors for prices, it seemed like the going rate for a double size sleeping liner is 150,000 dong ($8.50 CAD/ $6.50 USD). So I went to a lady and bought it from her, no negotiations and gave her the exact amount. I’m sure I could have saved 50% or more on the price if I haggled, but really…what’s a few dollars of savings to me when I know that this money can help the woman and her family?

So anyway, I bought the liner from her, and when she offered to give me a plastic bag, I politely declined. The fact that I didn’t haggle AND refused a plastic bag touched her. As I walked away, she said called out “lady,” opened her wallet and tried to offer me 20,000 dong. She must have felt bad for overcharging me, so she wanted to give me back change even though we agreed to 150,000. I smiled and refused her offer. I appreciate the gesture, but I know she needs the money more than me. Her actions were a reminder that she’s just trying to make some extra money to survive.

A visit to the train street in Hanoi 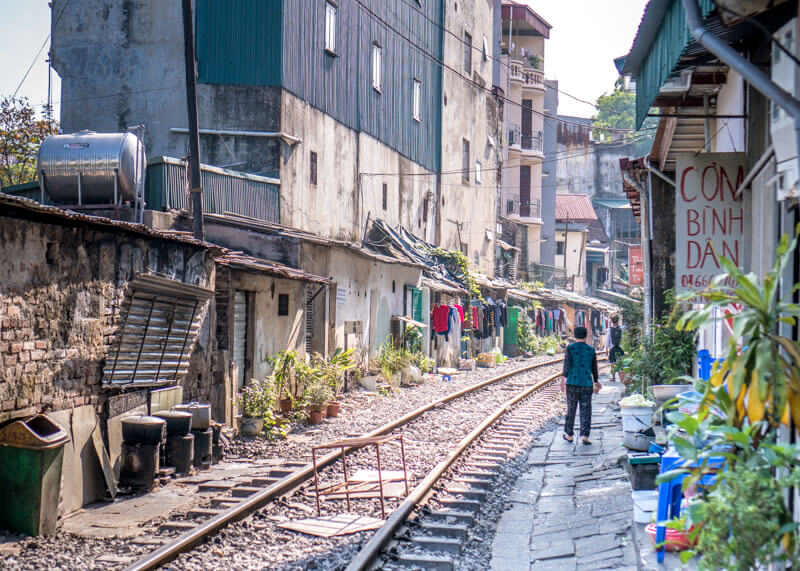 A resident is walking along a narrow path on Hanoi’s train street. I hesitated to take photos here at first because I questioned the ethics of promoting such a place, and if it is something the locals would want. It wasn’t until I discovered cafes, shops, and social enterprises along the train tracks that I realized the locals WANT travellers to visit the area

We thought we’d spend only 30 minutes there but instead ended up spending a few hours there. At first, I was trying to process what is happening to the area – after all, we were at a place that people call home. I didn’t want to intrude and was trying to be respectful. But then I wandered to another side of the train street, and we ended up spending most of our afternoon there. We didn’t realize that there were coffee shops and stores along the railroads. 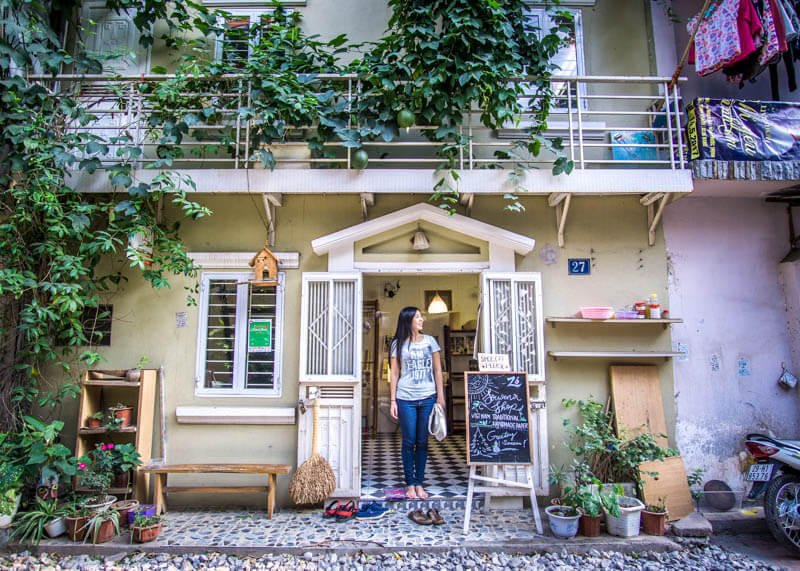 Standing in front of Zo, a social enterprise in Vietnam

We ended up spending quite some time at Zo, a social enterprise that’s on a mission to preserve the art of making paper in Vietnam. They also employ villagers through their work. I had such an incredible time and enjoyed my experience there. If you are a stationery fanatic, you need to stop by this shop – especially if you have an appreciation for how to make paper from scratch. 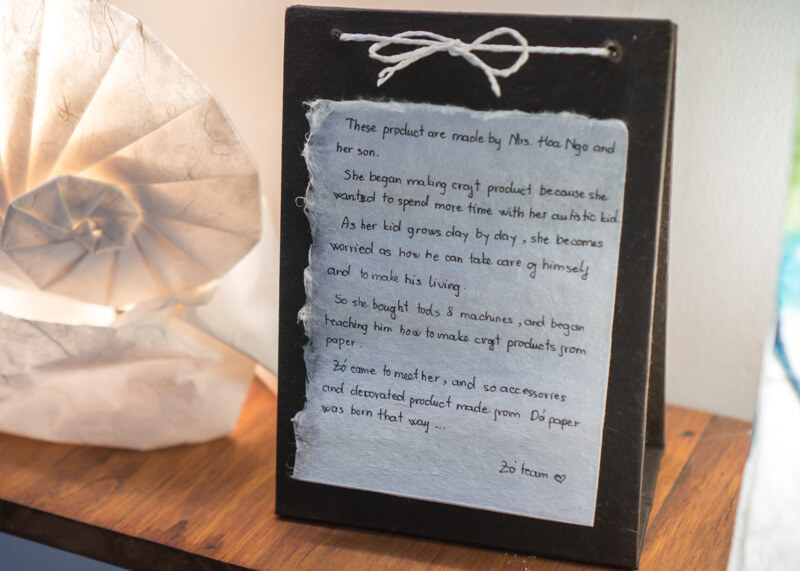 The story of Zo 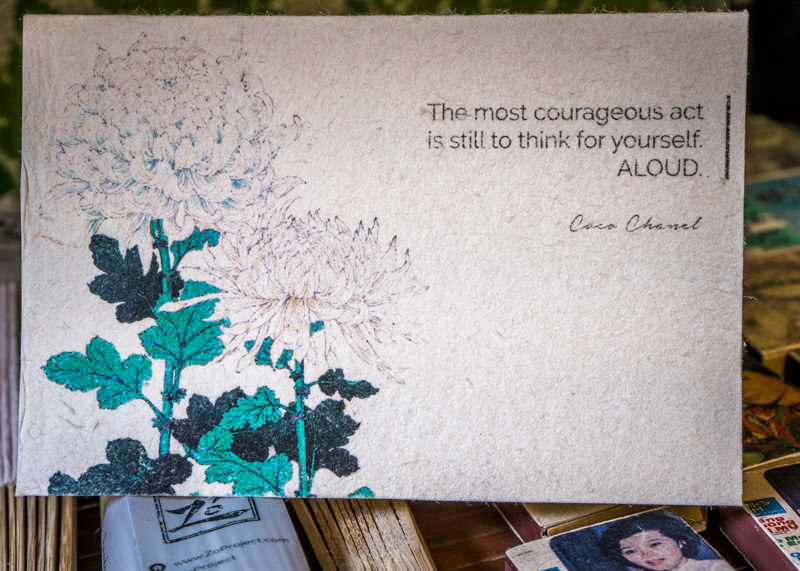 We also had coffee at the railway coffee house where we met a lovely couple from Koh Samui. The lady was from Scotland before she decided to move to Thailand for seven years. It’s cool to meet people like that while on the road.

Spent a lot of time in Museums

I think the best part about Hanoi is the countless museums that you can visit. There’s the Vietnamese Women’s museum, fine arts museum, Vietnamese military museum, and the Vietnam national museum of history and of course the Hoa Lo museum. I will be writing a guide about the museums in Vietnam, but highly recommend you visit most of these places while in the capital.

A heavy moment at the Hoa Lo Museum

So many thoughts ran through my head as I walked through this museum. What life was like when the French colonized Vietnam and thinking of how recent these tragedies were for Vietnam. It was all very emotional as I tried to process what was going on and what it was like for the Vietnamese to live during that period.

Let’s say it was quite an experience…

You can see Ho Chi Minh’s embalmed body every morning before 9:45 am. The lineup was crazy long – perhaps over 1km long.

You first had to go through a security checkpoint that was comparable to the ones at the airport. If you had electronics, they needed to be dropped off in another section, which they give you a bag to place your electronics. It was an experience, and I was surprised at the volume of people given the fact that it was a weekday.

Most of our days were spent eating…

We ate a lot. Click to read my detailed guide on the best food to eat in Hanoi! 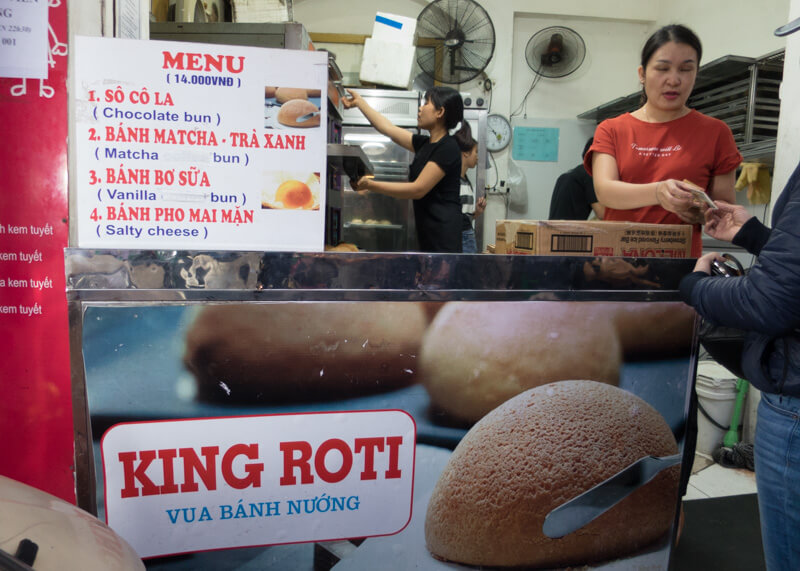 Me eating my favourite bun in the whole wide world! I can’t believe I stayed on the same street as King Roti and never knew of this place’s existence the first time I visited Hanoi! There are three flavours to choose from – I recommend trying the vanilla bun, salty cheese, chocolate bun, and matcha bun in that particular order 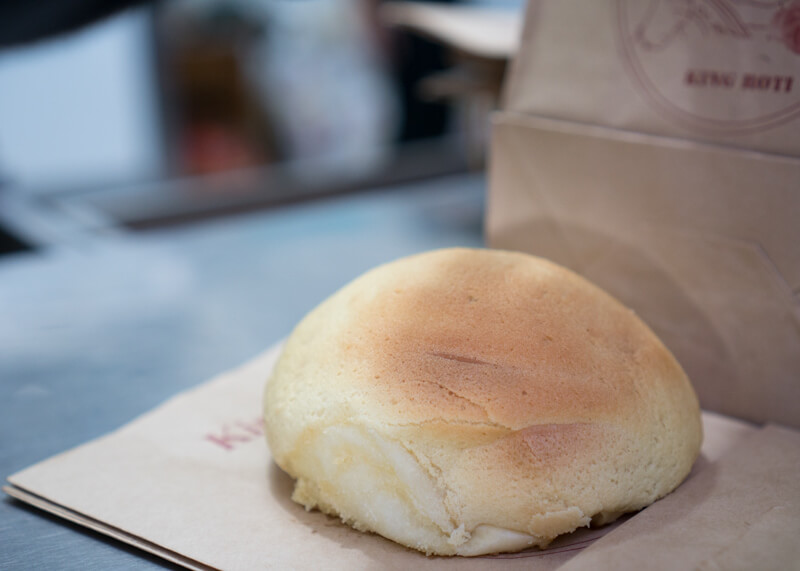 Can you believe this Mexican bun is only 14,000 VND for one? 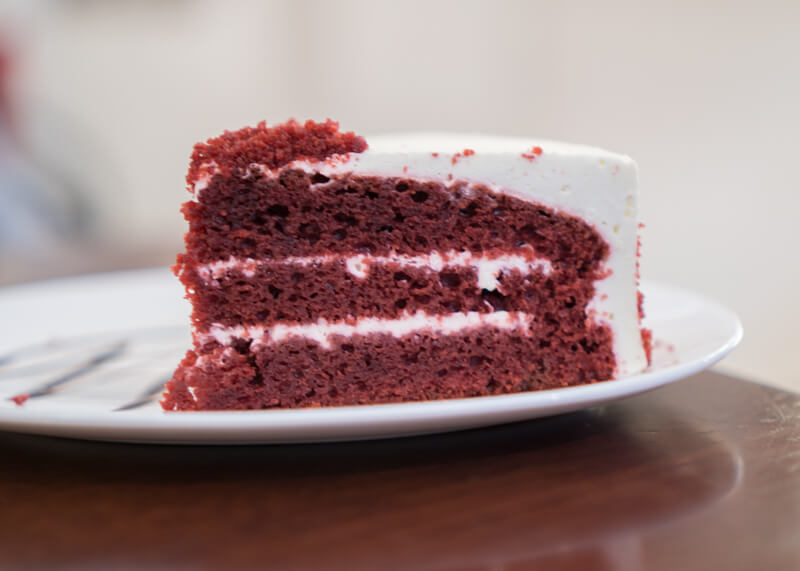 Walked into this fancy shop only to discover that they had a two for one special with cakes! I ate both of them by the way | Mars cake (red velvet) (55,000 VND) 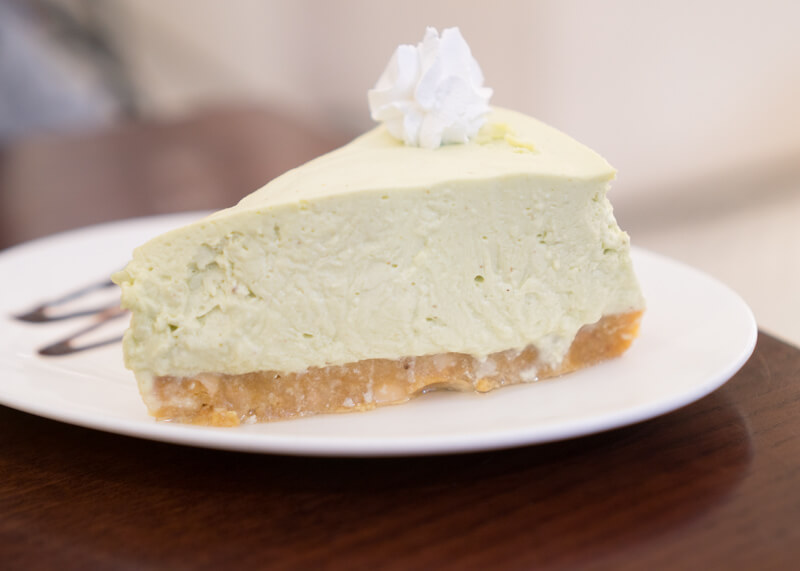 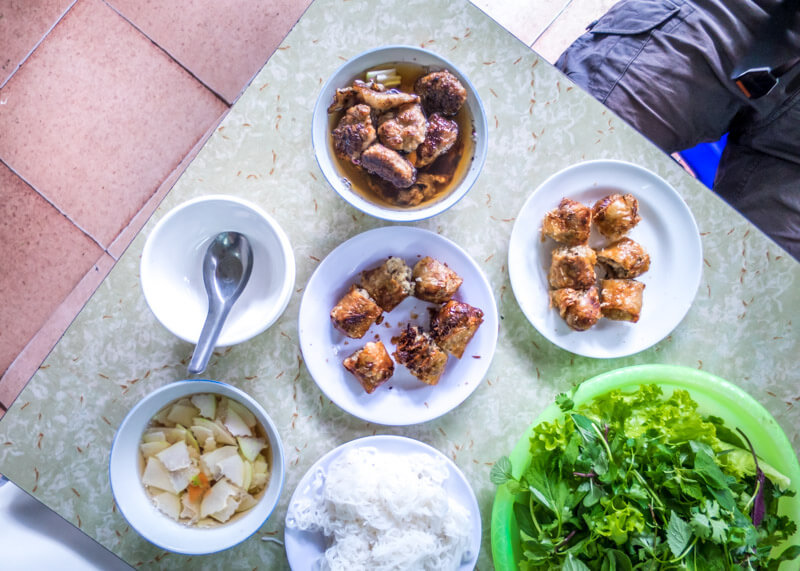 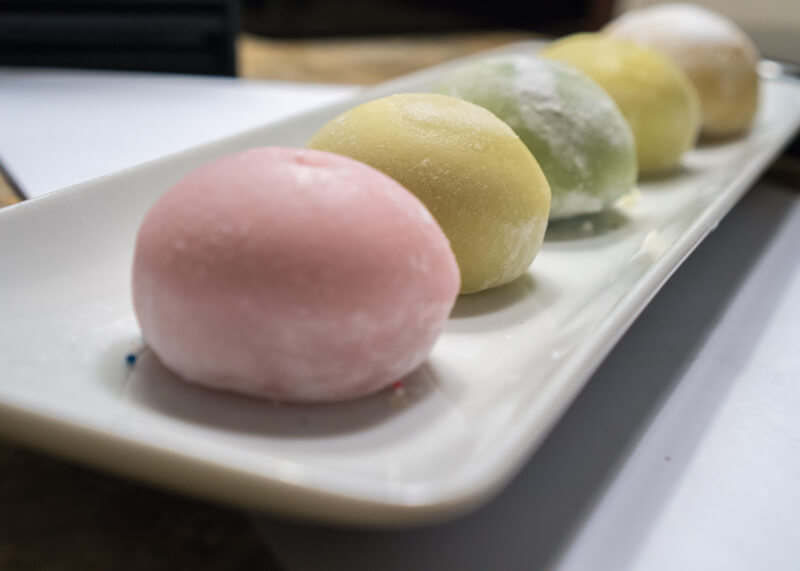 Mochi sweets, a dessert place I discovered while in Bangkok. Sadly, the Bangkok location closed and I can’t find this shop in Bangkok. But fortunately, there were a ton of places in Hanoi 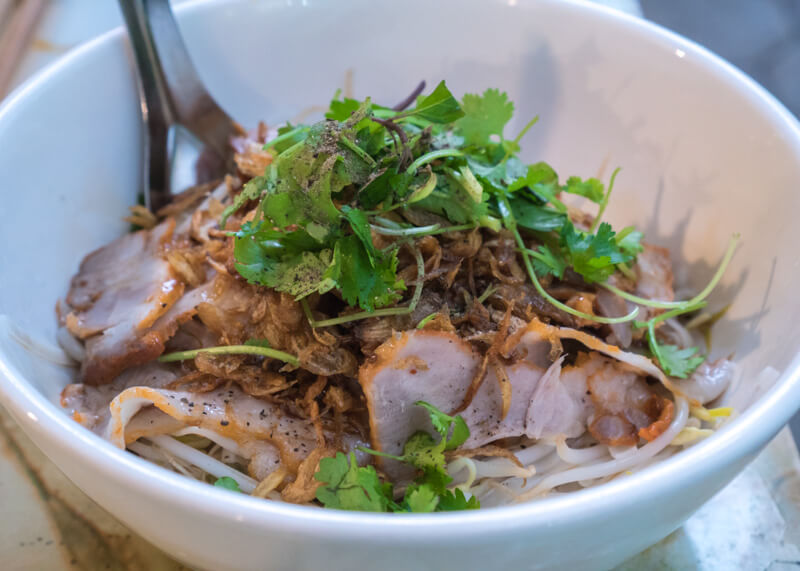 One of my favourite dishes in Hanoi 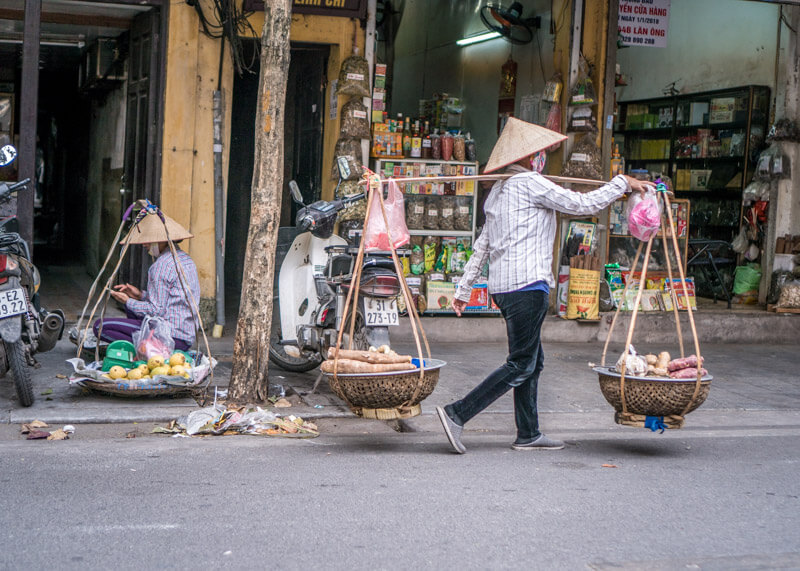 Although we stayed in Hanoi way longer than what most people do, it still amazes me how there’s so much to see in the city. I could sit all day in the corner of a street, and just people watch. 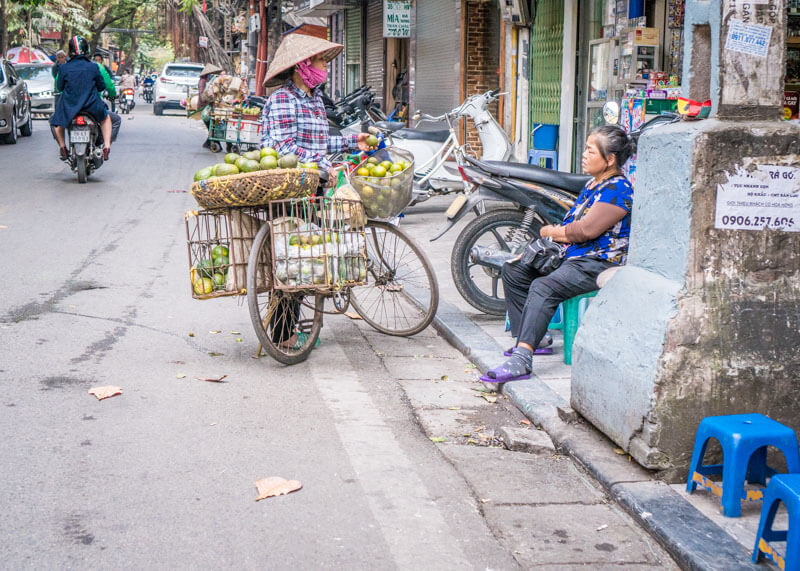 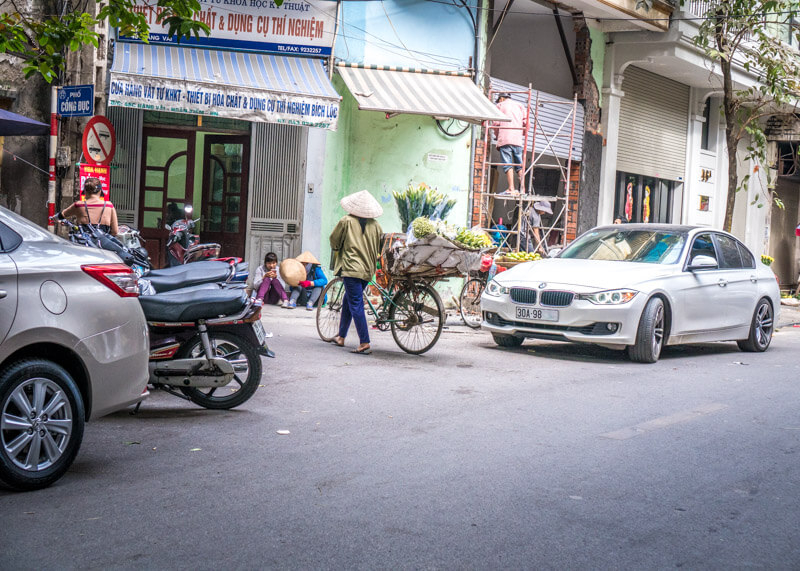 A picture says a thousand words… 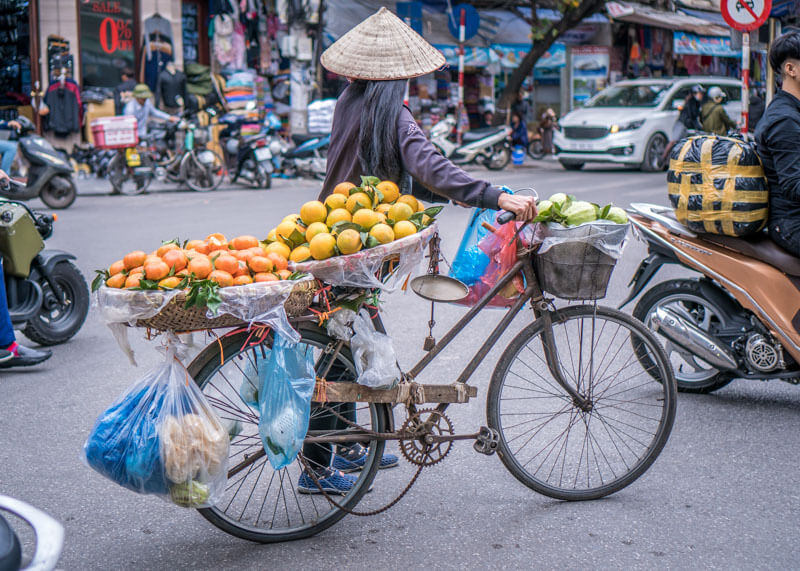 A vendor crossing the street. You’ll see a lot of them carrying their goods on bikes 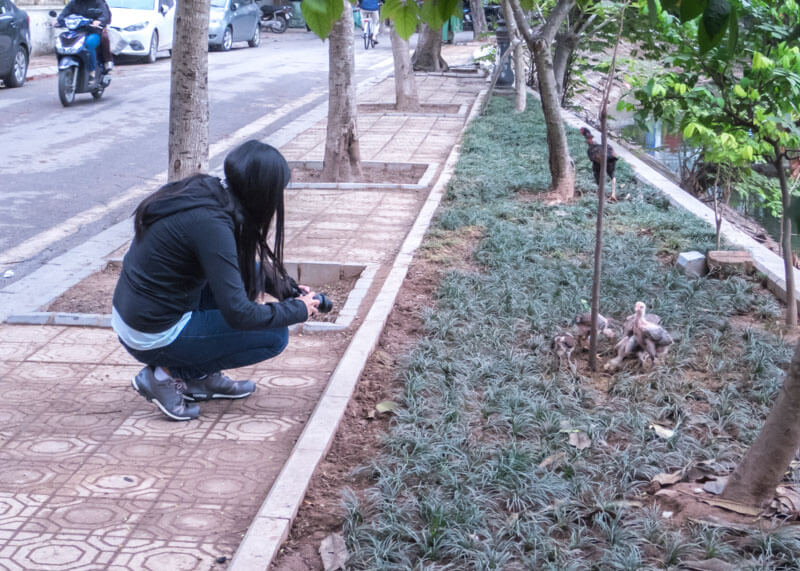 But of course, I chased after all the chickens I came across to take photos of them. I have an affinity for chickens and ducks in Vietnam, after spending a summer raising 20+ babies 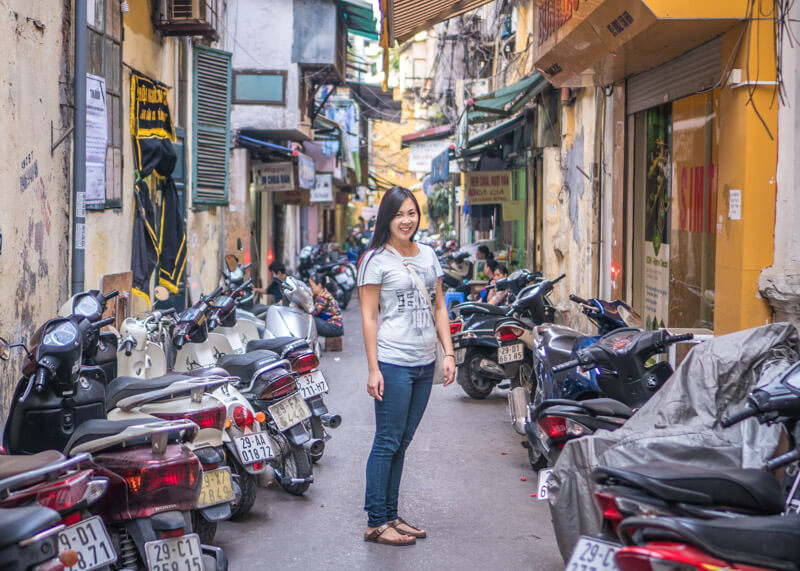 Discovering the streets (and motorbikes of Hanoi)

If it were up to me, I would have scrapped out Vietnam during our year of travel. I had an okay time during my last visit and didn’t feel the need to go again. But G really really really wanted to go, which is why we put Vietnam into our itinerary. So we did. And I had a lot of fun, likely because I avoided a lot of touristy places.

Of course, before we know it, our time in Vietnam was over, and it was time to head back to experience life in Chiang Mai!

Read Next: A Glimpse Of The Expat Life In Chiang Mai 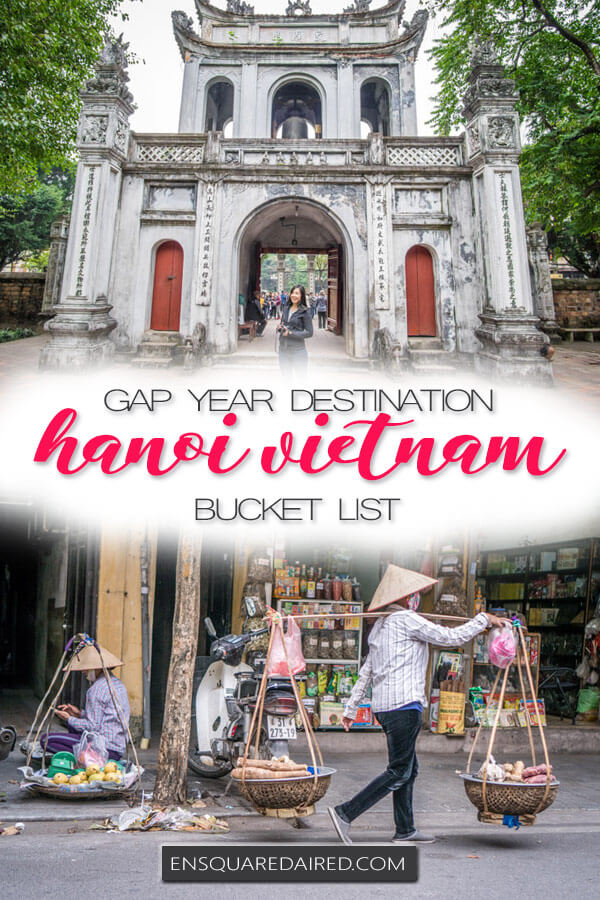 Previous Post: « What You Can Expect At The Chiang Mai Train Station
Next Post: A Glimpse Of The Expat Life In Chiang Mai »