You are here: Home / Destinations / Why My Moon Hotel Hanoi Offers Great Value 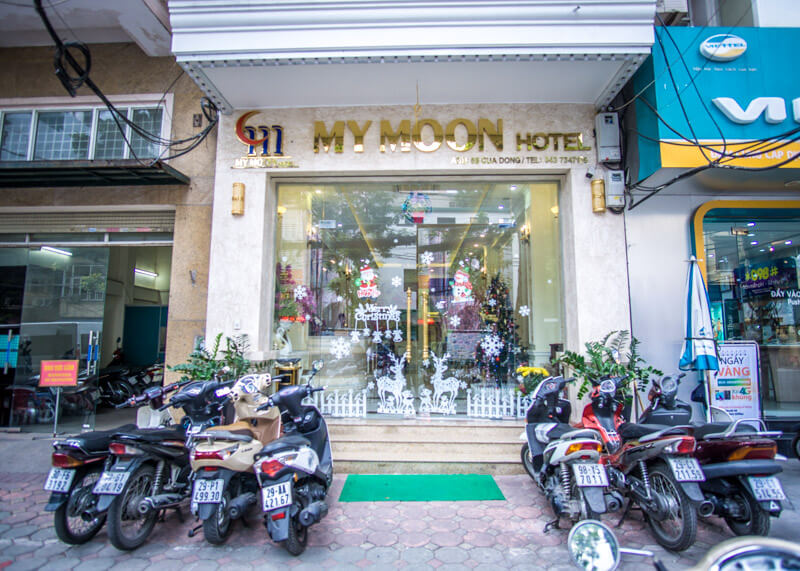 Hanoi became our base in the north of Vietnam during our year of travel. We planned to spend a month in Vietnam, but after making a gazillion changes to our itinerary, we settled for two weeks in the country.

As I’ve been to Vietnam twice before this trip, I was familiar with what to expect when it comes to Vietnam travel. I stayed in shady hotels during my last trip and wanted to pick one that I can trust to not try to scam me. The way, I could walk to the Old Quarter and to all the sites, attractions and the best places to eat in Hanoi.  My Moon Hotel seemed to fit the bill and the budget.

Why I decided to visit Hanoi 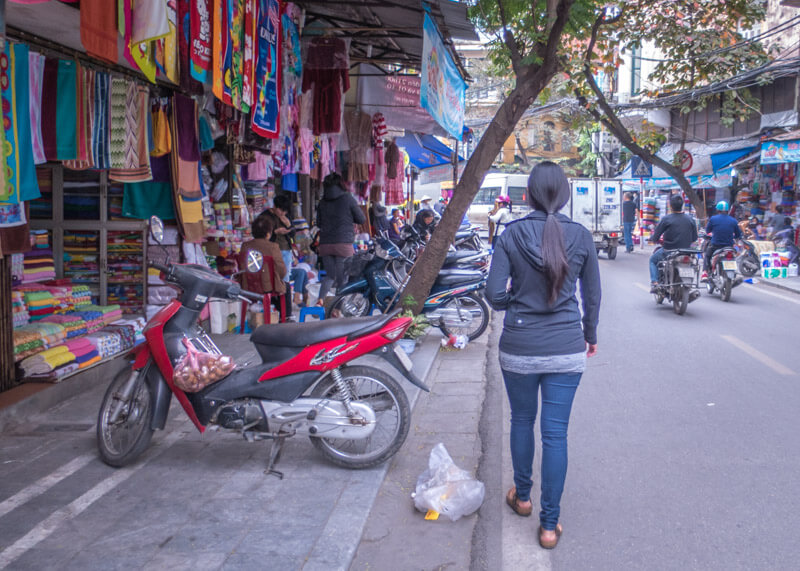 Walking along the streets of Hanoi

I made a very very short trip  in Hanoi years ago during my first solo trip to Asia. I didn’t think much of Hanoi during those two days and wasn’t keen on revisiting this northern city. But G♥ was dying to visit Vietnam, so we decided to make Hanoi our base. We couldn’t decide on visiting Sapa and Halong Bay but figured we’d make our decision when we get to Hanoi.

What’s the ambiance of My Moon Hotel Hanoi like?

We arrived at My Moon Hotel late at night to a bright and pretty reception. It was very feminine and picturesque and reminded me of our Sukhothai hotel. I was impressed at how well it was decorated considering how we were paying less than $50 CAD ($38 USD) per night. The hotel is new as well – around three to four years old.

The hotel room at My Moon Hotel Hanoi 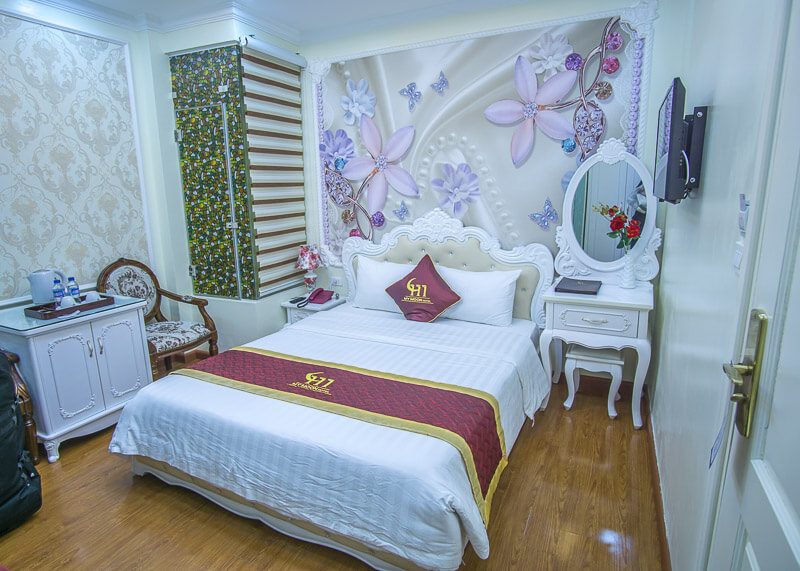 Our accommodation for the next few days

The room was very well decorated and well laid out. The lights had a lotus style shade, and the place is very girly.

I loved it, but G♥ thought it was too girly for him. Too bad haha. The only downside to our room was that there is no window overlooking the street.

Instead, there was this long narrow shaft in the middle of the room with a latched door. I opened it and while I’m not sure where it leads to, I figured this could be our escape route if something happened.

The bathroom is also part of the room and has a glass door that acts as a separation. This setup did not bother us at all as we stayed in a similar style hotel in Mandalay. The only inconvenience was that if one of us had to pee at night, the whole room would light up from the bathroom lights. The upside is that there is a bidet for travellers who like to feel clean. 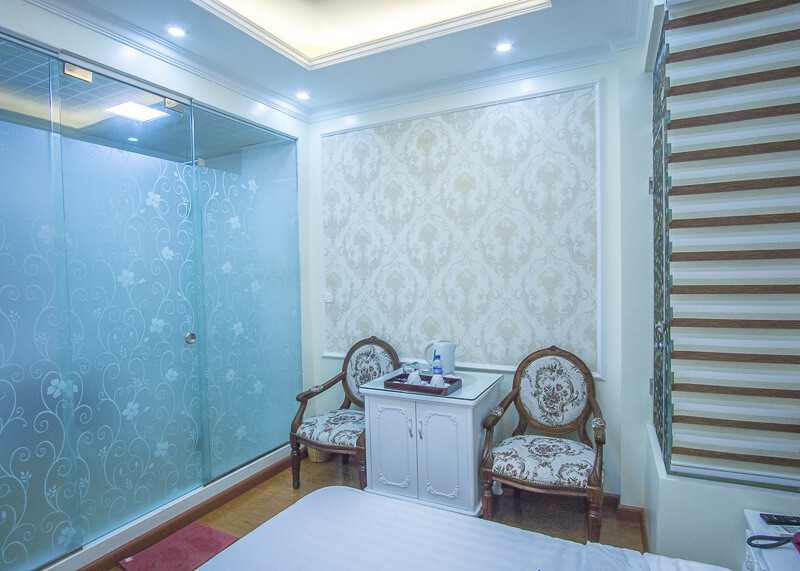 No windows in this hotel room

While I try to avoid places with no windows, the hotel price and location was too hard to resist

Hanoi is also very very noisy, but we slept well at night. Could it be because of the lack of window? We did hear neighbours from time to time, and the cleaners were pretty loud in the daytime. Again, that didn’t bother us at all since we weren’t sleeping. 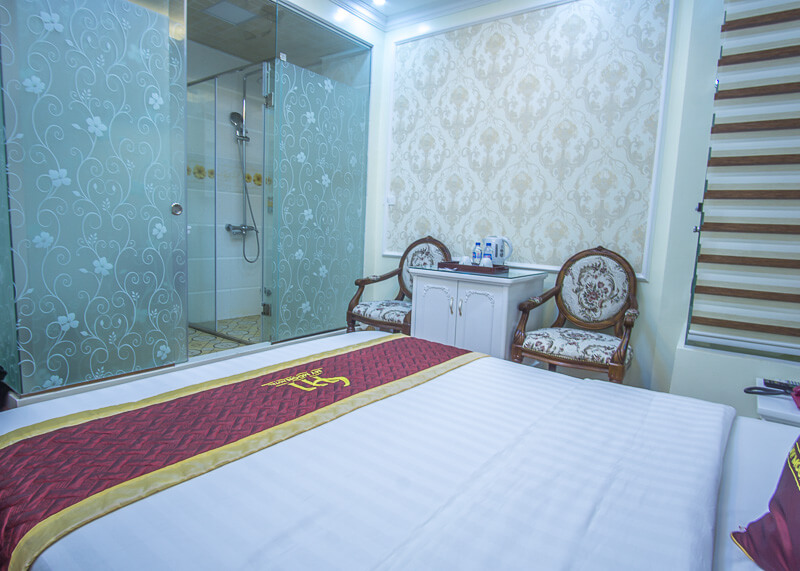 The bed was on the firmer side and might be a bit too much for some travellers. I personally prefer firmer beds (or sleeping on the ground) because it’s better for your back. 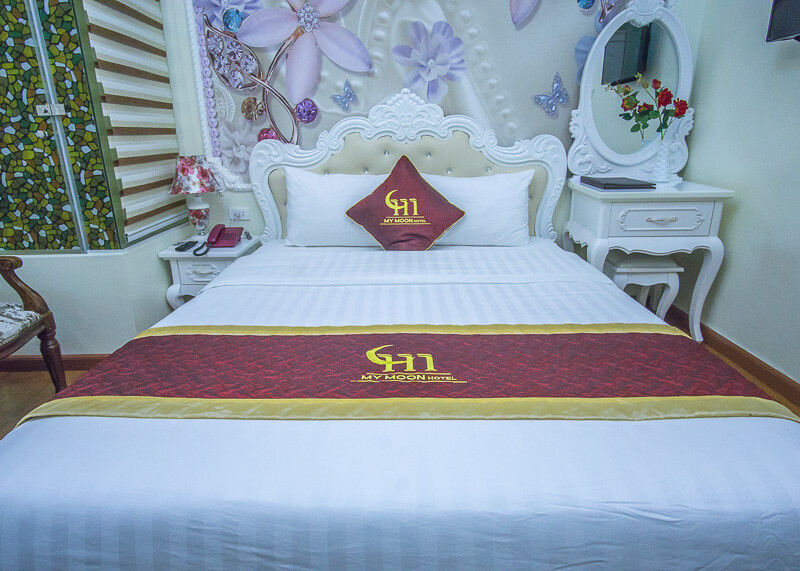 Firm (which is my preference) and clean!

The room definitely met the basics in that it was clean, quiet and functional.

The story behind My Moon Hotel Hanoi 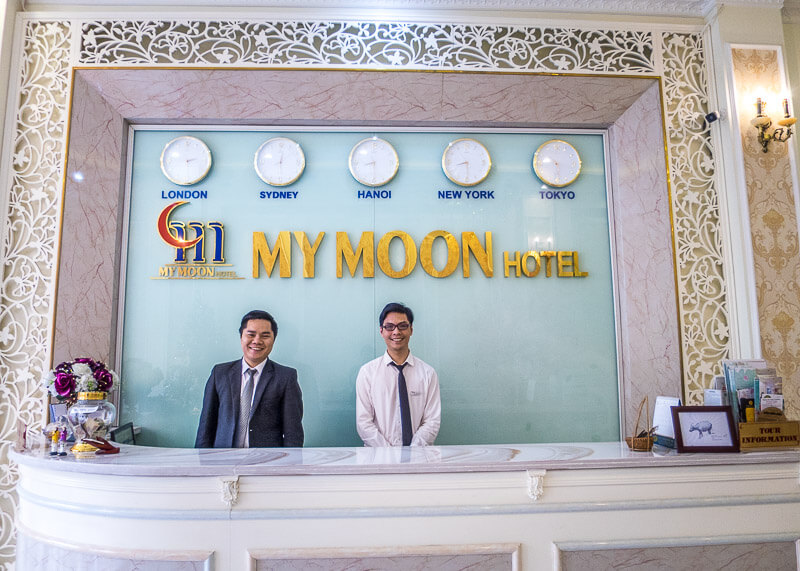 James with another friendly staff member

Tourism is relatively new to Vietnam compared to countries like Thailand. You can see that in daily interactions with the locals and opportunities for improvement in terms of infrastructure. However, James, the owner of the hotel, has a solid understanding of the needs of a traveller.

He’s also quite funny too. When I asked him if it’s safe to walk around Hanoi at night, he said “Don’t worry, no guns, no bombs in Vietnam. You will be safe.”

“Don’t worry, no guns, no bombs in Vietnam. You will be safe.”

I walked away laughing because he is right. Yes, petty theft is more common compared to Western countries, but at least you won’t die.

The service at My Moon Hotel Hanoi 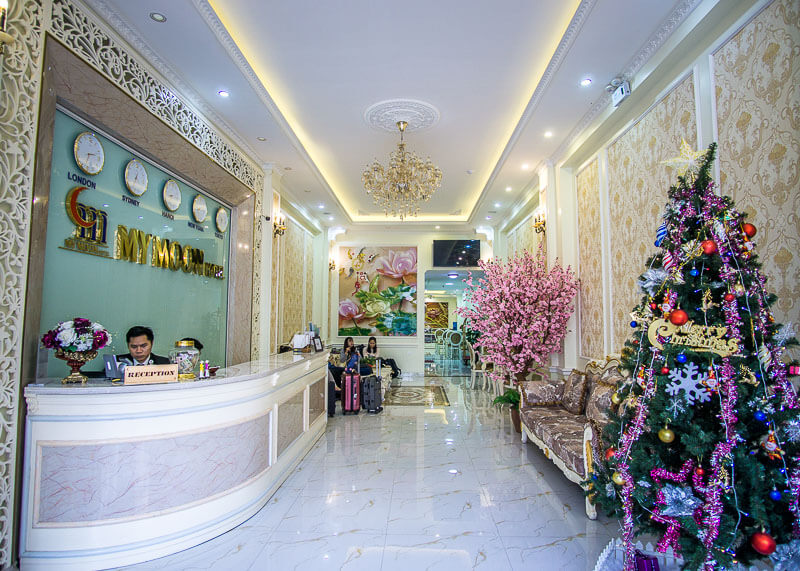 The lobby of My Moon hotel Hanoi

The service and care exhibited during our stay were quite impressive. James has experience working at international hotels, and it is evident that he brought those best practices to the hotel. The biggest issue I have with travelling in Vietnam is trust. Scams are quite frequent in Vietnam and sometimes, you don’t know if a vendor has your best interest at heart. I did not feel this was the case at My Moon hotel and trust me, I arrived as a very skeptical traveller. Let’s just say after getting to know James, I would not have been concerned with booking tours directly through the hotel. We also had no issues with booking airport transfer and our bus ride from Hanoi to Ninh Binh. Everything was easy and straightforward.

Aside from James, Henry and Linh are the sweetest members of the team. Henry is very genuine and so honest. He had the same perplexed reaction as the immigration official I mentioned in this blog post when he opened my passport and saw my very Vietnamese last name. In case you are wondering, I am half Vietnamese but don’t look the part apparently.

I will mention though that some staff members are SUPER eager to sell you a packaged tour and it can be a bit overwhelming. But it’s a learning curve for them, and I’m sure under James leadership, they will get there. You can see that in the way James mentors his staff.

An example of how he mentors his staff about cultural differences

In case you didn’t know, Vietnamese people are very straightforward and often don’t have a filter. It is entirely reasonable for Vietnamese people to ask about your salary, age and marital status. Yup, and pretty much any other question that Western people consider personal. I’m quite blunt, but Vietnamese people are next level blunt. I remember the first time I met one of the staff members at the hotel. Having met her for the first time, I was overwhelmed by the rapid succession of questions she would ask me. Nothing personal, but basic things like why I didn’t eat breakfast and where I am from ethnically. But at one point, she caught James eye, looked down and said “oh, sorry” and stopped asking questions. From there on, she tried to be aware of the cultural differences and adapt accordingly.

Organized transfer from the airport from My Moon Hotel Hanoi

I try to arrive in a city before sunset to avoid travelling at night. Unfortunately, it wasn’t possible with our Chiang Mai to Hanoi flights because it was way too expensive to fly earlier in the day, so we arrived late in the night to Hanoi. I was concerned about getting from the airport to the hotel safely, so we arranged for a transfer directly to the hotel. 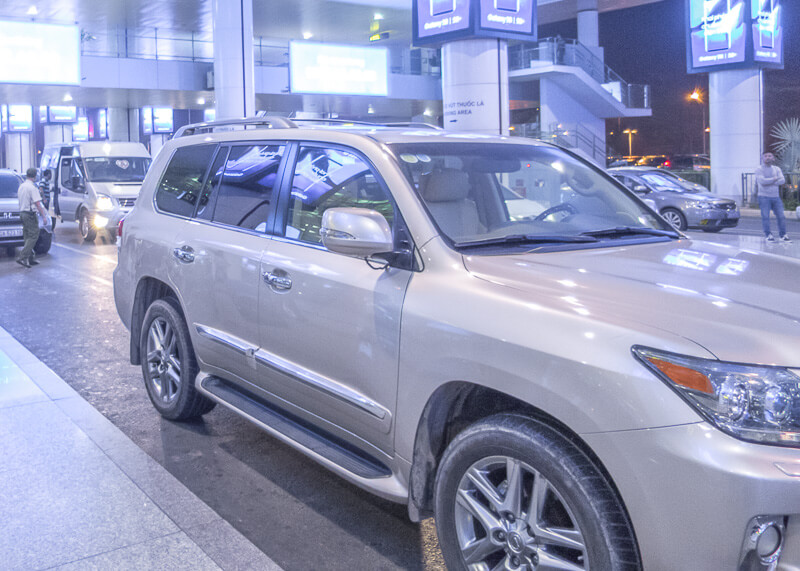 Our ride to the hotel

Our driver came to pick us up promptly and we arrived safe and sound at the hotel.

Breakfast at My Moon Hotel Hanoi

I only had breakfast once on my last day at the hotel before heading to Ninh Binh. I know, terrible, but I didn’t want to fill my stomach with all the yummy food we’d be eating in Hanoi! It was delicious and well worth the value.

I will mention here that the staff makes a huge effort to get to know their customers. It got to the point where one staff member would notice that I never come down for breakfast. She would often check up on me, see why I missed breakfast and asked if there’s anything she can do for me. One time, I ran into James after breakfast was over. She must have told him I didn’t have breakfast because he offered to have his staff prepare breakfast on the go for me. I declined but was impressed at the attentiveness of their staff. They clearly did not know about the 10+ meals I had planned for the day in Hanoi (there’s a lot of good food in Hanoi).

The location at My Moon Hotel Hanoi 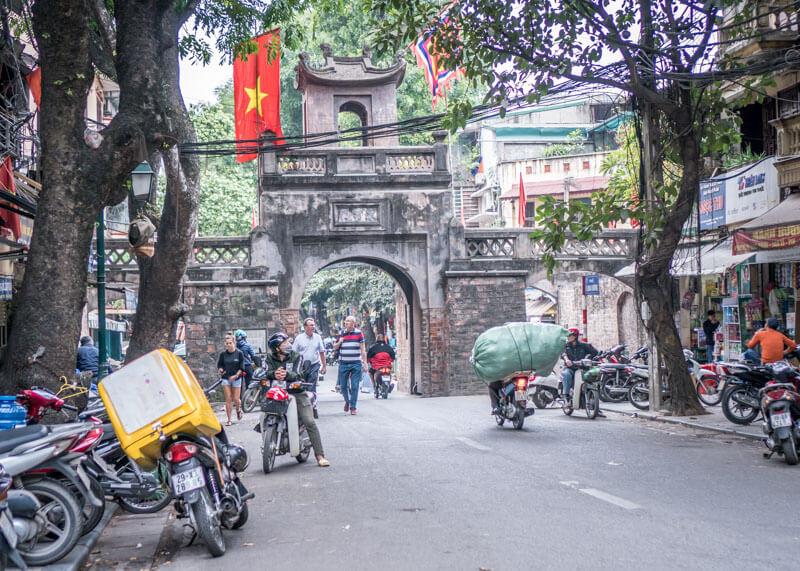 The location was perfect for us and one of the biggest reasons why we booked this hotel. It was just steps away from the old quarter. Since we spent almost all our time eating, it was very convenient for us to walk around Hanoi. The city is hard to get by on public transportation because it’s nonexistent. That meant staying in a place that was walkable was a massive plus for me. I didn’t realize how much walking affected my experience until we stayed at the Sheraton Hanoi hotel when we came back after Ninh Binh. That hotel is not walkable at all, and we would always have to call a Grab to go back to the hotel.

How safe was the area around My Moon Hotel Hanoi

The area was very safe, even during times when we walked back to the hotel late at night.

I usually don’t feature hotels with no windows, but I was so impressed with My Moon Hotel that I could not keep this gem to myself. This place far exceeded my expectations and honestly made my stay in Vietnam so much better. 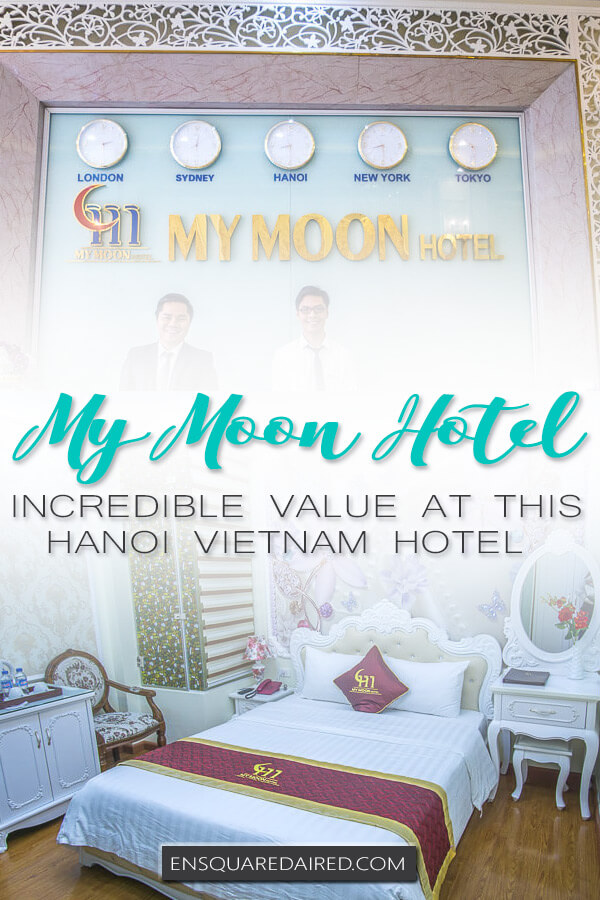 Hanoi Trip Blog | Being Scammed For The First Time In Hanoi

Trang An Grottoes Tour | Everything You Need To Know

Hanoi Trip Blog | Being Scammed For The First Time In Hanoi

Trang An Grottoes Tour | Everything You Need To Know