You are here: Home / Destinations / Bagan Travel Blog During Our Slow Travels (Part 1) 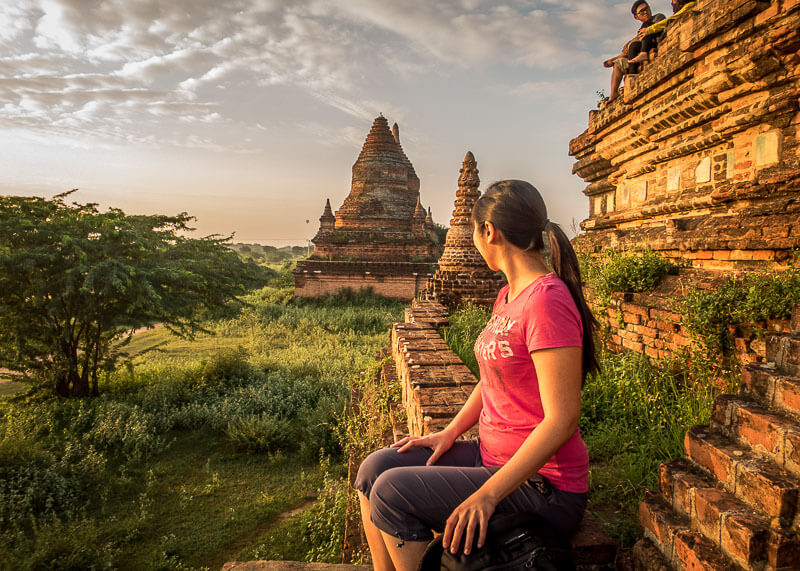 Bagan travel blog notes from our year of travel

After taking the bus from Mandalay to Bagan, we arrived late in the afternoon and checked into our hotel. Since we were staying in Bagan for five nights, we spent the first day taking it easy. You know, check in, grab snacks and look for dinner. I’m starting to have a preference for treating the first day in a new place with little to no plans.

We walked around once we dropped our stuff and learned that no supermarket is within a 20-minute walk from our hotel. Boo. So Gary decided to rent an e-bike to get us to the nearest grocery store. It was a good testing ground anyways since we’ll be spending the next few days getting around by e-bike.

The differences between Mandalay and Bagan 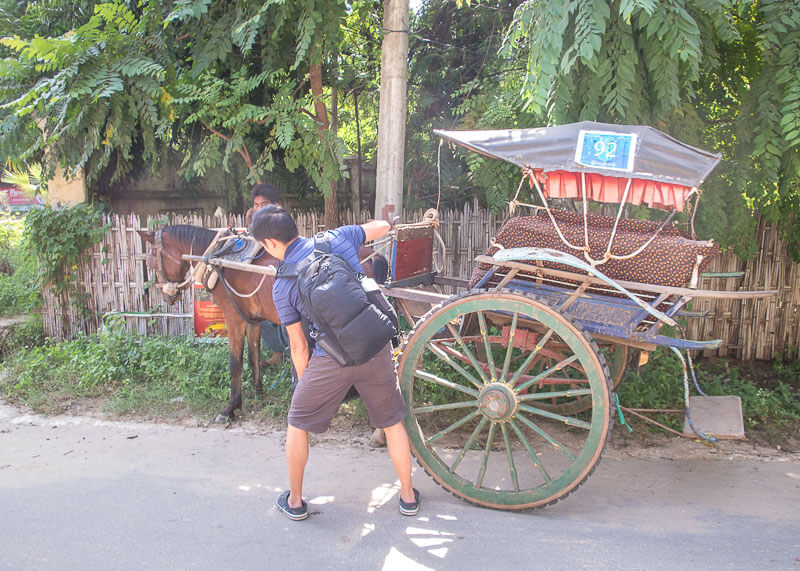 Our ride from the bus station to the hotel. Some roads are so small that the only way to get to them is via horse carriage…

Contrary to Mandalay where the streets are modern with lots of cars, Bagan was the opposite. The cars were quite old, though in excellent condition. The driving was also very confusing. The steering wheel is on the left side of the bus while regular cars have the wheel on the right side. But they all drive on the right side of the road!

I later learned that there was a reason behind all this madness, which you can read more in this article here.

Driving an electric bike (aka e-bike) for the first time

Before Bagan, I’ve never heard of e-bikes. When I read that they are the best way to get around Bagan to see temples, I imagined them to look like regular bicycles. Except with an electrical component so that lazy people like me don’t have to pedal. I’m sure they may look like that in other parts of the world, but the ones in Bagan are akin to scooters.

One look at the bikes and I felt terrified. I am the world’s most klutzy and uncoordinated person. The idea of riding those things alongside regular traffic made me think of ways to walk to all the temples.

Gary was comfortable with e-bikes, so we rented a two-person e-bike to get to the nearest market.

The hotel staff spent some time teaching him how to ride the e-bike, but he struggled to leave the hotel parking lot. I, of course, was dying of laughter (and also petrified of maneuvering that thing!). It was a struggle to balance the bike! There was this whole weight balance situation plus giving it some gas – not easy at all! The bike somehow crashed into my ankle, and I was about to give up on the whole thing.

Anyway, I ended up walking to the grocery store while Gary trudged along ever so slowly. We must have been a hoot to watch for the locals. 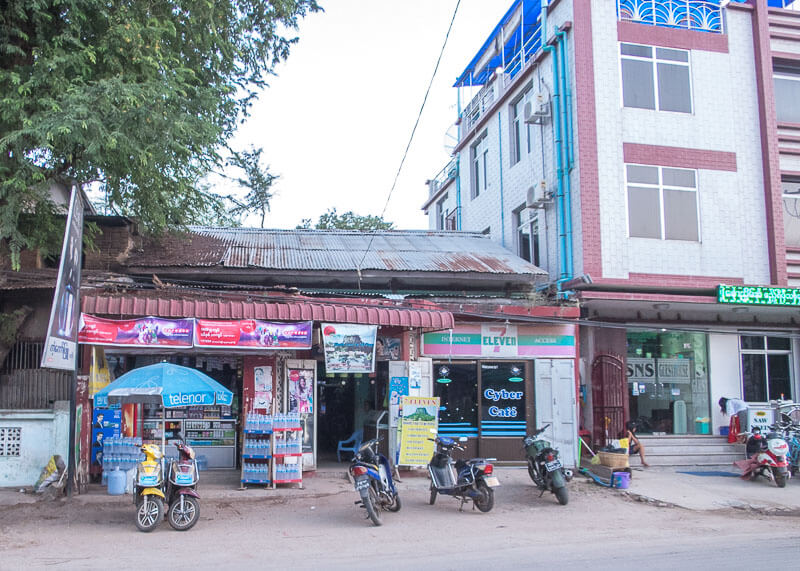 Don’t be fooled, that’s not a real 7-eleven! You have no idea how much I wished for a good convenience store in Bagan!

Realizing that I may not be able to drive the e-bike, we came back to the hotel and asked for a second lesson. Surprisingly, riding the single passenger e-bikes was a LOT easier than riding the double passenger bike. I think a lot has to do with the weight of the bike. The dual passenger bikes are heavy, making it hard to balance while driving to get it to move forward.

Once I was confident enough that I wouldn’t crash into anyone, we headed straight to bed so that we could wake up at 4 am the next day. I can’t tell you how excited I was to be catching the moment I’ve been dreaming of since 2011. 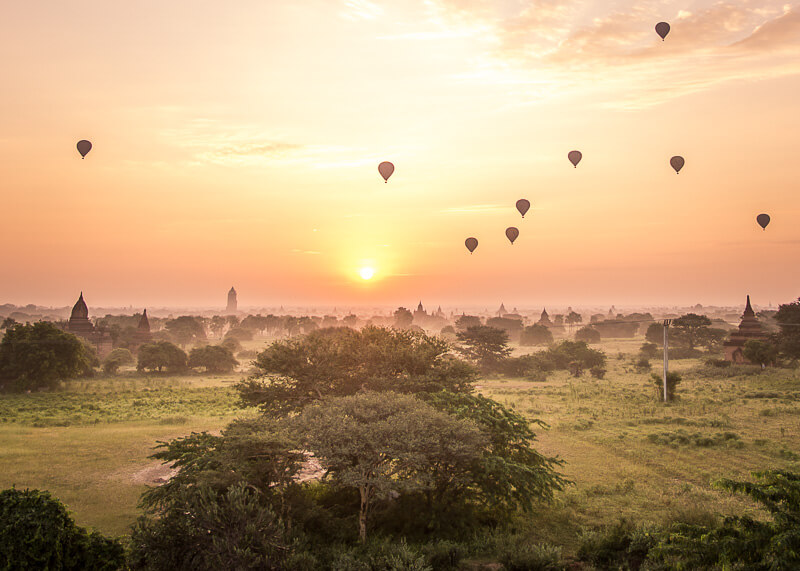 Seeing the sunrise for the first time in Bagan

I was still dead tired despite going to bed at 8 pm. I almost questioned why I was waking up so early and if I even needed to leave for the temples at this outrageous hour.

But we did, and it was so worth it.

Once we finished catching the sunrise, we went back in time for breakfast and napped for a very long time. We woke up at 3 pm to grab dinner and then catch the sunset at Buledi temple (also known as Temple 394). 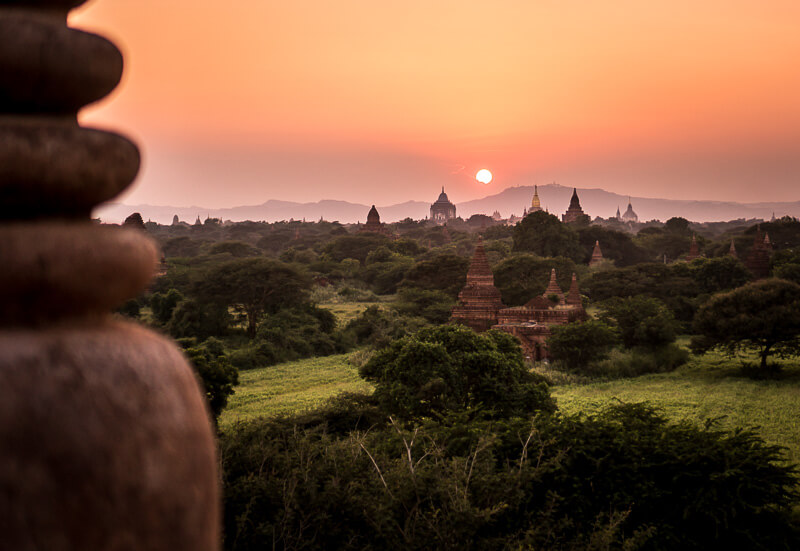 Catching the sunset in Bagan

We met some fellow travellers who also happened to be travelling for a year. We spent the evening exchanging travel stories and agreed that one year of travel is not enough. It gets so addictive and now I just want to extend our trip.

Once the sunset was over, we rushed home to go to bed by 8 pm so that we could wake up early to catch the sunrise again the following day.

Day 3: Sunrise round two at another temple 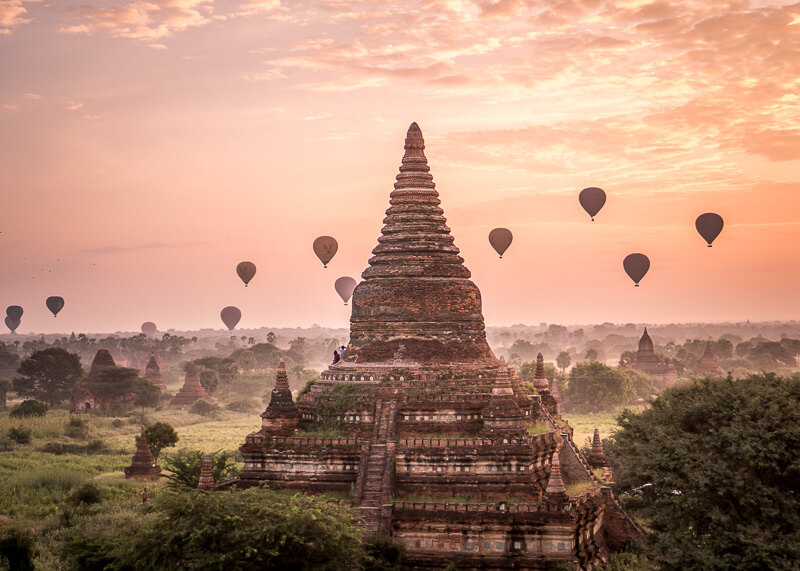 We sat at that temple to watch the sunrise the previous day!

I tossed and turned the whole night because I was SO EXCITED about catching the sunrise. Despite sleeping less than six hours, I woke up feeling refreshed and alert.

The sunrise was magnificent; much more beautiful than the previous day’s sunrise. We ran into the same vendor who tried to sell us paintings at the top of the temple the previous day. 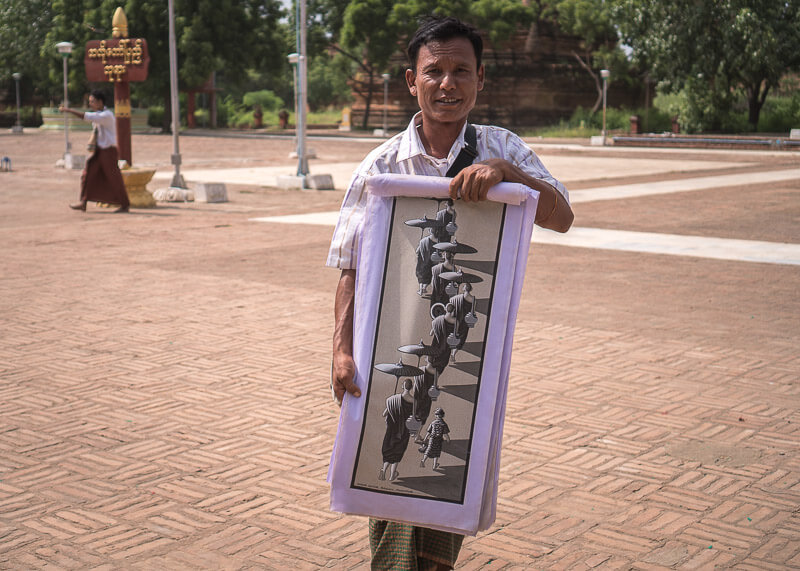 Gary and I had a temple all to ourselves for a good hour the previous day before we heard a man huffing and puffing behind us. I turned around and said “mingalabar” (hello in Burmese) to him because I say hi to everyone and did not have my guard up at the time. It turns out; he is a (really lovely) seller who ran all the way to the temple to try to sell his paintings to tourists. He missed the sunrise crowd big time

Once again, Aung Aung attempted to convince me to buy some pictures. I say I can’t, and he responded that he understood and said goodbye. I can’t tell you how rare that interaction is with a vendor in Asia, where you say no you can’t buy from them and they politely say farewell and wish you a good day. 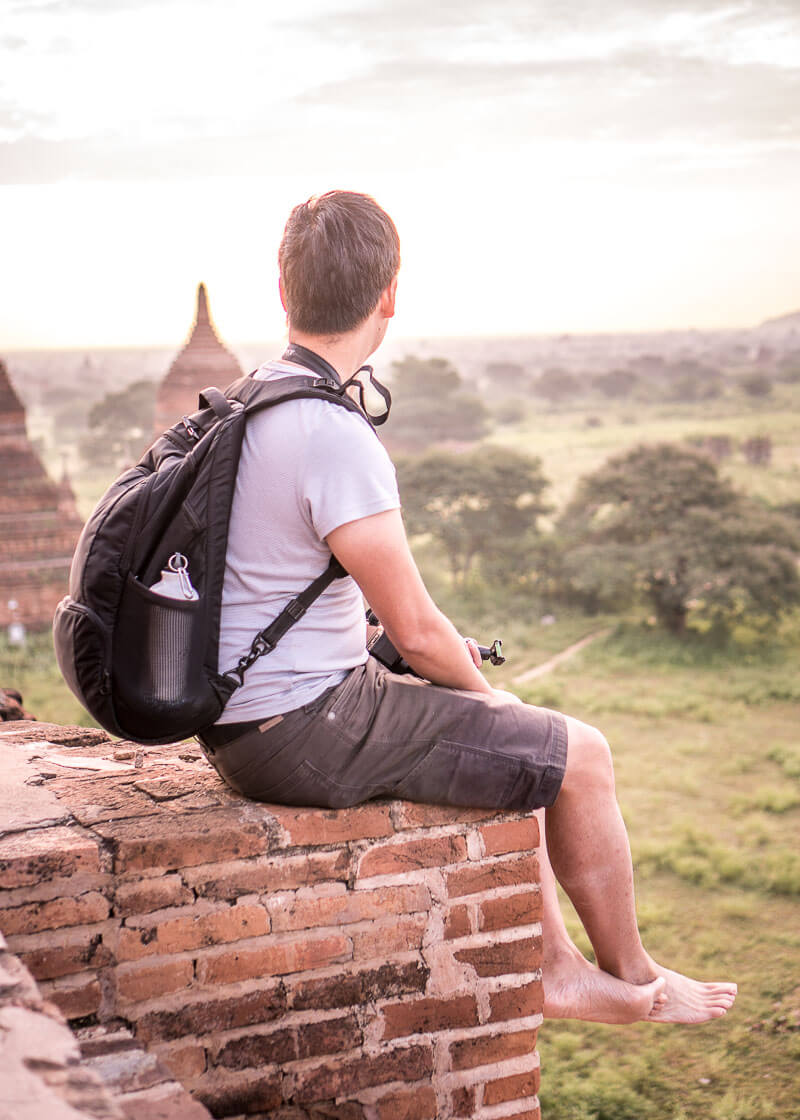 Sunrises are SO beautiful in Bagan!

By around 8:00 am, we headed back for breakfast before going out to do some temple hopping. The morning felt cool, chilly and super cloudy.

We were hoping it would remain this way throughout the day but NOPE, it was hot as heck! 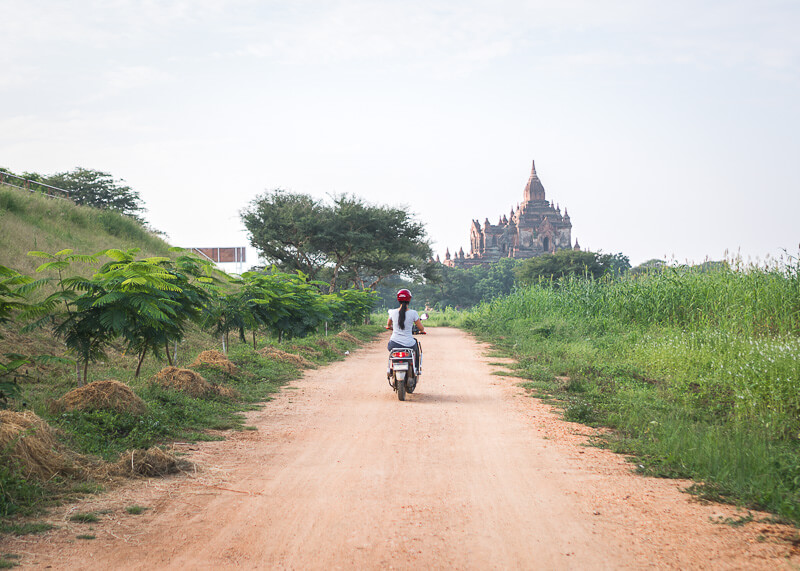 We first went to Htilominlo Temple 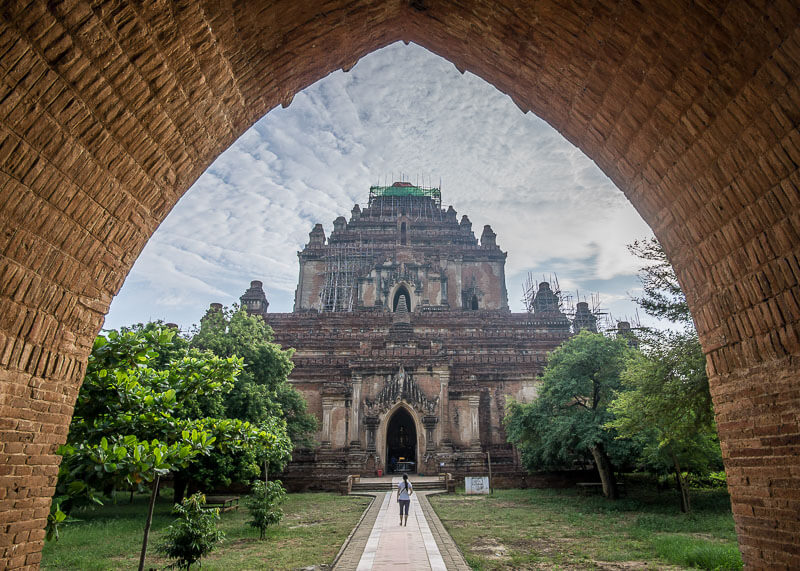 A lovely temple to visit in Bagan 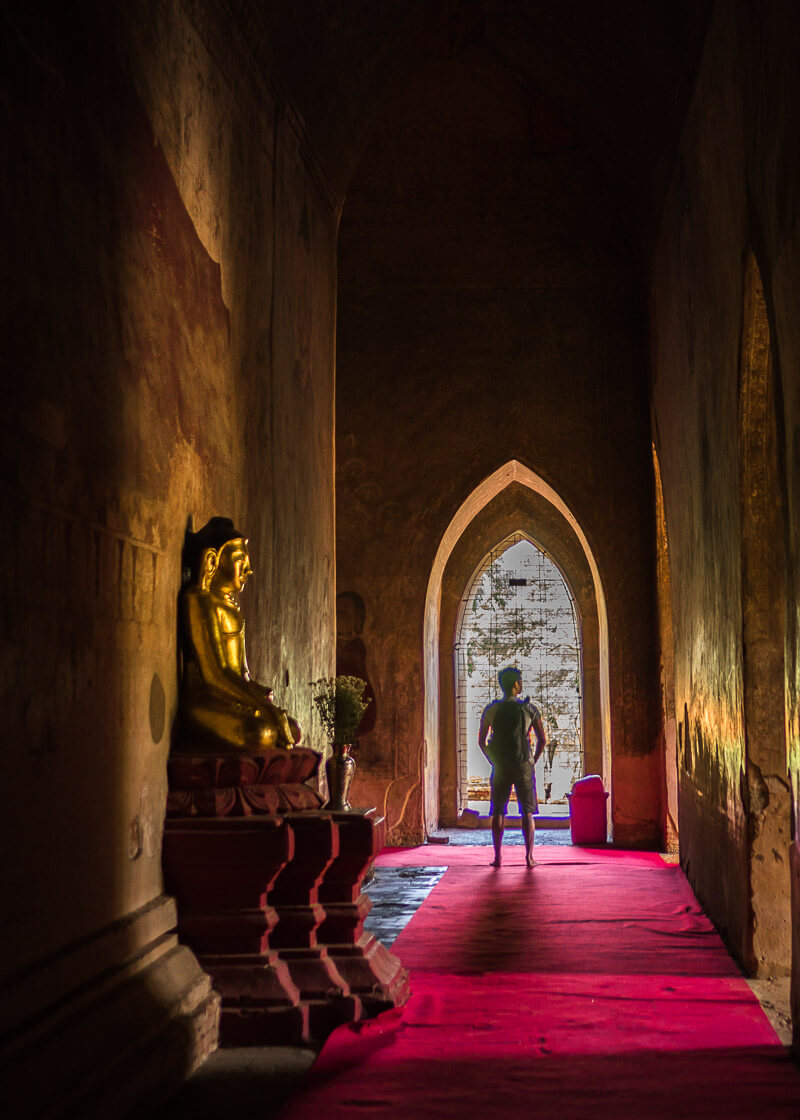 The interior is just as beautiful

After some time at the temple, we moved to the next one, called Shwe Leik Too 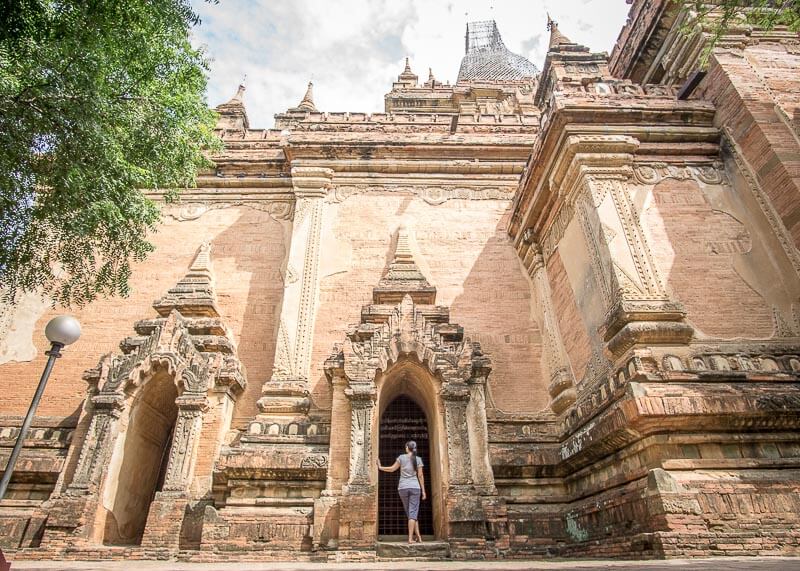 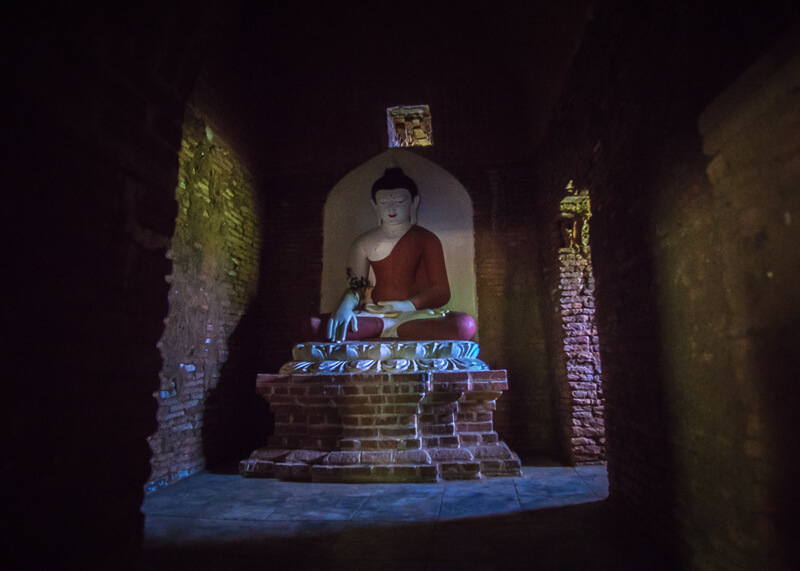 It took us FOREVER to figure out that there is a passageway to climb the top of this temple…can you figure out where it could be from this photo? 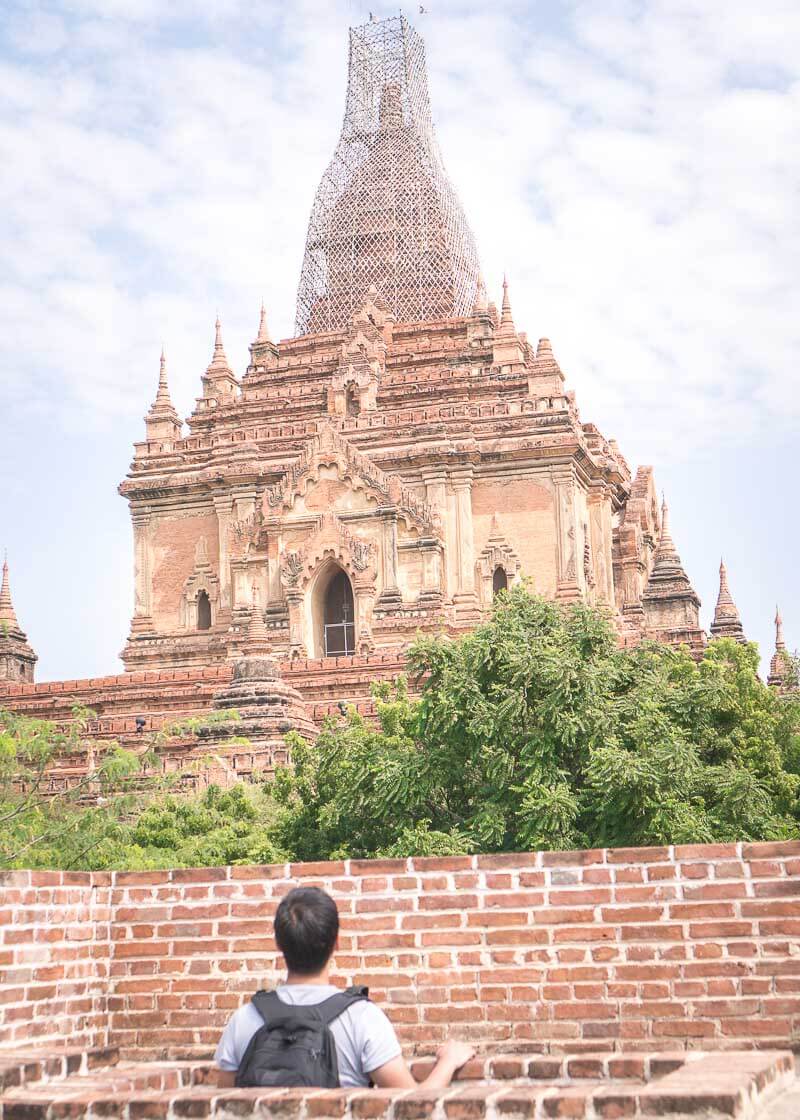 The dark and narrow passage we had to climb up to catch a beautiful view of Shwe Leik Too! 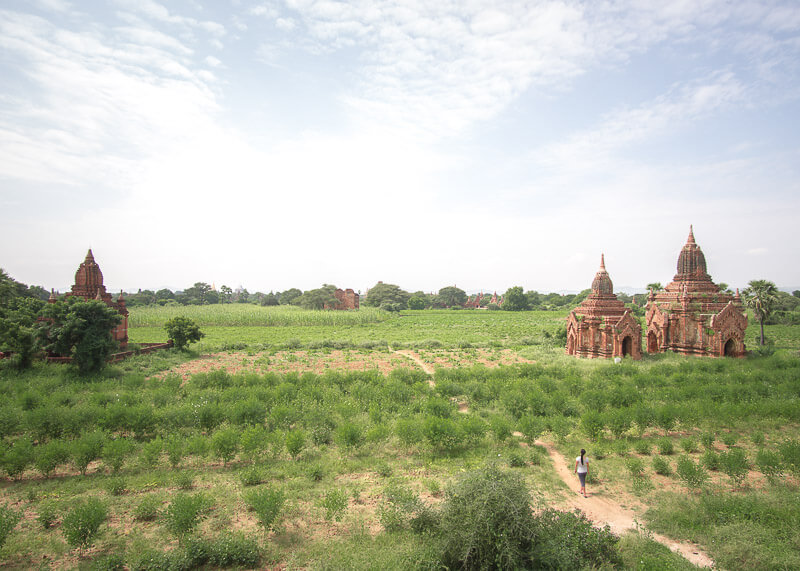 Not a soul in sight!

We then headed to Ananda temple 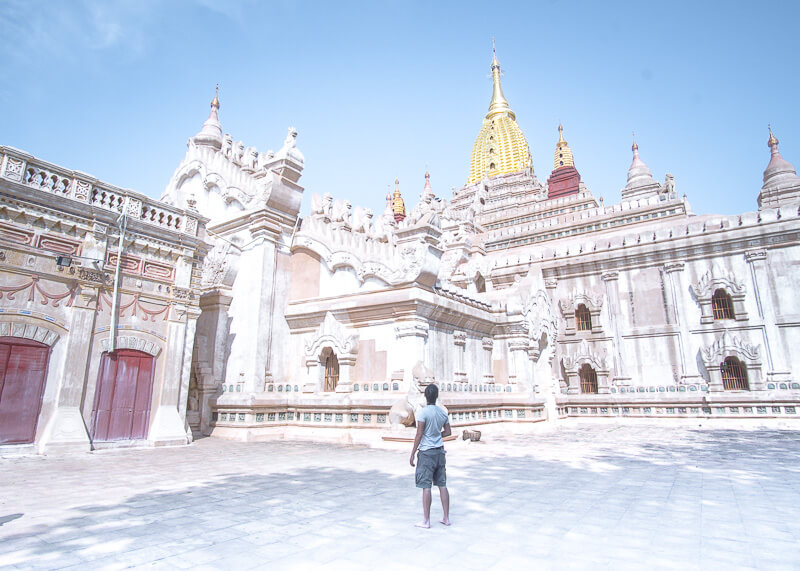 We then decided to call it a day and head back home. The heat was getting to us, and by 4 pm, we were dead tired. To be fair, we had been up since 4 am in the crazy Bagan heat.

Despite plans to make every sunrise count in Bagan, we ended up missing the sunrise because sleeping in was more significant than seeing another one. Luckily, it was cloudy so visibility wouldn’t have been that good anyway.

Despite sleeping in, we were still out of the hotel by 7 am.

Our first visit was at Ywa Huang Gyi Temple 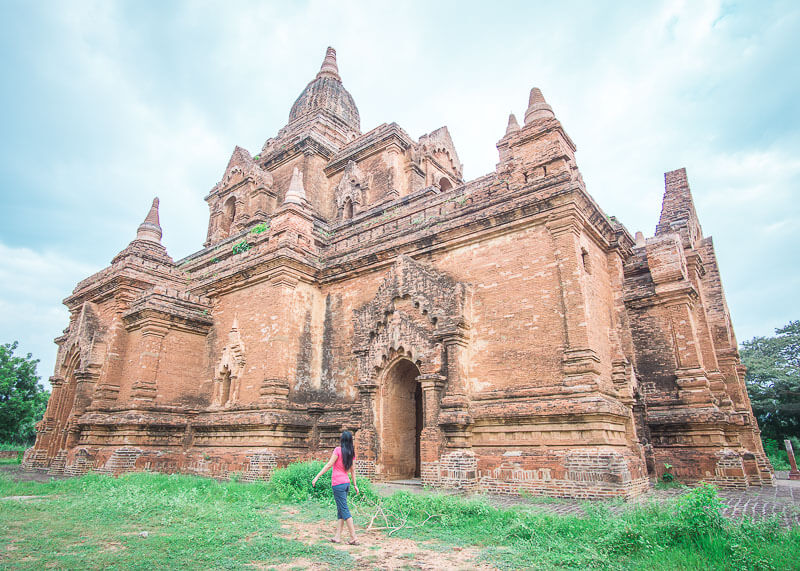 We have this temple all to ourselves!

There was not a person in sight when we arrived at this temple. The reason for the lack of crowds was likely because people were either watching the sunrise or back at the hotel eating breakfast. Perfect for us to enjoy the area without being disturbed, and the weather was still nice and cool. 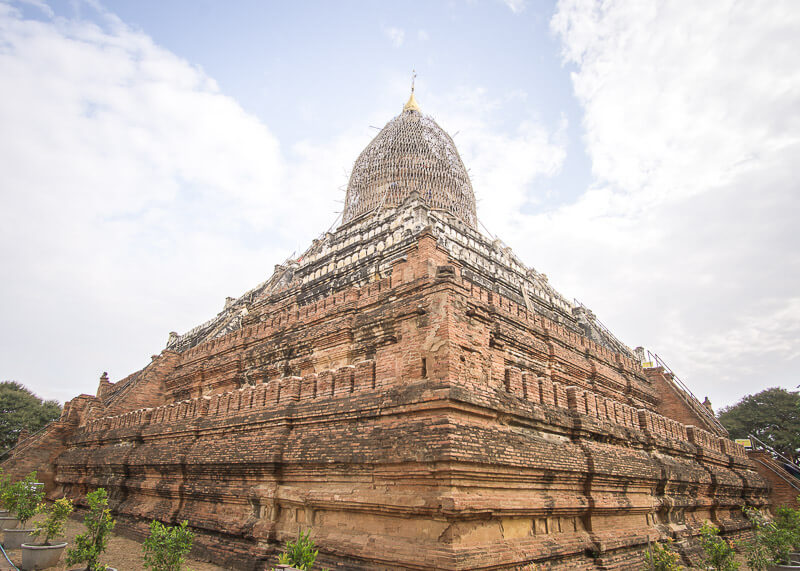 Sadly, people were forbidden to climb to the top. We were hoping that the closure was temporary, but it doesn’t look like the case.

This temple was charming to look on the outside, but we didn’t bother to go inside. 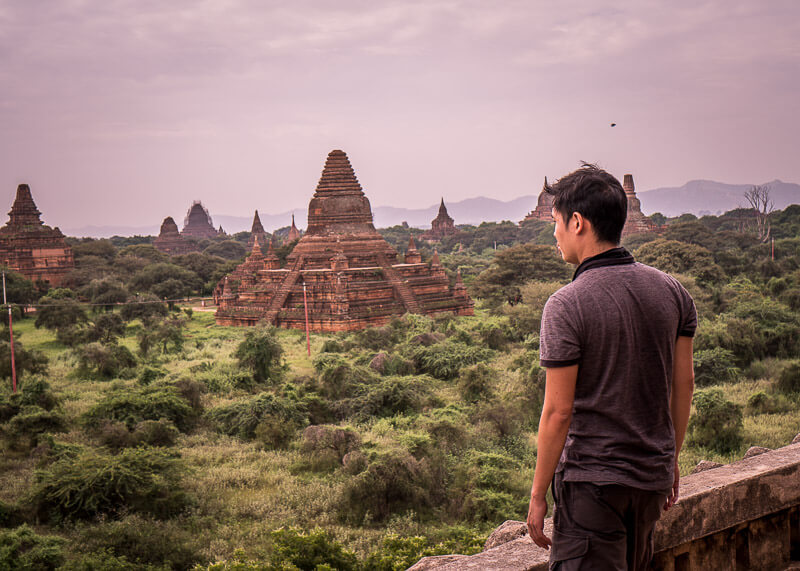 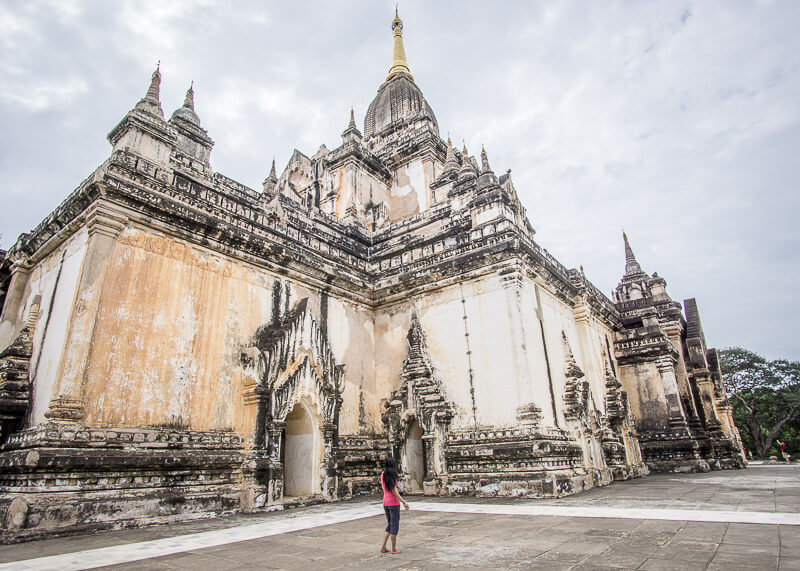 This temple reminded me of Ananda temple 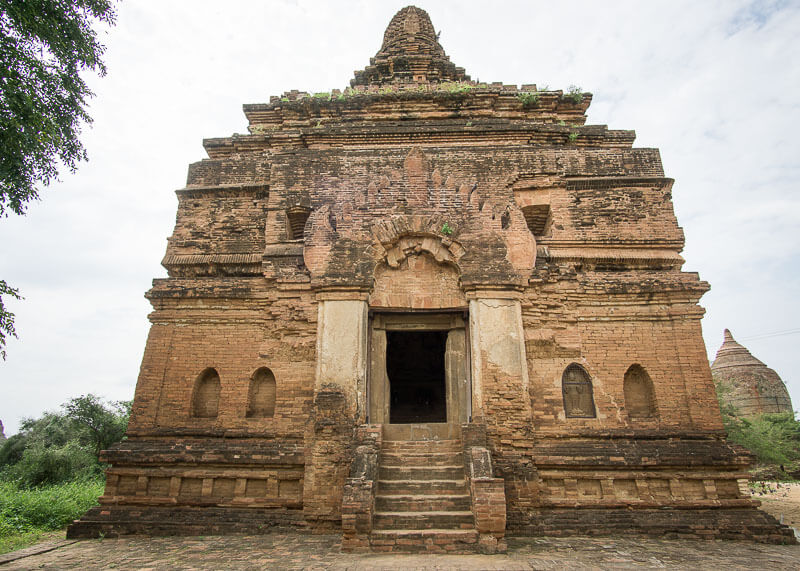 The only Hindu temple in Bagan

We wanted to go inside, but there was a seller who kept following us around. She would not leave us alone and kept offering a “free tour.”

We ended up becoming more fascinated by the cute puppies in the area (the same puppies I talked about in this collection of heartfelt dog stories!), which made the seller think we were weird.

See more photos and read part 2 of my Bagan Travel Blog diaries in this blog post!

Did you visit Bagan? Share your experience and your favourite moments in the comments below! 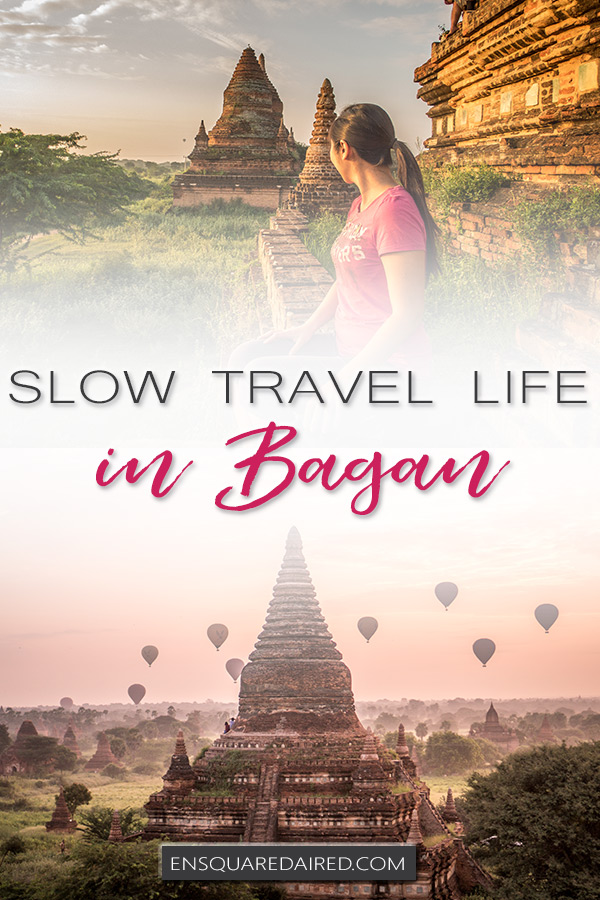 Bangkok Travel Blog Diaries From My Year Of Travel

Previous Post: « Is Grammarly Worth It? Read This 2019 Grammarly Review First
Next Post: Bagan Trip Blog During Our Year Of Slow Travel (Part 2) »

Bangkok Travel Blog Diaries From My Year Of Travel