You are here: Home / Destinations / Bagan Trip Blog During Our Year Of Slow Travel (Part 2) 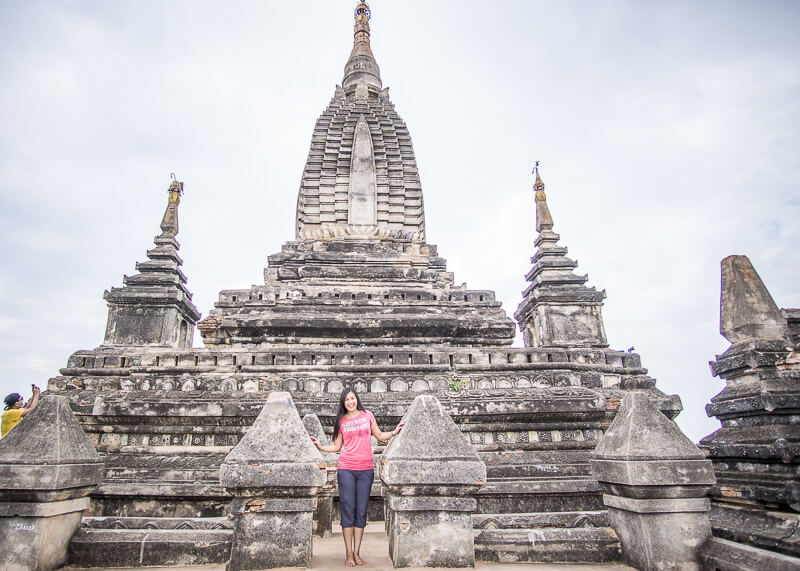 I’m sharing a mishmash of my thoughts in Bagan during my year of travel. If you missed the first part of my experience in Bagan, you can find part 1 here.

The touts in Bagan are super aggressive 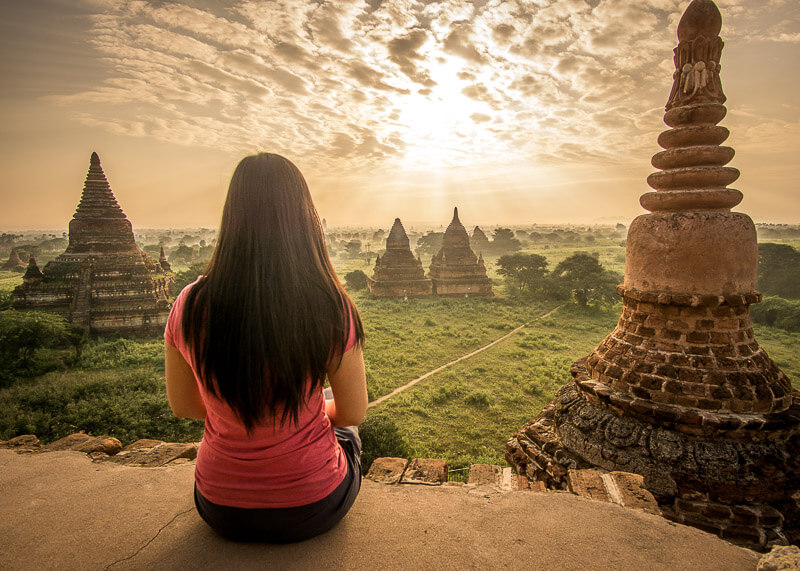 Luckily, there are no touts around during sunrise. They don’t wake up that early

Especially the ones at prominent temples. Each time we parked our e-bike, they’d come to us and stand there watching us. They’d always try to talk to us and tell us it’s ok; we don’t need to buy anything, they want to talk (LIES!). One guy was super aggressive and kept trying to get us to buy things. His last resort to get something from us was by asking to exchange Kyats for USD.

One lady seemed so lovely and sweet, telling us everything about the temple. In the end, she showed us her shop and asking us to buy something. They also kept following us and would not leave us in peace, which was super annoying.

The only person who was reasonable and not pushy was this guy: 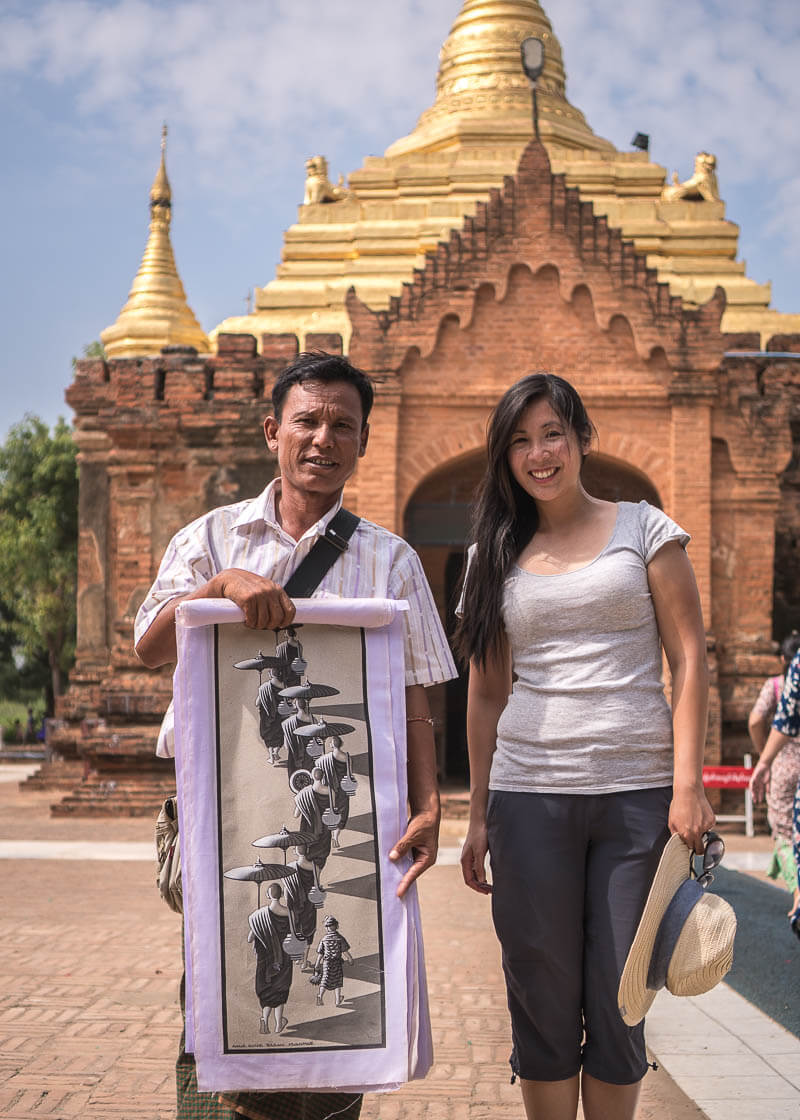 This man’s name is Aung Aung, and we ran into three times (twice during sunrise!) while we were in Bagan. Each time he ran into us, he’d very politely ask us to buy his paintings. I told him I couldn’t buy his paintings but later decided after this last encounter that I’ll buy from him if we ran into him the fourth time. We never saw him after this photo 🙁

A lost sandal at Bu Paya 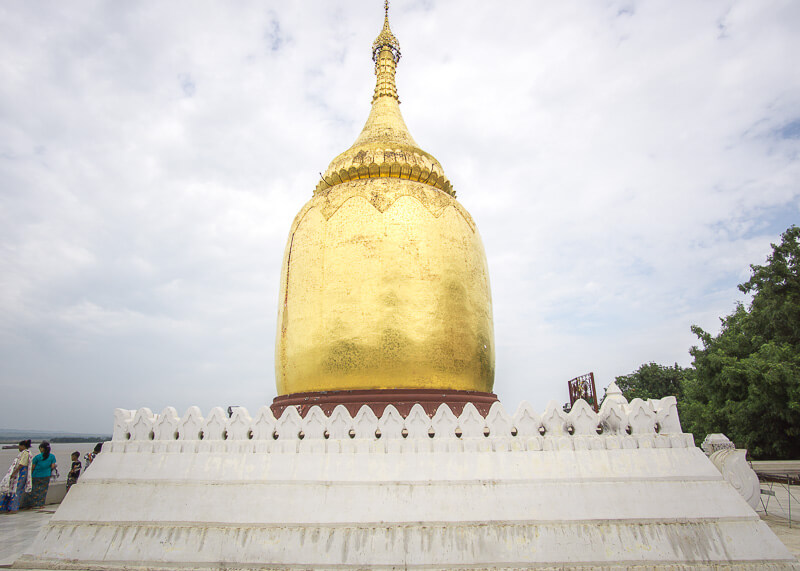 After our visit to Bu Paya, I walked back to the entrance to look for my sandal so we could leave. But I could only find one sandal – the other one disappeared. I was confused and kept looking around but to no avail. Some of the Burmese people saw my confusion, panicked, and before you know it, four people were helping me find my lost sandal. It took six people (including Gary and I) a good five minutes to search for the shoe. We eventually realized someone had kicked it about 10 meters away from the original sandal. Crisis averted. 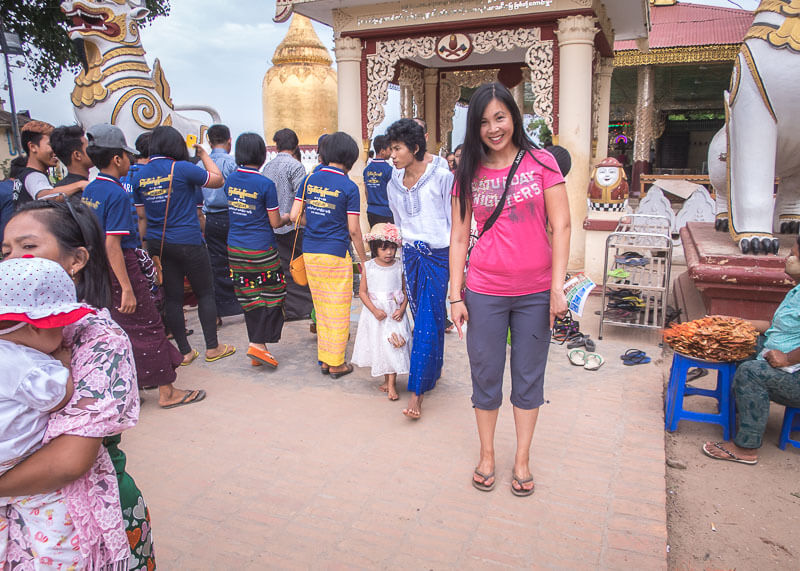 The area where shoes are removed has very high traffic!

I was more perplexed than anything but felt touched at how concerned and helpful they were that I lost my shoe. 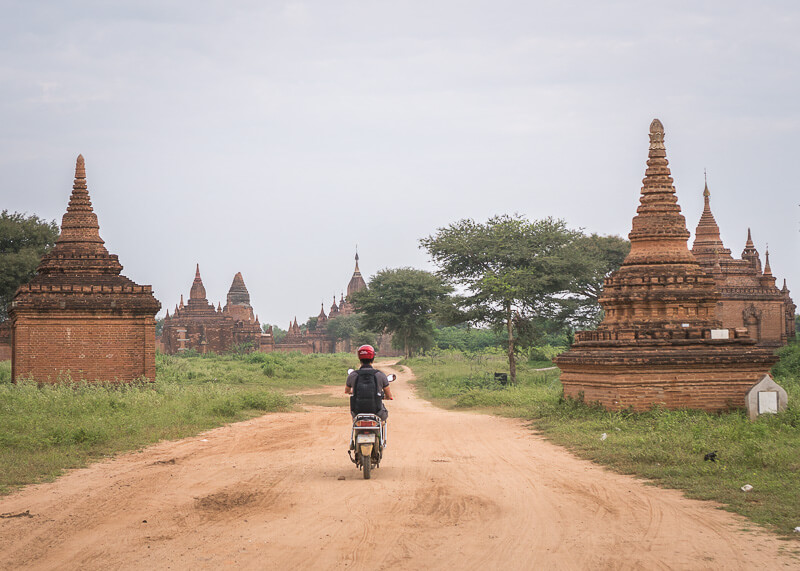 Biking is very peaceful and quiet in Bagan. We loved finding temples that are so remote that the tour buses cannot get to because no tour buses meant no crowds

I got pretty used to riding an e-bike by day five. I had to wear my glasses all the time though because it’s quite dusty in Bagan. The worst part was when buses drove past us and left us in a trail of dust.

I was still Oreo-obsessed while in Bagan

I’m sad to report that it was HARD to find Oreos so make sure to pack your favourite snacks before your trip.

We met the key holder and learned that he’s been working with the government’s archeological department since 1999. He used to be a security guard with a uniform and used to travel all over Myanmar. He’s initially from the village before he became the key holder to this temple. The government also gave him a home since he took on this keyholder duty.

Few people know of this temple since it’s not on the map, so it’s never crowded. 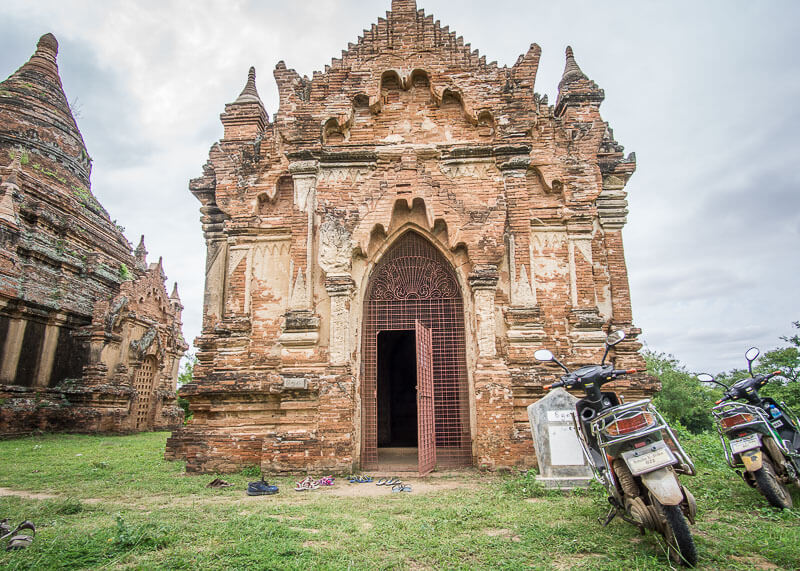 The hidden temple is one of my favourite temples in Bagan 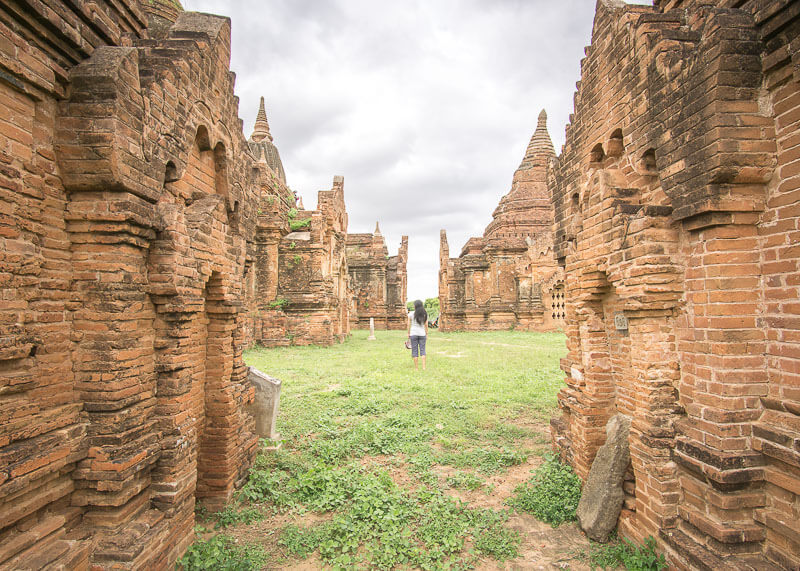 It was so quiet and peaceful at this hidden temple

The passageway is quite small and narrow. Only one person can go up at a time. It was super dark, and we needed a flashlight to make sure we weren’t stepping on any snakes. 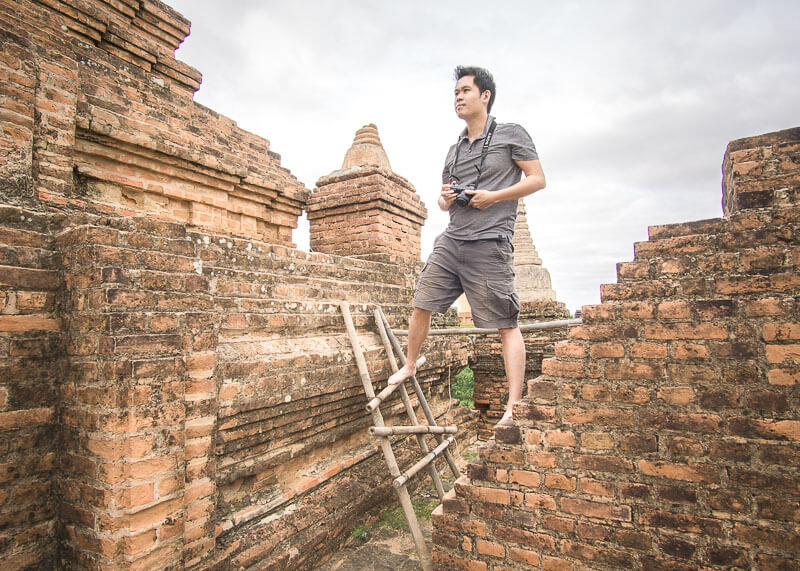 The ladder was quite possibly the most ghetto ladder I’ve ever seen, but it’s very sturdy! Someone put some time into building it 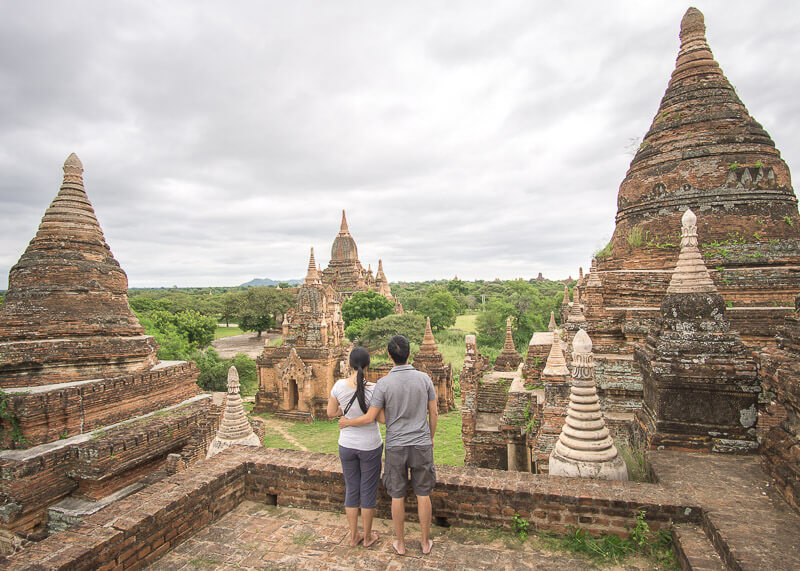 We had the whole temple to ourselves for at least an hour before someone saw us at the top of the temple. Before you know it, there were ten people on the rooftop, making it quite crowded. Luckily, we were done and ready to leave by then

We then biked around, taking photos of temples that we liked.

We ended up returning to Sulamani temple

This temple is the base for washrooms since toilets are few and far in Bagan. As we were figuring out where to go next, we found a cluster of small temples right before our eyes. Talk about hidden gem hidden in our blindspot! 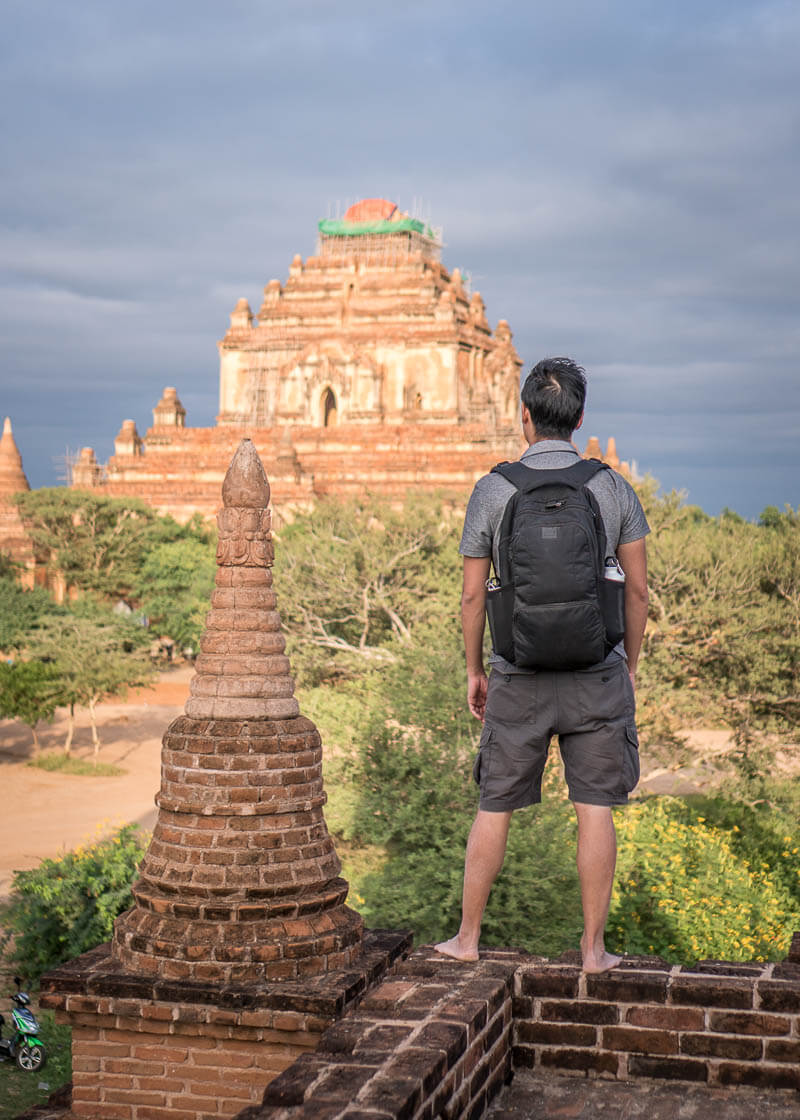 We climbed up and found an incredible view

The weather changed a lot in Bagan

It was really hot the first two days and cool the second. 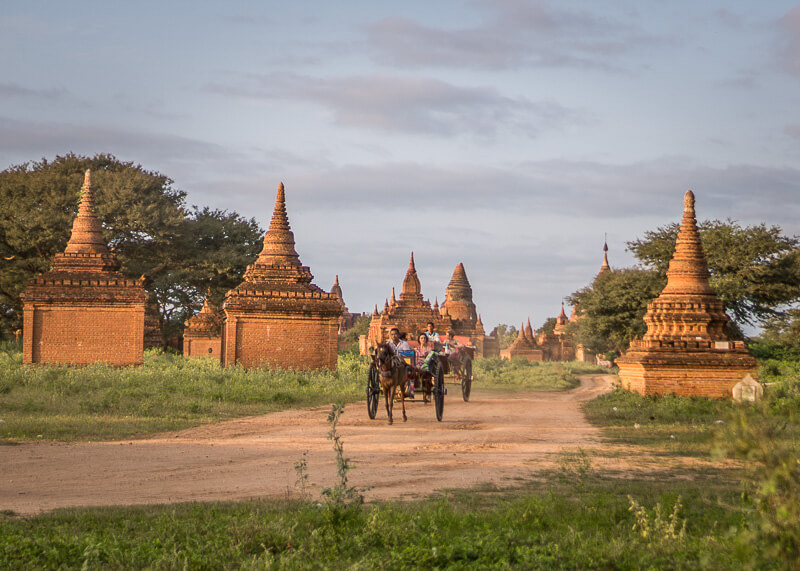 We spent over 8 hours outdoors almost every day 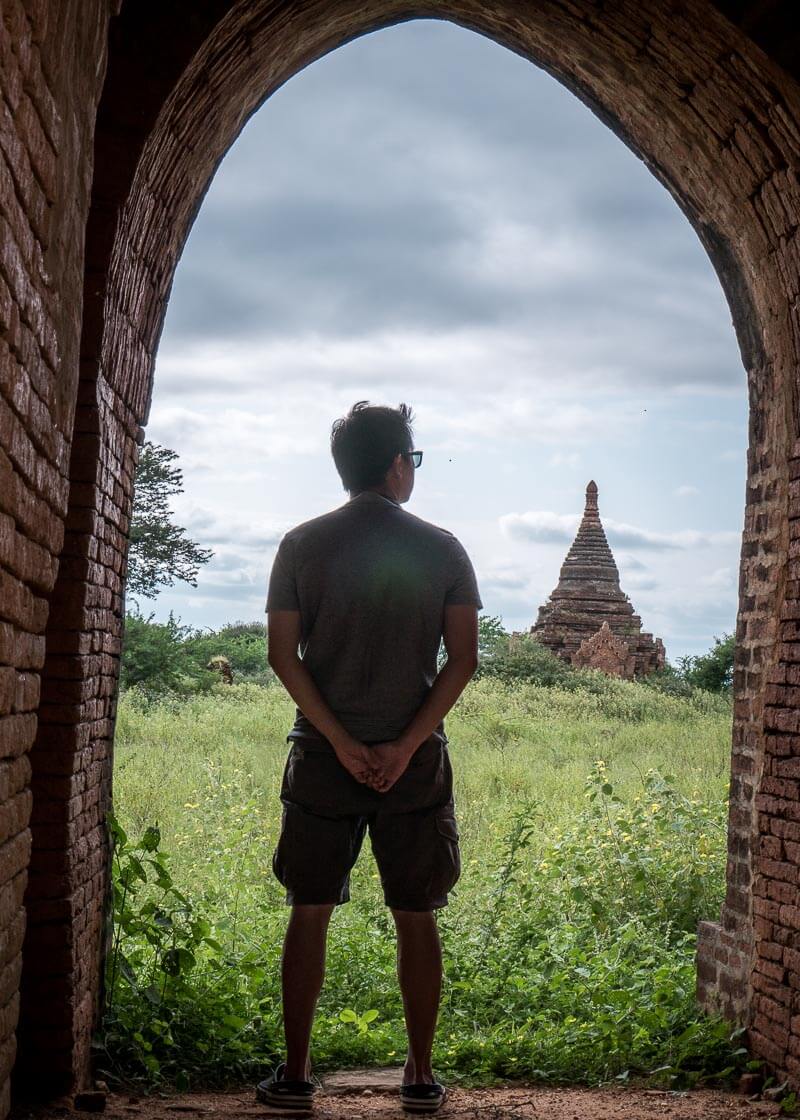 Never once did we feel unsafe. The most unsafe we may have felt was being squeezed between a bus and the sidewalk, but that was it. 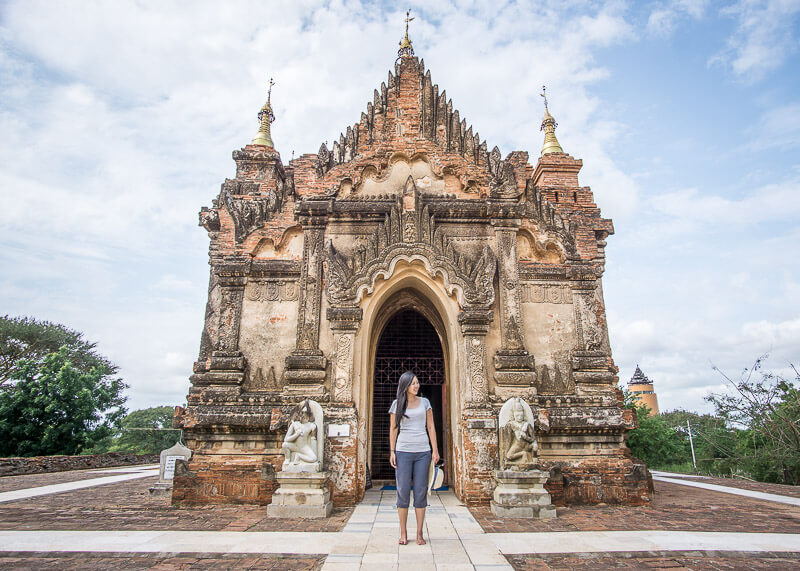 Most temple visits were planned, while others were surprises, like this one

I don’t think I’ve ever felt safe biking like this in any other Southeast Asia or even in Toronto at random hours, to be honest. 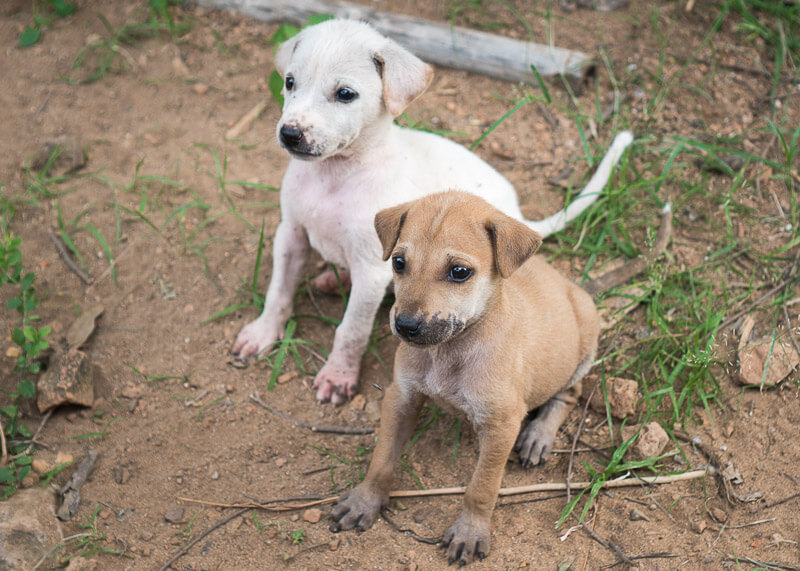 These poor little pups thought I was their mommy and sat upright, eager for a meal. They started crying when they realized I had no food for them and had to leave them 🙁

The dogs were skinny and would walk around with no confidence in them. Back hunched, timid – my dogs only have that look when they did something awful and they feel guilty. Here, dogs have that look all the time. And they eat leaves and tree bark for survival. 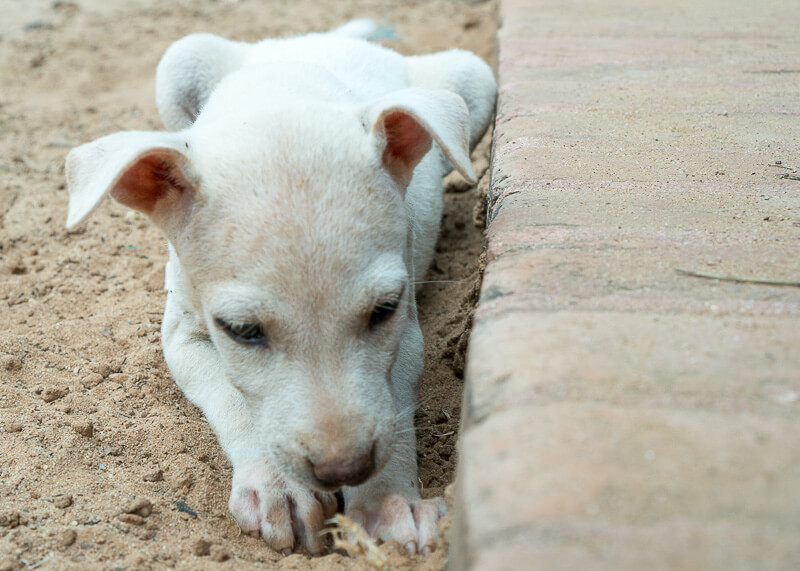 One of many adorable puppies you’ll find at temples. Cute, but hungry little creatures

Ok, my dogs used to eat grass when they were puppies by it was out of boredom or curiosity more than anything. Here, you can see the street dogs fighting for their survival. 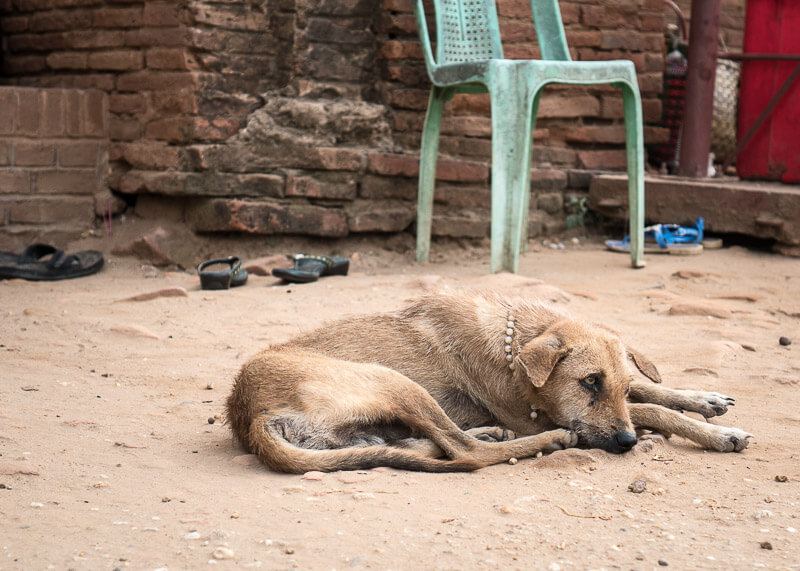 This dog has Buddhist prayer beads placed around his neck, possibly for good merit. Despite barely being able to provide for themselves, some of the locals still try to offer what they can to the dogs

I shared it with a stray dog (don’t do this at home!), and he just wolfed down and swallowed the bread whole. I’ve only seen my dog do that once when he didn’t eat for a day because he was being a picky eater and I refused to spoil him.

If you want to read more stories about dog encounters in Asia, you can find my blog post about them here.

The kids are ever so happy in Bagan

Each time we biked by a group of kids, they’d scream “hi” and wave frantically. Our waves were greeted with giggles.

Absolutely loved my time in Bagan 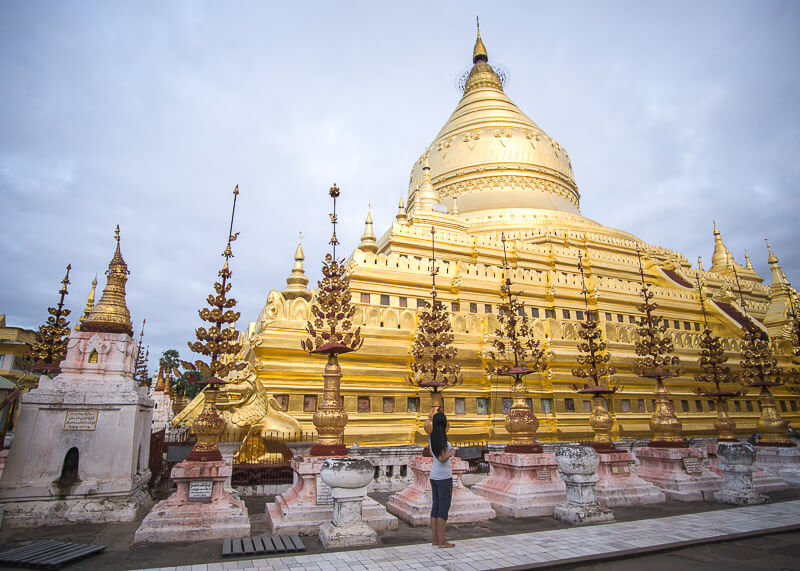 The last temple we visited before heading to Mandalay!

There was so much freedom to get on an e-bike and explore wherever you want in Bagan, whenever you want.

Time to head back to Mandalay 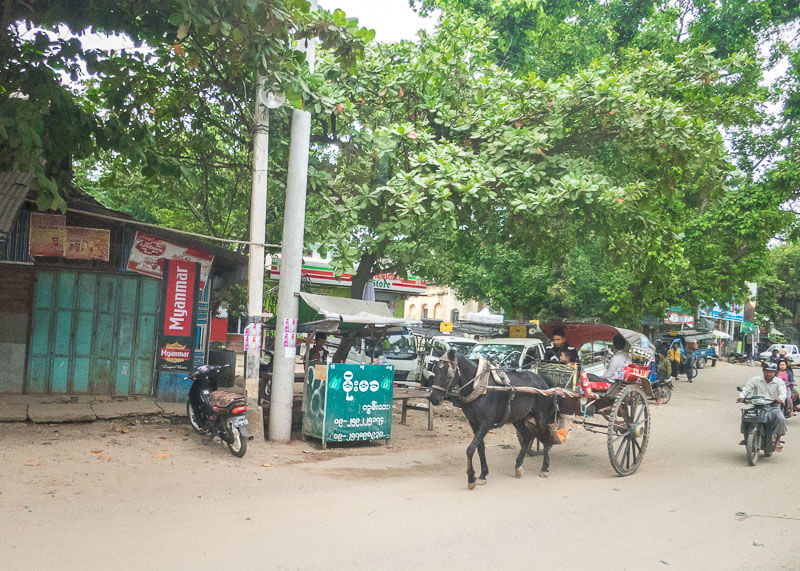 Bye Bagan! Time to head back to the big city!

I was sad to be leaving Bagan, but we needed to go back to Mandalay. Because we were flying to Chiang Mai to Mandalay, we booked another night at Diamonds Inn. 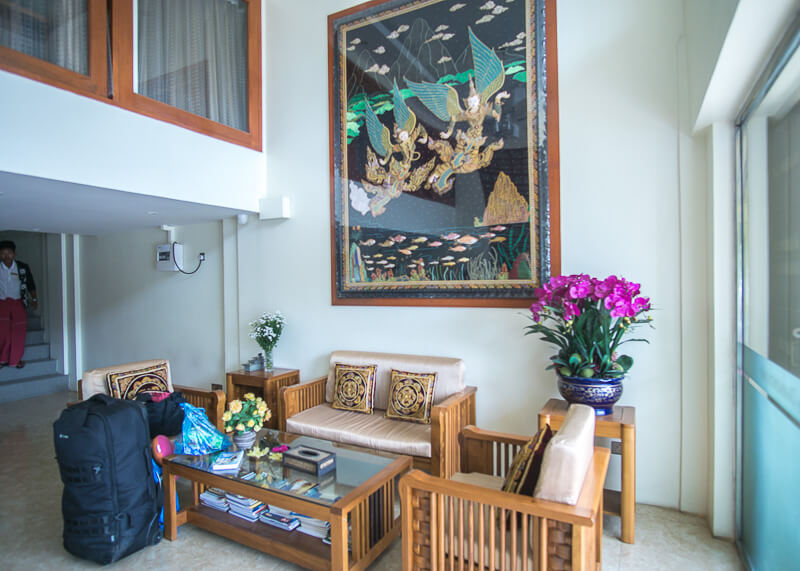 The staff is so incredibly lovely and thoughtful at this hotel. They even noticed that I missed breakfast and gave me a few bananas for me to bring to the airport

Don’t arrive too early at the airport!

Because we are paranoid people (Gary more so than me), we adhere to the standards of arriving at the airport three hours before international departure. We probably got there 3.5 hours before our flight because the traffic was not as bad as expected.

But then we arrived at the airport only to find out that there is a flight delay!

We weren’t allowed inside the airport and had to sit outside to pass the time because passengers can’t check in until two hours before departure. This restriction is likely to maintain order at the airport – they don’t have enough counters to check-in people at the same time.

Because of a two-hour flight delay, we got free access to their lounge 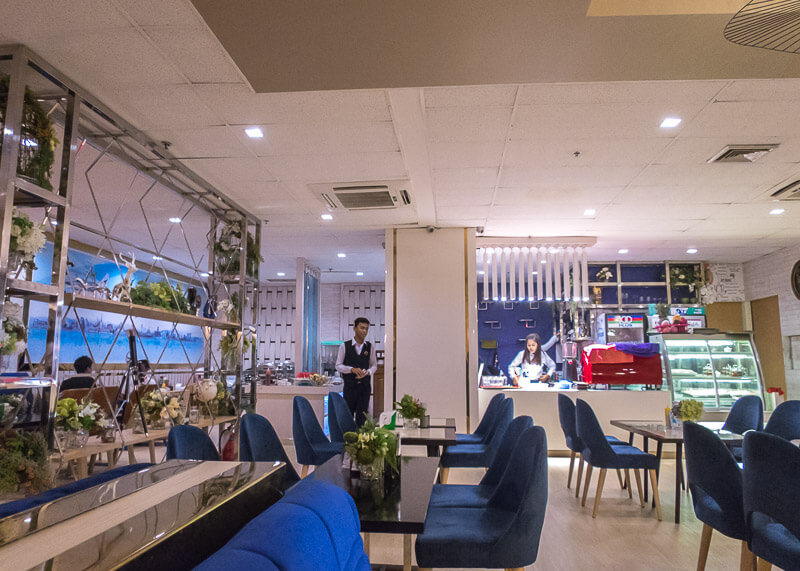 Gary and I (along with other backpackers) were jumping for joy because this was unexpected. We overheard people talking about how impressed they were with the lounge

The free dim sum was delicious until I found a tiny dead cockroach in my food. Ugh. But hey, bugs are everywhere in Asia. You can’t avoid them. I should have eaten some bugs at Bugs Cafe in Cambodia to get over my squeamishness about insects.

Bangkok Airways flew an ancient plane, one with no TV and with wings above the window

The airplane was super old but the service made up for it. The service was excellent and the meal served onboard was tasty.

After a short flight from Mandalay, we were back in Chiang Mai where we rented a beautiful apartment near the old city! I was so excited to finally have a proper kitchen!

Read Next: Settling Down In Chiang Mai 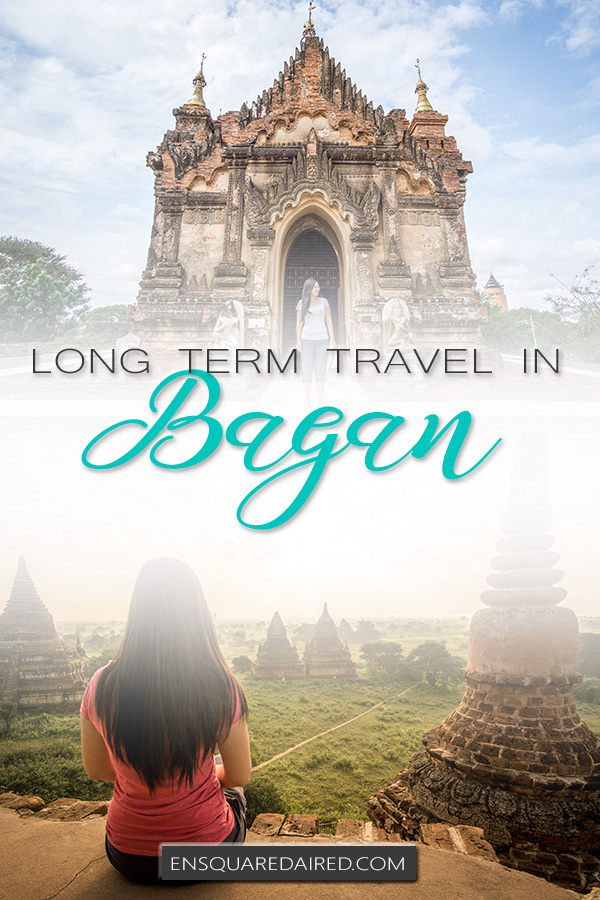