You are here: Home / Travel / Travel To Seoul Korea | The Ultimate Guide For Your Trip 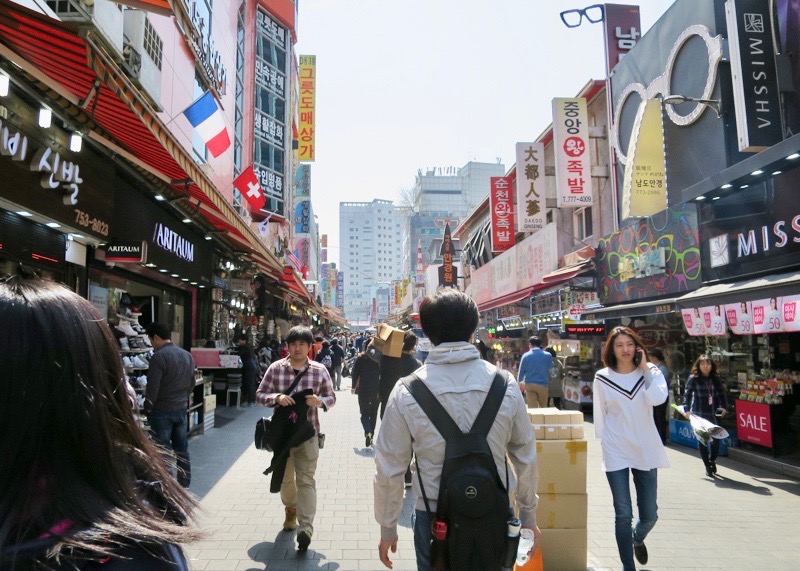 The ultimate guide to read before you travel to Seoul Korea

If you’re visiting Seoul and don’t know where to start, here is a guide for people who either a) have never been to Seoul or b) you’re looking for quick tips and nice-to-know information. I’m a big believer in putting a lot of work into the preplanning, and I’ve tried to summarize everything I know as best as possible in this article.

My guide is useful for just about anyone I listed in the points above.

Seoul might seem tiny on a map but when you visit the city, you will be amazed at the vast population and size of the city. In fact, with a population of over 26 million people, Seoul is the second largest metropolitan area in the world (after Tokyo, of course). If you thought New York City was busy, you are in for a real surprise when you visit Seoul, especially in shopping districts. The capital city itself has a population of 10 million people, making it the fourth largest city in the world.

In recent years, South Korea has been hailed for its technology, automobiles, and the Olympics. Of course, Korean dramas and Korean pop music are enjoyed worldwide. If you love fashion, makeup and skincare, chances are you know that Koreans have some of the best products and styles in the world. If you want to learn more about Seoul and South Korea before your visit, check out this post for a list of great books to read before visiting South Korea.

Read this post: 11 tips for your first trip to Seoul

Their high and low season are as follows:

High season is popular because the weather is not too hot or too cold.

If you end up visiting during the summer, make sure to read this post on how to survive Korea’s hot and humid summers. 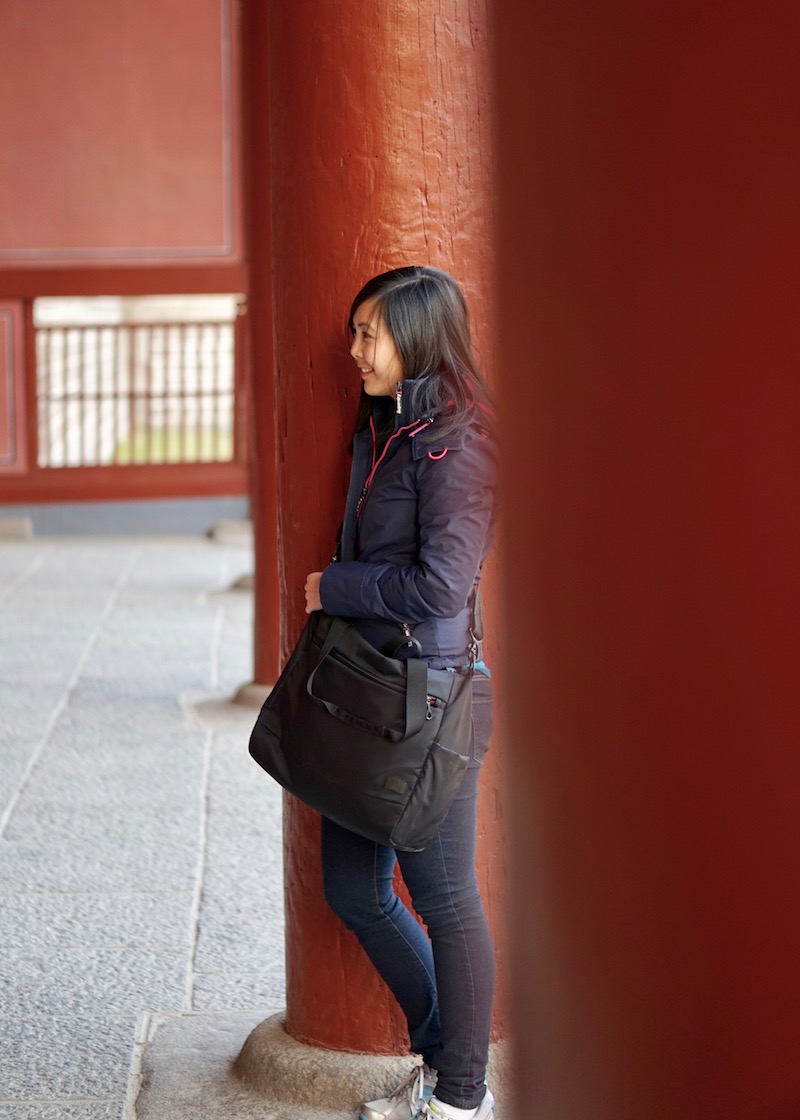 Spring is indeed the perfect time to explore Seoul. All I needed were layers and a light jacket

I personally think there’s never a wrong time to visit Seoul. If you have flexibility in your schedule, consider visiting the low season because it’s a good way to save money.

How to travel to Seoul 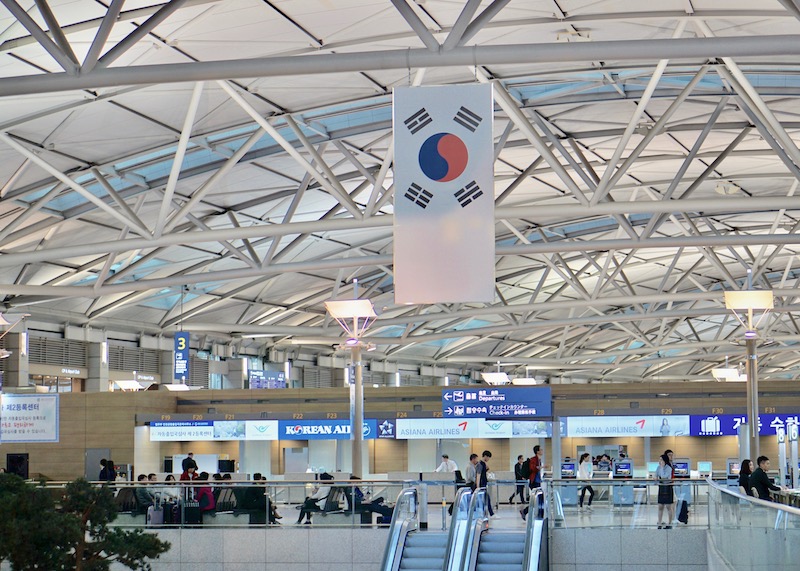 There are various ways to get into Seoul depending where you are coming from. Airplane, train, bus, car and even boat (I did not know that!) are all the different modes of transportation you can use to get to Seoul.

I’m going to assume most readers are international travellers visiting Seoul and will focus on air travel. Although, apparently there is a ferry service from China and Japan.

Once you arrive at the Incheon International Airport

Once you are done picking up your cheap wifi pocket stick from the airport, it’s time to figure out how to get into Seoul.

Assuming you’re not driving to Seoul or you are not taking the ferry, you’ll most likely arrive by plane to the Incheon Airport. There are a few options to get into town:

I highly recommend taking the metro system as the means to get into the city. Not only is their metro system efficient, but it’s convenient, and you don’t have to deal with traffic jams or taxi drivers not understanding what you are trying to say. If you have heavy luggage, try to find the elevators in the metro system because the alternative is dragging your bags up a lot of stairs (or use a luggage service if budget allows!)! There are also certain areas in the metro where you’ll have to walk ten minutes to the metro station. If that’s too much for you, then stick to a taxi or bus. There are also limousine buses that travel to major areas and hotels around the city and is another option to consider.

Door to door, it took G and I about one hour from the airport to the Sheraton D-Cube City hotel, although we budgeted 1.5 hours. Time flew by so fast, and I got a nice nap on our way to our hotel from the airport.

Note: I later learned a better way to get to the city from the airport…don’t be dumb like me and save time by booking the airport express train in advance!

There are a few ways you can get around Seoul:

Metro station is by far the biggest and most convenient way to get around the city since the city is massive. In my experience, it was hard to get around Seoul with English, so I find that the Metro was perfect. The maps were easy to navigate, and the colour coding makes it pretty self-explanatory.

Seoul wasn’t as walkable as I had hoped as some of the areas I wanted to visit were not close in proximity. Regardless, I still ended up doing a fair amount of walking as each station had a lot of different streets and shops to explore. 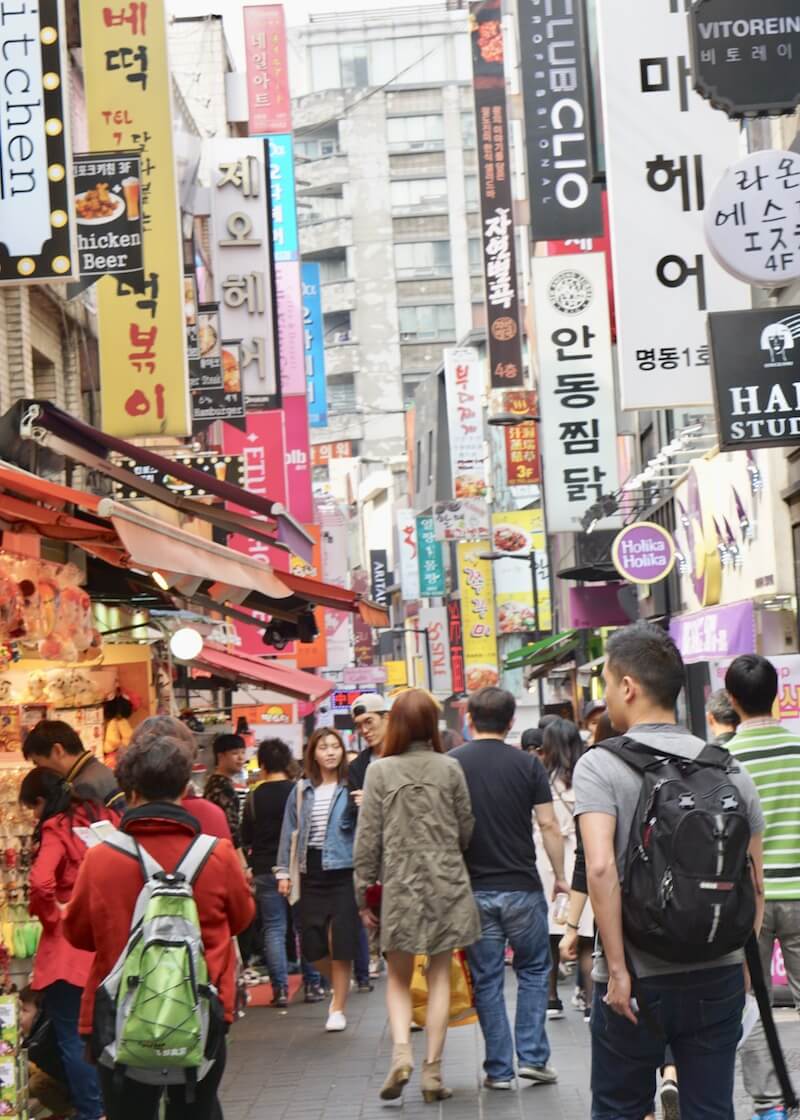 So many streets to walk and explore around Seoul. And EAT!

I didn’t take the bus and taxi but they are another means to get around the city. Buses connect to the subway and can get you almost anywhere in the city. I didn’t want to even try taking the bus because I’d be that incompetent person getting off the wrong stop and wandering around like a lost soul. Taxis are all over the place but so are a gazillion other cars. It seemed like traffic jam was consistent throughout the day. However, if you need to take a taxi, they are ubiquitous and easy to flag down. 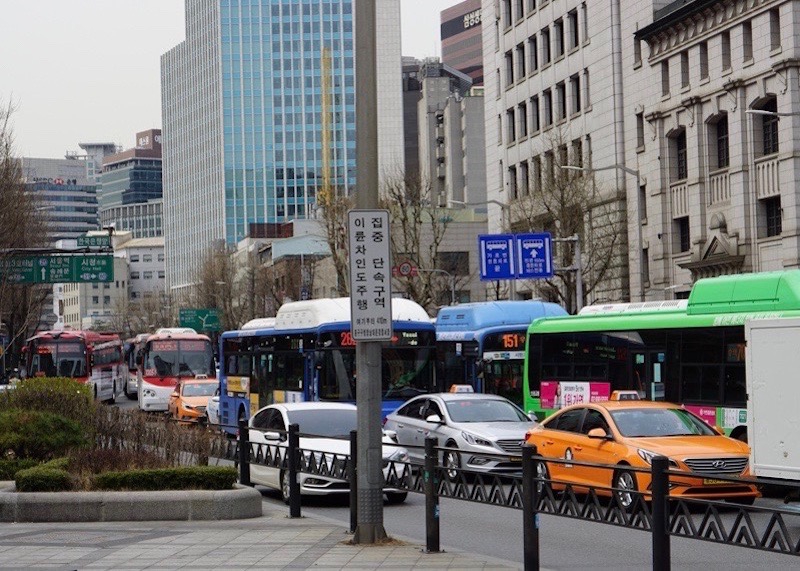 Traffic in Seoul, all day every day

What to do when you travel to Seoul Korea

While my articles are based on my two-day trip to Seoul, I was able to see a lot in those two days. My itinerary can easily be expanded to a four (or more!) day trip. In case you were wondering, I spent 12+ hours of my time outside of my hotel to see as much of the city as possible. My Korean friends were very impressed with all the places I managed to visit in such a short amount of time. 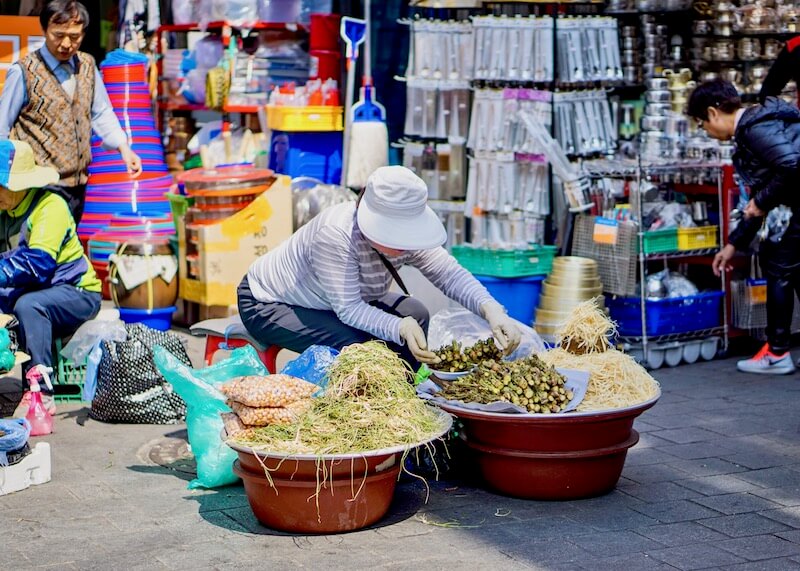 Everywhere you go, every street you turn into has an unusual sight that is uncommon in North America. 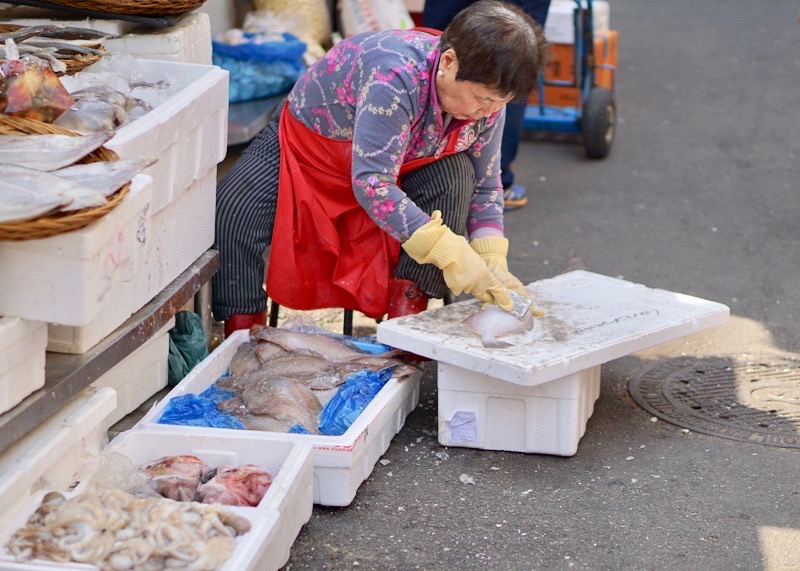 A Korean lady preparing fish on the streets

But again, explore the mountains, the parks, the temples, and shrines! Oh, and did I mention there’s so many cute characters and displays in Seoul?

Read this post: How to find kawaii Korean stationery stores in Seoul

While I don’t shop a lot while travelling (or in general), Seoul is heaven for those who love shopping. There are so many international brands as well as unique Korean fashion, and if you love skincare, you’ll be in heaven. My Asian friends love Korean makeup and skincare and regard them as one of the best products to use.

What to eat when you travel to Seoul Korea 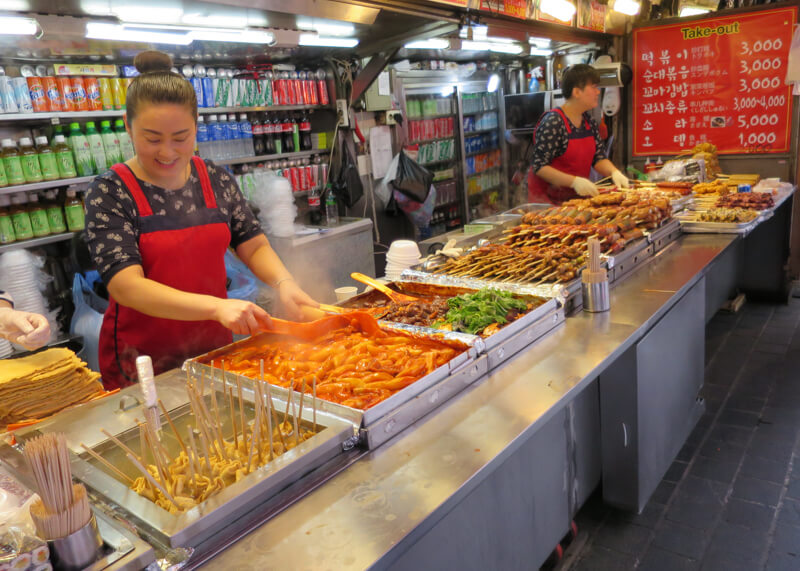 Yummy food everywhere! You will NOT go hungry in Seoul

Seoul has a million things you can eat (ok, maybe not a million but it felt like a million!) and if you love Korean food, you’ll be in foodie heaven for sure. If you’re worried about not getting enough variety, have no fear! I saw many Japanese and Chinese restaurants, as well as international cuisine.

Read this post: 10 yummy eats to try in Seoul

Like any other place in the world, you can spend as much as or little money as you want on food. I tend to go for value – spend as little money on food as possible while not sacrificing on taste and I found food to be relatively inexpensive. Compared to Southeast Asia, food is pricier, but there are so many options for everyone. 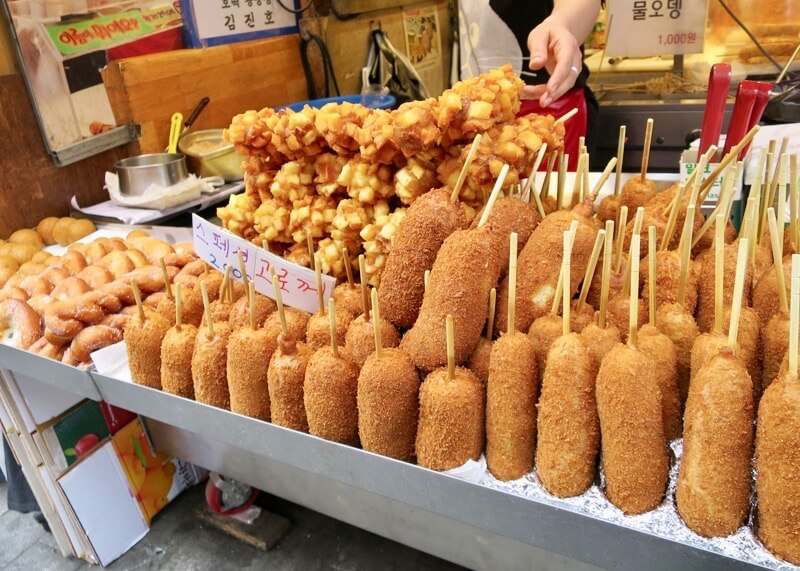 Mmmmmm look at all that street food

We spent around ₩10,000 (around $12 CAD or $8 USD) per meal, per person on our trip and I’m pretty sure we both left Seoul a pound or two heavier. Mind you, we barely ate in restaurants and stuck to street food most of the time.

If you’re staying on a super duper low budget, don’t forget to visit convenience stores and bakery stores! You can find a delicious bakery for as low as ₩1,500 ($2 CAD or $1.50 USD), as well as snacks and yummy drinks. 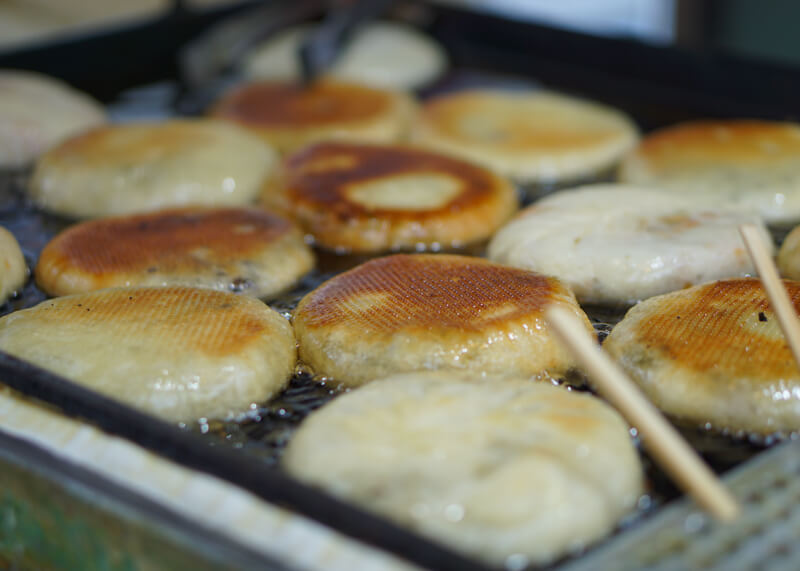 As for drinks and coffee, I don’t drink either (I know, what planet am I from) so you’ll have to check out another guide for tips.

Where to stay when you travel to Seoul Korea

Seoul is a place where accommodations are a bit more expensive compared to Asian cities. Again, like food, you’ll find accommodation that fits your budget. Look out for deals on Booking.com or Agoda, which is the best place to start.

As for location, if you’re not too sure where the ideal place to stay is, anywhere along the Metro is your best bet.

Read this post: 10 places to check out in Seoul

After doing tons of research and trying to figure out the best combination of price and points, we stayed at the Sheraton D-Cube hotel. 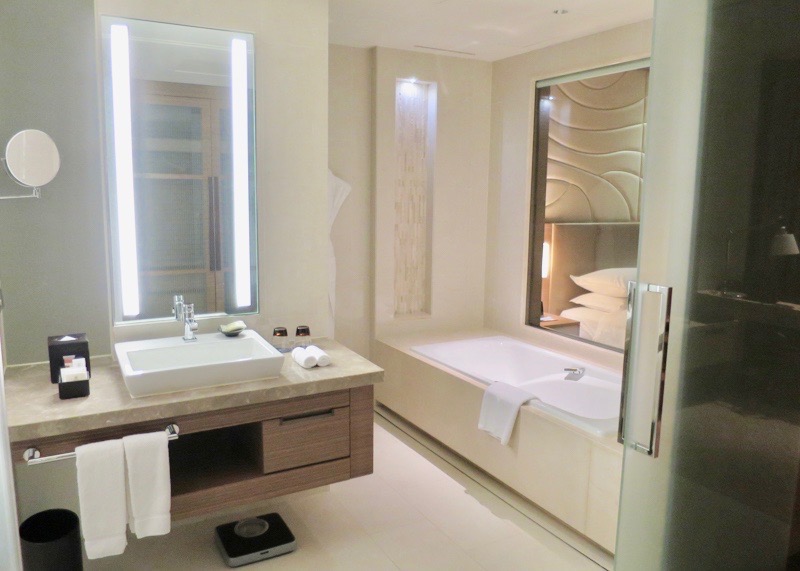 Beautiful rooms at the Sheraton D-Cube hotel, where you can brush your teeth, shower, bathe AND spy on your travel companion in the next room

Safety for when you travel to Seoul Korea

I wrote about safety in my previous article, so I won’t rehash it here. To quickly summarize though, Seoul is a very safe city, comparable to Hong Kong (and maybe Japan?), and Seoul is fine to travel alone. I didn’t feel the need to worry about petty crime or people stealing from me because honestly, I’m sure most of them were wealthier than me. My level of awareness didn’t need to be in overdrive like it normally is when travelling outside of North America and I never felt like I was being scammed. Of course, even though this was my personal experience, you should always be careful and be aware of your surroundings.

Stay healthy when you travel to Seoul Korea

No need to worry about dirty water or contaminated food, Seoul is relatively clean. I don’t think Seoul belly exists (except for a BIG Seoul belly from all the good food you’ll eat by the time you leave Seoul!). 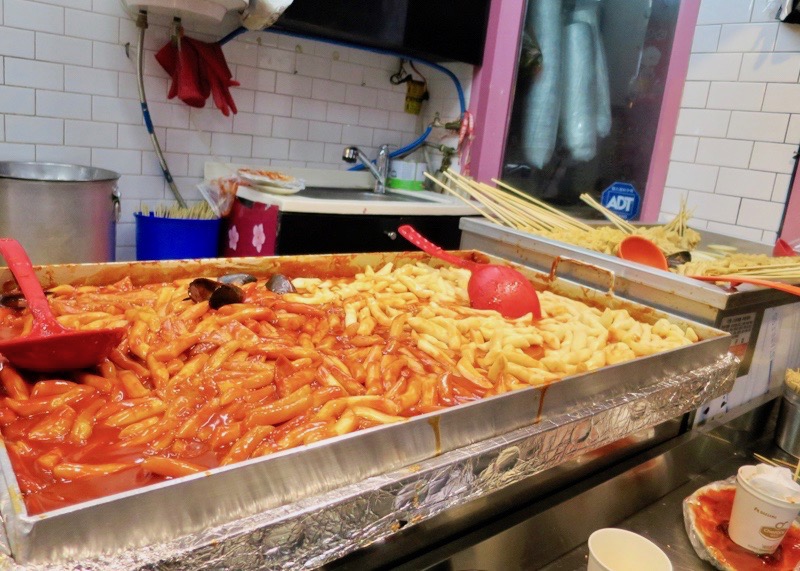 Hurray for being able to eat street food on your first day and not get sick! 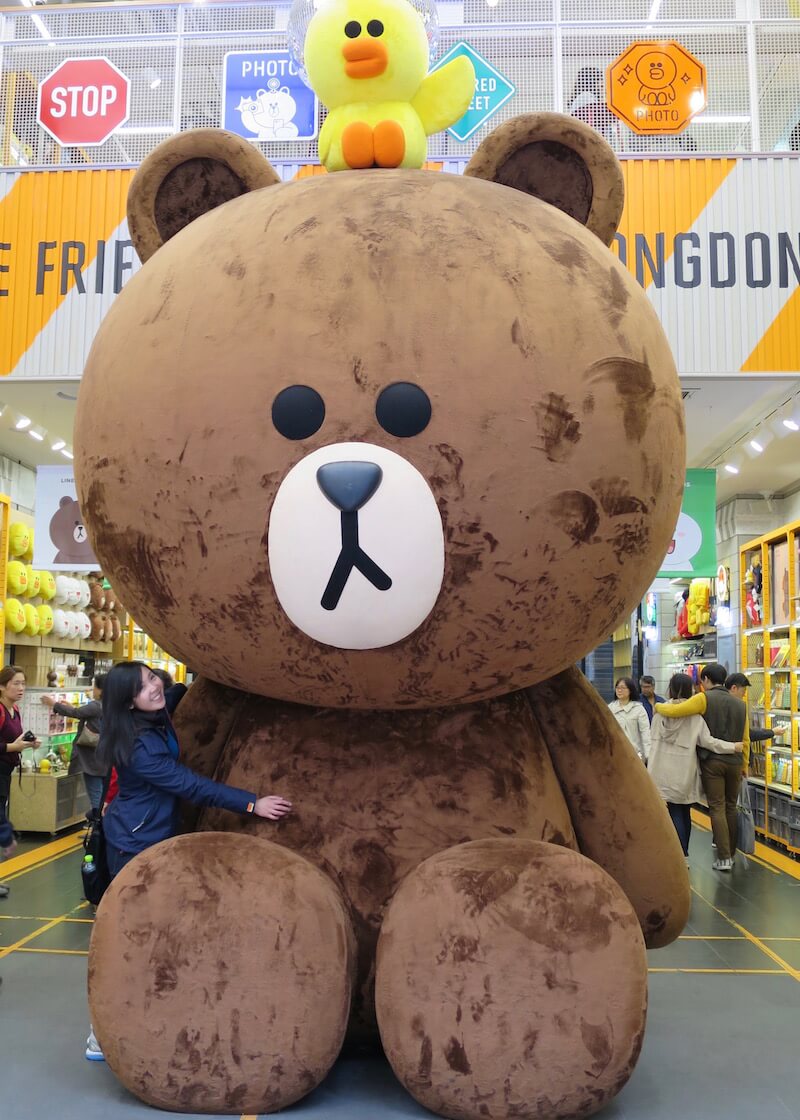 Other great destinations in South Korea

While Seoul is great, there are other great places to visit around South Korea that you will want to consider for your trip! Nami Island day tour is a great place to visit year-round and is just 65 km from Seoul, making it an easy day trip from Seoul. As well, visiting the second largest city in South Korea is a must as there are lots of things to do in Busan!

There you have it, my practical guide for your trip to Seoul. If you have any questions, please leave a message at the bottom of this post. 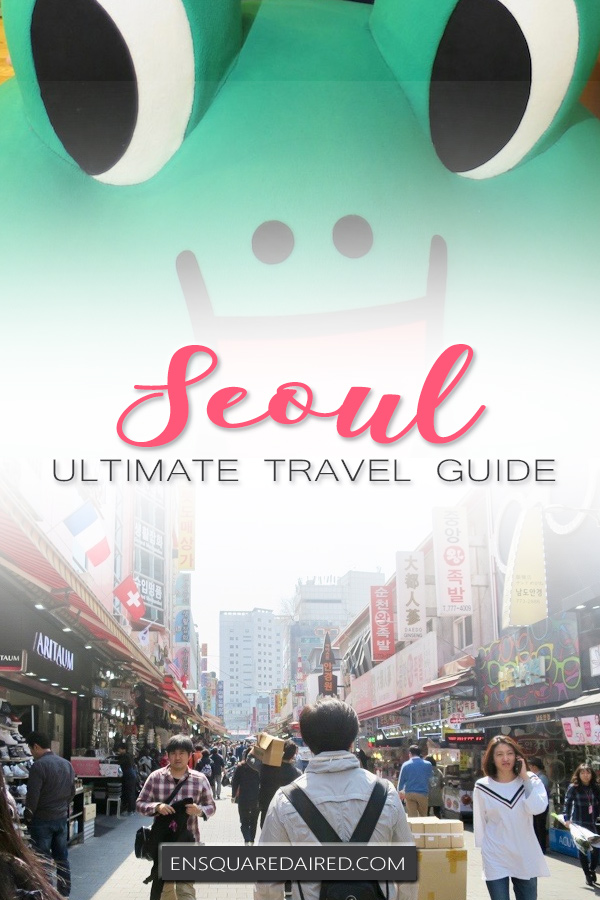 The Best Things To Do In Singapore For First Timers

The Best Things To Do In Singapore For First Timers