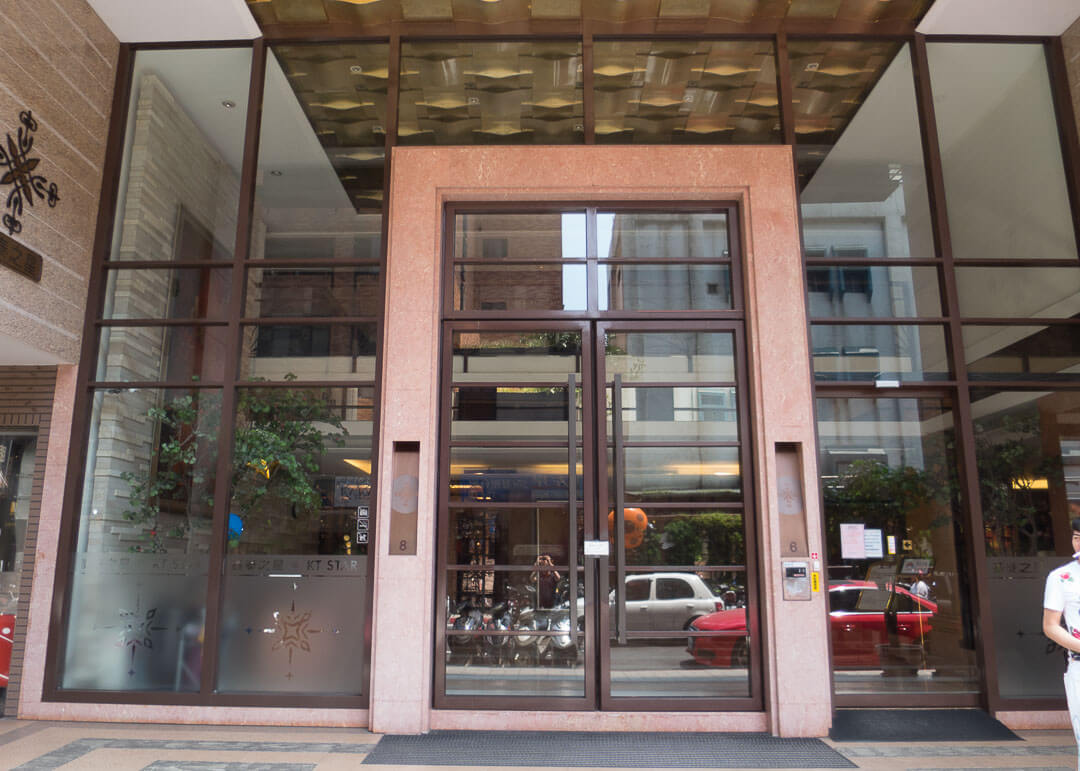 During our year of travelling, we planned on spending three months in Taiwan. That meant we were looking for a serviced apartment, like the one we stayed at when we were living in Thailand. The plan was to do our research in advance before arriving in Taipei and then stay in a hotel while looking for an apartment.

We soon learned is that it is not easy to find a serviced apartment in Taipei compared to Thailand. There are a lot of illegal apartments in the city, and it was tough to distinguish what’s legal and what’s not. It didn’t help that the contracts were all in Chinese as well, and neither G and I know Mandarin (yes, I signed an agreement, and I didn’t even know what it said for the first time in my life!).

After spending time looking at a few apartments in Taipei, we decided to go with Kee Tai Star Apartments.

We chose the smallest room, which was around 300 square feet. Our room number was 11B01. 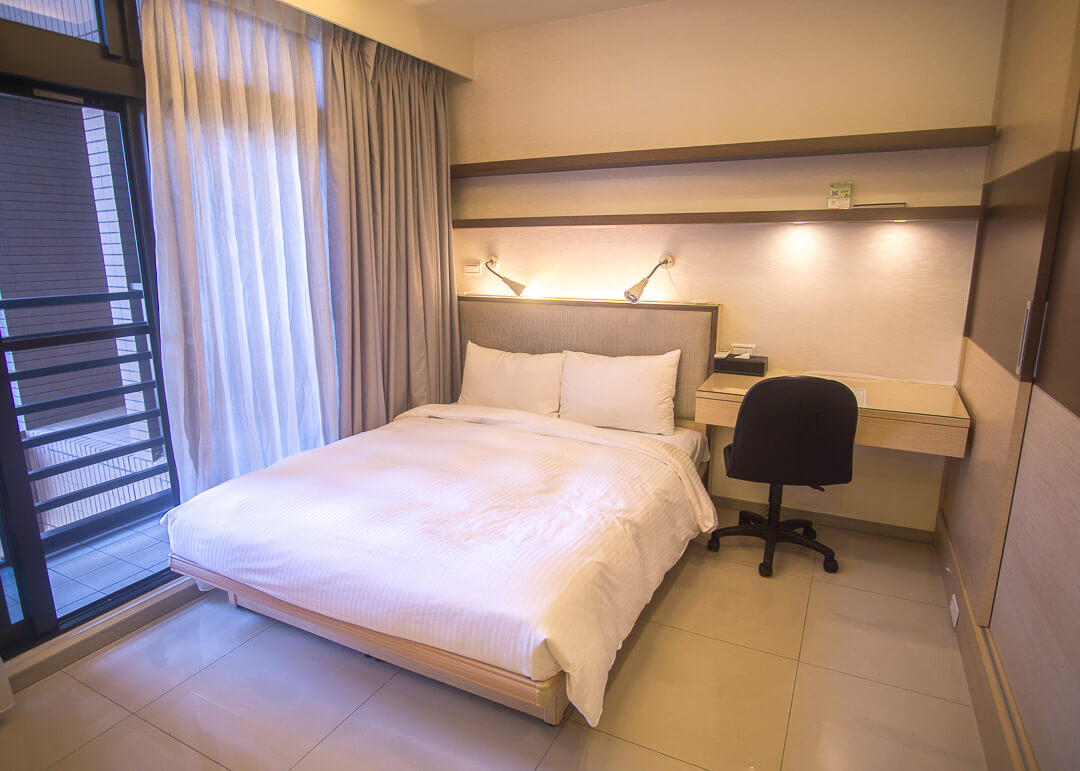 The bed and desk 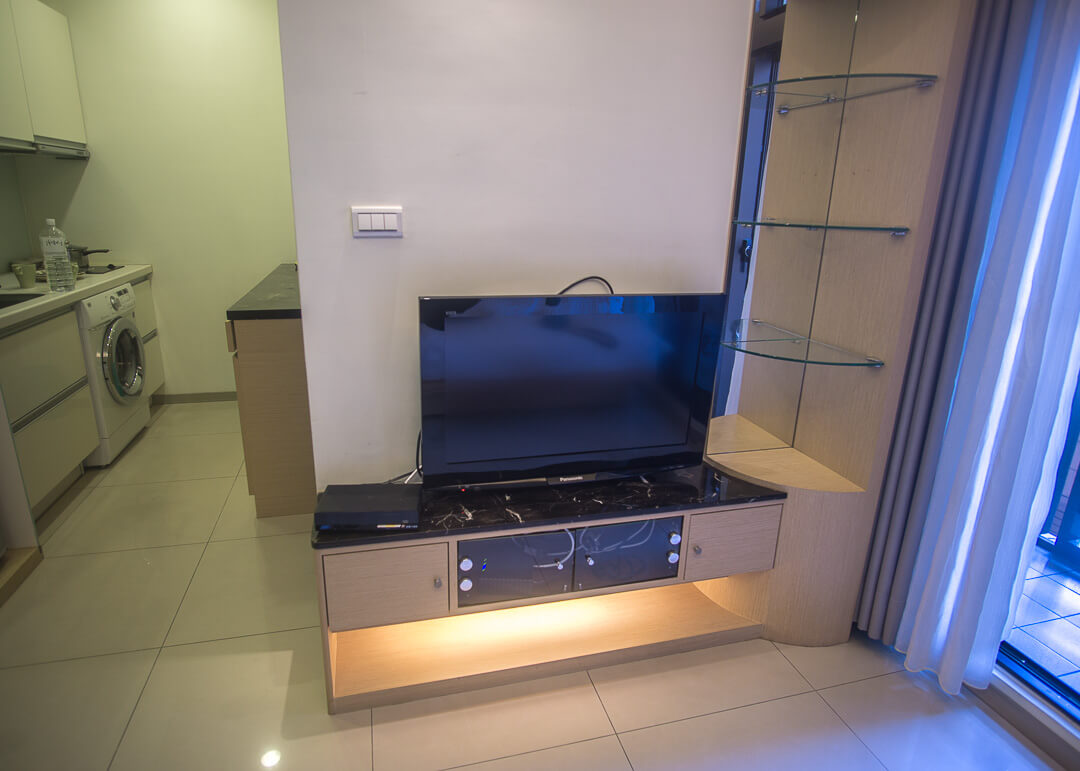 Our room had a TV with internet included in our price

Electricity was charged at 5NTD/KWhr

There was also a laundry machine and a firm bed. There was a clothing rack which we would place outside to dry our clothes. Hanging your clothes to dry is actually common practice in Taiwan as opposed to using a dryer. In fact, that is something I do as well back in Toronto. I find my clothes end up lasting longer when it doesn’t go through the dryer.

Our room also had A/C, which we tried not to turn on so often to save on electricity.

There was a lot of natural lighting and big windows that entered this room, making it very bright during the daytime. I had issues sleeping here for a month because it would get so bright by 5 am. Part of it was also because something tragic happened while I was away. Still, most of my insomnia was because of the sunlight coming through the windows. I swear, there was a good month where I only slept three hours a night because of the curtains. I was a living zombie for almost a month.

The beds are firm, and it felt like I was sleeping on the ground on a thin mattress

The problem with my sleep, though, is that the bed is too small for both of us and the curtains are not dark enough. In Taiwan, the sun seems to rise at 5 am so lots of light gets into the room early in the morning!

There were lots of storage spaces for us, and we even unpacked our stuff to make ourselves a bit more comfortable in this apartment. 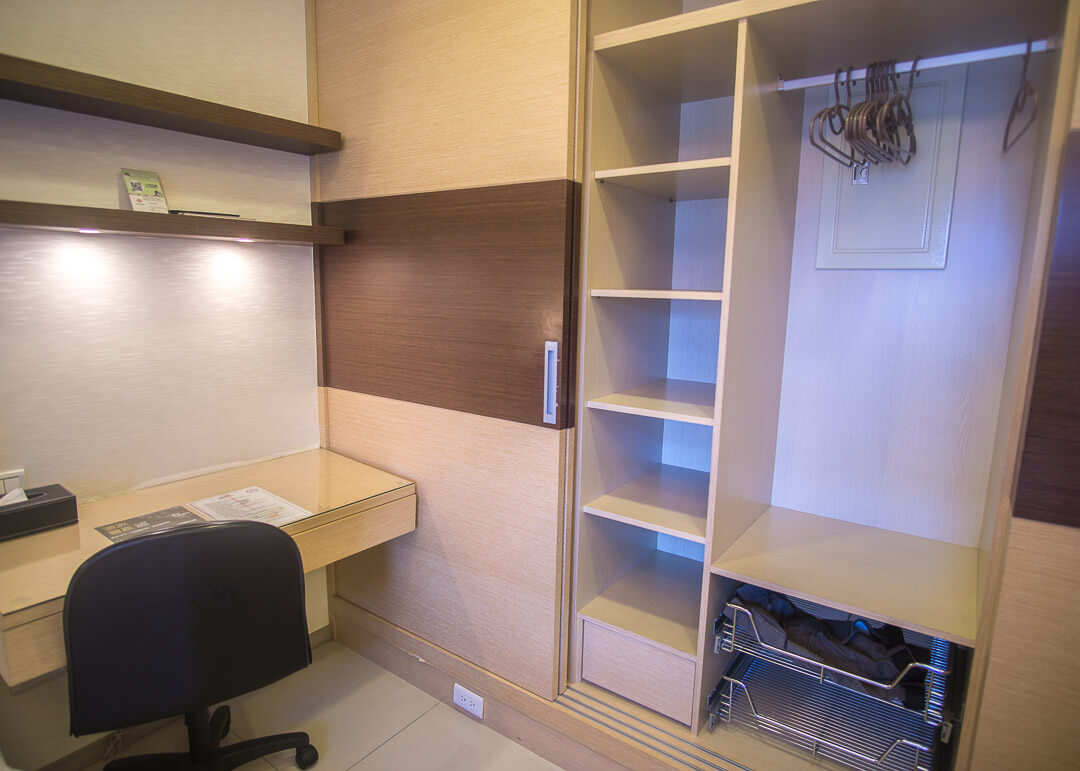 We had lots of closet space in this apartment. Our room also had a mini desk and chair, which was quite comfortable to work

The lock on the door at Kee Tai Star apartment Taipei The doors are pretty modern in that we used a FOB to enter. There is also a passcode we can enter in case the FOB doesn’t work, but to be honest, I didn’t remember the passcode for the door. There is also a chain lock on the door which gave that extra level of security.

The bathroom was a typical one, large and spacious. Our kitchenette was functional in that we had a hot plate to warm up our meals or cook noodles once in a while. There was also a fridge and microwave in our unit, making it convenient to store food and reheat meals. We never cooked in Taiwan because there really isn’t a need. We found an excellent place to eat, and that’s where we went to eat at most times. 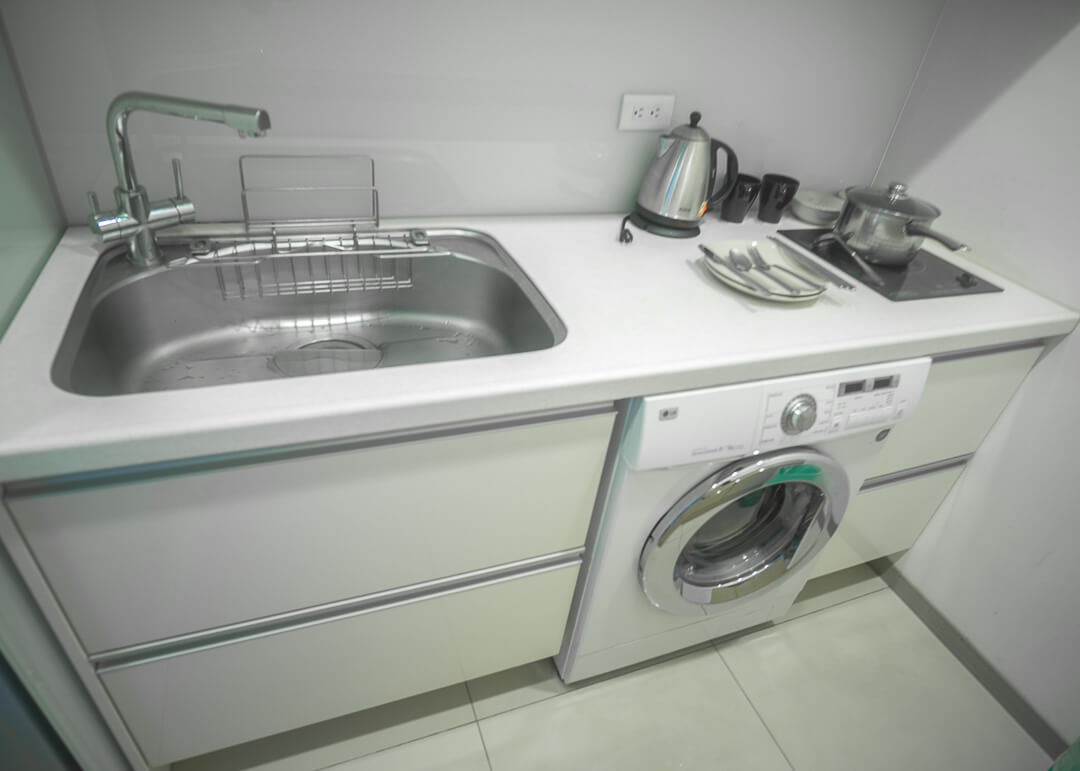 Our kitchen and laundry machine

The only thing we needed to buy was the laundry detergent.

As for bugs, they did fly into the room every so often, but it wasn’t so bad. I was worried about ants, but we were fine because we were on such a high floor.

Barely ever heard my neighbours. Every so often, I did hear the door to their room slam, but it was few and far between. 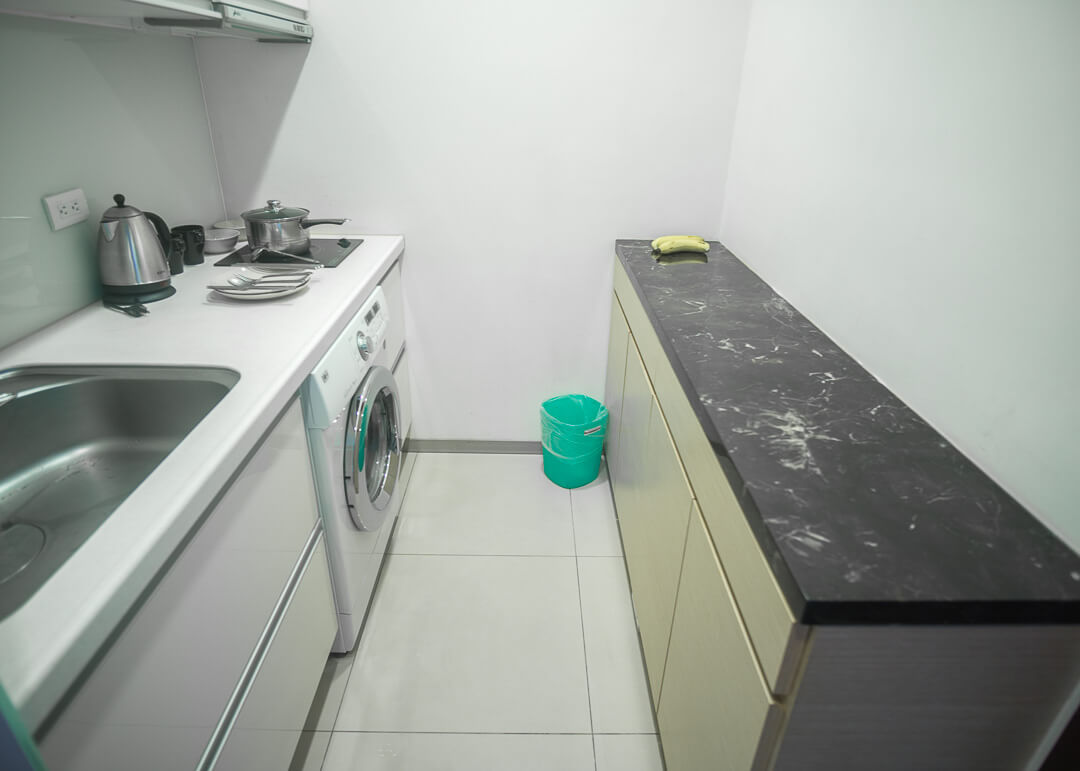 Another view of the kitchen

The service was KT star was incredible from day one. On our second day in Taipei, we visited the leasing center and toured some of the apartments.

One thing we noticed is that pricing is inconsistent depending on where you looked. For example, there was a promotion on their website to save 3000 NTD per month, but that was not mentioned to us at all. We showed them the promotion, and they agreed to give us a discount.

Their services were very professional and they communicated well in English

I used Line to communicate with the management company, and they were very responsive. Their work hours are from 10-7 from Monday to Saturday and 11-7 on Sunday, so we often had access to someone.

One issue we had was that we wanted to travel around Taiwan but did not want to carry our large suitcase. Fortunately, we were able to go with the carry-on and leave the large bag with them. That makes it so much easier to tour Taiwan without having to carry everything.

Signing a contract in Chinese

When it comes to signing contracts, I usually read the details in case I was signing my life away. It was a bit nerve-wracking to sign an agreement that was entirely in Chinese (I can’t read Chinese). Fortunately, they let us take a photo of the contract, and we sent it to friends who could read Chinese to make sure there wasn’t any weird clause in the contract.

When it came to cleaning and having toiletries and towels changed, we would get one cleaning a week. The process to request cleaning was quite easy – we would leave our keys and a card at the front desk each morning before we left the condo. By the time we returned in the evening, our room would be cleaned and toiletries restocked.

Housekeeping was incredible, one of the best experiences I’ve ever had in a serviced apartment. I am a clean freak and rarely find any housekeeping to meet my expectations. Kee Tai is an exception. It seems like they do a deep cleaning of our condo each time they come to clean the place. Every little corner of the apartment was left spotless.

A great thing about this apartment is that it was within walking distance to two subway stations. Zhongshan is in the middle of Taipei, so we were able to get to many areas within 30 minutes on the MRT.

There is a Family Mart downstairs, the bus stop and MRT stations are all within a short ten-minute walk. A night market and morning market is also nearby, along with tons of restaurants. Of course, tons of bubble tea shops surrounded us. There is also a Starbucks around the corner, which we often stayed to catch up on bills and errands.

The location is also very safe. The area has a mix of residential buildings and shops with lots of foot traffic. 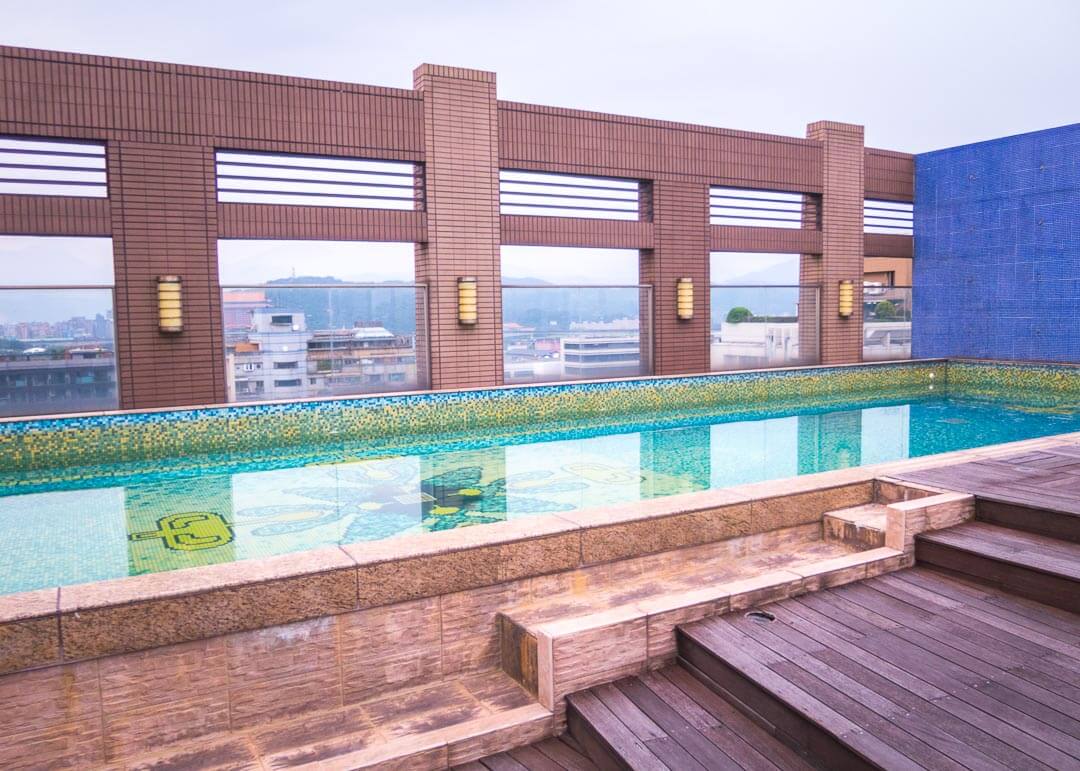 Aside from the pool, there aren’t many amenities in the apartment. We never used the pool, but it is available for rental in the summer for 100 NTD for the whole day.

The lobby is always blasting with really cold AC, which is a great and welcoming feeling. The lobby is huge, and they have a reception desk with people who can speak decent English. 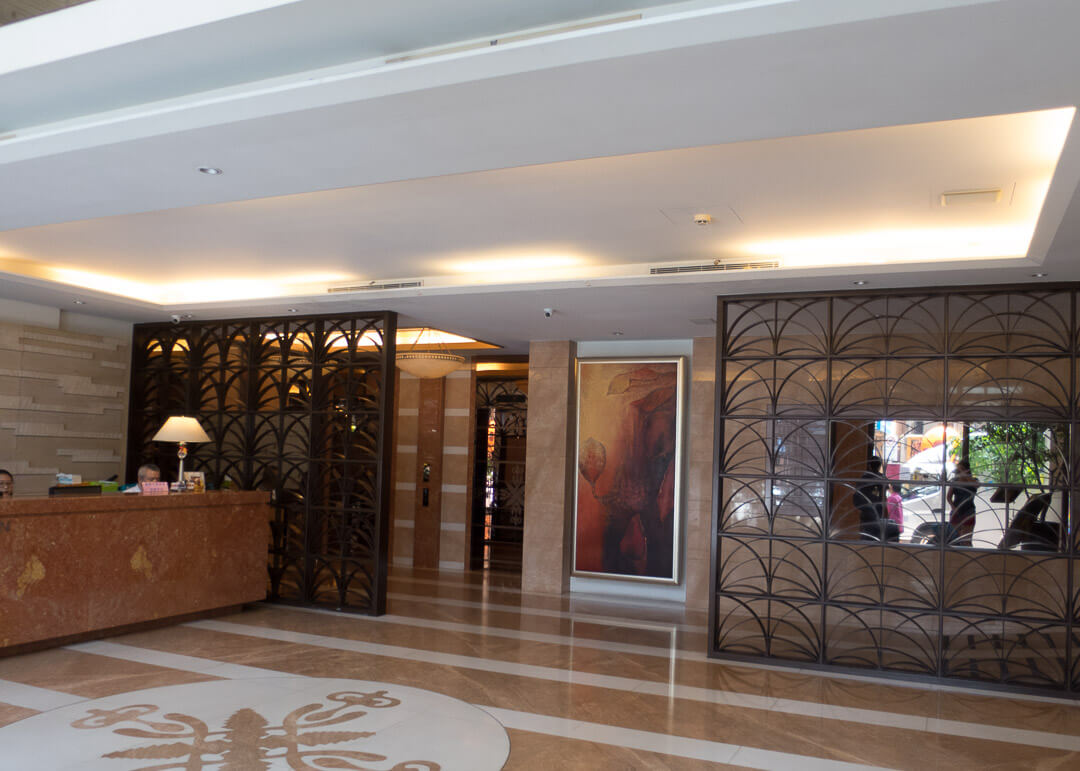 This apartment had a large and spacious lobby

Aloft Taipei Zhongshan | A Comprehensive Review Of This Hotel

A Very Hospitable Stay At The Best Western Dunedin NZ

Aloft Taipei Zhongshan | A Comprehensive Review Of This Hotel

A Very Hospitable Stay At The Best Western Dunedin NZ