You are here: Home / Travel / Aloft Taipei Zhongshan | A Comprehensive Review Of This Hotel 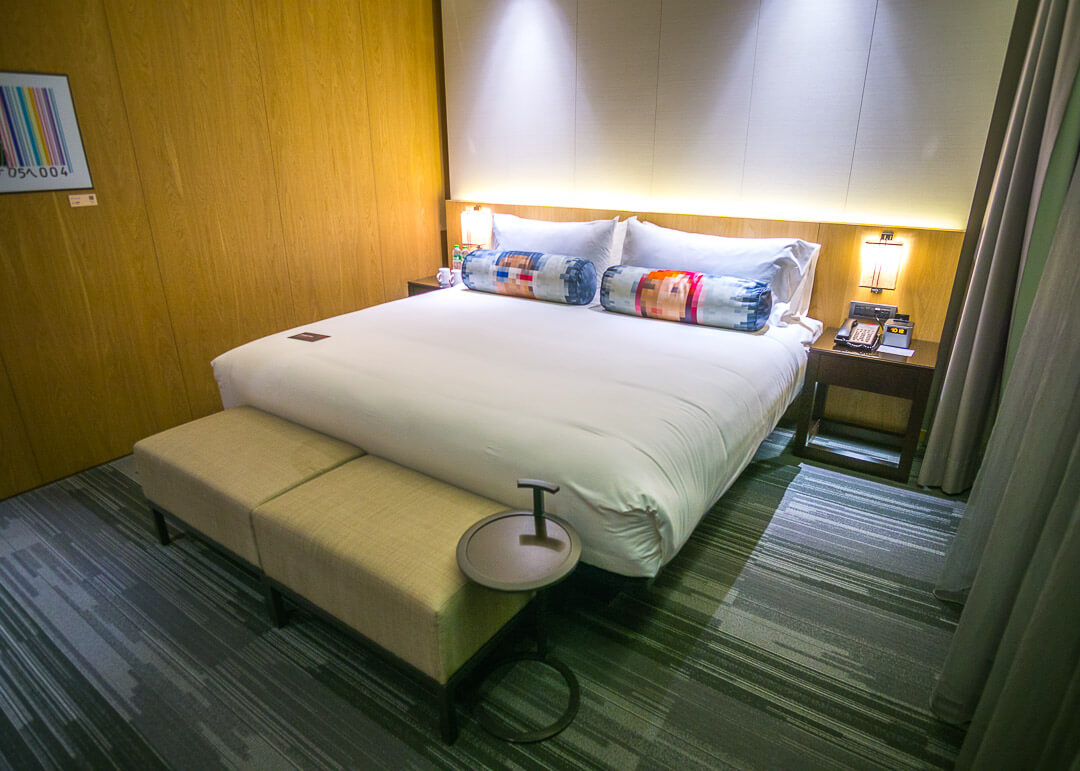 During our year of travel, we planned to stay in Taiwan for three months. We struggled to find accommodations online and decided to stay in a hotel for a few weeks while looking for an apartment. We chose the Aloft Taipei Zhongshan based on location, points redemption and service.

If you are visiting Taipei and you are looking for a modern hotel in a convenient location, then this review is for you. This review might be the best you’ll find about this place since I stayed here for a total of three weeks while in Taiwan. If you’re still unsure if Zhongshan is right for you, check out this guide that has a detailed neighbourhood guide of where to stay in Taipei.

The ambiance of the Aloft Taipei Zhongshan 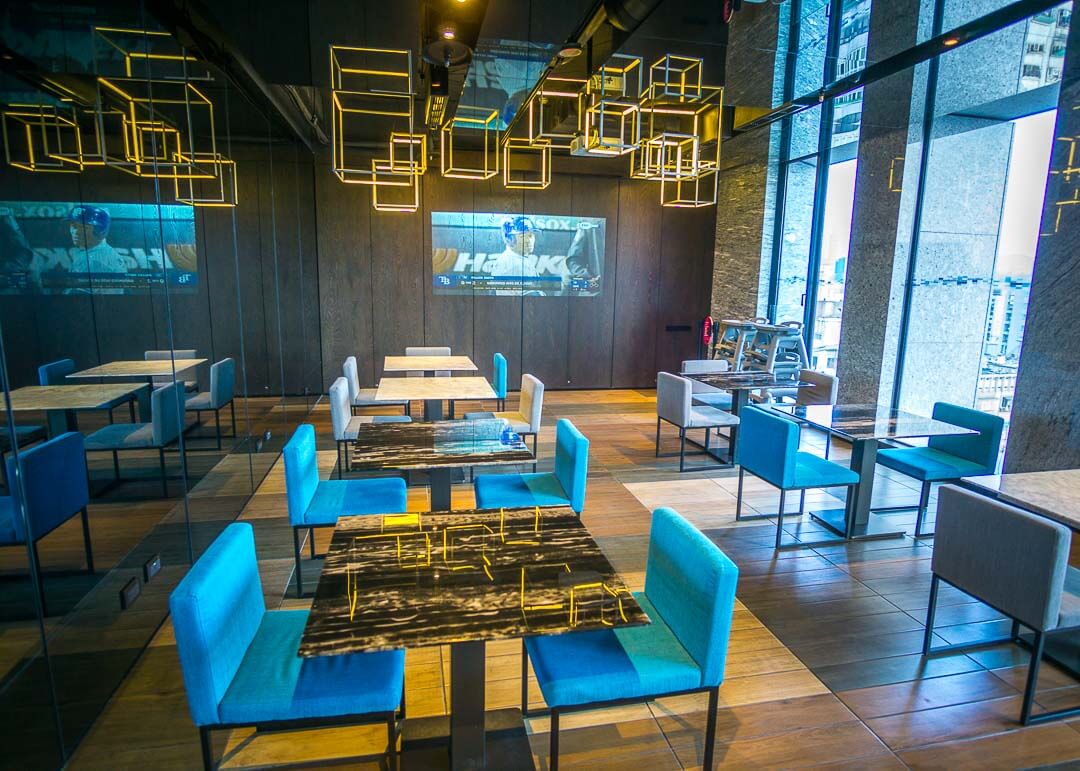 This hotel has a hip and modern feel. There is lively décor and a rooftop pool that was unfortunately closed during our visit. It honestly felt like any other Aloft hotel we’ve visited except that the lobby is quite small.

The room at Aloft Taipei Zhongshan 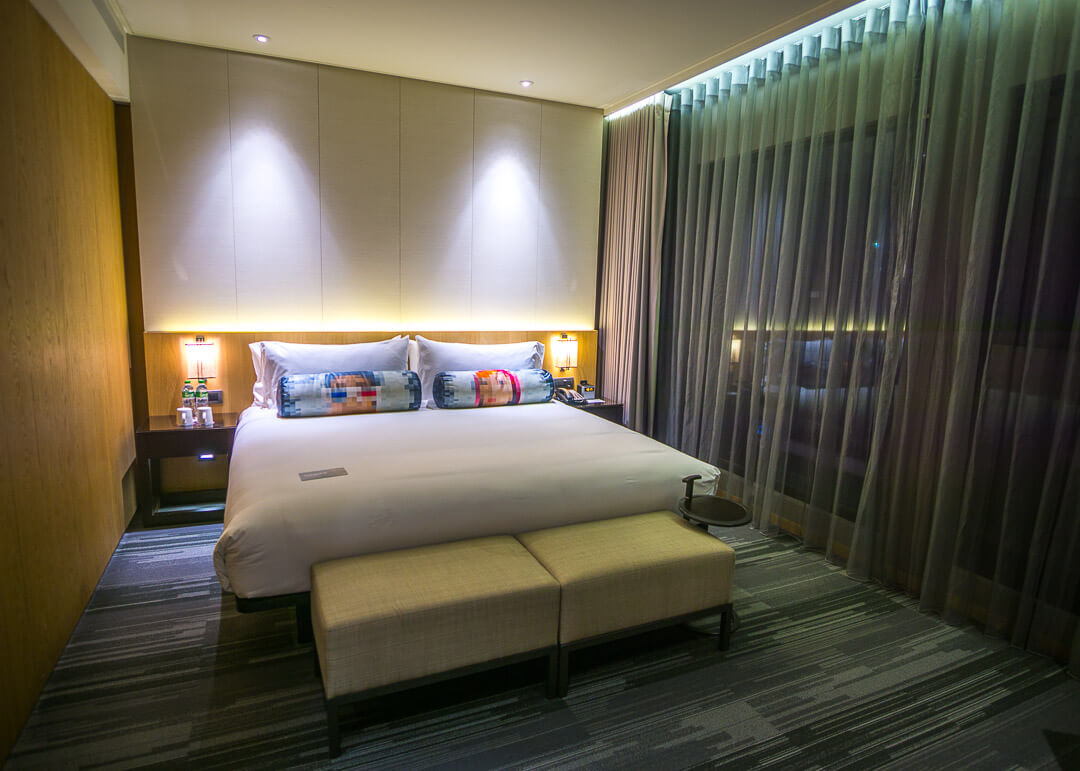 We received an upgrade to the Breezy Room, a spacious 377 square foot room on a high floor. The bed was super plush and the bathroom is very spacious. You can take a bath with a view! Or use the shower on the right 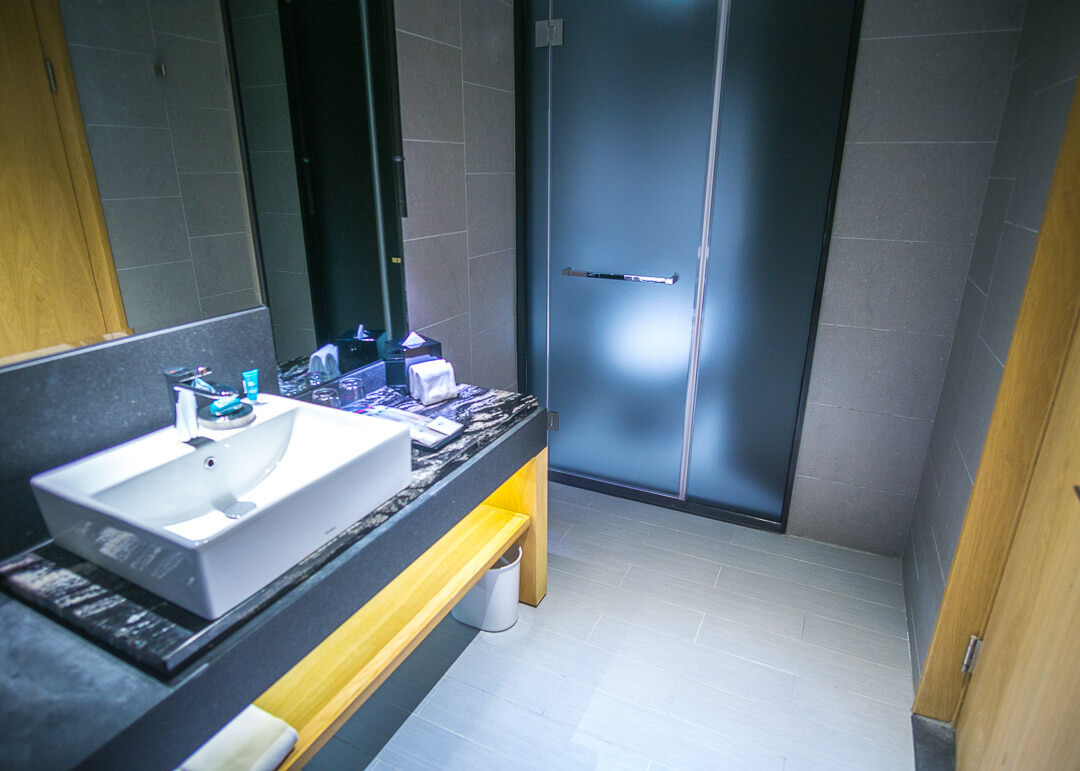 The toilet is in a private room. It’s a Japanese toilet for those who are wondering

There’s the typical TV, mini fridge and a desk. 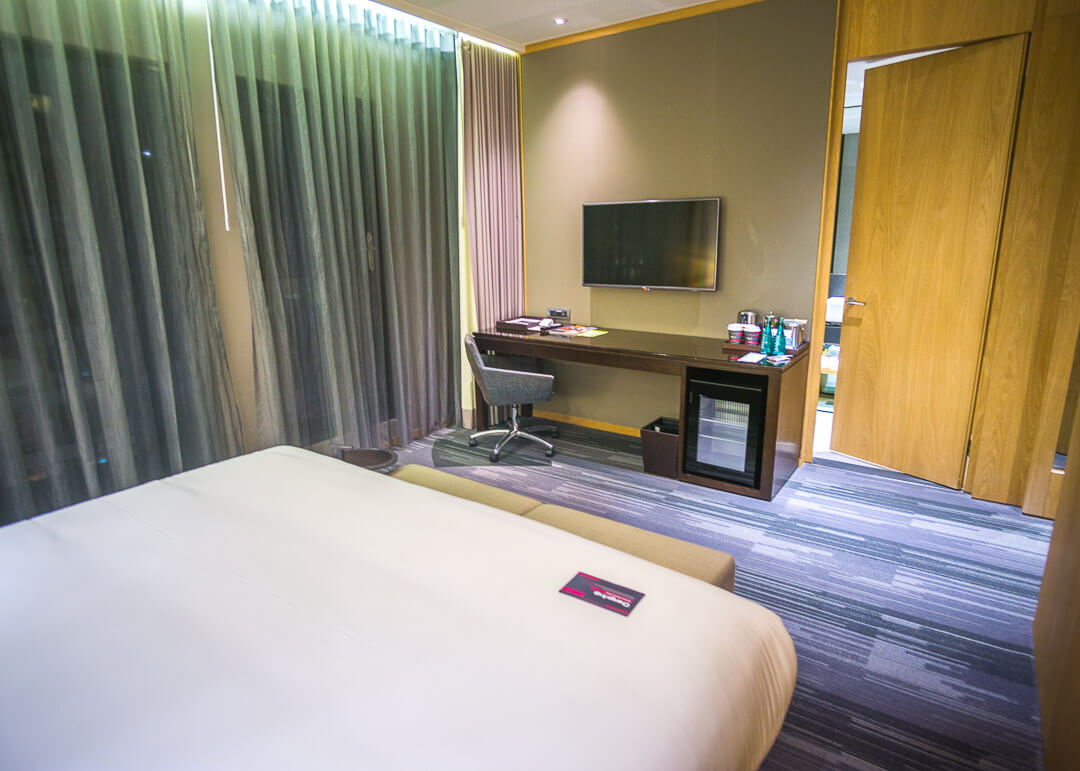 The desk next to the windows

The one big problem with our room …

The only issue was that there was this musty hotel smell that would not go away! Since there are no windows in the room, the smell gets trapped and becomes super strong when you first enter the place.

After checking into the room, I felt like the smell was unbearable and called reception to ask for a room change. Sadly, the hotel was fully booked and they could only offer to bring a humidifier to lessen the odour. That helped because by morning, the smell was mild and I really didn’t want to deal with moving to another room. But I was still concerned about the smell so I called again the next morning.

The next day, I asked for a room cleaning and if the housekeeper could leave on the humidifier. The front desk offered to put in a deep cleaning request and offered to arrange another room in case I didn’t find it satisfactory when I came back. I said it is fine, no need for but the front desk still insisted!

Fortunately, all was ok afterward. I learned that the smell gets nauseatingly worse when the power is off, and there is no ventilation running. I dealt with this problem by making sure the humidifier was on at all times. 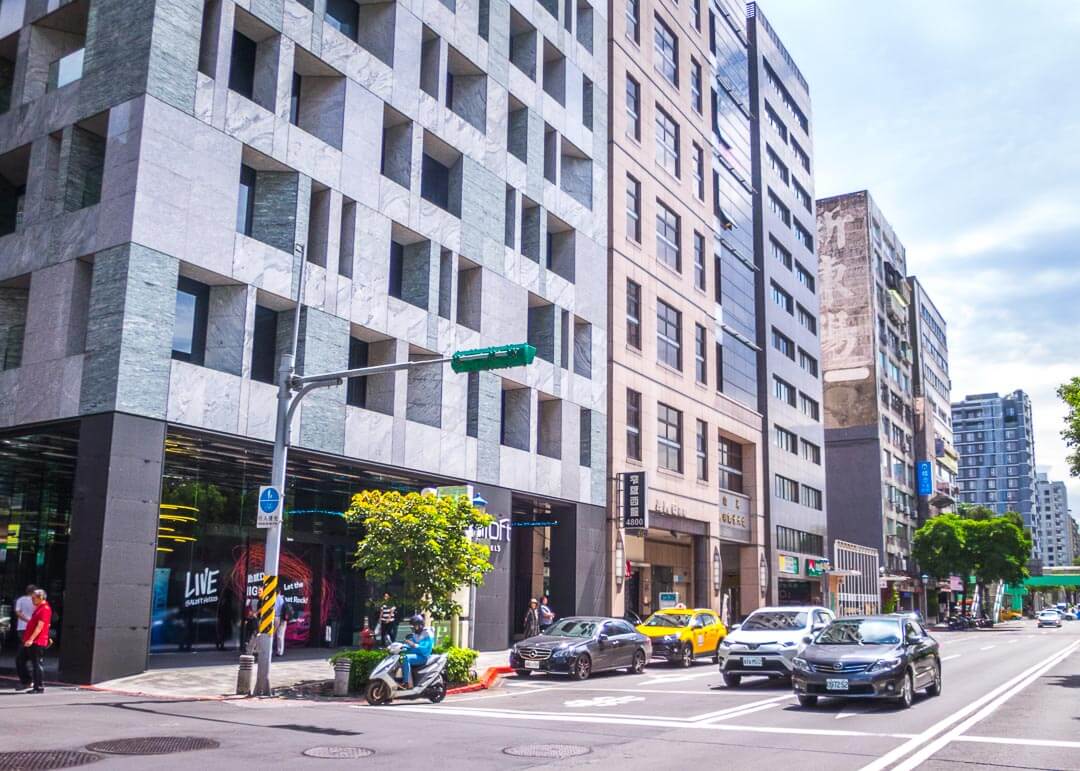 The hotel faces the main road that gets very busy at night. Think, Hanoi level busy!

One thing that concerned me about this hotel is the noise level since I read that the hotel is quite noisy. Luckily, another platinum member gave me a tip to ask for a higher floor that is not facing the main road. That worked well for us because we did not hear much traffic noise during our stay. Every so often, I’d hear a door slam from my neighbour but it was very rare and didn’t happen during odd hours.

The service at Aloft Taipei Zhongshan 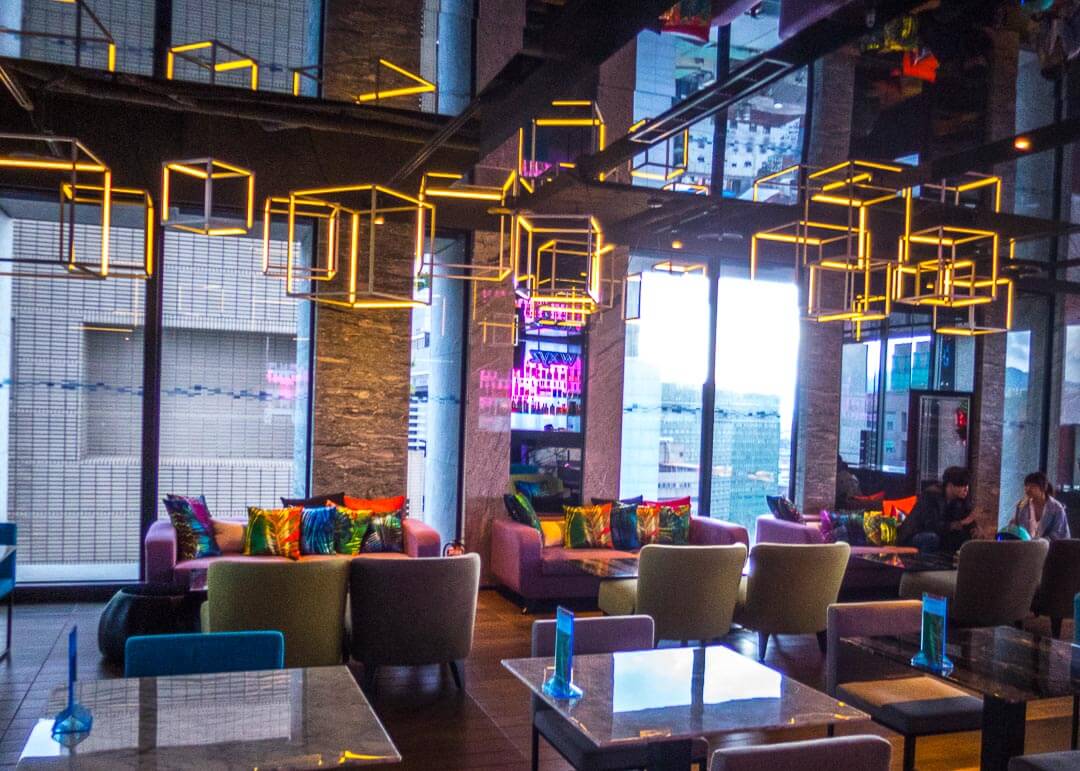 The service was great even at the W XYZ bar

Ok, so you won’t be greeted with super enthusiastic people and the front desk staff always look like they are super stressed. But, as you have read from my experience, they deliver when you need them.

When we first arrived at the room, I was hit with what smelled like cigarette smoke mixed with new hotel smell. Imagine my crankiness when we spent all day travelling from Japan (starting at 5 am!) and had full expectations to pass out, only to feel suffocated by the stinky smell.

I called reception and asked if I could move to another room. Since the hotel was fully booked, the staff member brought me a humidifier and said she can arrange to move me tomorrow which worked fine.

We then had a light bulb go off in our bathroom in the toilet area. We asked if someone could look at it, fully expecting that we would need to wait until tomorrow because it was already late. The front desk indeed confirmed that the staff isn’t available and offered to move us to another room for the inconvenience. Of course, it was not necessary and nice of them

Because we were platinum members, we received coupons to redeem free drinks

No free breakfast here for platinum members, unfortunately. We usually got hot chocolate or latte, but I found it weird that they only filled it to half the cup.

The location of Aloft Taipei Zhongshan 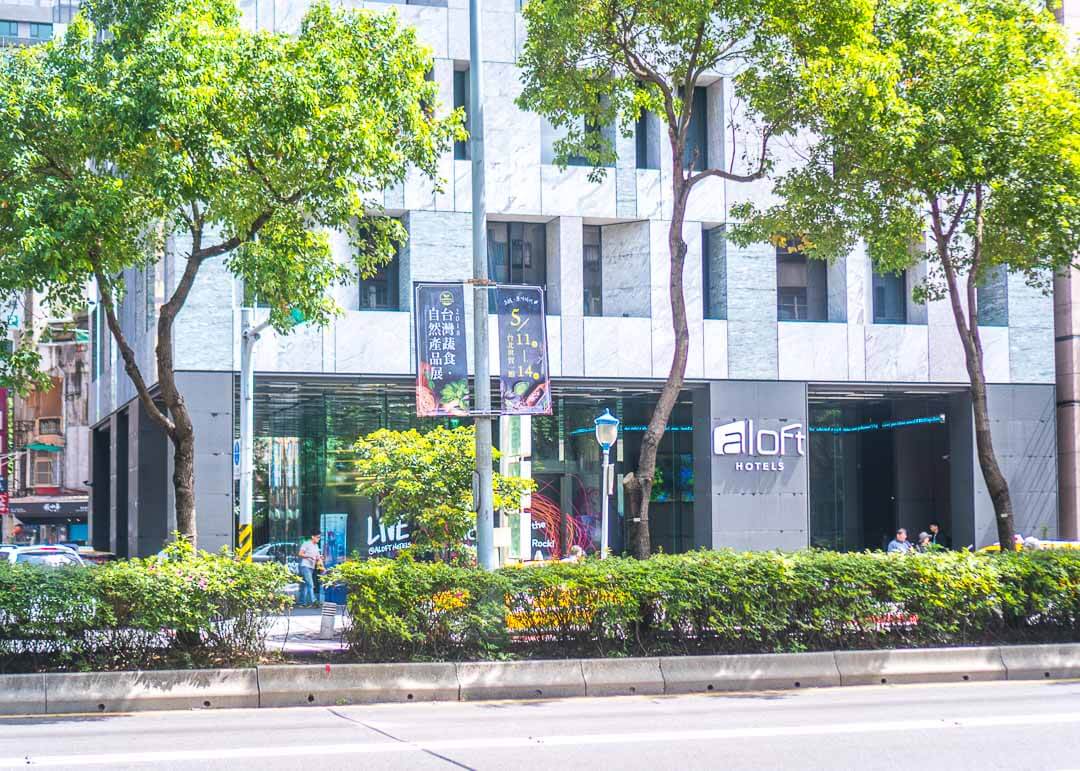 Zhongshan is a very central location in Taipei which was a huge benefit for us. There are day and night markets in an alley a few steps away from the hotel which was nice. We needed to get laundry done at one point so being close to a laundromat was great as well. The area has a lot of good food places to try, including a vegetarian place and other good food in the vicinity.

This hotel is between two subways on different lines, which makes it super convenient to take the MRT.

As for safety, well it’s as safe as you can get in Taiwan. Honestly, the most significant risk in Taiwan is having a motorbike hit you, since they like to transition from road to sidewalk sometimes. 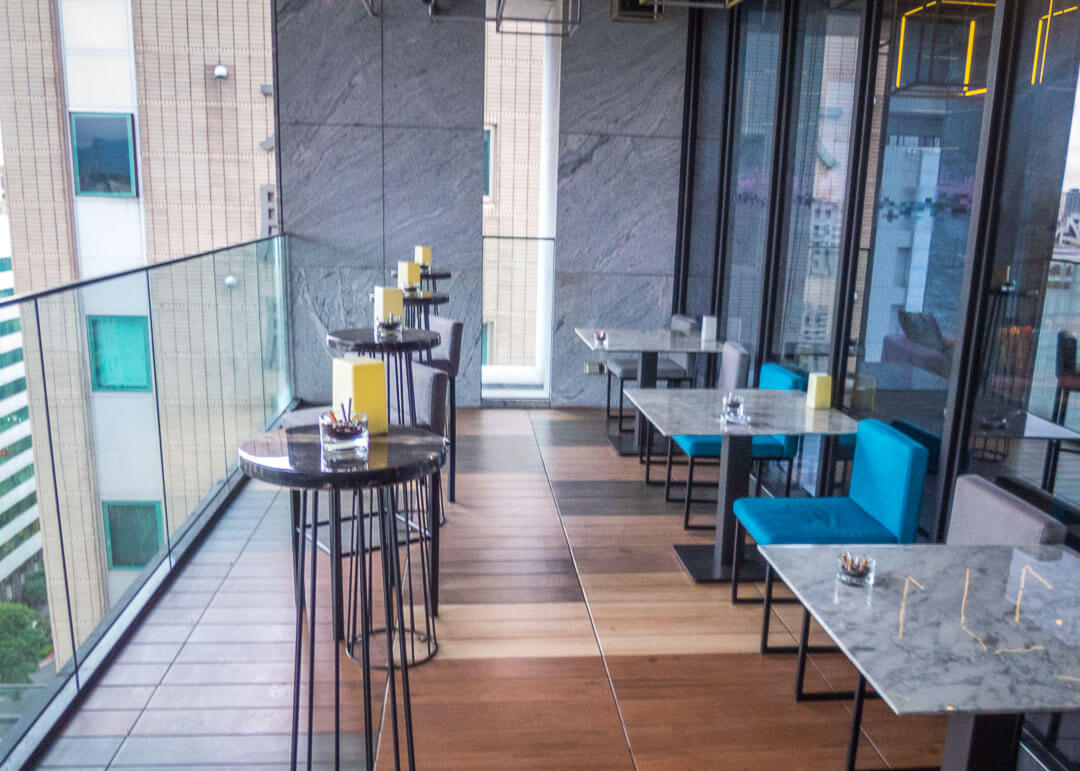 There is a large patio seating area in W XYZ bar

This hotel has a modern bar on the rooftop. There’s a variety of drinks to choose as well as snack menus and great music. 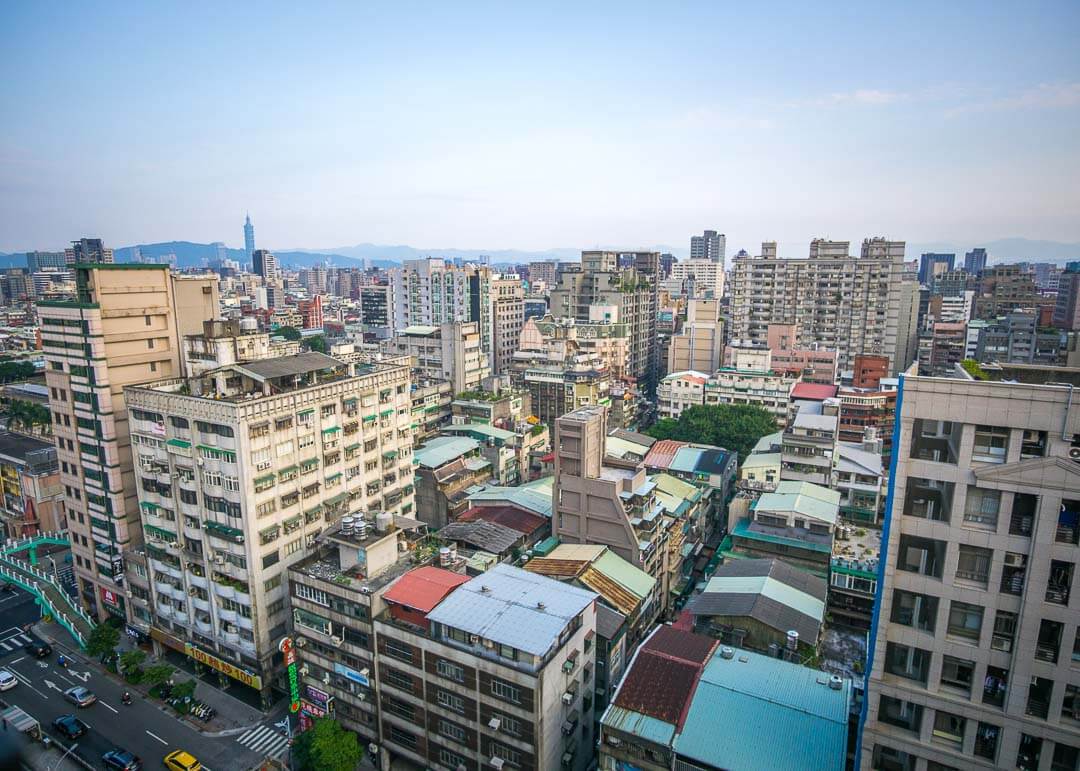 View of Taipei from the rooftop

The pool at Aloft Taipei Zhongshan

Unfortunately, since we arrived during the “colder” weather, the pool was closed for the season. It would have been a nice place to chill; you can even see planes landing at the Songshan airport. 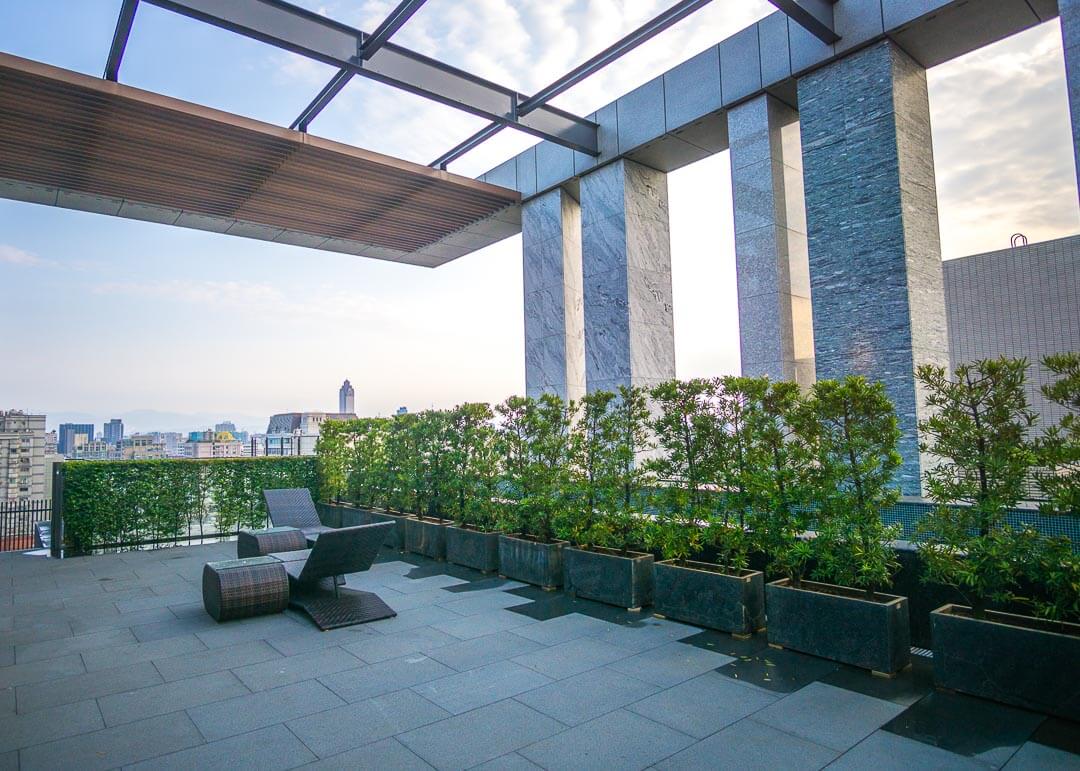 Since the pool is closed, this photo is the best one that I can take of the pool

Aside from the small hiccup, I loved my stay here and really missed it when we moved to Aloft Beitou. The location could not be beaten and made it super convenient to travel around the city. I would definitely stay again when I go back to Taipei.

Previous Post: « 10 Delicious And Cheap Food In Singapore You Must Try
Next Post: 11 Of The Most Useful Travel Tips For Seoul Korea »