You are here: Home / Travel / Our Experience At The Four Points By Sheraton Bali Kuta 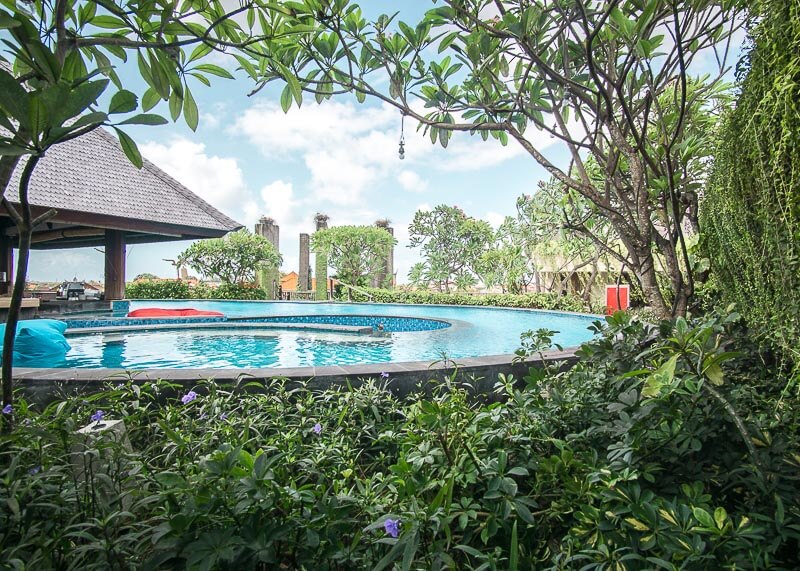 A huge part of travelling for a year involves actively managing a budget and staying in places. Achieving that balance meant making a few sacrifices, and that included staying in the not so desirable location in Kuta. Despite its infamous reputation, Kuta turned out to be ok for us.

Even though we were moving from one Four Points location to another, we had an inkling that the experience between the two hotels would be different. And we saw that immediately as our Blue Bird taxi pulled into the driveway of our hotel. Passing through security involved a guard using a mirror to inspect our vehicle. Afterall, he needed to ensure that there were no explosives or weapons hidden in the car…Crazy eh?

The ambiance of the hotel seemed pretty modern and hip. It was a lot bigger than the Four Points by Sheraton Bali in Seminyak and impersonal.

The Hotel Room At The Four Points By Sheraton Bali Kuta 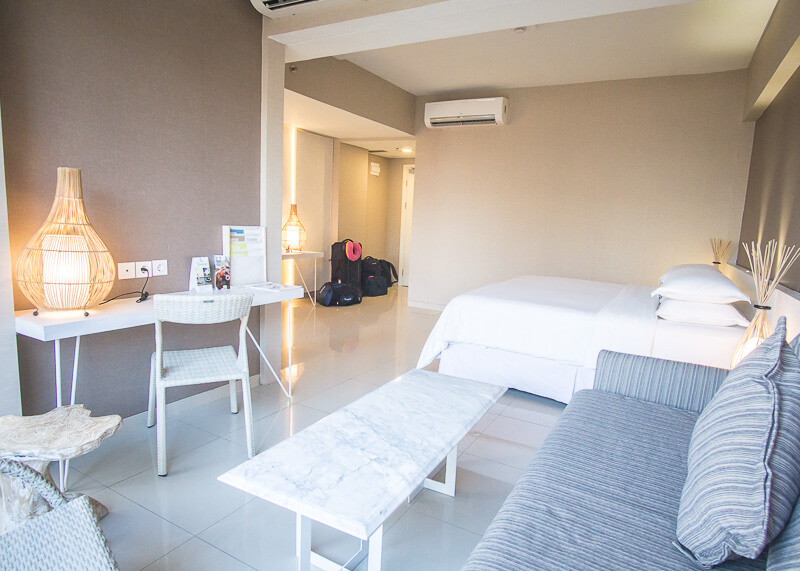 At first glance, the hotel room looked impressive. Everything was white, and the room was large. However, a closer inspection reveals that the hotel room is aging and there are certain things about the place that I wasn’t too keen on, namely the lack of lighting and the bathtub. Aside from that, everything else was good. It’s always nice to be in a large room, and it was quiet, away from the hustle and bustle of Kuta. 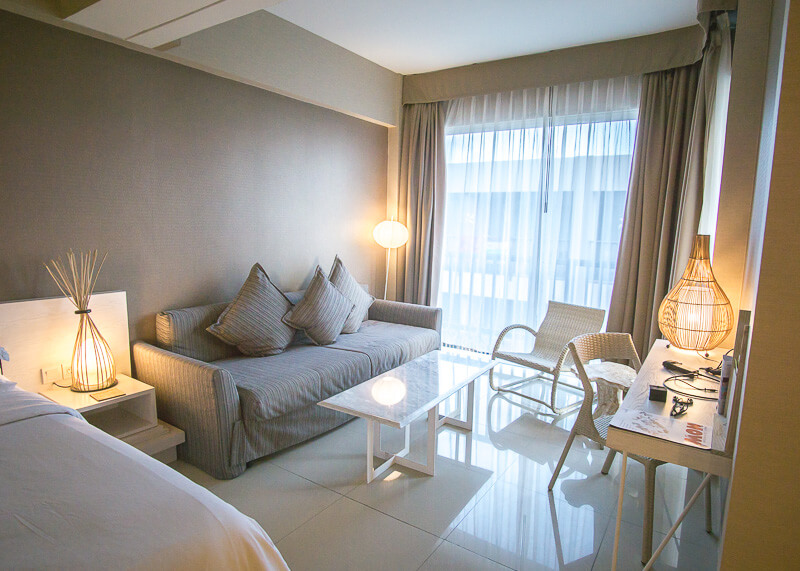 The living room and desk. The sofa can turn into a bed 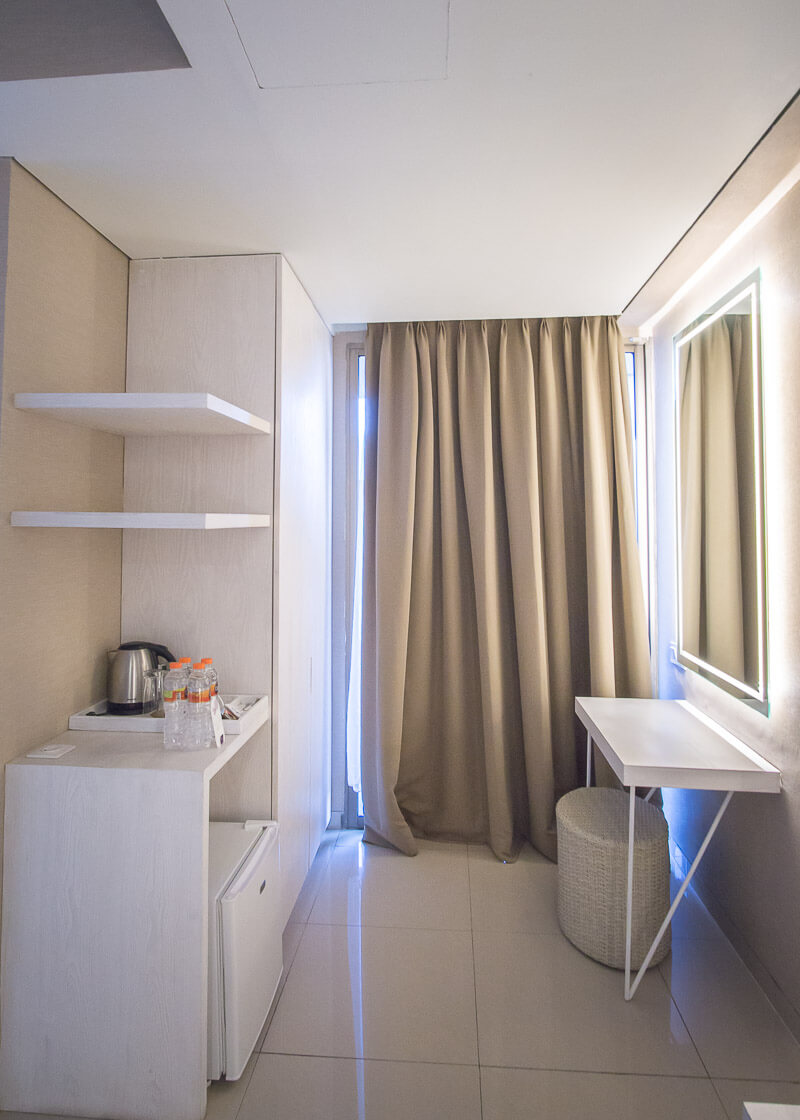 The balcony, mini fridge, closet and a small place to get ready 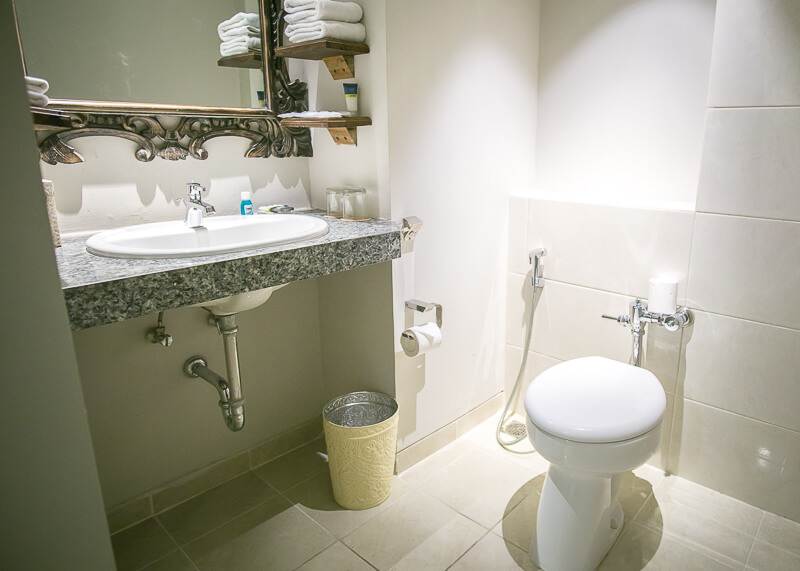 The bathroom with a bidet 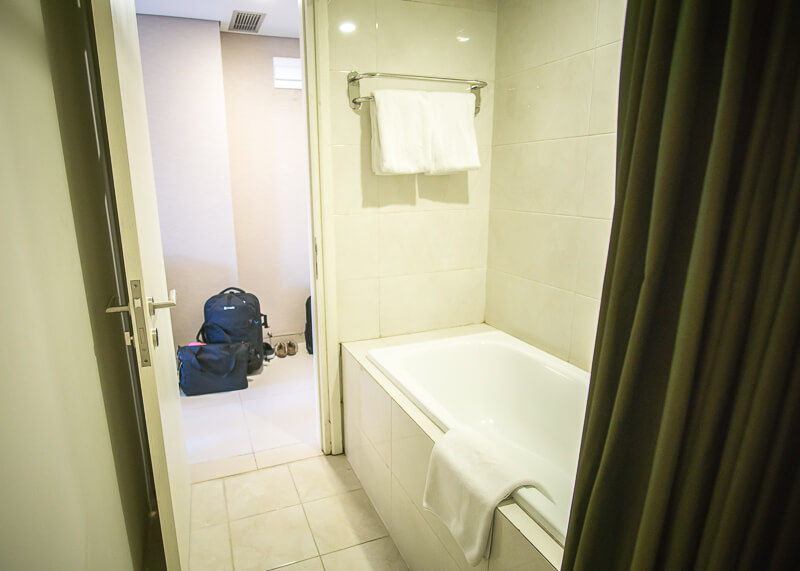 The bathtub. ‘Twas a struggle to get in

Every shower left the bathtub in a state that looked like there was a mini flood. The shower curtains did nothing, and I think the hotel is aware of the situation because there is a little drain right outside of the bathtub. There’s also not enough railings and I took quite a tumble one time on my way into the bathtub. The tub is far too high and there is nothing to grip on unless you’re holding on for dear life using the towel rack. I later learned that Gary ALWAYS held onto the towel rack for dear life before slowly inching his way towards the other end of the tub. Poorly designed big time and something to consider if you’re travelling with children or with limited mobility.

The Service At The Four Points By Sheraton Bali Kuta 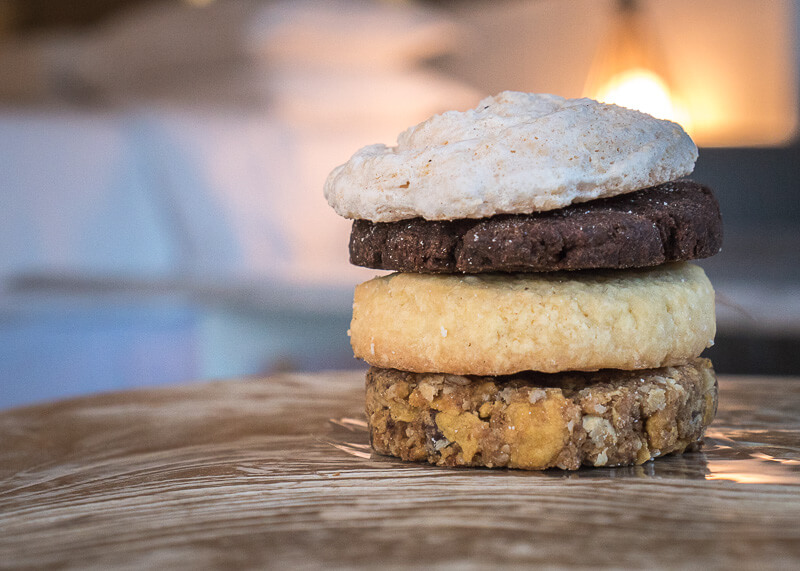 Welcome cookies on our first day, which we devoured in less than 10 seconds

The service was ok, but not that great. In fact, it was quite frustrating at times. I mean the hotel is so large that it’s hard for them to deliver on customer service, and I guess it’s just a Four Points so you can’t have any expectations. 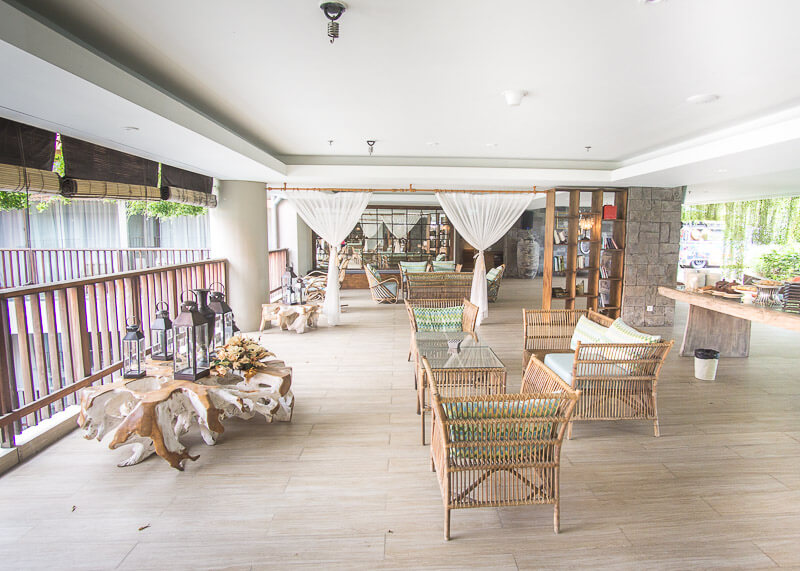 Lots of seating area around the hotel

When we checked in, we had two pretty Balinese ladies dressed in traditional dresses put a flower in my hair and offered me a mango popsicle. I was immediately impressed by the level of sophistication.

The lady who checked me in was friendly and courteous. Everything was great except for the fact that she keyed in the WRONG SPG number and caused me so much grief! I was locked out of my account because of this typo and had to call the SPG hotline to have it fixed. It was a pain, considering how I wanted to book our stay in Kuala Lumpur using cash and points and needed to do so before it was too late. 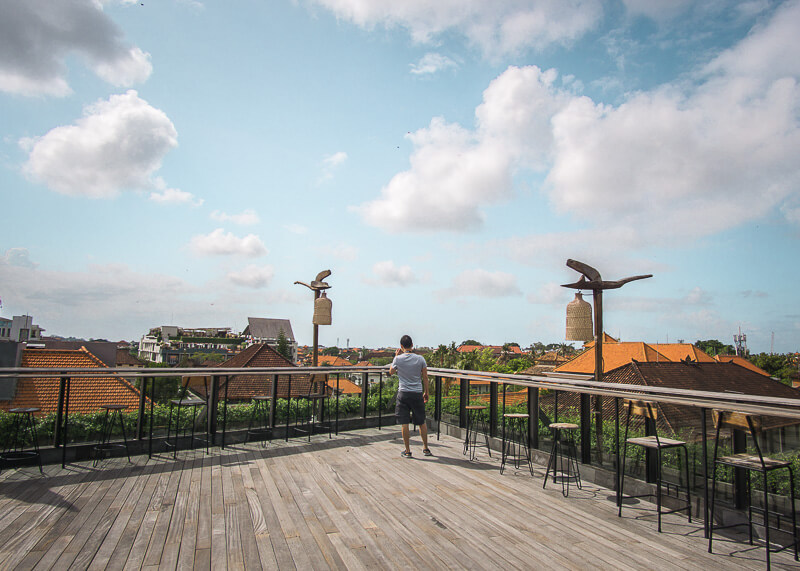 Impressive views of Kuta Bali from the rooftop

I do feel for her though and wonder if the crummy service at the Four Points By Sheraton Bali Kuta is a reflection of the location, rather than the hotel itself…

While I was being checked in, two different groups of guests kept interrupting us and giving the staff member a hard time. Even though she was still helping me, another guest kept barging in saying “this hotel room is not good, give me another one” and kept pushing the keys to her hand while she was serving us. I glared at the guy on her behalf, but he still charged forward with his demands.

To my right, another guest was doing the same thing to another staff member by trying to get her to change the room for what sounded like the third time! It seemed like they were trying to get an upgrade. So rude, even the most patient people will get worn down over time.

Security guards patrolled the premises at all times. And when it comes to exchanging money which is a bit of a challenge in Bali, we’d have our backs covered even though we were off the property. The receptionist recommended a particular money exchange location and said that if we had issues, we can call the security at the hotel, to which they would come by immediately and help us. They said those money exchange guys know not to do any “funny business”, especially with Four Points customers.

You can read this post here on money exchanging scams in Bali.

The other nice gesture came when we cabbed back one time and didn’t have small bills to give to our taxi driver (always carry small change, around 50,000 IDR for cabs). Immediately, the staff member went to the back and grabbed us change so that we can pay for the taxi. That was nice.

The other thoughtful gesture that we appreciated was when our driver came to pick us up to take us to our next destination in Bali. Sukawati is a lesser-known area (think, a hidden gem with NO CROWDS!) and our next hotel was new, so that cab driver wasn’t sure about the directions. The staff members talked to the driver in Balinese to make sure that he was taking us to the right place. 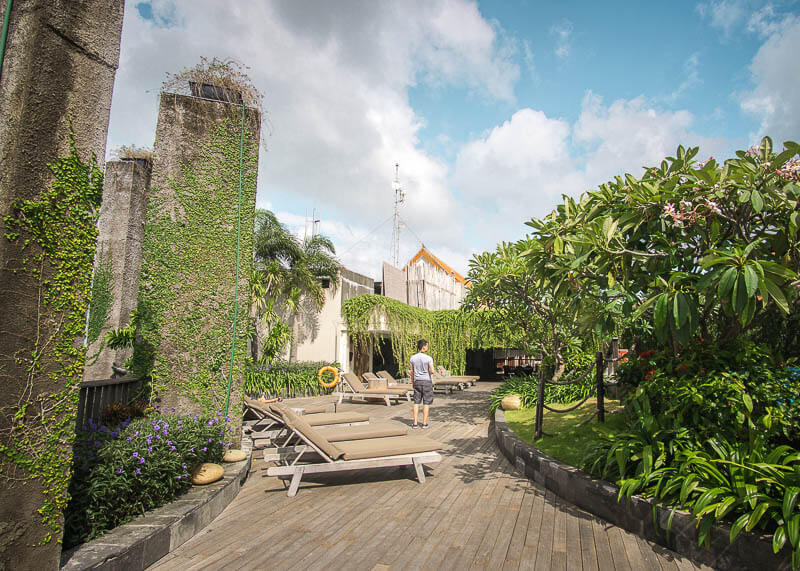 The location At The Four Points By Sheraton Bali Kuta This Kuta Bali hotel was in a pretty central and convenient location. Great area to walk around and relatively close to the beach

The location of the hotel is pretty central as it is located next to the Jl. Legian Kaja street and close to the beach. There is a shuttle bus that drops us off at the Beachwalk shopping mall which was convenient for grabbing food and hitting the beach. Although the walk to the beach is much faster and about a 15-minute walk.

The hotel itself is in the middle of a very narrow street; I’d probably say it’s more akin to an alley. There are lots of local warungs to eat at, although I gotta warn you, I got Bali belly from one restaurant, and we saw a rat run through the open air kitchen of another warung. I lost weight thanks to these two incidents. 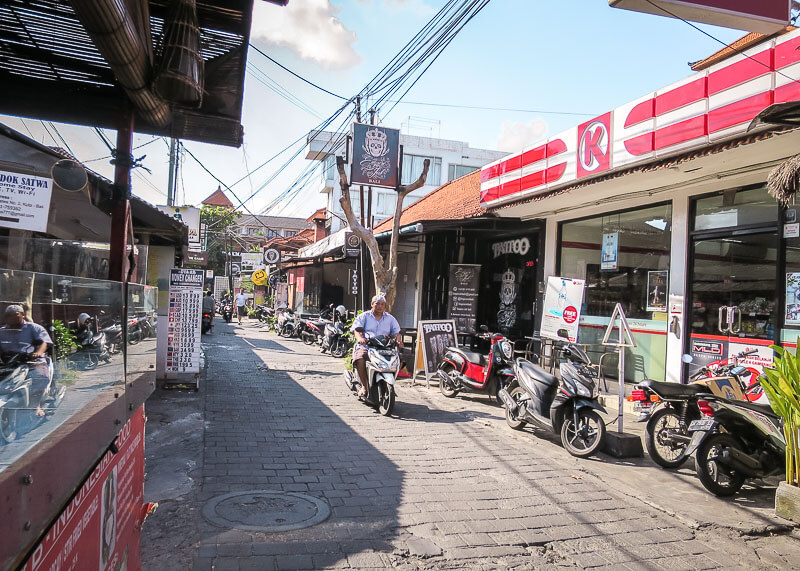 The narrow street that leads to the hotel

It is also close to one of the Kura Kura bus lines, which we used one day to make our way to Ubud when we trekked our Campuhan Ridge Walk.

The area around the hotel felt safe to walk home at night thanks to the many security guards on most corners, but I’d still caution you to be careful, not carry a bag if you can (especially if you’re female) because there is a big issue with bag snatching in Kuta. Almost none of the foreigners we saw carried bags when walking.

The Facilities At The Four Points By Sheraton Bali Kuta

This Kuta Bali hotel is quite large and had a few dining places in the hotel, as well as lots of seating areas and pools. There are three pools in total, one dedicated to kids right next to the kids’ zone. Suffice it to say; there were lots of family with children in this hotel. Of course, we explored the area and didn’t have the chance to eat at the hotel, but felt there were a lot of good food options for those who did choose to eat in at the hotel. Prices were quite reasonable, and we saw that afternoon tea was just 99,000 IDR (About $10 CAD or $8 USD). 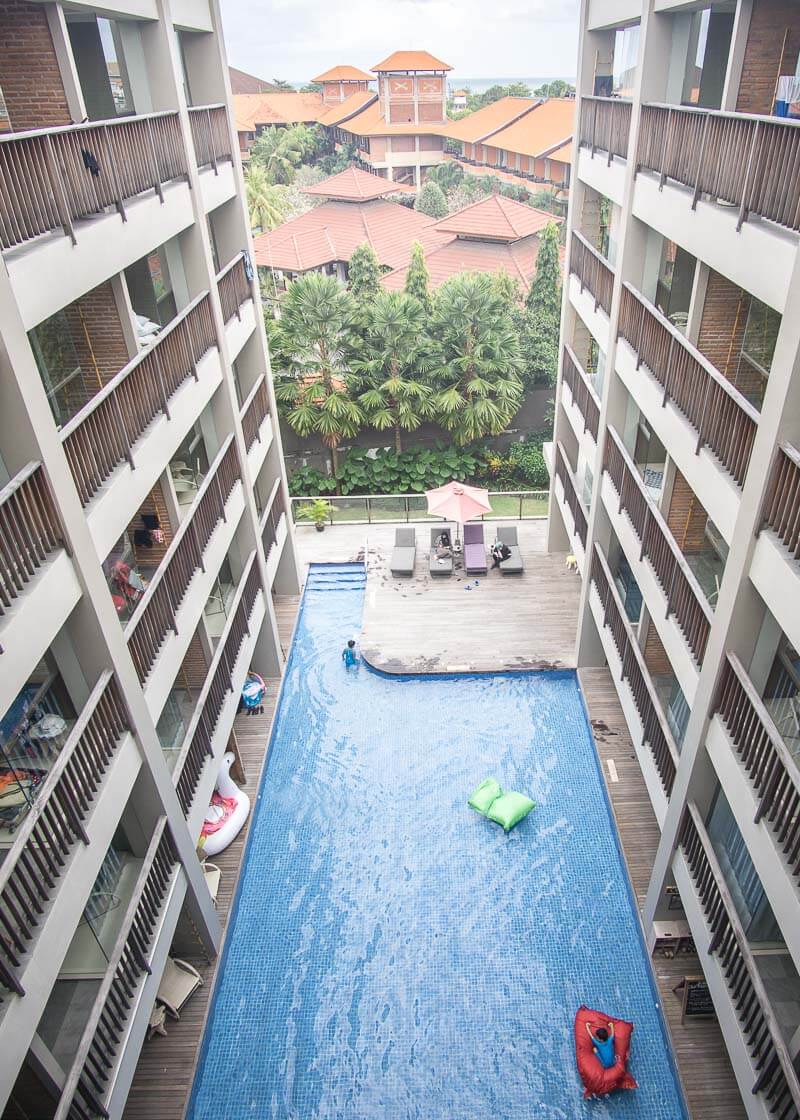 The huge kiddie pool with a view

The Swimming pool at the Four Points By Sheraton Bali Kuta 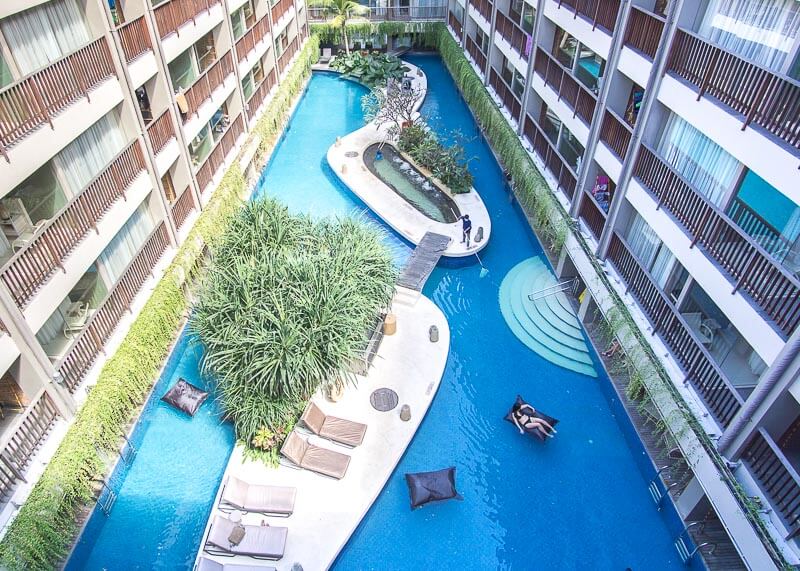 “Float with the tide, or swim for the goal” – clearly floating through life here and enjoying the moment

The best part of the hotel was the jacuzzi and the large swimming pool. Most times, there weren’t many guests at the pool, so it never felt crowded.

There was another pool on the rooftop right next to the bar, which would have been nice for those who wanted a drink while chilling in the pool. 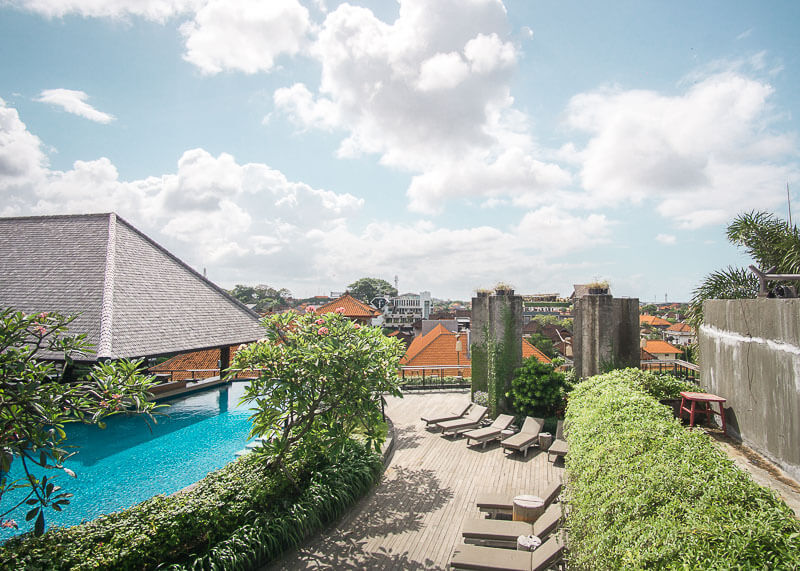 Another swimming pool at the Vertigo Rooftop Pool & Bar 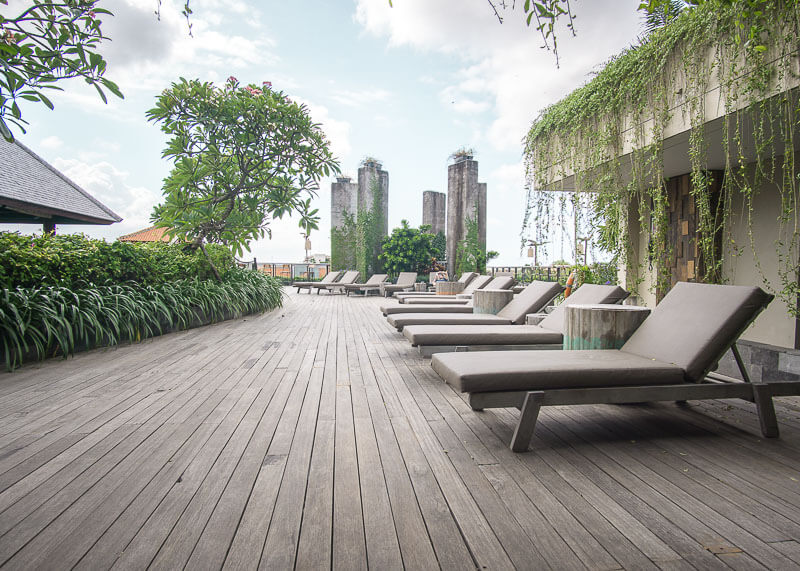 So many lounges to chill on at the hotel’s rooftop 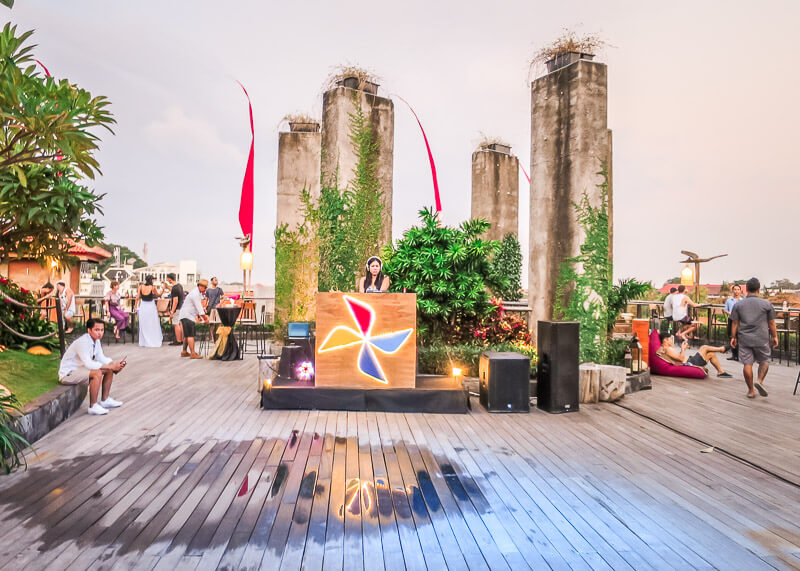 The Gym At The Four Points By Sheraton Bali Kuta 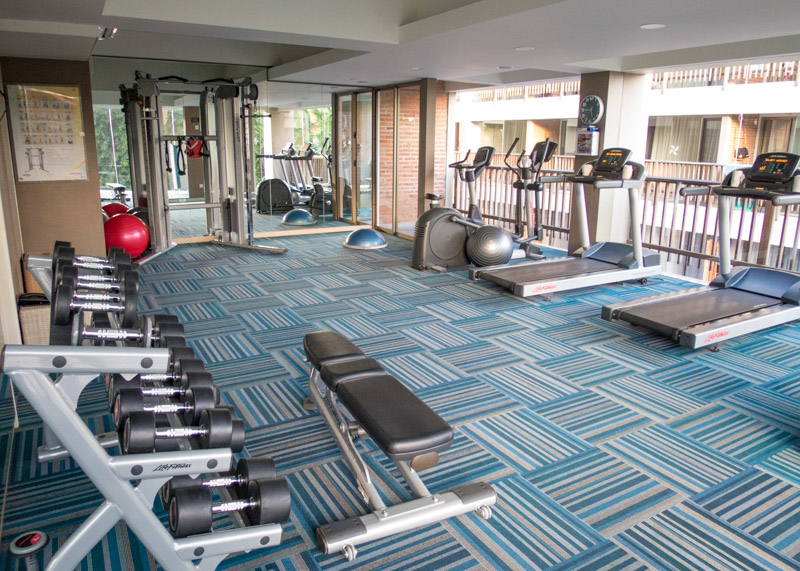 The verdict on the Four Points By Sheraton Bali Kuta? 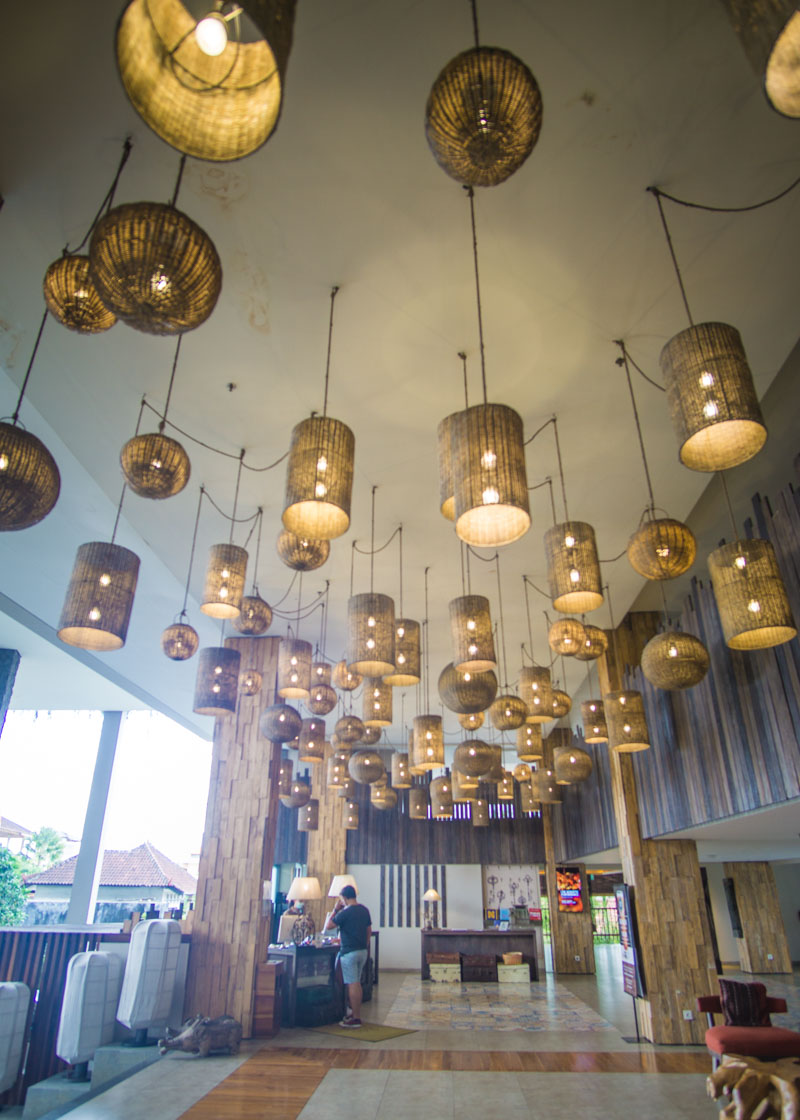 The lobby of the Four Points by Sheraton in Kuta Bali

Overall, the Four Points By Sheraton Bali Kuta was a good stay. Aside from a few hiccups that I mentioned earlier, it was a decent stay for the price and location and I definitely felt like we got good value for what we paid. Of all the places we’ve stayed so far, this hotel has one of the best pools for guests. 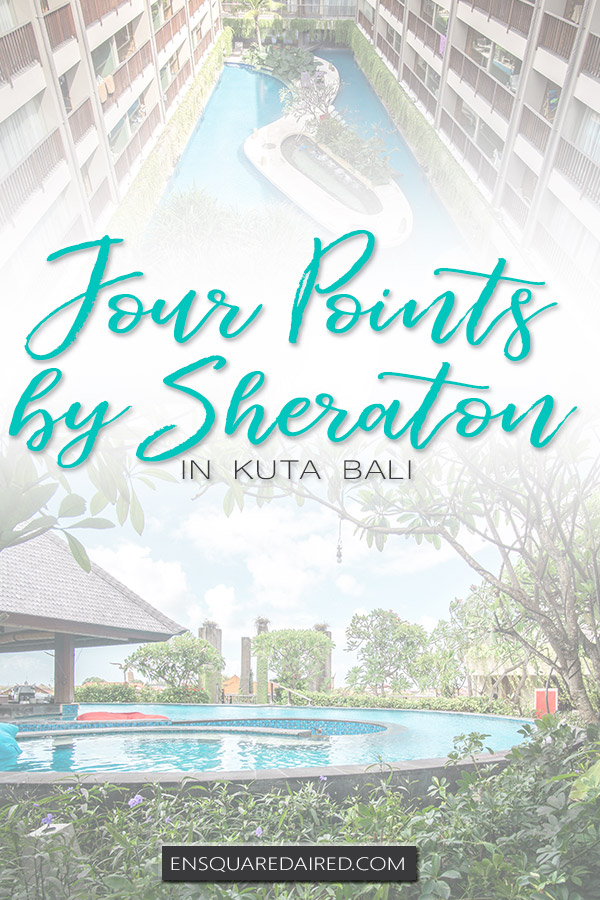 Previous Post: « What Happened When I Met The Founder Of Makerspace
Next Post: How To Get From Chiang Mai To Bangkok By Train »