You are here: Home / Destinations / Mysteriously Yours, A Fun Night Of Murder And Confessions 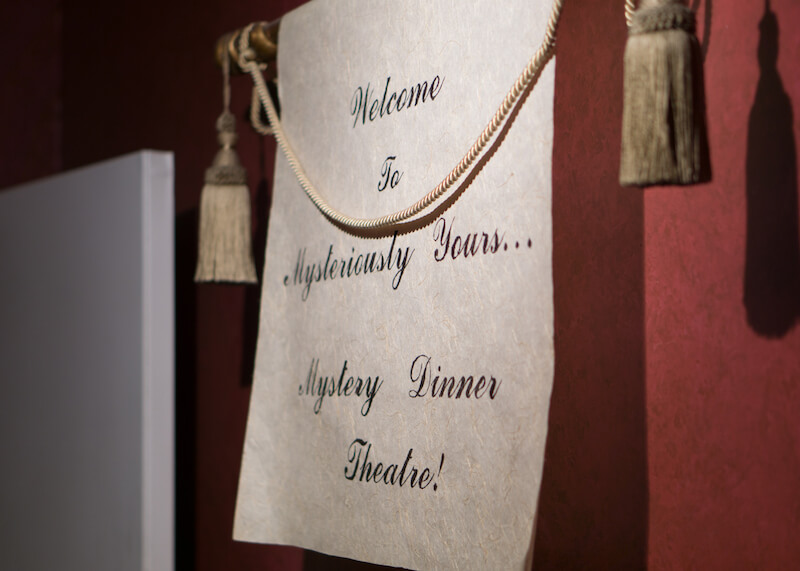 Mysteriously Yours, a murder mystery dinner theatre in Toronto since 1987

Here’s an interesting fact about Mysteriously Yours. This murder mystery dinner theatre is one of the world’s largest producer of interactive murder mysteries since 1987! Cool huh? At first glance, the show does look a bit tacky, but oh, my friends, it makes the show more charming because it is hilariously funny!

This post was written in collaboration with Mysteriously Yours

Seating arrangements and nametags at Mysteriously Yours Dinner Theatre

When you first go in, you’re asked to write down your name on a nametag. Why do I need nametags, you might ask. You’ll understand later. It’s very interactive, and they might call you out sometimes too. 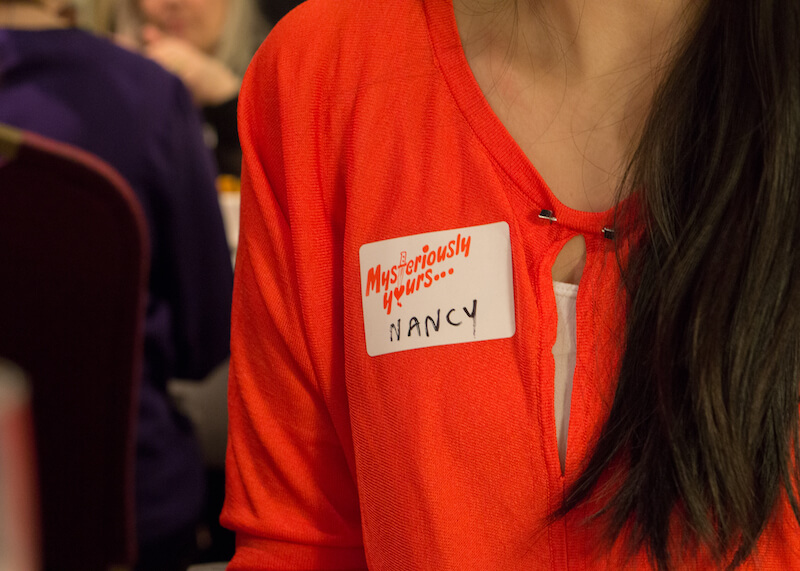 In fact, if you’re attending the event for a celebration, you will get a speaking line. So prepare for your 15 seconds of fame.

Our table had six seats and a reserved seat. We were at table 8 which was two rows away from the main stage. At first, I was happy to be close to the stage, but I quickly learned that it didn’t matter where I sat because the stage is rarely used. There aren’t any bad seats in this venue; you’ll feel involved in the show, and you’ll be laughing your head off. 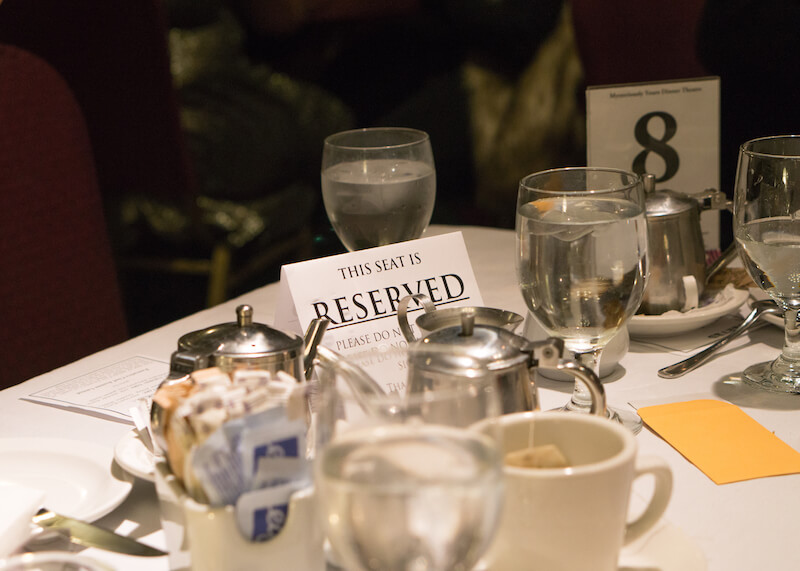 The venue had a wedding feel because we sat with strangers. The seating arrangement and dinner allowed me to get to know the guests I was sitting beside. The family at our table shared stories about their native country in Guyana and adventures in their lives. They were around my parents’ age, so they had decades of stories to share, which I loved hearing.

The food at Mysteriously Yours Dinner Theatre

A quick read through online reviews show some mixed reviews about the food. However, I don’t think the food is as bad as what I read on Trip Advisor and Yelp. At some point, Mysteriously Yours brought in Jo Lusted as the executive chef, which seems to have brought the quality of the food up a few notches.

The food arrived very quickly. Within ten minutes of putting our order, our appetizers arrived.

Appetizers at Mysteriously Yours Dinner Theatre 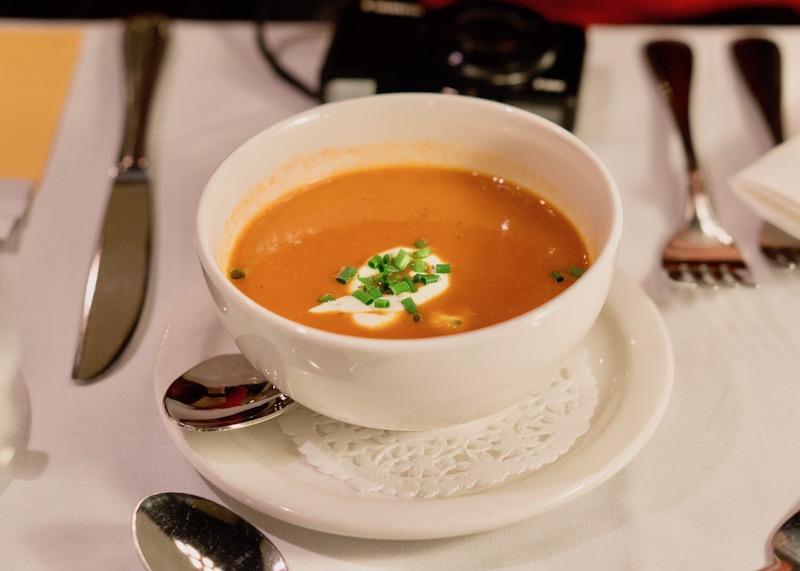 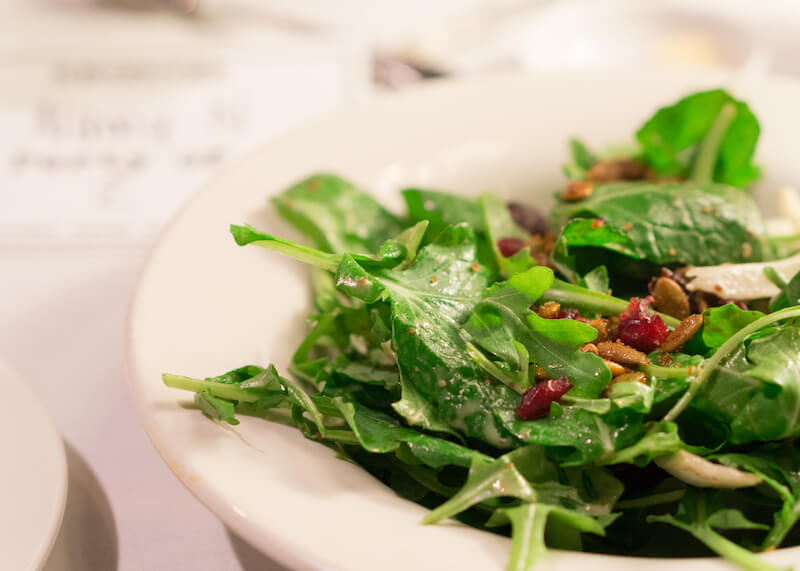 The service of the food felt very wedding style, where the food was likely prepared in advance. 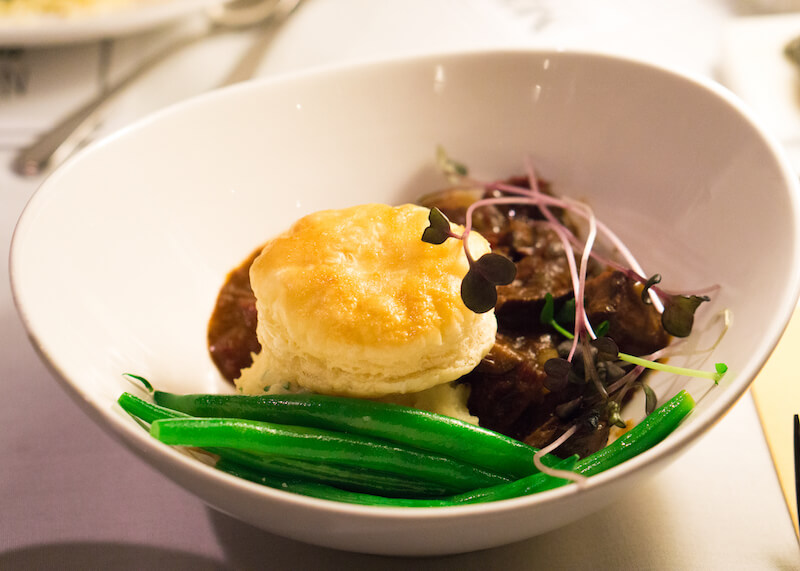 There was a drink menu, which looked pretty standard. I like to drink plain water when eating so I skipped the drinks. 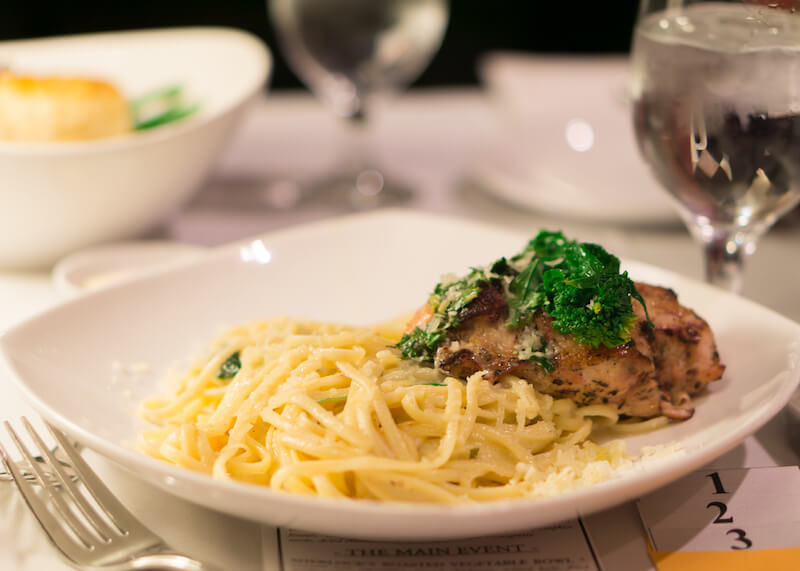 While I found the food to be, so-so, Gary enjoyed the food and ate his meal and mine (Keep in mind that I’m super picky about food). Everyone else at our table enjoyed the food, and there were no complaints at all.

You can’t have crazy high expectations about the food because the dinner is served in a wedding-banquet style. I mean there were close to 200 people in the room, and the venue was serving a three-course meal within a span of 1.5 hours. Therefore, it’s better to have realistic expectations when it comes to the food. If food is important to you and you have high standards for food, let it be known that dinner is optional. 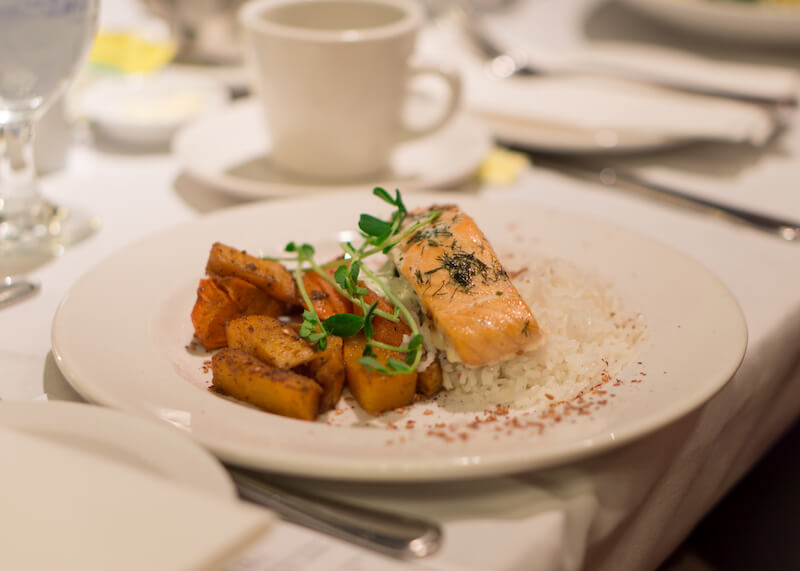 Desserts at Mysteriously Yours Dinner Theatre 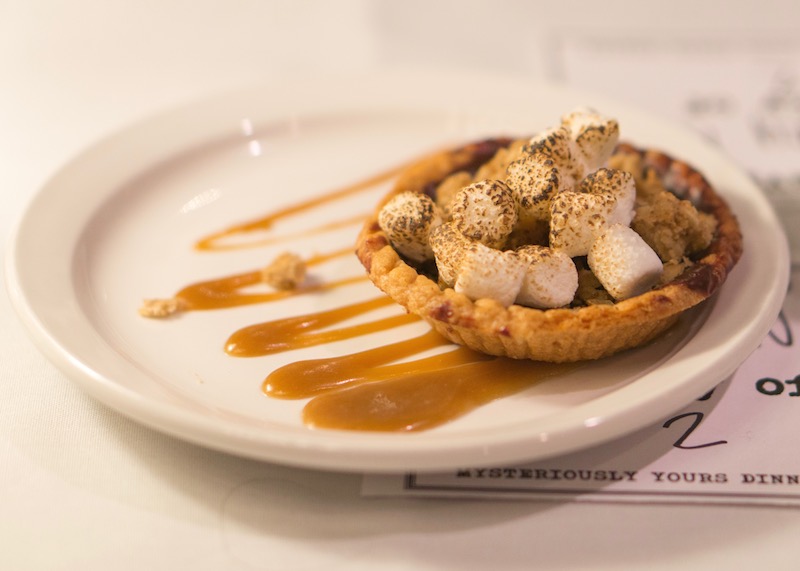 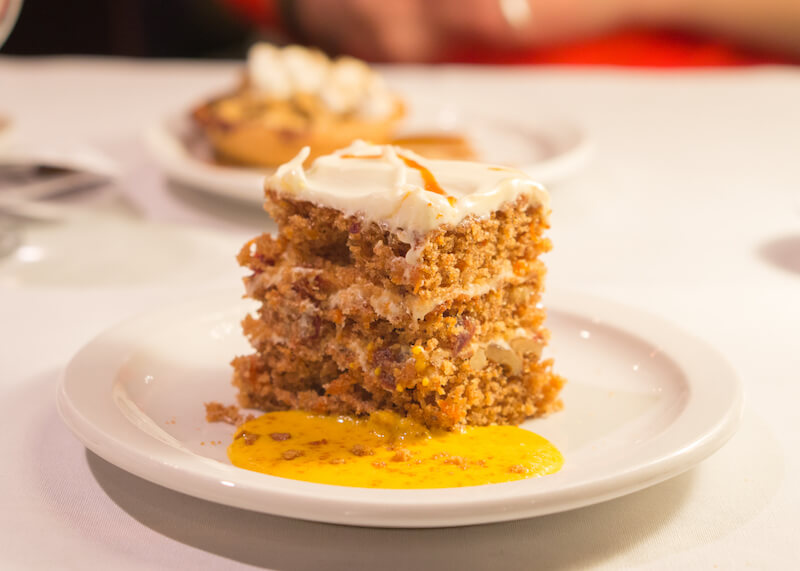 Miss Marble’s carrot cake, with walnuts & cream cheese frosting. No idea what that yellow sauce was. It was one of the night’s mysteries for me

I didn’t realize until later that this time was also for the characters to give lines to some of the guests. It was a bit confusing at first because the scripts seemed very random. I secretly wished they wouldn’t give me a line because I’d shrivel if I had to speak in front of strangers. I realized later that these people were “special” and had a script because they were there for a celebration.

Murder by the Books

Mysteriously Yours changes up their shows and releases new murder mysteries every few months. The show I attended was called Murder by the Books (Spoiler alert: No one dies from getting beaten by books!).

Interaction with the audience at the Mysteriously Yours Dinner Theatre

The actors all took their time to come around each table to engage in conversation with guests.
Miss Marbles was the first character to introduce herself at her table. It was a bit confusing at first because I didn’t know how to interact with her… I mean, I wanted to tell her how much I loved her outfit, but I wasn’t sure how to address her… 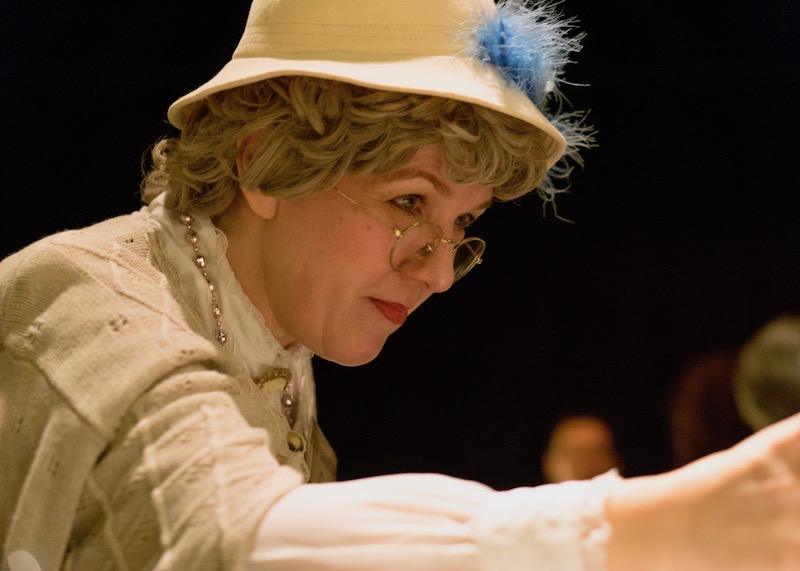 I suppose the socially awkward girl in me had no idea how to speak to Miss Marbles, so I just smiled, said hi and quietly snapped photos of her. Mind you; this is my first time interacting with characters in a show in this way. 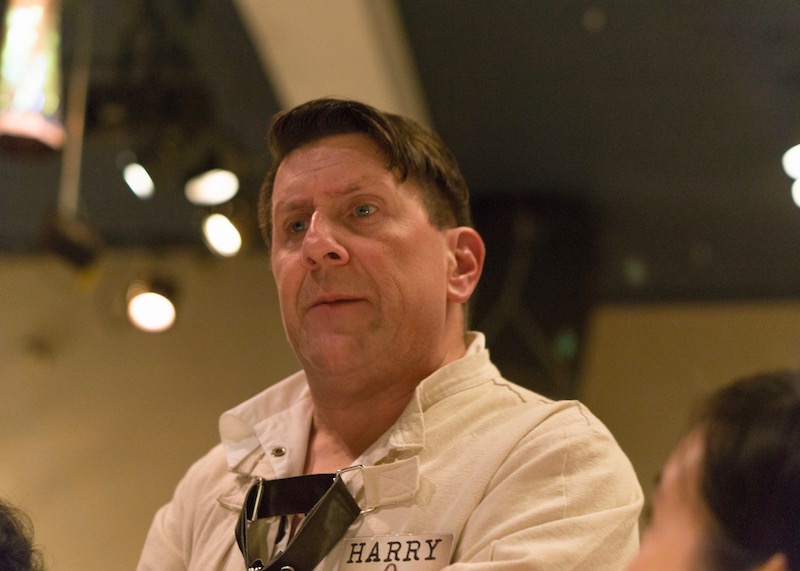 The show was highly interactive, and the characters did well in engaging the audience. As I watched the room, I saw that every guest had a smile on their face throughout the night. The actors and actresses were just soooo funny! The characters cued guests to make sound effects, which kept a high engagement level. As well, I felt connected to the characters, something I would not have experienced had it been a traditional stage performance.

The talented actors and actresses at Mysteriously Yours Dinner Theatre 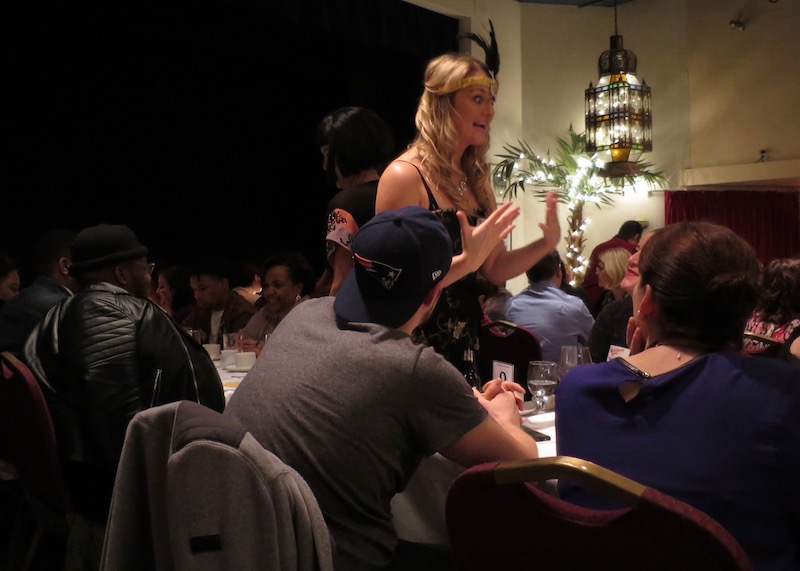 Even though there were close to 200 people at the show, none of the characters used microphones on the play. Despite the large room and crowd, never once did I feel as if I could not hear or see what was happening. 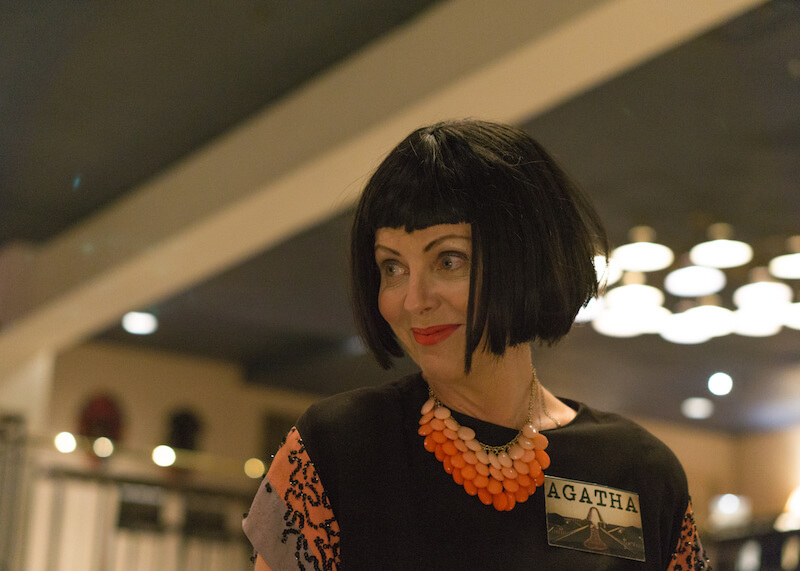 The actors and actresses are very talented and professional. They all had exceptional improvisational skills and were quick to react to each other with funny lines. Their performance makes me want to take improv classes because thinking quickly on one’s feet is a useful life skill.

Do you want to win prizes at the Mysteriously Yours Dinner Theatre? Keep your menu (and take notes)! 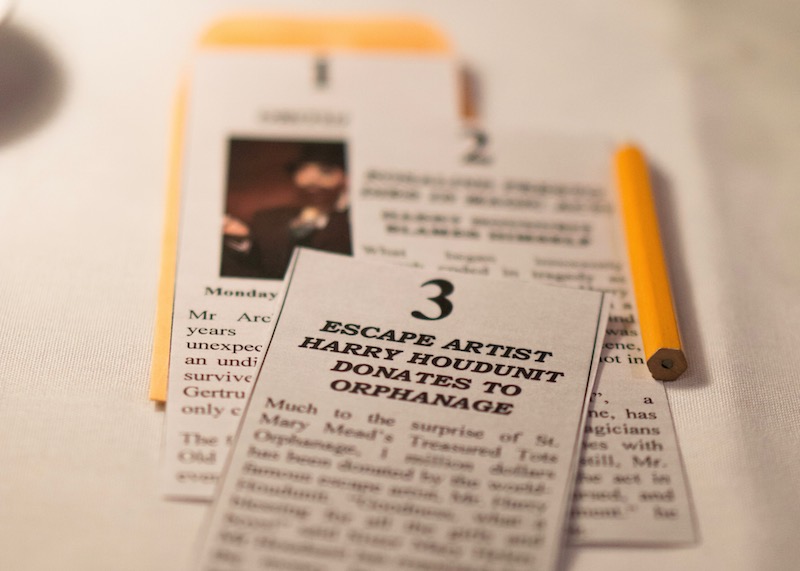 Here’s a tip for anyone who likes winning prizes. There are prizes at the end of the show for anyone who correctly guesses the name of the murderer via a raffle!

If I could offer a tip, don’t be like me and spill soup all over your menu! The back of your menu serves as a place where you can write clues that you get when you interact with the cast.

Our table didn’t pick up that we were supposed to take down clues until Watson told us about it (thank you, Watson). By then, we met most of the cast and didn’t write down the clues that we should have written. 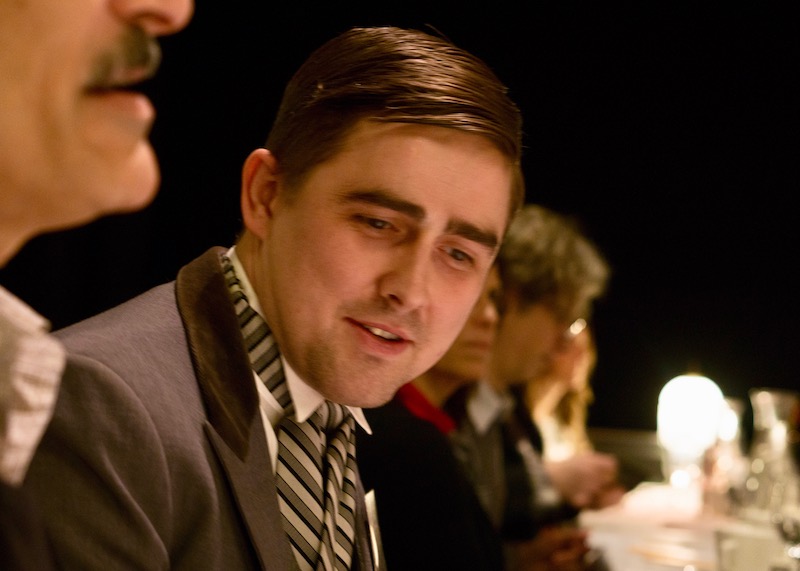 That’s why there’s pencils and bits of paper, for you to write the clues! Duh!

Birthdays and celebrations at Mysteriously Yours Dinner Theatre

At the end of the night, the characters called all the names of the guests who were part of the show and acknowledged their birthdays/celebration.

After all the special guests had their names announced, Sherlock started to act funny.

Sherlock randomly called out a girl and began to flirt with her in front of her date! 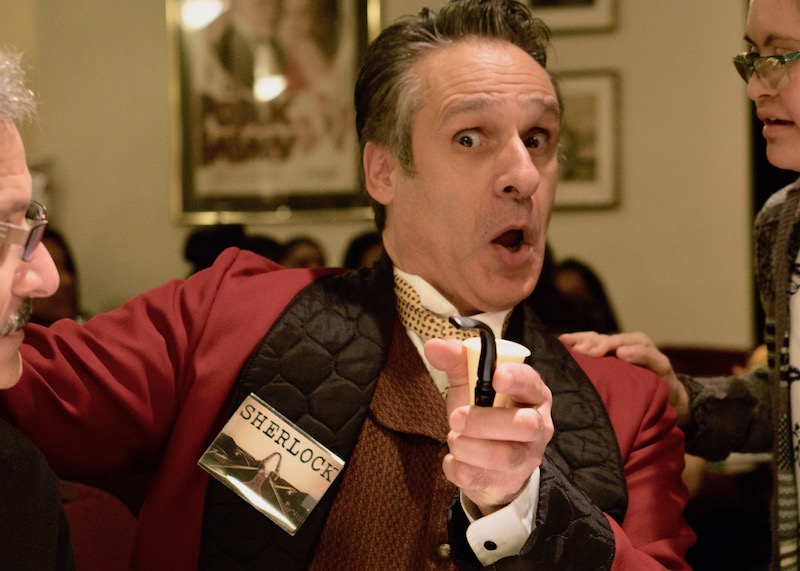 Sherlock: I noticed you had your eye on me all night. I think something is going on between us
Girl: *looks embarrassed*
Sherlock: *Looks at the girl’s date* What? Am I ruining something here?
Girl’s date: * stands up * Back off, that’s my girlfriend!
Sherlock: Ohhhhh do you have something to say?

At this point, the men in the audience seemed to pick up what was about to happen. I sure didn’t… I thought he was going to fake strip again (the date was a stripper during the show).

But no, the guy looks at his girlfriend, gets on his knees, and proposes to her! 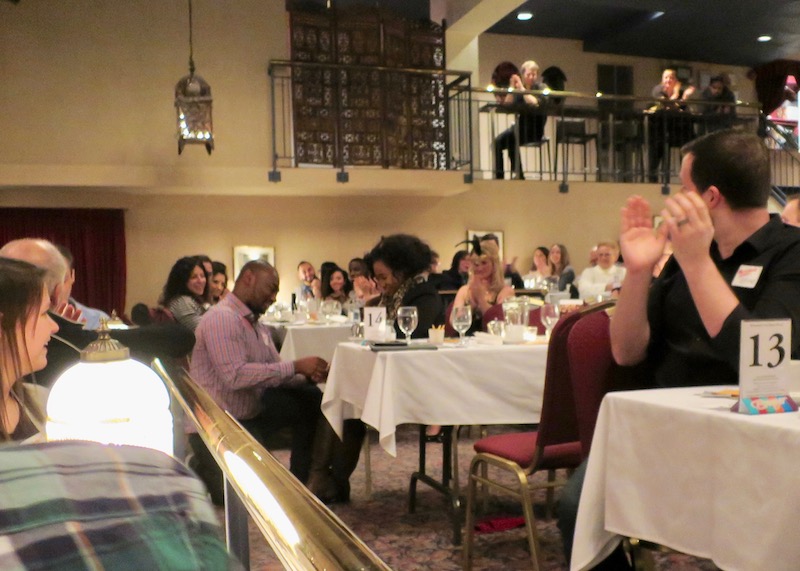 The crowd gasps with surprise as he proposes to her! At some point, the room became completely silent as the guy starts to do a proposal speech. It was interesting to see how quickly the room quieted down to not ruin his moment. And you gotta give props to the guy; his speech wasn’t a short “hey, marry me, thanks bye.” He delivered a speech to her in front of everyone! Kudos to this guy because he essentially had to wait for over four hours before proposing to his girlfriend! 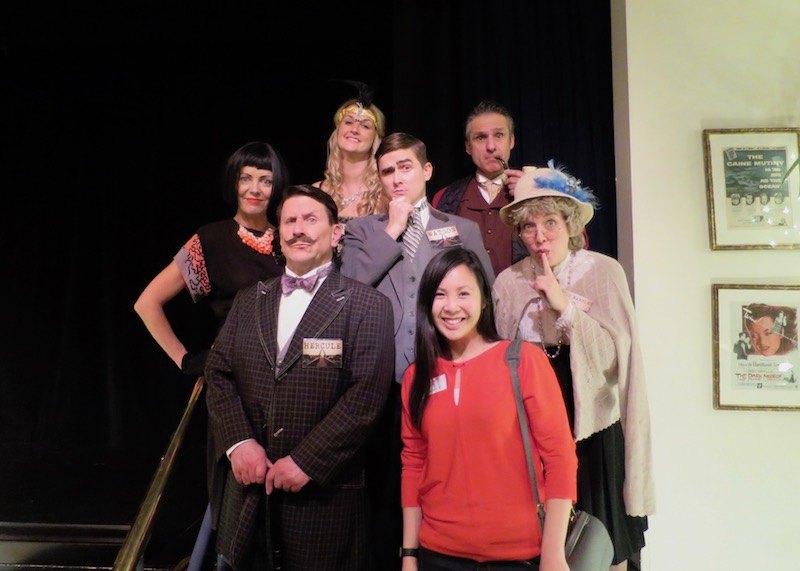 Me with the amazing characters from Murder by the Books

In this day and age where technology allows us to create amazing sound, light and image effects to enhance a show, Mysteriously Yours used very little technology. In fact, there was nothing but talented characters that made the show so amazing. They say laughter brings people together and that’s exactly what I observed that night. It was nice to see people from different generations bonding over the meal and laughing at jokes from the show. I’ve lived in Toronto for over a decade, and I have to say, it’s rare to be an event where strangers bond with each other in this way.

I want to say kudos to Mysteriously Yours for the incredible experience I had with this show. I understand now why this show has been around for over 30 years. 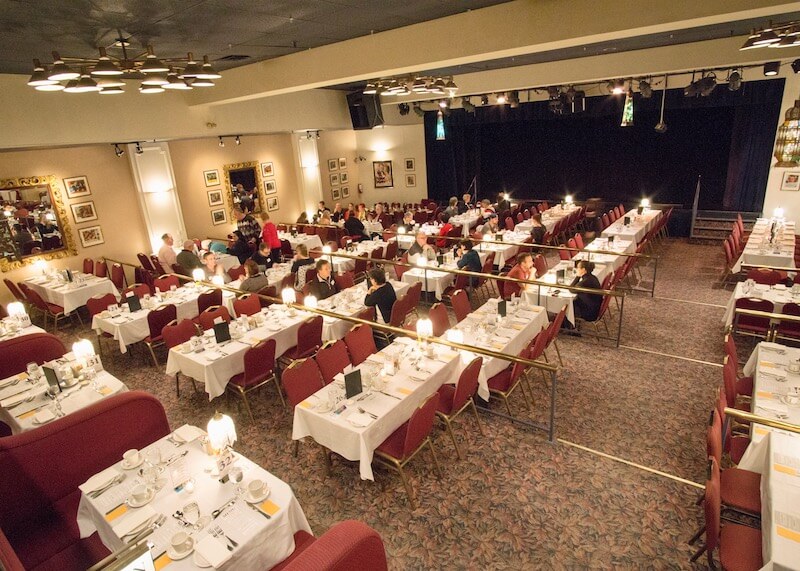 Mysteriously yours, before the show has started 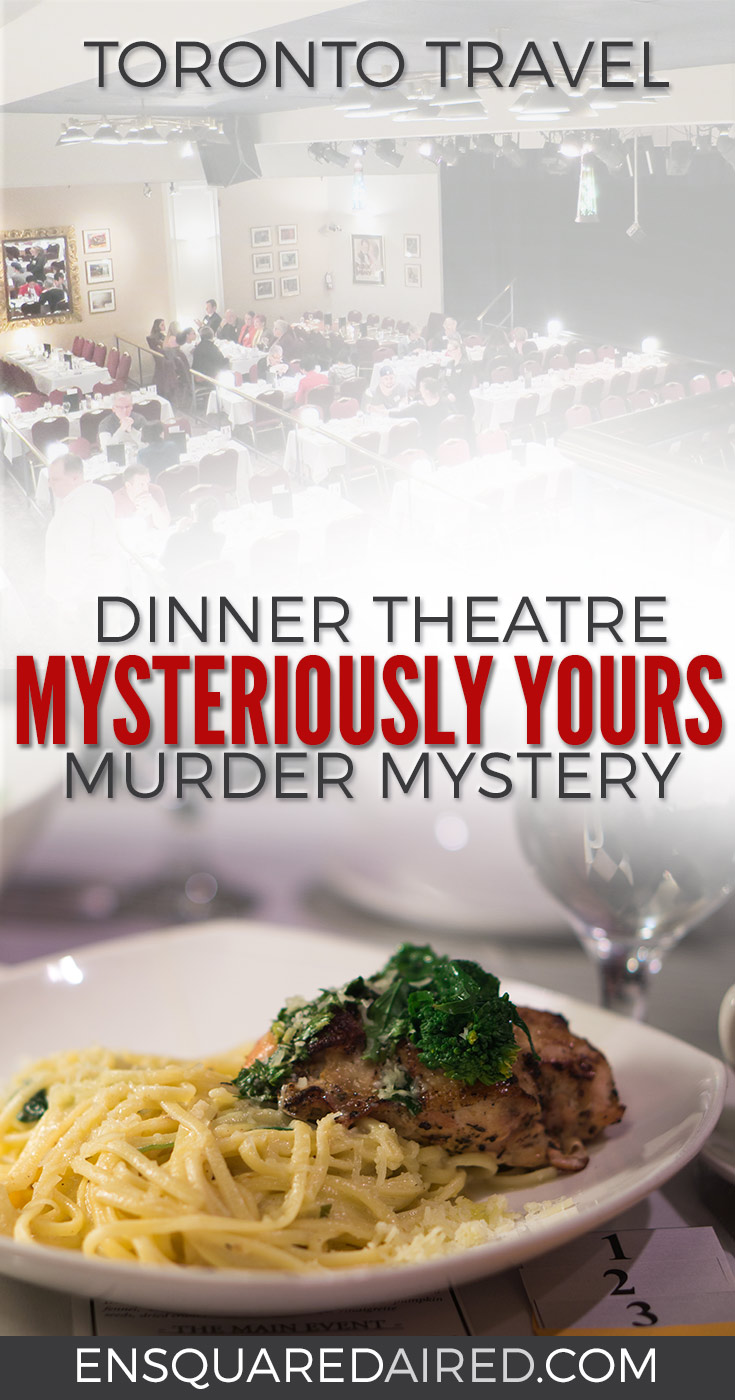 9 Things To Do At The Toronto Distillery District Christmas Market

Win Tickets To The Outdoor Adventure Show In Toronto!

9 Things To Do At The Toronto Distillery District Christmas Market

Win Tickets To The Outdoor Adventure Show In Toronto!